A straight man has revealed how he married his gay best friend to avoid a hefty inheritance tax bill, and inists his late husband would be ‘proud’ of new documentary about their tale of tax dodging.

Matt asked his friend of 30 years and carer to marry him because he wanted him to inherit his house in Stoneybatter, Dublin, when he died – seeing it as a way of paying him back for looking after him in his twilight years.

The pair even argued that due to the fact Michael cared for Matt without taking a Carers Allowance, they saved the state money.

When couples marry in ireland, they face an interview to ensure the marriage is not a sham, but a legal expert say that there does not need to be a sexual or romantic element to the relationship to make it a ‘genuine’ marriage.

‘There can be no question of the marriage being a sham. In short, the marriage is a marriage. The fact that it is platonic, and without a sexual component, is, as a matter of long-established law, neither here nor there and in truth no concern of the judges or of the state … A sexual relationship is not necessary for there to be a valid marriage,’ said retired judge Sir James Munby.

Sadly Matt passed away in January last year following a short illness, and Michael said his late husband would have loved the spotlight being on him, reports the Irish Sunday Mirror.

The documentary called Let the Rest of the World Go By – a tribute to the song Matt sang at their wedding – which aired on Ireland’s national TV station RTE One last night, shares a touching insight into the men’s relationship.

In it, Michael affectionately brands Matt ‘bitchy’ while Matt admits he could ‘strangle’ his ‘hubby’ at times.

Matt retorts: ‘He has no interest in houses as such, or colours or styles or linen or curtains or paint, nothing. He wants to live in a caravan.’

Speaking about his late partner, Michael told The Irish Sunday Mirror: ‘He was such a great character and he comes across as himself and he would have loved it. He loved the attention.

‘It was very emotional to watch it back. It’s a lovely piece of work that tells the story so well. What’s nice about it is that it airs during the same week as Matt’s anniversary which is on the 14th.’

He added that he never expected their story would be told around the world, and they didn’t even formally invite people to their wedding.

‘I found a set of rings in Matt’s jewellery box that worked as wedding rings,’ he recalled.

Michael said he is sure they inspired other people to do the same, joking they were ‘like the odd couple’. Last year he told the Sunday Independent: ‘It was a real mixed marriage: I was straight and he was gay and I was Catholic and he was Protestant.’ 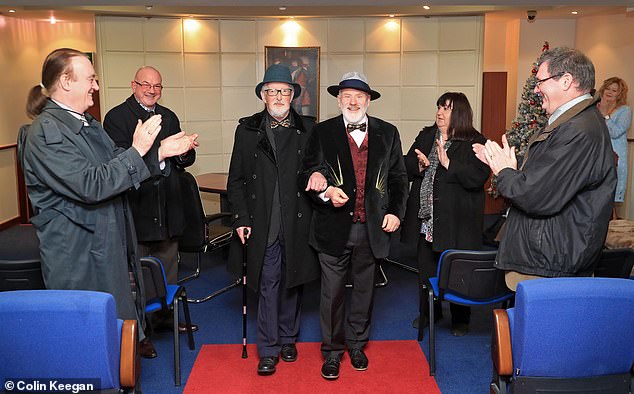 Sadly Matt passed away in January last year following a short illness, and Michael said his late husband would have loved the spotlight being on him. Pictured on their wedding day

Born to a single mother, Matt grew up on a 2,000 acre estate on the outskirts of Cashel, Co Tipperary, and became a trainee butler in a local mansion when he was 13, moving to Dublin at the age of 33.

The pair met in 1990 while both working for the Department of Posts and Telegraphs. Despite their 24 year age gap, they became friends, with Matt looking on Michael as a younger brother.

Michael, now a professional actor with three children from two relationships, formed a strong bond with Matt until he retired, at which point they lost contact for several years.

When Matt was approaching his 80s, circumstances brought them back together. Before Matt ‘proposed’, Michael was going through a difficult time as a house he was staying in was put up for sale.

He spent several nights sleeping in his car, and other times Matt invited him over to stay at his house before they eventually struck up their deal. 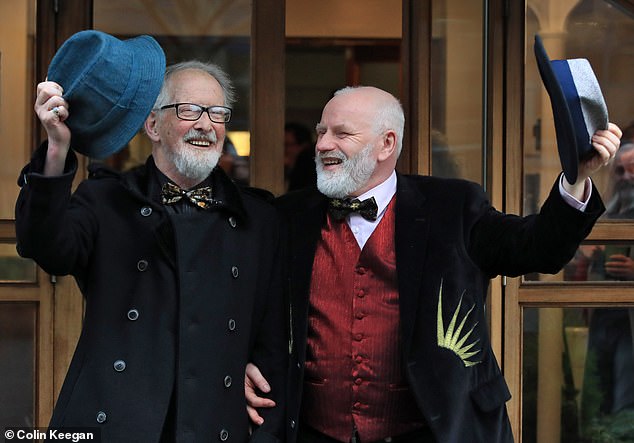 When Michael explained that, while it was a nice idea, tax rules meant he’d have to pay half its value to the government, Matt suggested they got married so that, when he died, the house would automatically go to him

When the news of their impending marriage broke, Matt told the New York Times that if two people can live together and help each other, it was the most important thing in life.

In the documentary Michael discusses in more detail why they decided to go ahead with the wedding.

He recalled: ‘At the time it was a marriage of convenience, you know. We didn’t know it was going to be a big international story.

‘It was an amazing journey. I needed somewhere to live and Matt needed someone to take care of him.

‘Matt spent his whole life looking after other people, fussing over them, people relied on him. But who was going to look after Matt?

When Michael explained that, while it was a nice idea, tax rules meant he’d have to pay half its value to the government, Matt suggested they got married so that, when he died, the house would automatically go to him.

Michael previously told LiveLine: ‘I love Matt — not in a sexual way — but Matt said it one of the days and I just thought, “That’s not a bad idea”.’

The pair argued that due to the fact Michael cared for Matt without taking a Carers Allowance, they saved the state money.

‘We didn’t go for the Carer’s Allowance because Matt would have to be examined, the house would have to be looked at and Matt’s a hoarder,’ Michael previously told Claire Byrne Live on RTE One.

‘This was a solution, I wouldn’t get paid by the carers and Matt would get looked after, otherwise Matt would be in a home by now.’

While the first year of their marriage was great, Michael told in the documentary how Matt’s health took a turn for the worse in the year before his death.

He explained: ‘I noticed his mind slipping a bit. He would come out with some strange things. I would just go along with it. I didn’t say anything, it was harmless.

‘The first year was great. We went in the car, we went walking a lot, to the cafe, we just went everywhere together. It was so good.’