Manchester United 4-0 Reading: England hero Alessia Russo gets in on the goals as Marc Skinner’s side lay down a marker for a WSL title bid with a rampant performance

By Aadam Patel For Mailonline

It was this very fixture that opened the WSL season last year with an attendance of just over 2,000 on a Friday night under the Sky Sports cameras.

Fast forward a year and over 5,000 fans were inside Leigh Sports Village as Marc Skinner’s Man Utd got their season started with a thumping victory over Reading.

It wouldn’t take a genius to know why the numbers had nearly tripled, as young boys and girls queued up in the car park from as early as 10am to get a glimpse of England’s Euro 2022 stars, with the trio of Mary Earps, Alessia Russo and Ella Toone all in the United starting eleven and new signing Nikita Parris on the bench. 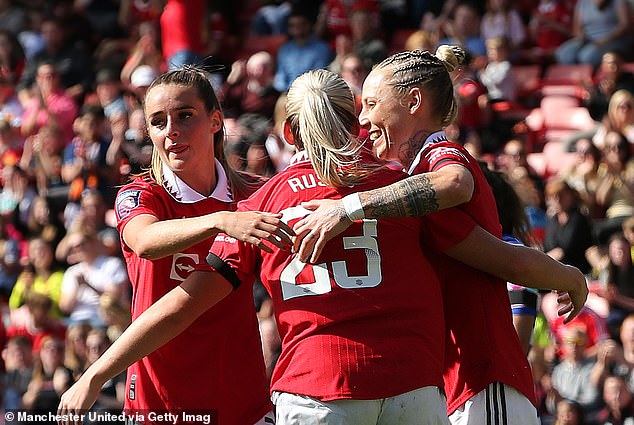 Tucked away on the outskirts of Wigan, this Saturday lunchtime kick-off in the early autumn sunshine showed the early impact of the Lionesses summer success.

Toone, the local girl and scorer of England’s opening goal in the final against Germany at Wembley, arrived to the loudest cheers but it was the new signing from Brighton, Maya Le Tissier, who got the show started with the opening goal.

Though from Guernsey just like Matt, the 20-year-old centre half bears no relation with the former Southampton forward however her first half brace on debut was something her namesake would certainly have been proud of as a centre forward.

The first, four minutes in, was an audacious back heel from Katie Zelem’s corner that looped over Grace Moloney and into the back of the Reading net. 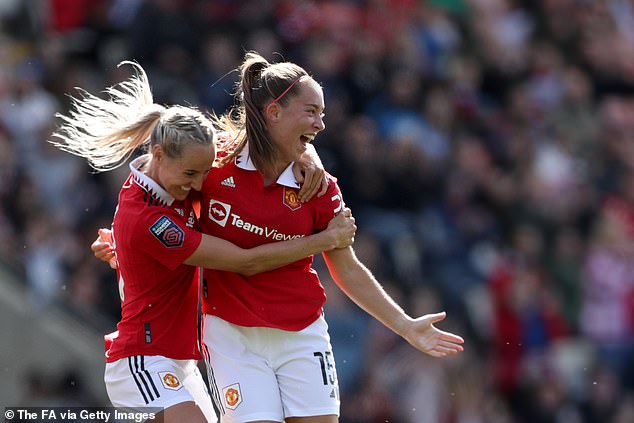 Zelem – the United skipper – doubled the lead on her 100th appearance for United from twelve yards out after Toone and Russo combined and Russo went down under a challenge from Moloney in the box.

The Reading keeper was adamant she got a touch on the ball but she couldn’t get a touch on Zelem’s superb spot kick into the top left corner.

Ten minutes later, Zelem and Le Tissier were at it again from another corner as Le Tissier converted a free header.

United were cruising, with the visitors struggling to keep possession of any kind and shortly after, Reading’s strategy of playing three at the back was exploited again with the Spanish duo of Lucia Garcia and Ona Batlle combining. Battle drove down the right flank and sent in a delightful cross for Russo to head in at the near post.

By half time, United were four goals to the good and the game was all but done. 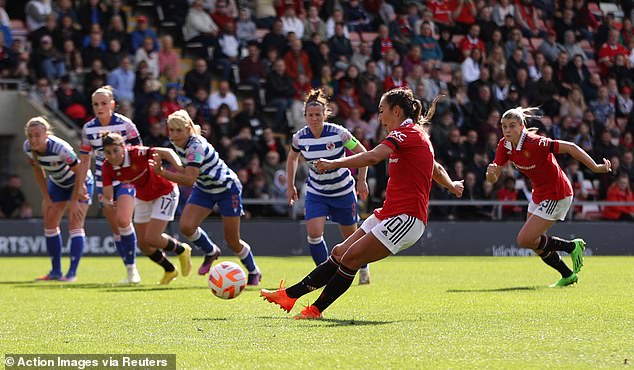 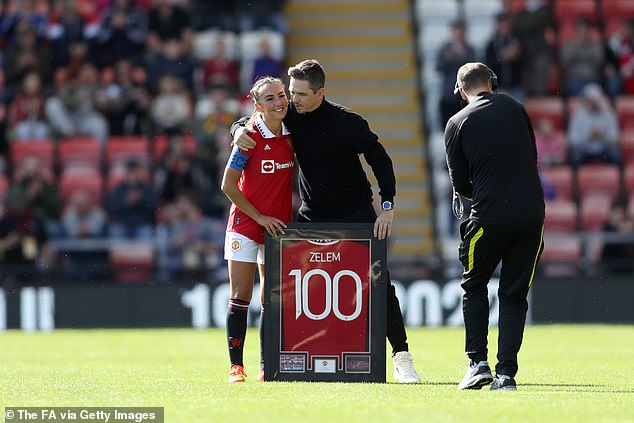 This was a ground that saw 15 goals across the four games it staged in Euro 2022 but despite their dominance, United didn’t to add to their tally after the break. Parris and Canadian forward Adriana Leon came on to make their United debuts as Skinner made all five substitutions.

The players embarked on a lap of honour after the full time whistle, signing autographs and taking pictures, much to the joy of the record-breaking crowd. In the end, the official attendance figure of 5,315 (7217 tickets were sold) was a Man Utd record at the ground.

‘When I walked out of the tunnel today with the fans there, it was a special moment. The whole of the other side was filled. It was a real rare experience for us as a team and I asked the players to give them the energy to keep feeding off. We have to be the spark to keep them coming back and especially in the first half, we did that,’ said Skinner.

If United carry on playing the way they did, in their quest to finally break into the WSL top three and get a European spot, that’s a record that will no doubt be broken again this campaign.