Manchester United forward Edinson Cavani has revealed he is closer to returning to first-team action after over a month out with a tendon injury.

The forward hasn’t featured since playing against Atalanta on November 2 – he scored a goal in Ole Gunnar Solskjaer’s last win as United boss on October 31 against Tottenham.

The 34-year-old is however back in training, as he revealed himself on Twitter with a post saying ‘already training with the group’, but tonight’s Champions League game against Young Boys comes too soon. 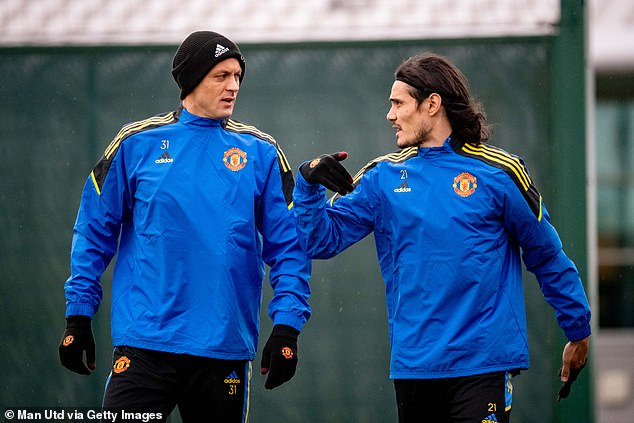 The Uruguayan (with Nemanja Matic, left) returned to training on Tuesday afternoon

Ralf Rangnick confirmed that Cavani, along with Raphael Varane, have returned to training in a boost ahead of the festive period.

‘They both cannot play tomorrow but they were part of the training session today, Edi even yesterday, for Rapha it was the first time he was on the pitch together with the team,’ Rangnick said.

‘If everything goes well I expect both of them back in full training next week, hopefully Monday next week they will be participating in all training sessions.

‘Obviously, they’re both top players, we would be happy to have them on board as soon as possible but especially with Rapha and his injury record in the past. 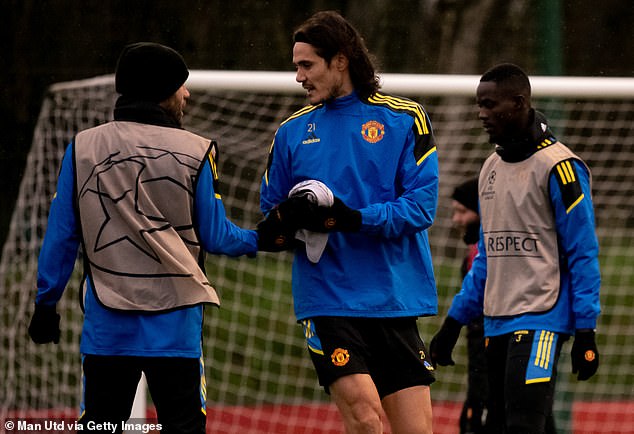 ‘We need to make sure that we will have him until the end of the season so it’s also about sustainability and not only getting him fit as soon as possible.

‘It would be great to have both players available as soon as possible but as I said, if possible, for the rest of the season.’

United can secure top spot in their group tonight with a point against the Swiss side, who they lost to on matchday one.