24 Hours in A&E viewers were left feeling ‘squeamish’ after a man was rushed to hospital after severing three of his fingers on his left hand with an electric saw.

In last night’s episode of the Channel 4 show, Steve, 57, from the UK, explained how he was cutting some wood on a chop saw when the wood slipped and his left hand went under the blade, detaching three of his fingers.

While all three fingers were found and put on ice, viewers found the graphic scene hard-to-watch as surgeons struggled to re-attach them.

‘I’m not squeamish about many things on #24hrsAE but those amputated fingers… Poor guy,’ wrote one, while a second penned: ‘I watch soooo many medical shows and I can stomach a lot, but that guy’s severed fingers.’

Steve, 57, from  the UK, was rushed to hospital after he severed three of his fingers on a chain saw in last night’s episode of Channel 4’s 24 Hours in A&E

Taking to Twitter, one person penned: ‘I watch soooo many medical shows and I can stomach a lot, but that guy’s severed fingers’ (pictured)

Steve’s partner Debbie, who accompanied him in the ambulance, explained: ‘I had been off work. I told him to finish off the spare room – he had some painting to finish off.’

‘I work at a local primary school. I had a big meeting that morning and my mobile phone went. I looked at the other people in that room and said, “It’s Steve – he never rings me.’

‘I just went, “everything alright” and he said, “I’ve chopped my fingers off.” It’s what horror stories are made of.’

Speaking of the time-critical injury, the surgeon explained: ‘Every minute that the amputated part does not have a blood supply, there will be less of a likelihood of being successfully able to reattach that part.’

Steve responded: ‘It was a stupid accident.’

The doctor went on to say that the aim of surgery was to ‘save as many digits’ as they could – but added it wasn’t a straight-forward process. 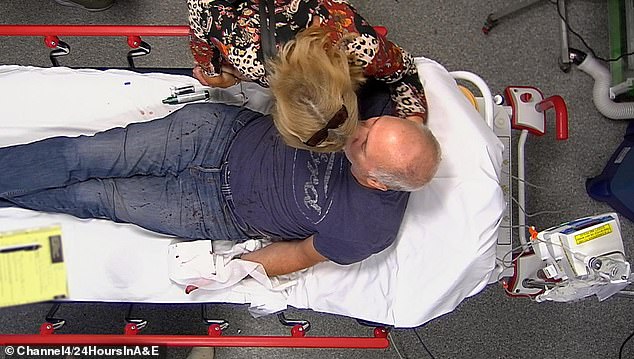 Steve’s partner Debbie (pictured, together) accompanied him in the ambulance as he was rushed to hospital

Taking to Twitter, one person penned: ‘I sit with my fingers interlocked watching 24 Hours in A&E. My absolute nightmare losing my fingers’ (pictured)

‘The likelihood is this is going to be a 12 hour plus operation. There is such a large amount of possibility of the outcome. Its very hard to predict it at this stage and there is  possibility that the operation may fail.’

Keeping in good spirits, Steve joked: ‘At least I get a rest!’

After spending 21 hours in surgery, doctors were able to reattach all of Steve’s fingers, but still didn’t know whether he’d regain the use of his right hand.

Six months later, Debbie explained: ‘Unfortunately, the index finger didn’t live, so they had to amputate. Every day is a new challenge. Every day we realise there’s something that needs adapting or that he needs a bit of help with,’

Steve added: ‘There’s a lot of things that I’m not able to do, or do as well as I was able to do – even simple things like tying shoe laces, doing up buttons, belts – anything like that is a lot more difficult.

And many were quick to take to Twitter following the stomach-churning episode.

‘I sit with my fingers interlocked watching #24hrsAE my absolute worst nightmare losing my fingers, they are the money makers,’ wrote one, while a second penned:

‘Watching #24hrsAE … the man who’s chopped his fingers off literally the same fingers that my brother did. I wonder if they will be able to reattach them? #Ouchies’

A third added: ‘Holy f***, his hand after he amputated his fingers.’