A man who thought his five-month rash was due to eczema has found out it was actually triggered by caterpillar hairs that got stuck on his arm when he climbed a wax apple tree.

The man — who has not been named — was diagnosed with eczema after going to a clinic in Fujian, on China’s east coast about 350 miles from Hong Kong, complaining of a painful, red rash on his left wrist.

But after steroid creams and anti-histamine pills failed to ease his symptoms the man, who was in his 50s, was sent to the area’s First Affiliated Hospital.

Scans there revealed hollow structures with ‘refractory golden walls’ nestled on his skin, which doctors said looked just like the hairs of a caterpillar.

Upon questioning, the man admitted he had climbed a wax apple tree swarming in spongy moth caterpillars that were bristling with hairs. He also claimed to have been bitten by an unidentified insect.

Doctors shifted to injecting steroids into the his lesions once every 30 days to treat the rash, with the patient recovering five months later.

The man in his 50s came to doctors in Fujian, eastern China, complaining of a pain and redness in his wrist (shown). Doctors initially diagnosed him with eczema 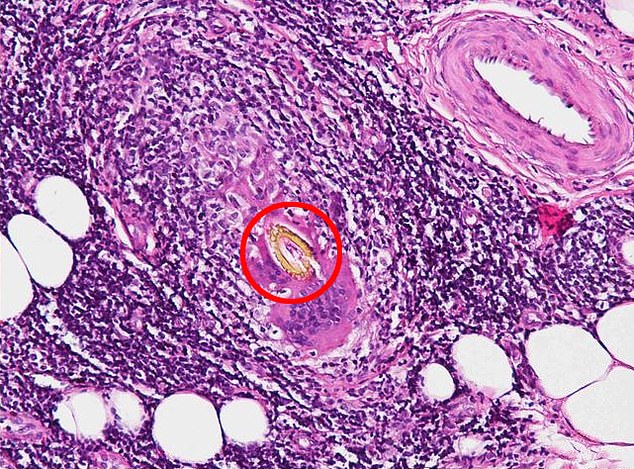 But then scans revealed hollow structures with ‘refractive golden surfaces’ on his skin which looked like the hairs of a caterpillar. Doctors re-diagnosed him with another illness 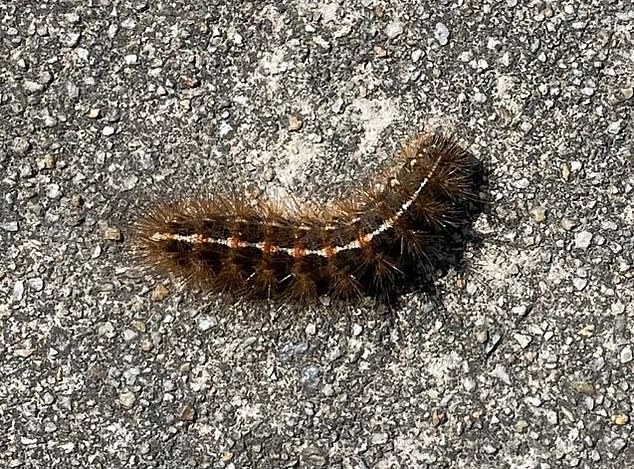 Upon questioning the patient admitted to climbing a wax apple tree infested with caterpillars from the spongy moth, or gypsy moth (above), which are covered with irritating hairs

The tale was revealed last month in the British Medical Journal by Dr Chao Ji, a dermatologist at the hospital, and others.

About 31 million Americans have eczema which causes itchiness and dryness in the skin when it is exposed to an irritant — such as laundry detergent or specific fabrics.

The condition is triggered by the immune system over-reacting to the outside irritant and starting to attack it.

Eczema is when the skin forms a rash and becomes reddened, blistering, and scaling.

It usually appears for the first time in childhood, but can effect people of all ages.

The condition is thought to be caused by an immune reaction to an irritant from the outside world, such as laundry detergent or a type of material.

Treatment focuses on creams and drugs to reduce inflammation.

About 70 percent of children who have eczema have seen the condition disappear by their late teens.

In the case report, doctors said the caterpillar hairs had been surrounded by white blood cells — showing an immune response had taken place that was causing the rash, redness and sharp pain.

They also observed granulomas, or small areas of inflammation triggered by immune cells bunching close together.

This led them to diagnose the patient with ‘foreign body granulomas’ — when the immune system is unable to break down an object leading to long term irritation.

In the case report, the patient said: ‘I had a redness and sharp pain on my left wrist and was diagnosed with eczema five months ago.

‘These symptoms did not improve after treatment… [so] I was then transferred to doctor Ji and had an examination.

‘The results suggested that the lesion was caused by the caterpillar. This reminded me of the exposure to the insect five months ago.

It was not mentioned whether the patient had a previous history of the condition.

The spongy moth was introduced to Boston from Europe about 130 years ago, and has now spread as far as North Carolina and Minnesota.

The critter is considered to be a pest because its caterpillars chomp through hundreds of thousands of hectares of trees — including apple trees — every year.

The hairs covering the caterpillars back are known to cause mild to moderate skin irritation, but this usually wears off within a few hours.

States such as New York have launched schemes to control its population through releasing infertile moths and pesticides.