A jealous male model has been jailed for a minimum of 17 years after stabbing his lodger to death because he thought his victim had kissed his girlfriend.

Colombian Carlos Velez, 20, dreamed of being Britain’s next fashion icon while living with his lover Ashlly Rondon-Diaz, 20, and chef David Martinez, 26, in Leyton, east London.

Velez flew into a jealous rage on March 6, a day after he claimed to have seen the devil, and repeatedly slashed Mr Martinez across the chest, legs, shoulder, neck and head, with a kitchen knife.

He denied murder but was convicted by a jury at the Old Bailey. Velez pretended to be mad in his police interview and claimed diminished responsibility from mental illness at his trial.

He described ‘visions of the devil’ which started in his childhood and claimed his memory went blank a day before the killing.

But a psychiatrist said it was ‘unlikely’ that any mental illness would cause such an amnesia and the jury convicted him of murder after deliberating for three hours.

After the attack his Spanish victim ran outside and collapsed on the pavement where he bled to death while Velez covered his face and fled to Portsmouth.

Velez flew into a jealous rage on March 6 and repeatedly slashed David Martinez (left) across the chest, legs, shoulder, neck and head with a kitchen knife after accusing him of kissing his girlfriend Ashlly Rondon-Diaz (right) at their flat in Leyton, east London

Velez was stopped by police riding the bicycle beside the M27 outside the Hampshire port early the next morning.

Judge Anthony Leonard QC said: ‘You deliberately tried to lie your way out of this, when you realised you couldn’t get out of it you decided to play madness.

‘In the police interview it was clear you were putting on a performance. The doctor in his evidence described it as a crude attempt at fabrication.

‘Your visions were likely a result of sleep paralysis, not from a psychiatric disorder.

‘You calmly left the building and made your escape with your hood up, you took the knife with you and made your way to Portsmouth where you friend was, told lies and half-truths to those you met down there.

‘You are a violent man with hot tempter, there was no justification for using a knife on that man.

‘You have narcissistic traits which exist in absence of mania and sexual jealousy which explains why you are violent when you feel disrespected. 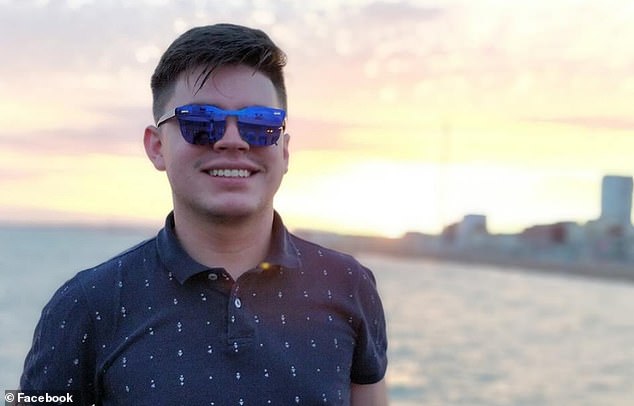 David Martinez (pictured), 26, was doing his laundry when Velez allegedly stormed in to find them having a friendly chat, the court heard today

‘I accept that you suffer from anti social personality disorder, your use of skunk cannabis has made your condition worse.

‘Your condition is not sufficiently severe to allow me to reduce your minimum sentence, you are a man with attempt which you can control when you want to.’

Judge Leonard accepted that the attack was not premeditated and followed an argument but noted its ‘ferocity’.

The court heard Mr Martinez suffered two deep stomach wounds in quick succession, cuts to the legs and arms as he warded off blows.

Following his sentence the 20-year-old admitted punching a prison officer twice during his prison induction at Belmarsh, only ten days after he was remanded.

Velez has a history of violence with a conviction for cutting a chef’s throat because he felt ‘disrespected’ and punching a man on the London underground after he thought he had looked at his girlfriend’s bottom. 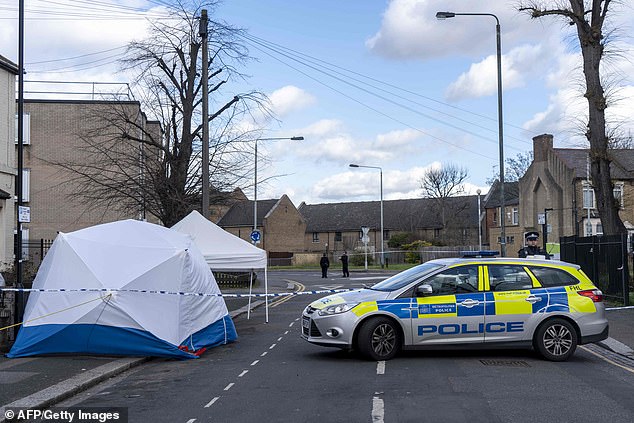 A forensic tent is seen pitched inside a police cordon at the scene in Leyton, east London, on March 7. Velez is said to have fled to Portsmouth, near where he was arrested

He also had an aggressive confrontation with a neighbour, who he suspected of having an interest in Ms Rondon-Diaz, jurors were told.

On the day of the killing, Mr Martinez texted a cousin, writing that Velez was acting ‘all crazy and was asking if had kissed his girlfriend’.

In another message, he wrote: ‘I am going to try to go on Friday else I’ll end up dead.’

Victim David Martinez’s family said he approached life with ‘humour, intelligence and hard work’ and had been left distraught and anxious by their loss.

Velez had written Psalm 143 in blood red ink on his ceiling, the court heard.

The inscription from the Bible ends: ‘My God, teach me your will God. Rescue me Lord, as you have promised, and your goodness save me from my troubles or with your love for me kill my enemies and destroy all my oppressors for I am your servant.’

Velez had told jurors: ‘When I first met the devil it was only a few times in one year, maybe 10 times, when I was about five, then after that I think I was about eight. 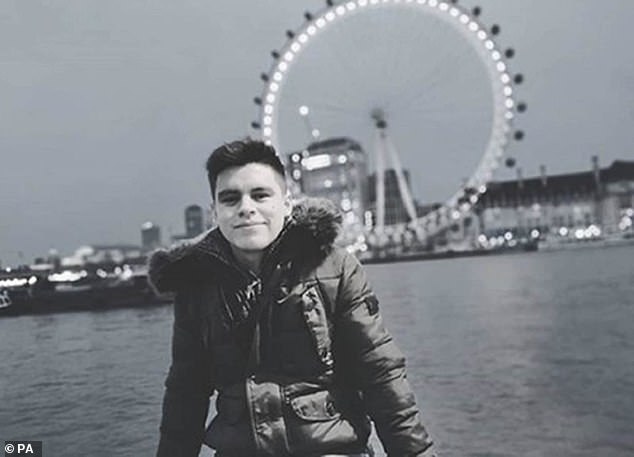 On the day of the killing, Mr Martinez (pictured) texted a cousin, writing that Velez was acting ‘all crazy and was asking if had kissed his girlfriend’

Velez’s mental deterioration during his childhood was ignored by his parents, said his barrister Charlie Sherrard.

He will also suffer a tougher regime in prison because he punched a guard over not getting food during his induction to Belmarsh.

‘He has been very badly served in life so far.

‘It is astonishing bearing in mind that it was certainly accepted by both parents when interviewed at the John Howard centre that there were signs of mental deterioration of personality disorder forming in his early years and yet they did nothing.

‘It’s not acceptable in my submission for parents to be like that, if they bring someone into the world their job is to protect them and do what is right.

‘There was very little formulation of intent at all, it was out of control, he didn’t really think it through, what he was doing.

‘He turned to cannabis as a means of his own coping mechanism for dealing with what was going on in his head, all the more reason why he should have had treatment.

‘It was something that wasn’t premeditated, it was out of the blue completely.

‘His sleep paralysis, his dreams, his hallucinations are genuine and real and he needs treatment.

‘The ramifications of assaulting a prison officer when about to start a life sentence are quite significant, he will be submitted to a tough regime.’

During the trial the heartbroken 20-year-old winced as she relived the moment she saw Velez ‘giving it’ to Mr Martinez with one of his mother’s kitchen knives.

‘He was angry and I was going to hug him and he asked me what I was doing in the kitchen with David,’ Ms Rondon-Diaz wept.

‘I said I wasn’t doing anything but he was insisting that I had been doing something with David in the kitchen because he saw that I was very happy and he thought that I had just kissed him.

‘We went back to my room and carried on talking. I said I hadn’t done anything and he hit me in the face but it wasn’t hard, it didn’t hurt me. It was with the palm of his hand.

‘David said ‘no, why would I do that?’ and David just laughed and then David went back to his room. He just said no and laughed and closed his door.

‘I called his (Velez’s) mother to tell her what had happened and then I hung up because she was at work. I closed my bedroom door and I was alone.’

‘I went to the kitchen to get a gelatine out of the fridge Carlos was sitting at the kitchen table. He wasn’t doing anything, he was just sitting down looking straight ahead. He didn’t even look at me.

‘I was in my bedroom and I was getting made up, putting my make-up on, as I was getting ready to go out with my girlfriend and within 20 minutes I heard screams. I thought Carlos was just screaming but I heard somebody say: ‘Help me Ashlly.’

‘I went to see where the screams were coming from, but I never thought it was what was happening. As there’s no door to the kitchen I saw. I saw David and Carlos in the kitchen.

‘Carlos had a knife which I had seen before which was green and he was giving it to David in the head and the stomach but it was very quick and I couldn’t see very well because I was so upset.

‘I ran out and opened the door and went to the street. I left that door open and I ran out and David came running behind me. He pushed me slightly aside and passed in front of me and said: ‘Help me.”

Mr Martinez collapsed and died from his injuries in the street.

Ms Rondon-Diaz added: ‘He ran out and then he just passed out on the pavement. David was on the floor and Carlos was leaning over. ‘He was stabbing David with a knife. David was screaming trying to escape.’

Dr Frank Farnham said Velez had not experienced psychosis as ‘severe’ as schizophrenia and seemed able to understand the nature of his conduct.

The psychiatrist said: ‘I think narcissistic daydreaming was referred to in the report and it’s possible this tipped over into a psychotic experience.’

‘David Martinez was murdered inside his own home where he should have been safe. The tragedy of this case lies in the knowledge that David was aware that his life could be in danger and had plans to move out of the flat.

‘The prosecution case against Carlos Velez included strong witness testimony and forensic evidence, which was able to convince the jury of his guilt.

‘When interviewed by police, Velez changed his story numerous times. First he claimed that he himself had been robbed of his phone at knife-point and had no knowledge of the murder.

‘Then he went on to say he could not remember what had happened. Later he claimed to be having visions and hearing voices. At one point he even sought to blame the killing on his girlfriend.

‘Velez will now spend a significant time in jail as a result of his actions.’

Velez, of Leyton, claimed diminished responsibility but was convicted of murder and sentenced to life in prison with a minimum tariff of 17 years.