A man has fathered a baby using sperm he banked 26 years ago.

Peter Hickles, who lives in Colchester, Essex, gave his sample on June 5, 1996, when he was aged just 21, after he was diagnosed with Hodgkin’s lymphoma — a rare form of cancer.

The chemotherapy used to treat the disease, which hits more than 2,000 Britons and 8,500 Americans every year, can cause permanent infertility.

So Mr Hickles froze his sperm in the summer of 1996, just three days before the UEFA European Football Championship kicked off.

Mr Hickles, who is now 47 and runs a landscaping and surfacing business, was told at the time that his sample would likely only be viable for just 10 years.

But on Thursday — more than 26 years after Mr Hickles gave his sperm sample — his fiancé Aurelija Aperaviciute, 32, gave birth to baby boy Kai.

Mr Hickles, an ex-youth player for Tottenham Hotspur and season ticket holder, said: ‘I keep looking at him shaking my head in disbelief. 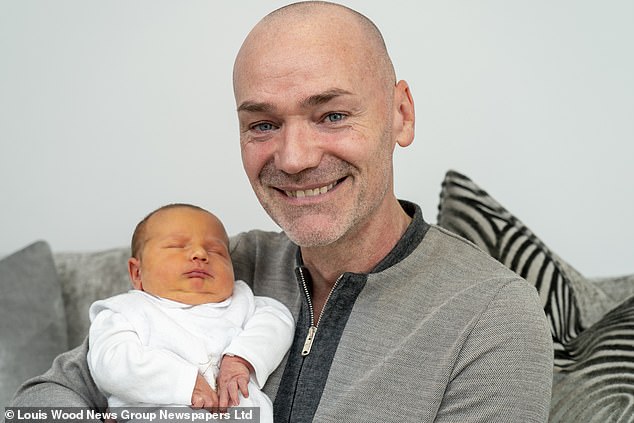 Mr Hickles said: ‘I keep looking at him shaking my head in disbelief’ 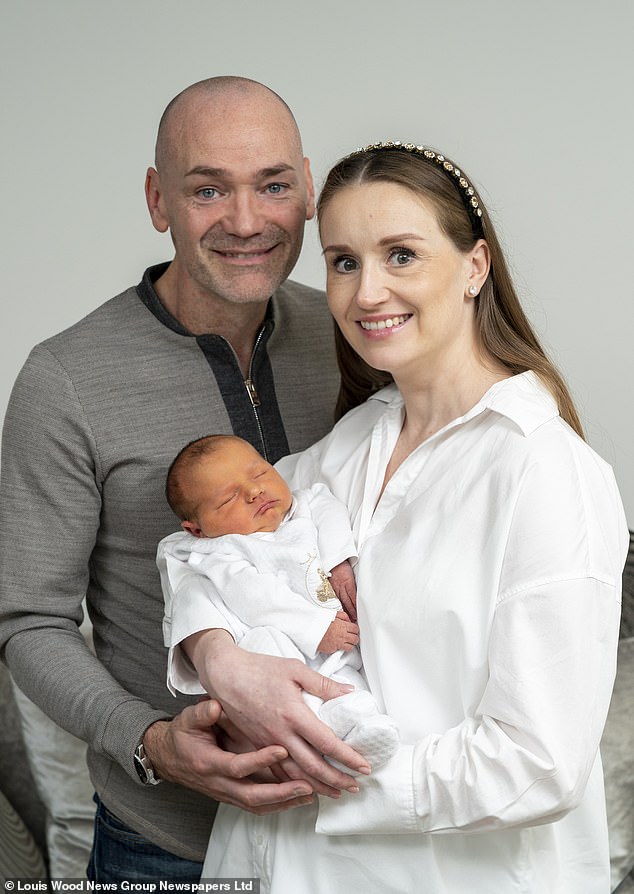 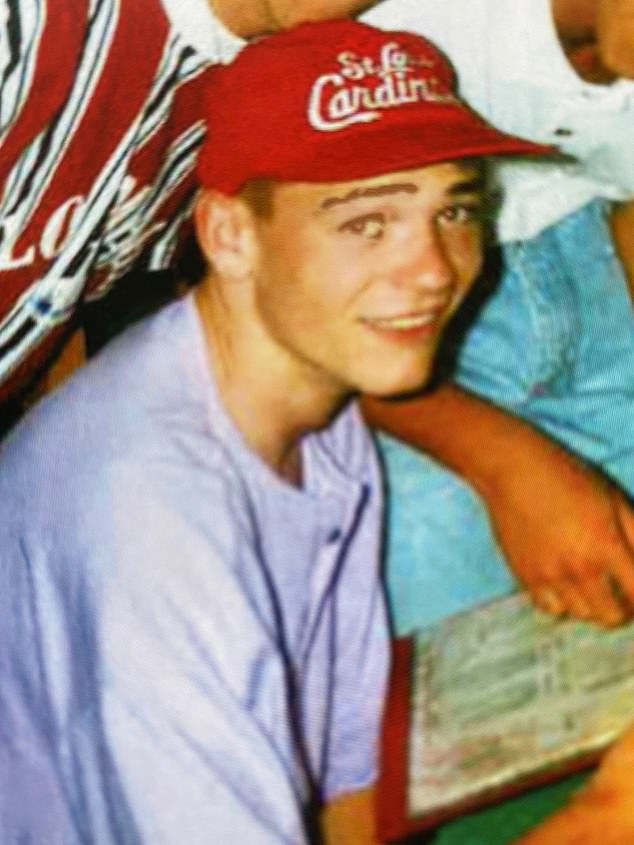 In 1996, doctors diagnosed Mr Hickles (pictured that year) with Hodgkin’s lymphoma. The disease is a cancer that develops in the lymphatic system, a network of vessels and glands spread throughout the body

How long can sperm be stored for?

Men can freeze their sperm to use themselves in the future or to donate to someone else.

Some go ahead with the procedure due to a medical condition or treatment that may affect their fertility.

It involves producing a sample of semen at a clinic that is then mixed with a fluid to protect it from damage during freezing.

If sperm is not used immediately in treatment, men may opt to store their sperm for the future.

However, if they had premature infertility or were going to be having medical treatment, they store for up to 55 years.

But the law changed this summer and now permits anyone to store sperm, eggs or embryos for 55 years from the date that the embryos are first placed in storage.

However, those who provided the sample have to renew your consent every 10 years.

‘He really is a little miracle. The fact that he was basically ready to go just before Euro 96 and was born before the World Cup is amazing.

‘Football is definitely in his blood. Maybe he’ll see Spurs win the league one day, who knows. It’s incredible to think he’s been in the deep freeze all this time.’

Mr Hickles started to feel unwell while playing for Grays, part of the Isthmian Football League.

Medics initially believed he was suffering from rheumatoid arthritis, which causes pain, swelling and stiffness in the hands, wrists and feet.

But just two weeks after he landed in Australia for a year-long holiday, his doctor spotted a tumour in his back which turned out to be Hodgkin’s lymphoma.

The disease is a cancer that develops in the lymphatic system, a network of vessels and glands spread throughout the body.

Symptoms include swelling in the next, armpit or groin that can be painless or ache. Sufferers may also have night sweats, unintentional weight loss and a fever.

Doctors told Mr Hickles to return to the UK for treatment.

He was also advised to make a sperm sample over concerns he would face life-long fertility problems following gruelling chemotherapy.

He told The Sun: ‘It was a bit grotty having to do it. There were magazines left in a cubicle.

‘I’ll never forget it — I had to hand the little plastic pot to reception and for some reason it’s always a young woman.

‘I had to wait for an hour while they checked the quality so I nipped off for a couple of pints and when I got back they said everything was fine.’

Mr Hickles underwent nine rounds of chemotherapy, which left him with no sperm count.

The treatment can reduce or stop sperm production, which is usually temporary but can be permanent. 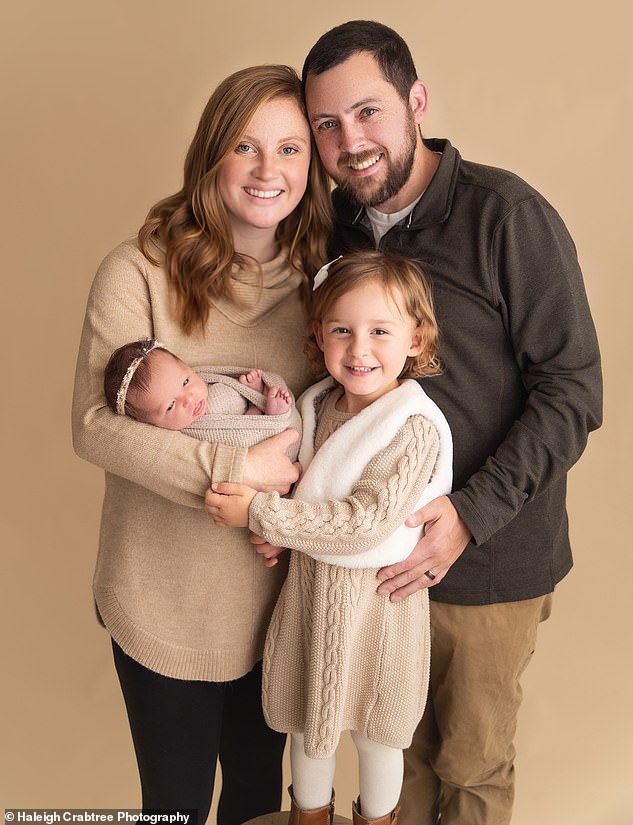 Molly was born on October 26 to her mom Tina Gibson, who was only one year old when her daughter’s embryo was frozen back in 1992. Pictured Molly with mom Tina, dad Ben and sister Emma 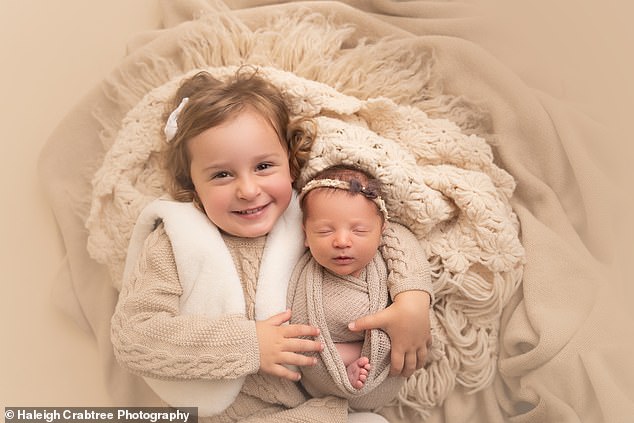 Molly beat her own sister’s existing record after Emma Wren Gibson was born in 2017, 24 years after her embryo was frozen. Pictured the two sisters together

Mr Hickles said: ‘When I got together with Aurelija we wanted a child but knew it would be difficult. I’m incredibly lucky to have her.

‘Luckily, the sperm sample was judged to be viable so we decided to give IVF a go.’

When he deposited his sample at University College Hospital in London a quarter of a century ago, he was told it would be usable for just 10 years.

But advancements in technology and changes in laws mean that sperm can now be stored for up to 55 years.

She gave birth by caesarean section on October 20 to Kai, who weighed 8lb 10oz.

The 26-year gap between donating sperm and birthing a baby is not a record, though.

The oldest sperm used in a successful round of IVF was stored for 27 years and six months. Lauren Gonzales and Robert Stone used it to have a child in November 2015.

While these cases involved using frozen sperm, embryos — an egg that has already been fertilised by sperm — have been frozen for just as long.

Tina and Ben Gibson, a couple in their thirties from Tennessee, used an embryo that had been frozen for 27 years and four months, welcoming baby girl Molly in October 2020.

After struggling with fertility problems for five years, the pair decided to use an embryo — a fertilised egg — that had been donated by another couple in October 1992, when Mrs Gibson was around one year old, after they did not use it themselves.

It is thought to be the record for the longest-frozen embryo to result in a birth.

The couple broke the previous record they set with Molly’s older sister Emma, who is her genetic sibling, as the pair of embryos were donated together.