‘No-one compares to him!’: Pep Guardiola says Erling Haaland’s stats ‘speak for themselves’ after striker made a stunning start to his Man City career with 17 goals in 11 games, including three hat-tricks

Pep Guardiola believes ‘no-one can compete with Erling Haaland’ after the Norwegian striker made a sensational start to life at Manchester City.

Haaland, 22, has already scored 17 goals in 11 matches for City, including a stunning hat-trick in the demolition of Manchester United in the derby on Sunday.

The £51million striker has already scored three Premier League hat-tricks having taken the adaptation to English football in his stride. 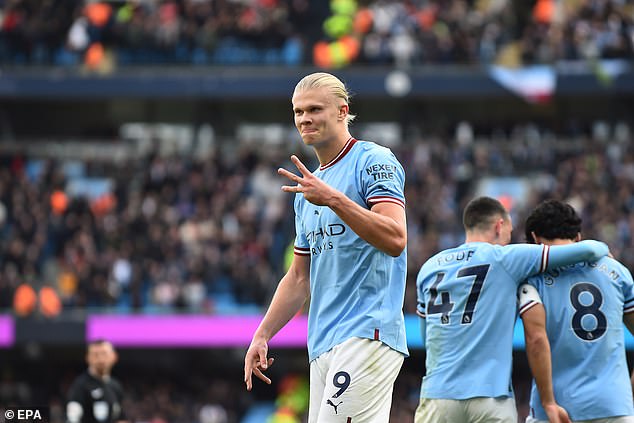 And City manager Guardiola, speaking ahead of their Champions League fixture with Copenhagen on Wednesday night, said: ‘At his age, no-one can compete with him, no-one.

‘The numbers speak for themselves. Inside, in the locker room and on the pitch we see things that are not in the stats that make us feel happy to have him here.’

On Haaland’s immediate chemistry with his City team-mates, Guardiola added: ‘It normally happens with nice people. A lot of gestures with young players, with staff, when it’s going well how he encouraged guys. 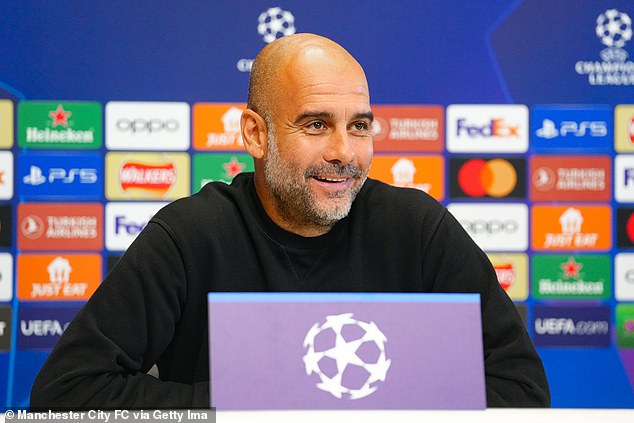 Speaking ahead of City’s match against Copenhagen, Pep Guardiola hailed his new striker

‘He’s not just a striker scoring goals. It comes from his education.’

Sergio Gomez, the Spanish attacking midfielder who signed for City from Anderlecht over the summer, revealed that Haaland wasn’t satisfied with City’s win on Sunday.

He said: ‘When I am in the dug-out I enjoy him. He’s amazing, an outstanding player, we are aware how important he is.

‘I try to learn from him, his hunger and ambition. He doesn’t settle for one goal.

‘In the derby after we conceded the third goal he was angry, as he wanted more, a clean sheet. It’s important to see that.’ 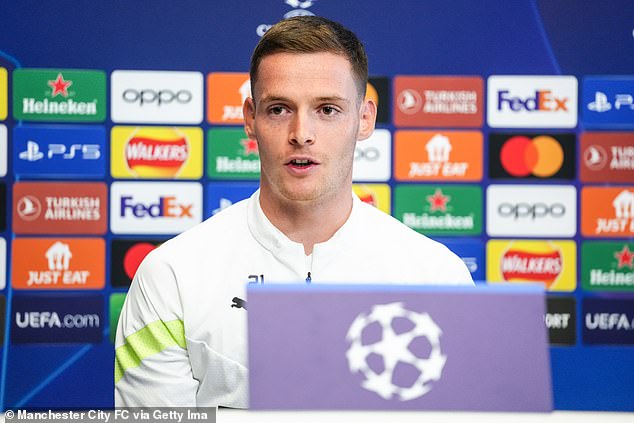 ‘As a guy he doesn’t feel the pressure. The bigger the stage, he behaves better,’ he said.

‘You saw the assist for Erling, he starts in our box. He can do it and is good in smaller spaces. As a strike, he can do the movements in behind.

‘It is incredible he can do many things. Every year, the more games you play you’re a better player.’ 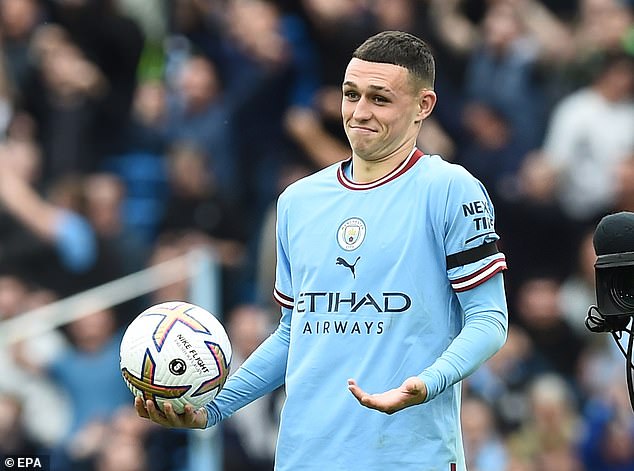 Guardiola confirmed that Kyle Walker looks set to miss the match in Denmark after the right-back was forced off with a knock during Sunday’s match.

Midfielder Rodri, who missed the derby, will be checked in training ahead of a potential return.

‘Rodri is better but I think Kyle is out. We will see in training later,’ said Guardiola.