EXPRESS INFORMER > News & Politics > Man carrying axe died after he was shot twice by police when Tasers had no effect, an inquest hears

A heroin-addicted man who was wielding an axe was shot dead by police when Tasers had no effect, an inquest jury has heard.

Lewis Skelton, 31, who was heading towards a busy area of Hull, was shot twice after he failed to respond to officers’ instructions to stop, a hearing in the city heard on Tuesday.

The inquest into his death heard Lewis developed a heroin addiction at the age of 18 and had struggled with mental health problems.

Giving the jury an overview of what happened to Mr Skelton, assistant coroner Oliver Longstaff explained that Humberside Police received three 999 calls on November 29 2016, saying a man was walking down Holderness Road carrying an axe like a ‘hatchet’.

Mr Longstaff said that, although no witnesses saw Mr Skelton threaten anyone, he was described as ‘walking with purpose’ and police in command feared he ‘might have an intended target’ and was heading towards a busy area of Hull.

Armed police were deployed and two officers caught up with him on Caroline Place.

Mr Longstaff said: ‘You will be told that the officers identified themselves as armed police to Lewis who ignored their instruction to stop and stand still.’ 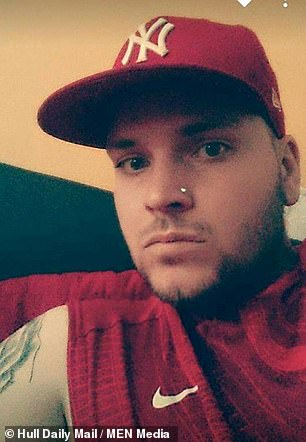 Lewis Skelton died after being shot while walking through the streets of Hull wielding an axe. An inquest into his death heard an officer opened fire after he failed to respond to commands

The coroner said that, when Mr Skelton ran from the officers, one of them discharged his Taser ‘with no discernible effect’.

He said Mr Skelton continued to move away from the officers with the Taser wires and cartridges trailing behind him.

The second officer shouted another warning and discharged his Taser which also had no effect, the coroner said.

Mr Longstaff said Mr Skelton continued at ‘jogging pace’ onto Francis Street where he was approaching a group of workmen.

He said the first officer to use his Taser thought there was an immediate threat to the workmen in the street and ‘decided that it was necessary for him to use his firearm – a Glock pistol’.

The coroner told the jury that the officer shot him in the right-hand side of his back and Mr Skelton stumbled but did not stop, with the axe swinging in his arms as he moved. 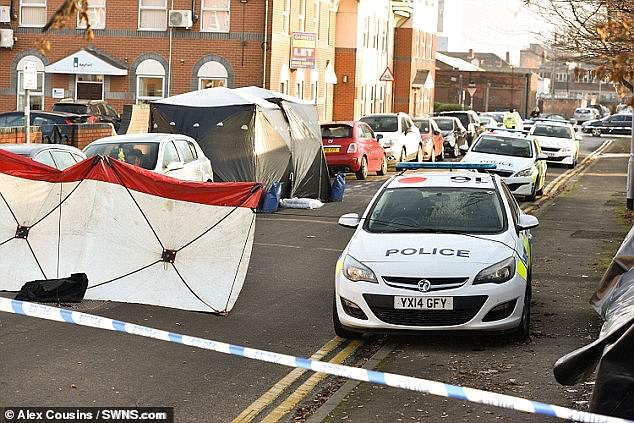 The inquest was told officers twice deployed Tasers in a bid to stop Mr Skelton in his tracks but that he continued to walk towards a crowded area while carrying an axe. Pictured: the scene

He said the officer then fired a second shot, after delivering another warning, which stopped Mr Skelton and the two officers moved in to restrain him.

The coroner said the jury will hear how Mr Skelton continued to struggle as the officers and paramedics tended to his injuries.

He died later in hospital.

Mr Longstaff told the jury that the inquest, at Hull Coroners Court, will last a number of weeks.

In a pen-portrait read to the court, Mr Skelton’s parents, Helen and Glen, described how their son was a ‘kind man with a good heart’. 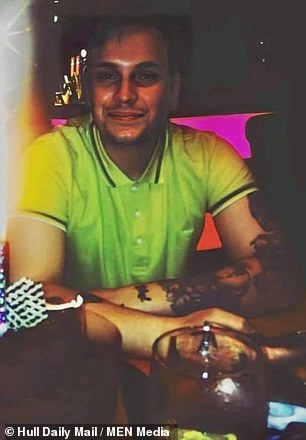 Mr and Mrs Skelton said he was a key part of their close-knit family and the events of November 2016 had ‘deeply affected’ all of them.

They said Mr Skelton was a passionate Liverpool fan who also loved music and animals.

Mr and Mrs Skelton said their son struggled with mental health problems and added: ‘Lewis had his problems, but who doesn’t?’

In a formal witness statement read to the court, Glen Skelton said his son started taking heroin when he was about 18 years old after getting in with the ‘wrong crowd’.

Glen Skelton said his son served a prison sentence in 2008 that left him ‘broken’ and he later developed psychosis.

One of Mr Skelton’s three sisters, Laura, said in a statement that her brother was ‘not a typical addict’ and remained kind-natured, never stealing to fund his drug taking.

She said her brother had been sectioned twice due to his mental health problems.

Ms Skelton said in her statement: ‘I do not believe that Lewis deserved to die.

‘He needed help not killing.’