A dog-owner ‘brutally’ murdered his disabled neighbour following a row about his barking Staffordshire bull terrier, a court heard.

Raymond Burrell, 43, subjected Matthew Sheehan, 36, to a ‘merciless’ attack in Adamsdown, Cardiff in September 2015 after he protested about the noise his pet made at night.

Burrell was found guilty of inflicting grievous bodily harm and was jailed for life in 2016 after Mr Sheehan was left in a ‘vegetative state’.

He is now on trial for murder at Newport Crown Court after the disabled man, who had cerebellar ataxia, died in November 2017.

A court heard how Burrell was arrested and taken away in a police van following the ‘severe’ attack five years ago, which left Mr Sheehan with fractures to his nose and eye socket, swelling to his mouth, and bruising to both sides of his brain.

After his arrest, a court heard how the suspect dropped his trousers and smeared faeces on his clothes and around the van, telling officers ‘this is how you get rid of evidence.’

Raymond Burrell (pictured) subjected Matthew Sheehan, 36, to a ‘merciless’ attack in Adamsdown, Cardiff in September 2015 because he protested about the noise his pet made at night

He allegedly said: ‘You don’t like that, do you? This is how you get rid of evidence.’

Prosecutor Michael Jones QC said Burrell was put into a cell and his clothes were confiscated. He was heard saying to an officer: ‘Ain’t done s***, mate. Prove that s***.’

Prior to the attack, Mr Sheehan, who required a stick to walk, had been annoyed by Burrell’s pet Staffordshire bull terrier barking from across the street, a court heard.

Mr Jones told how Burrell stormed over to the disabled man’s house in Adamsdown to carry out the brutal assault, which caused ‘catastrophic’ injuries.

He said: ‘He deliberately, brutally, and repeatedly attacked him causing him catastrophic and life-changing injuries that ultimately led to his death.’

Burrell was found guilty of inflicting grievous bodily harm in 2016 and jailed for life. 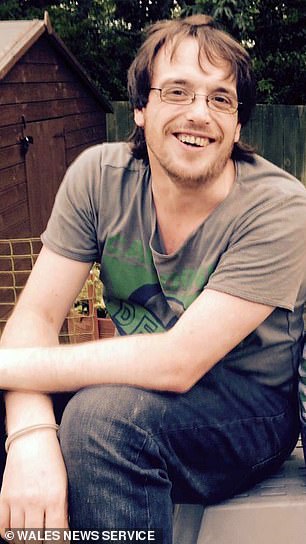 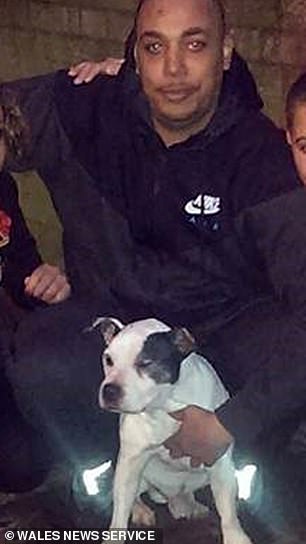 But Mr Sheehan died a year after the court case – and Burrell was later charged with his murder.

Mr Sheehan, who was living independently in community housing, had cerebellar ataxia, which affected the part of his brain controlling eye movements, speech, and limb movements. 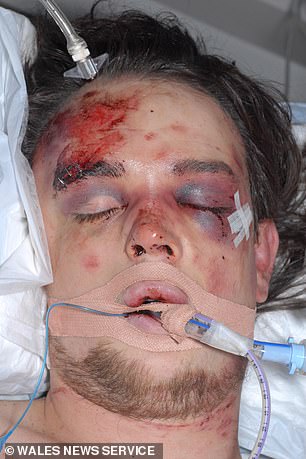 Pictured: Mr Sheehan after the attack in September 2015

His family said he needed a crutch to walk and had to concentrate on his balance to stay on his feet.

The court heard a friend went to visit Mr Sheehan the day before the attack – and he seemed ‘frightened’ following a dispute with a neighbour.

Mr Sheehan told his friend a neighbour’s dog was barking and keeping him awake, so he told the dog to ‘shut up’ but the neighbour confronted him.

Two neighbours who lived upstairs said they heard someone kicking a door at around 7am on September 1, 2015.

The neighbours reported hearing banging, kicking, shouting and Mr Sheehan’s voice screaming: ‘Help.’ They also heard ‘groaning’ noises like someone was in pain.

One of the neighbours called 999 and they described the defendant walking off and then coming back to the flat, the court heard.

Mr Jones described the assault as a ‘relentless beating’. He said Burrell walked away again, looking ‘casual’ and as if nothing had happened.