Amid all the warnings over the threat to animals from destructive humans, it is some rare good news.

The number of mammal species in Britain is actually higher today, compared to prehistoric times.

While we have lost the mighty aurochs which roamed through ancient forests, our native bears and wolves, we have gained all kinds of mammals, from the edible dormice which the Romans used to eat, to rabbits and the spectacularly horned Mouflon sheep.

In fact, while Britain had 50 different mammal species 8,000 years ago, when humans were hunter-gatherers, it now has at least 58.

New mammal species gained in the past 8,000 years:

Researchers at the University of York looked at the bones of animals found in Britain from 8,000 years ago, and found seven have been lost, including lynx and moose.

But, as of 2020, we have gained 15 mammal species, including four types of deer probably brought here for hunting, and red-necked wallabies, which became established in Scotland after escaping from private collections and zoos in the last century.

While some new species, like rats and grey squirrels, may be less welcome, the findings show the wide range of furry creatures on this island, from hedgehogs and badgers to grazing cows.

Dr Jack Hatfield, who led the study from the Leverhulme Centre for Anthropocene Biodiversity at the University of York, said: ‘It is somewhat unexpected that we actually have more mammal species now than in prehistoric times.

‘As we are realising with beavers, we have the potential to increase the number, by bringing some extinct species back, and this has been discussed for wolves and lynx, so our number of mammals could increase further.

‘However we might not see a return of the large predators like bears, as many people do see them as dangerous, based on incidents from other countries, and a lot of Britain is covered by livestock like cattle and sheep.’

The study, which looked at the whole of Europe, including Britain, found that, while some island mammals are now extinct, only two species which roamed the mainland 8,000 years ago have been permanently lost globally – the aurochs and the European wild ass.

The Knepp estate in West Sussex, a former farm turned into a rewilding project, is trying to replace hardy aurochs which ate vegetation in the winter, when grass was scarce, and survived outside all year round, with long-horned cattle which have a similar role within the environment.

Bison have been reintroduced to the UK this year, in Kent, after thousands of years of absence, but these were not here 8,000 years ago so are not included in the tally of animals we have gained.

The researchers also do not include beavers because, despite being wild-living beavers being brought back to parts of Scotland and Devon, their populations are not yet established.

Neither do they include wild boar – the long-tusked animals hunted to extinction in the UK several centuries ago which have escaped from farms to recolonise some of the areas they vanished from, but do not count as a reintroduction, because they were here 8,000 years ago.

However, researchers’ tally does include species relatively new to the UK including muntjac, sika, fallow and Chinese water deer. 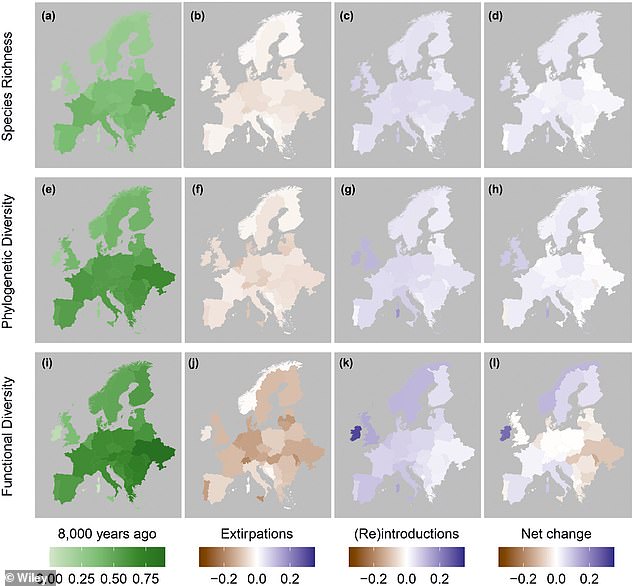 We have also gained Siberian chipmunks, which look a lot like squirrels, but with distinctive brown and white stripes extending from nose to tail.

The invasive species, which are thought to have got into the countryside after pets escaped, compete with native red squirrels.

Among other invaders introduced to Britain are the American mink, which escaped from fur farms and threaten our water voles and seabirds, as well as black and brown rats.

Edible dormice, a favourite delicacy of the Romans, are thought to have been released in Britain in 1902.

The study compared data for 2020 from archaeological records, when there were only an estimated five million people on the planet and early farming was spreading across Europe, because the climate had recently become more stable, making it easier to distinguish between manmade impacts on species and naturally occurring changes.

Species such as the woolly rhino and mammoth had already disappeared at the end of the last ice age.

Dr Hatfield, whose study is published in the journal Global Change Biology, said: ‘Although our study does not look at gains and losses in numbers of animals within species, it offers a hopeful vision for the future.

‘The great majority of Europe’s mammals are still here and if promises to give more land over to nature are upheld, biodiversity levels could increase beyond the levels seen by our ancestors.’

WOOLLY MAMMOTHS EXPLAINED: THESE GIANT MAMMALS ROAMED THE EARTH DURING THE PLEISTOCENE 10,000 YEARS AGO

The woolly mammoth roamed the icy tundra of Europe and North America for 140,000 years, disappearing at the end of the Pleistocene period, 10,000 years ago.

They are one of the best understood prehistoric animals known to science because their remains are often not fossilised but frozen and preserved.

Males were around 12 feet (3.5m) tall, while the females were slightly smaller.

Their trunks had ‘two fingers’ at the end to help them pluck grass, twigs and other vegetation.

They get their name from the Russian ‘mammut’, or earth mole, as it was believed the animals lived underground and died on contact with light – explaining why they were always found dead and half-buried.

Their bones were once believed to have belonged to extinct races of giants.

Woolly mammoths and modern-day elephants are closely related, sharing 99.4 per cent of their genes.

The two species took separate evolutionary paths six million years ago, at about the same time humans and chimpanzees went their own way.

Woolly mammoths co-existed with early humans, who hunted them for food and used their bones and tusks for making weapons and art.