Withdrawal method of survival! Some male spiders CATAPULT themselves away from females immediately after mating to avoid being eaten

The withdrawal method is known as a risky way to avoid pregnancy, but for one species of spider, the ability to make a hasty withdrawal is a matter of life or death.

After males of the orb-weaving spider Philoponella prominens mate with a female, they launch themselves away in a split-second catapult action.

The aim of this manoeuvre is to avoid being eaten by the female in an act of sexual cannibalism.

‘Females may use this behaviour to judge the quality of a male during mating,’ said Shichang Zhang of Hubei University in Wuhan, China.

Spiders use their webs as giant hearing aids to amplify audio vibrations through their legs, a new study has revealed.

Researchers from Binghampton University set out to understand how orb-weaving spiders – the species famously featured in ‘Charlotte’s Web’ – detect sounds.

They found that the spiders use their webs as extended auditory arrays to capture sounds, which are then vibrated through their legs.

This technique could give spiders advanced warning of incoming prey or predators, according to the team.

Philoponella prominems occur most often in China, Korea and Japan and belong to a family of spiders that do not contain venom.

The male spiders use a joint in their first pair of legs, called the tibia-metatarsus, to fling themselves away from their partners at impressive speeds, clocked at up to 88 cm/s (35 inch/s).

‘We found that mating was always ended by a catapulting, which is so fast that common cameras could not record the details clearly,’ said Zhang, who led the study.

The few males the researchers saw that didn’t catapult were promptly captured, killed, and consumed by their female partners.

When the researchers prevented males from catapulting, they met the same fate.

Of 155 successful matings they witnessed, 152 survived by catapulting away.

With high-resolution video cameras, the researchers calculated an average peak speed of catapulting spiders of about 65 cm/s (25 inch/s). Speeds ranged from about 30 cm/s (12 inch/s) to almost 90 cm/s (35 inch/s).

As they soar through the air, the males also spin around 175 times per second on average. 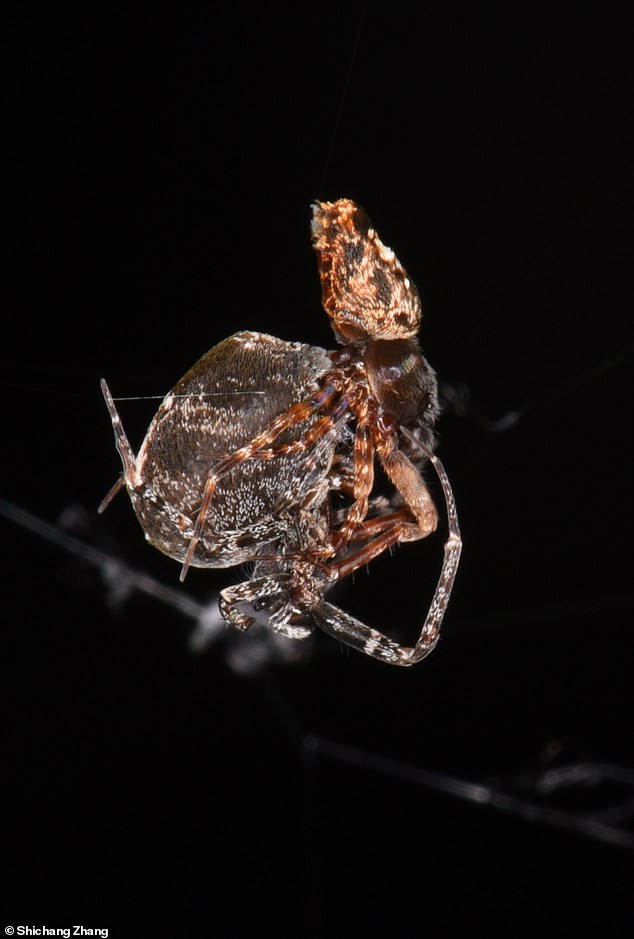 The male spiders use a joint in their first pair of legs, called the tibia-metatarsus, to fling themselves away from their partners at impressive speeds, clocked at up to 88 cm/s (35 inch/s).

The males manage to catapult at these speeds by folding their tibia-metatarsus joint against the female. When released, hydraulic pressure allows for rapid expansion.

The researchers say that the findings show clearly that the catapulting behaviour is required to avoid sexual cannibalism.

‘We observed that males that could not perform the catapulting were cannibalized by the female,’ Zhang said.

The research was published in the journal Current Biology.

ARACHNOPHOBIA IS IN OUR DNA

Recent research has claimed that a fear of spiders is a survival trait written into our DNA.

Dating back hundreds of thousands of years, the instinct to avoid arachnids developed as an evolutionary response to a dangerous threat, the academics suggest.

It could mean that arachnophobia, one of the most crippling of phobias, represents a finely tuned survival instinct.

And it could date back to early human evolution in Africa, where spiders with very strong venom have existed millions of years ago.

Study leader Joshua New, of Columbia University in New York, said: ‘A number of spider species with potent, vertebrate specific venoms populated Africa long before hominoids and have co-existed there for tens of millions of years.

‘Humans were at perennial, unpredictable and significant risk of encountering highly venomous spiders in their ancestral environments.’