EXPRESS INFORMER > Sports > Malawi 2-1 Zimbabwe: The Flames come from behind and get their Africa Cup of Nations up and running

Malawi 2-1 Zimbabwe: The Flames come from behind to get their Africa Cup of Nations up and running after a Frank Mhango brace helps Meke Mwase’s men to victory

Malawi’s Frank Mhango scored twice as they stunned southern African rivals Zimbabwe with a 2-1 victory in Group B at the Africa Cup of Nations.

The result meant his side kept their second round hopes alive at the Kouekong Stadium in Bafoussam on Friday after picking up their first win of the tournament.

Ishmael Wadi put Zimbabwe ahead in the first half on 38 minutes, but Mhango levelled just before the break. 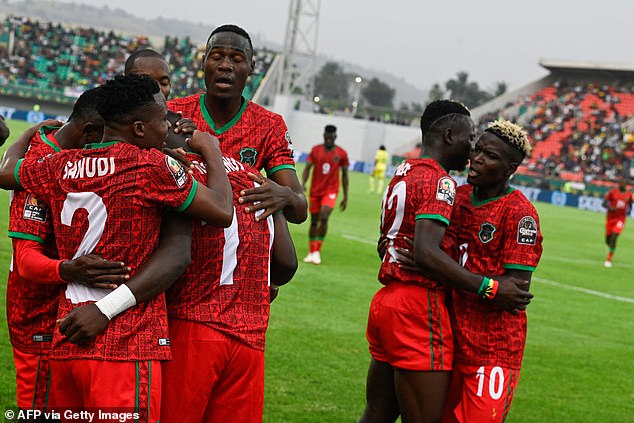 He then added the second after 58 minutes as he took advantage of some hesitant defending and supplied a poacher’s finish.

Malawi have three points from two games and lie third in the group behind Senegal and Guinea, who each have four. Zimbabwe have lost both of their matches to date.

Malawi, whose only other win at the Cup of Nations was a 3-0 success over Algeria in 2010, play Senegal in their final Group B game at the same venue on Tuesday, while Zimbabwe will meet Guinea in Yaounde.