Ma’Khia Bryant, the 16-year-old girl shot dead by a Columbus police officer on April 20, was laid to rest on Friday as it was revealed more than a dozen 911 calls were made from her foster home since 2017, including one call made by her sister two weeks before the tragedy.

The family said their final goodbyes to the teenager on Friday at the First Church of God in Columbus, where two other funerals were held in recent months for black people shot and killed by police.

Bryant was shot dead by a cop while she was swinging a knife at two people during an fight outside the home.

Since her death is has been revealed that 911 calls had been made from her foster home for the past four years, which Bryant’s lawyer said shed a light on issues with the state’s foster care system.

On March 28, just a few weeks before Bryant was killed, her biological younger sister, Janiah, 15, told a 911 dispatcher, ‘I don’t want to be here no more,’ according to records obtained by the Associated Press.

She told police she wanted to be placed in a different home.

Informed that wasn’t something police could do, ‘The victim then became irate and stated that if she does not get to leave, then she was going to kill someone in the home,’ a police report said. The girl was later taken to a hospital for an evaluation. 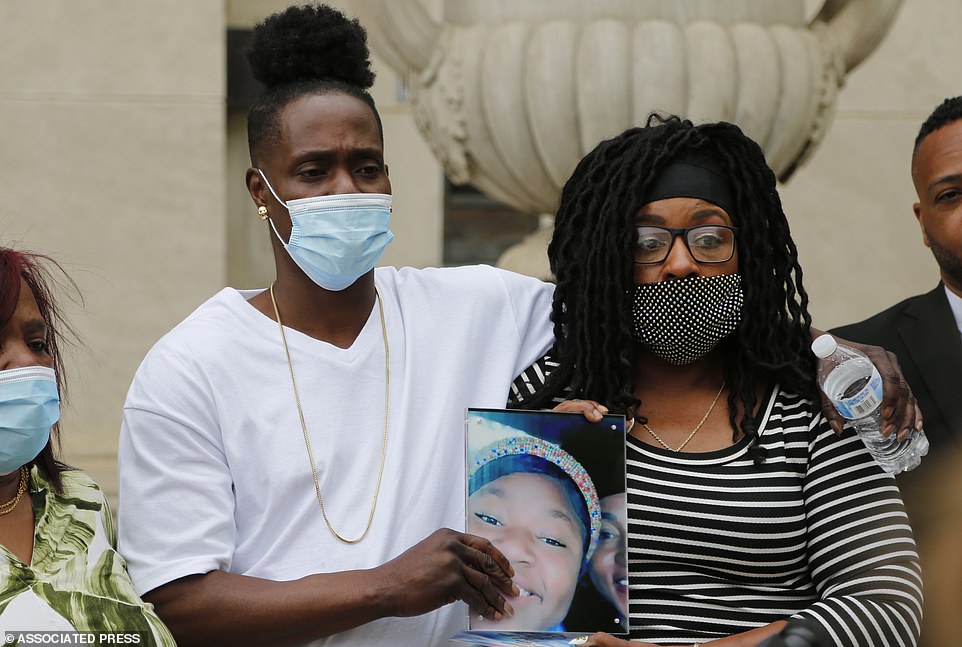 Myron Hammonds and Paula Bryant, the father and mother of Ma’Khia Bryant, hold a photo of their 16-year-old daughter during the funeral 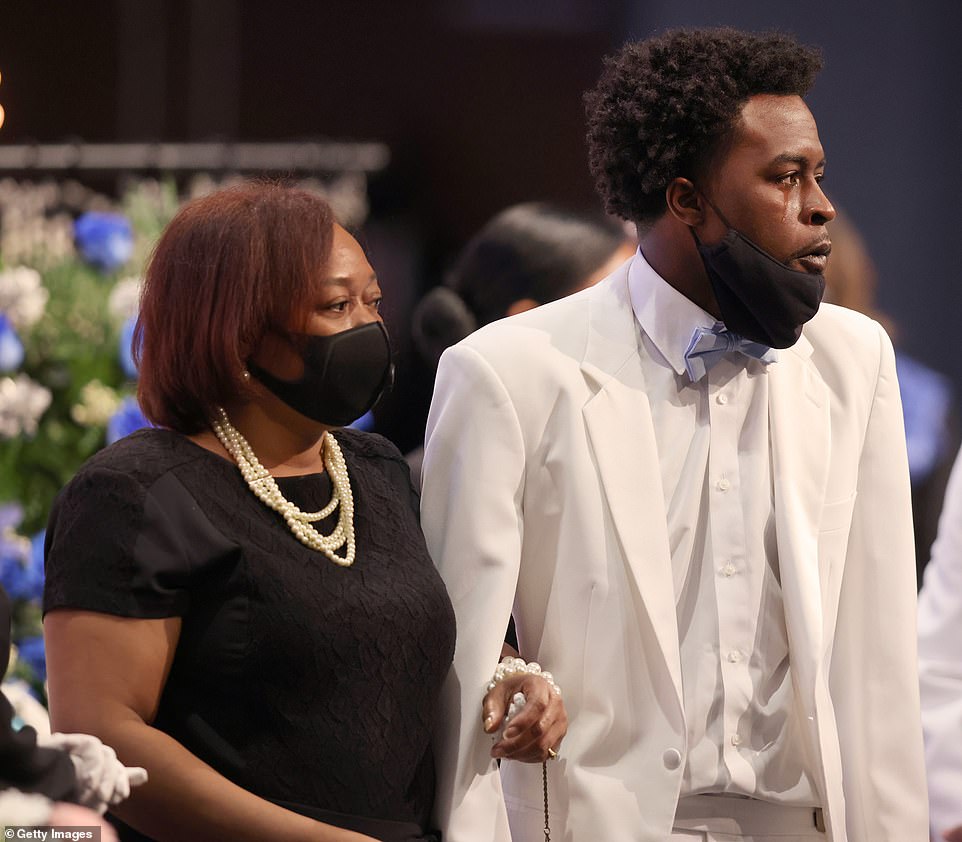 Khalil Bryant, Ma’Khia’s brother, in tears during his sister’s funeral at the First Church of God in Columbus, Ohio, on Friday afternoon 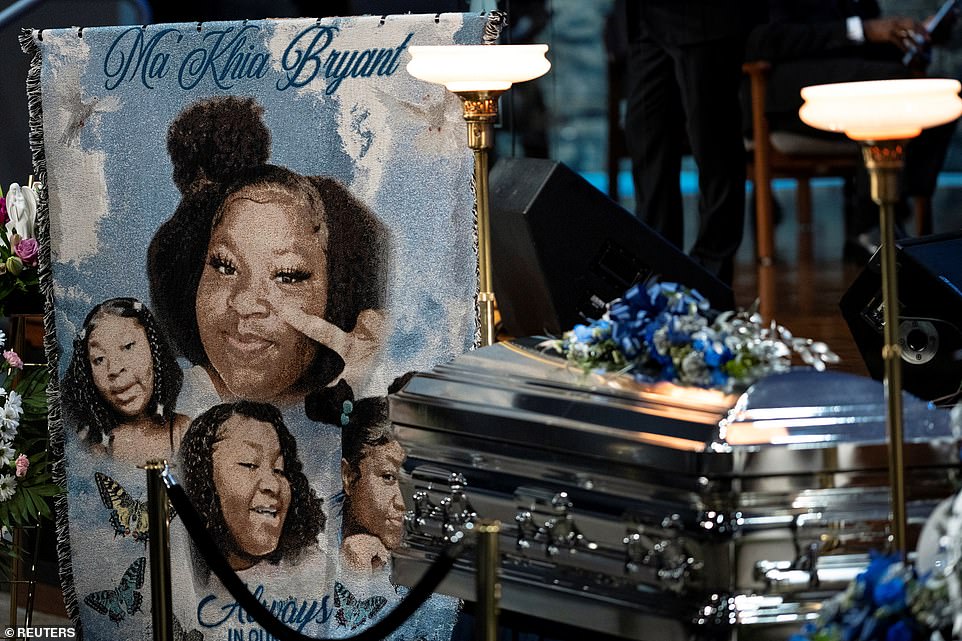 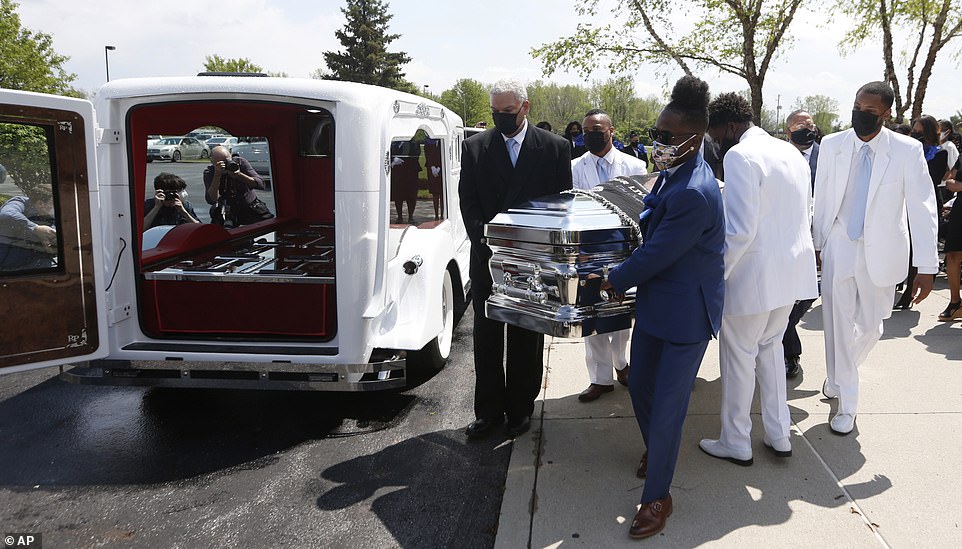 Pallbearers carry the Bryant’s casket out following Friday’s service, as it was revealed Bryant’s sister dialed 911 from their foster home a fortnight before she was killed 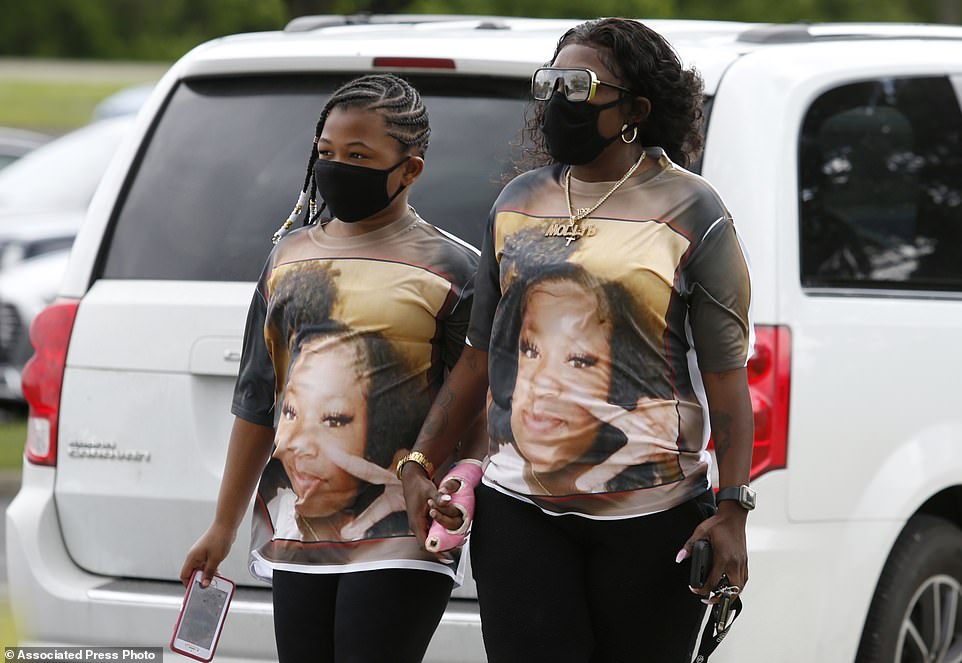 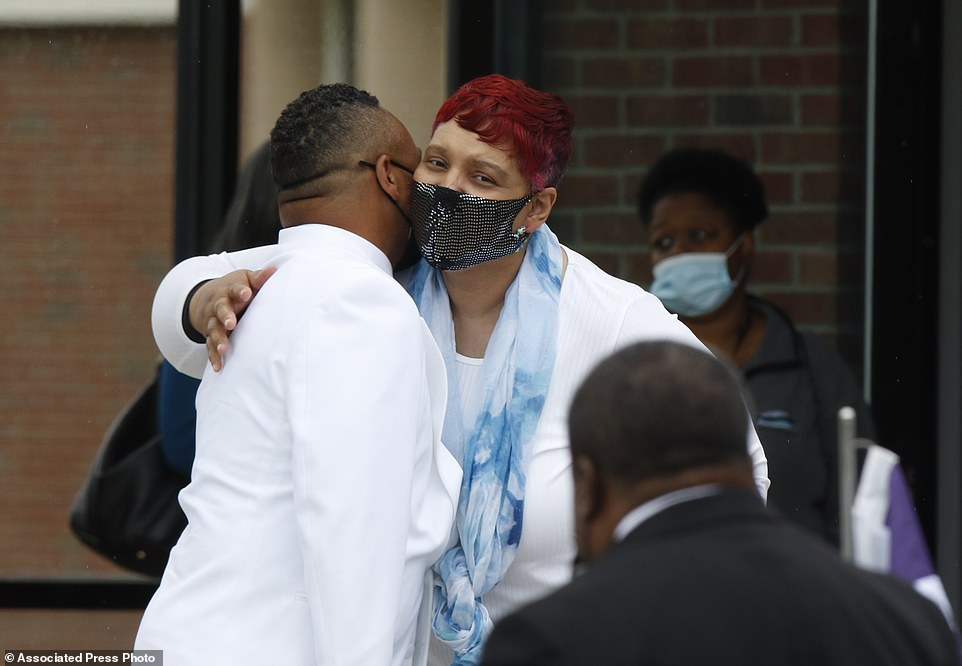 Mourners embrace outside of the First Church of God in Columbus, Ohio, at Friday’s funeral service for Bryant 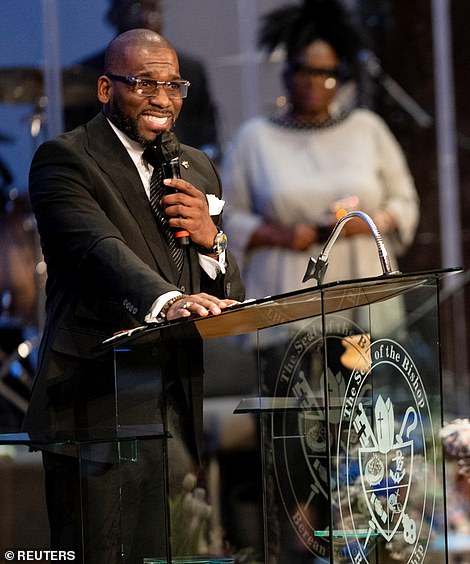 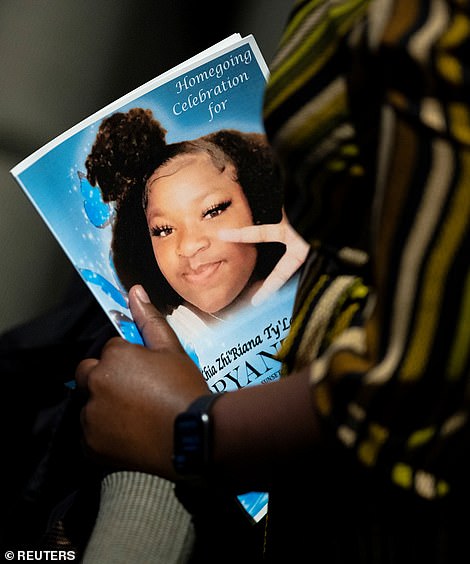 A speaker delivers a eulogy at Bryant’s funeral, while a mourner holds a program for the service, billed as a ‘homecoming celebration’ 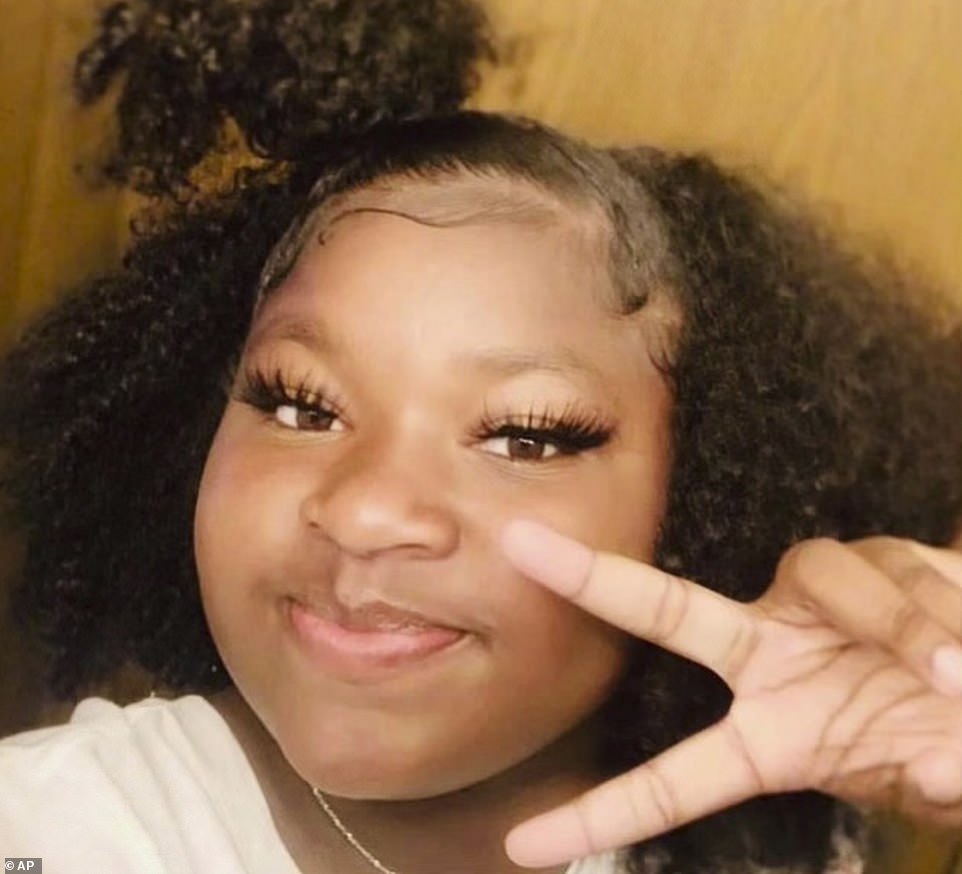 Bryant, pictured, was shot dead the day Derek Chauvin was convicted of murdering George Floyd, with an investigation into her death continuing

Questions remain about what could’ve been done differently in the years before Officer Nicholas Reardon, a white cop, shot Bryant, a black teenager, after he responded to a fight involving Bryant.

The shooting heightened tensions in Ohio’s capital city over fatal police shootings of black people, but Bryant’s lawyer was more focused on how the state’s foster care system failed Bryant.

Bryant’s family lawyer, Michelle Martin, called for an investigation of the system and whether girls in the foster home were properly supervised.

Most of the 911 calls made from the home were made by Angela Moore – the home’s foster mother – looking for help with foster girls who left without permission or didn’t return after being out, according to documents and 911 calls obtained by The Associated Press through a records request.

‘The whole world has placed Ma’Khia on trial based on this one incident,’ Bryant’s lawyer Michelle Martin said. ‘But why ‘aren’t we looking further and figure out who were those girls?’

‘How did this develop so quickly? What trauma was not being addressed within the home?’ Martin said. ‘I mean so many questions that have to be answered.’

Bryant had only been in the home since February, but Martin said she had been in the foster care system for too long.

Ma’Khia’s biological mother Paula Bryant, 42, told DailyMail.com that she lost custody of Ma’Khia along with three other children four years ago. Her last words were at a supervised visit at a child care center five days the teenager was killed.

The treatment of black children by Ohio’s foster care system is already under scrutiny. Last month, a review ordered by Republican Gov. Mike DeWine found it was infused with racial inequity. 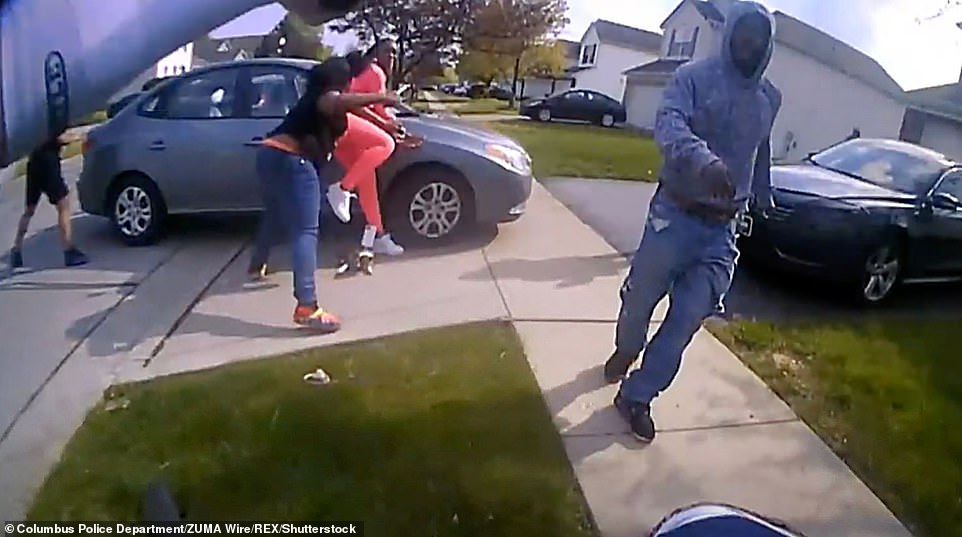 Ma’Khia Bryant is seen holding a knife while lunging toward another girl in police bodycam footage taken in Columbus, Ohio, on April 20 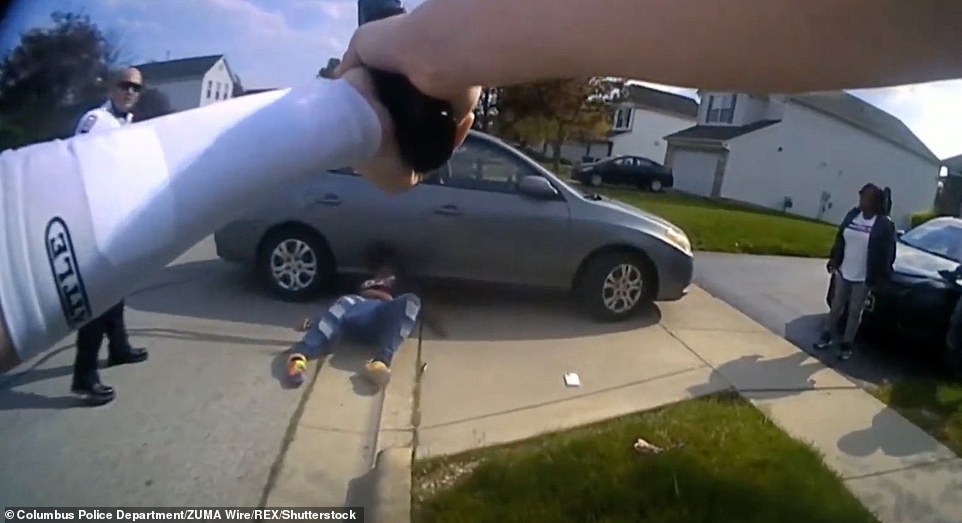 Bryant is pictured on the ground after the shooting 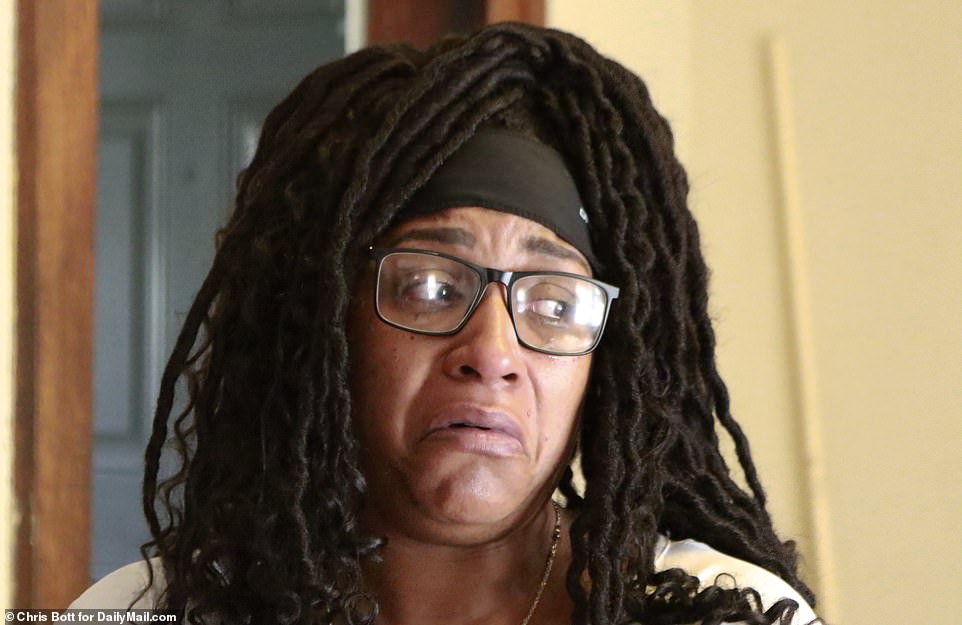 Paula Bryant, 42, Ma’Khia’s biological mother, told DailyMail.com that her younger daughter, Janiah, 15, ‘has said to me it happened so fast. Ma’Khia was her best friend, they were almost like twin sisters. She’s crying constantly, she’s grieving. She said, mommy, I couldn’t save Ma’Khia’

Among other findings, the children´s services system sometimes failed to value black voices and experiences and poorly equipped foster parents to raise multiracial families, sometimes resulting in the children in their care experiencing racism.

Feb. 12, 2017: An 18-year-old woman told police that she was going to kill herself because Moore won’t let her leave. Moore said the woman’s biological mom was at the house trying to take her daughter.

July 6, 2018: Moore reported that a child, who was in the home since March, left with a friend and didn’t return.

Nov. 8, 2020: Moore reported that a 13-year-old foster girl left the house after an argument with her

The system also left foster youth unprepared for adulthood and foster parents struggling to help them, the report found. In response, the state has launched a new approach to recruiting and retaining foster parents and ordered caseworkers to take racial equity training.

Advocates say the review barely scratched the surface of the racial inequity that pervades every corner of the system.

‘The foster care system in Ohio failed Ma’Khia on a number of levels,’ said Dot Erickson-Anderson, administrator for the advocacy group Ohio Family Care Association. ‘It’s a system that has been struggling for a long time with our image of what a family is.’

But Erickson-Anderson, who is also a former foster parent, said Franklin County, where Bryant lived, is actually one of the state’s better counties in terms of working through the ‘racism that is embedded’ within the system.

Records show the children in Moore’s care were all black, as is Moore. Records involving foster homes and their parents are not public under state law.

It shouldn´t be a surprise when children leave their foster homes because typically they´re not happy to be there in the first place, said Michelle Johnson-Motoyama, a professor at Ohio State University´s College of Social Work.

Two days after Bryant was killed, Franklin County Children Services said it has an obligation to make changes.

‘We are committed to ensuring that our programming and services most appropriately address the needs and concerns of those we serve,’ the agency said. ‘We continue in our efforts to dismantle the practices that have historically created barriers for those who are marginalized, especially our children.’ 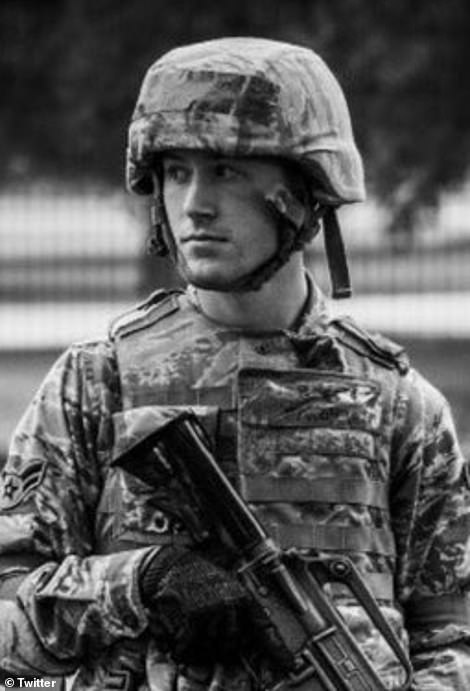 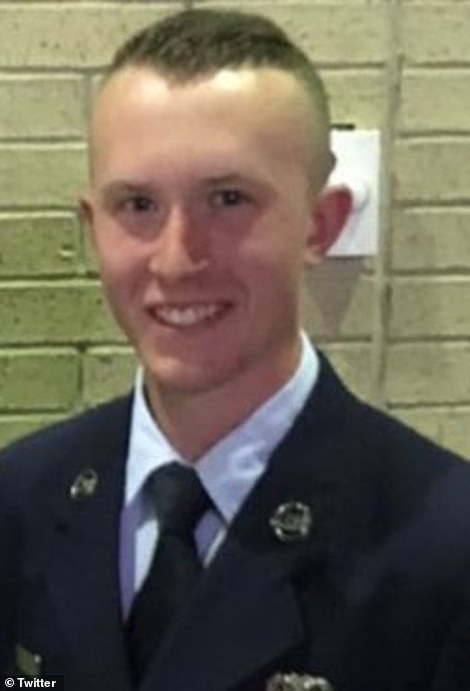 Nicholas Reardon has been identified as the Columbus PD cop who shot and killed Bryant. He is also a member of the Air National Guard

Critics of police use of force and witnesses of Bryant´s shooting – including Bryant´s father and grandmother – have demanded to know why the officer, Nicholas Reardon, didn´t use other tactics to stop Bryant short of shooting her, such as deploying a stun gun.

But many use of force experts and even some civil rights attorneys have said the officer followed his training and may have saved the girl Bryant was attacking. The national Fraternal Order of Police called the shooting ‘an act of heroism, but one with tragic results.’