EXPRESS INFORMER > Health & Medicine > Make your own way to hospital… to save the NHS! Paramedic says crisis needs ’emergency measures’

Women in the late stages of labour should drive themselves to hospital instead of getting an ambulance because of the ongoing crisis in emergency departments, a paramedic suggested today.

Kristin Houlgate, who works for South Western Ambulance Service, said she is not confident NHS ambulances can ‘provide a safe level of service to the British public’ due to staffing crises and record demand.

She said paramedics should perhaps only be called out to Category 1 or 2 patients who are at immediate risk of dying — including those suffering strokes and cardiac arrests.

The medic suggested less urgent Category 3 and 4 calls should be left to make their own way to hospital.

This includes women in late stage labour, and patients with non-severe burns and diabetic complications.

The ambulance crisis has hit boiling point in recent weeks, leaving elderly Britons waiting in agony for up to 14 hours for an ambulance.

Heart attack and stroke patients have had to wait for up to 70 minutes in the most extreme cases.

Some ambulance trusts have already hit the panic button and told the least urgent patients to make their own way to hospital. 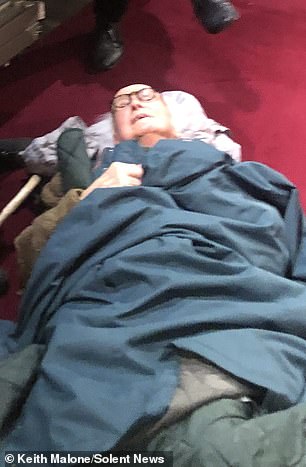 Kristin Houlgate (left), who works for South Western Ambulance Service, said she is not confident NHS ambulances can ‘provide a safe level of service to the British public’. Right: A pensioner, 93, who suffered a suspected broken hip at Christ Church in Bath, Somerset, on March 25, had to be tended by the vicar – because his ambulance did not show up for 12 hours 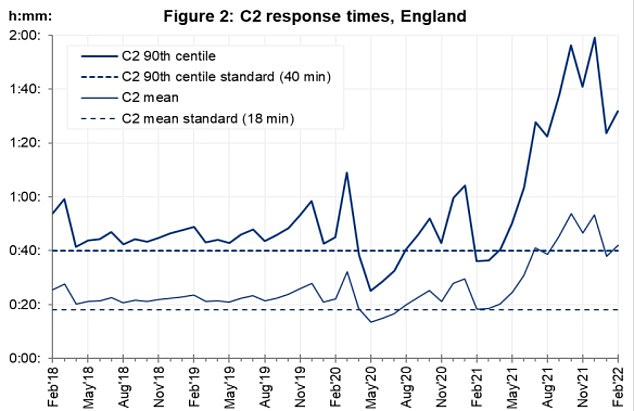 Graph shows: NHS ambulance response times to category 2 calls — which include stroke and chest pain — in England from February 2018 to this year 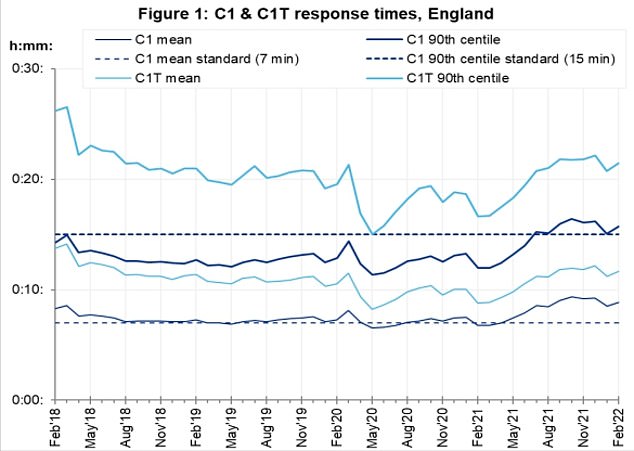 Graph shows: NHS ambulance response times to category 1  calls — which include cardiac arrest — in England every month up to 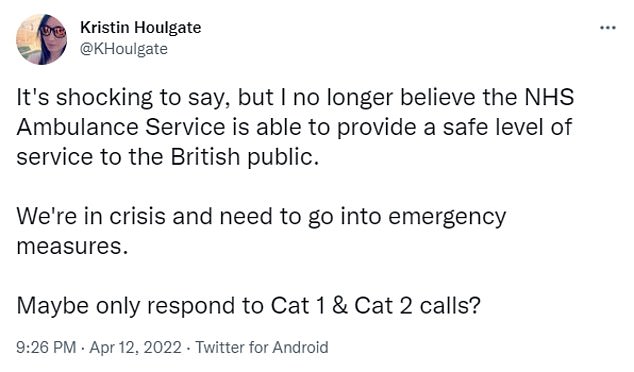 Nurses and teachers have hit out against a Tory MP who claimed they had work drinks after shifts in lockdown to justify why Boris Johnson should not resign.

Some revealed how they took work breaks in their cars due to how strict they believed social distancing rules were at the time.

‘You couldn’t even have a break with someone in the same room let alone a drink after work,’ according to one nurse.

Unions said NHS staff were just happy to ‘get home, clean their uniforms, shower and collapse into bed’ after watching patients die during their shift.

The Prime Minister was fined by police yesterday for attending a party in the Cabinet room in breach of the lockdown rules he himself created.

A number of Tory MP’s leapt to Mr Johnson’s defense among them Michael Fabricant, the member for Lichfield, who told BBC yesterday that the Prime Minister acted as many nurses and teachers did during the pandemic.

‘I don’t think at any time he thought he was breaking the law… he thought just like many teachers and nurses who after a very long shift would go back to the staff room and have a quiet drink,’ he said.

Writing on Twitter, Ms Houlgate said: ‘It’s shocking to say, but I no longer believe the NHS Ambulance Service is able to provide a safe level of service to the British public.

‘We’re in crisis and need to go into emergency measures. Maybe only respond to Cat 1 & Cat 2 calls?’

Category 1 ambulance calls include any case when a patient is at at immediate risk of dying, including cardiac arrests. NHS ambulances aim to get to these patients within 15 minutes.

Category 2 calls involve serious conditions such as stroke or chest pain that require immediate attention and urgent transport. Health officials aim to reach 90 per cent of these cases within 40 minutes.

Ms Houlgate said her patients have waited longer than five hours in the back of an ambulance, while queues of 14 vehicles piled up outside emergency departments.

Her ambulance trust — which serves areas in the South West including Bristol, Bath, Gloucestershire, Somerset, Devon and Cornwall — has been approached for comment.

South Central Ambulance Service, which cover neighbouring regions, last week declared a critical incident due to the ‘increased challenges in releasing some of our ambulances from busy acute hospitals’.

The service, which covers 7million residents across Berkshire, Buckinghamshire, Hampshire, Oxfordshire, Sussex and Surrey, asked the community to only call 999 in an emergency.

Huge levels of demand caused the service to declare the incident, which meant it could focus on Category 1 and 2 calls.

Ambulance services across England have been at breaking point for weeks, with stroke and heart attack sufferers having to wait 70 minutes for a ride.

It comes as Emlyn Roberts, a 69-year-old pensioner, was left waiting for 10 hours for an ambulance after falling on the pavement in Colwyn Bay, North Wales.

Members of the public called 999 around 12:30pm on March 29, but were told to expect delays. An ambulance finally arrived around 11pm.

His sister-in-law, Lynn Roberts, said: ‘He was left for ten hours lying on the concrete, you can forgive a couple of hours, even a few hours if necessary, but ten hours is just not acceptable.’ 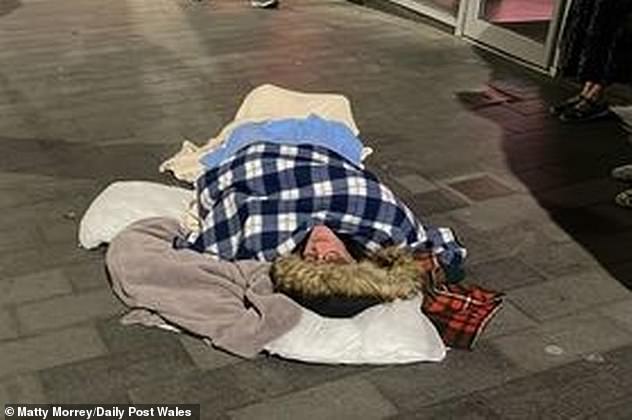 Emlyn Roberts, 69, had tripped and broken his hip and back while walking in the town centre of Colwyn Bay, North Wales, at approximately 12.30pm on March 29. (Pictured: Mr Roberts covered with blankets while waiting for ambulance) 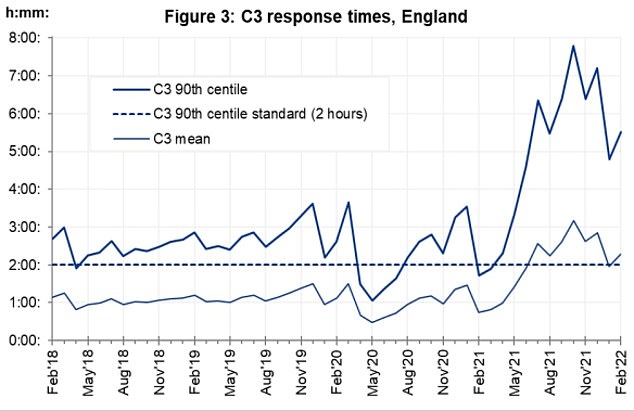 Graph shows: NHS ambulance response times to category 3 calls — which include uncomplicated diabetic issues — in England every month up to 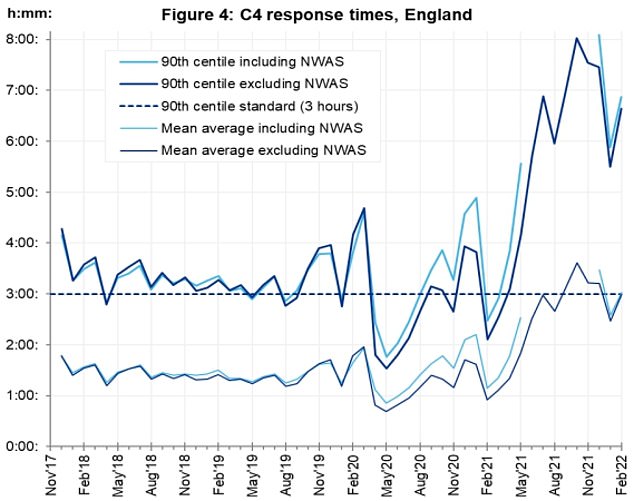 Graph shows: NHS ambulance response times to category 3 calls — which include uncomplicated diabetic issues — in England every month up to

Another pensioner who suffered a suspected broken hip at Christ Church in Bath, Somerset, on March 25, had to be tended by the vicar — because his ambulance did not show up for 12 hours.

The man told reporters that he was in ‘exquisite’ pain lying crumpled on the floor when he fell.

The elderly man was left waiting on paramedics until the following morning, with his wife sitting next to him on the floor, holding his hand the entire time.

Ambulance waiting times have hit unprecedented highs over the last year, with patients dying in the back of ambulances waiting outside of hospitals last November.

The crisis is being exacerbated by staff absences because of high Covid prevalence but is being primarily driven by sky-high A&E pressures.

Last week, millions of patients were told not to go to A&E unless they were in life-threatening condition.

West Yorkshire Association of Acute Trusts, which covers 2.5million people, warned of waits of up to 12 hours in emergency departments.