Freedom Day is unlikely to see the majority of English people stampeding out to celebrate the end to restrictions with a hedonistic spirit of excess, a new poll reveals today.

More than half (55 per cent) of those polled by YouGov for the Times today said they believed Boris Johnson was wrong to drop Covid restrictions today, amid concerns at spiralling Covid cases.

Fewer than a third (31 per cent) said they would be happy to go to a party within the next few weeks, with 53 per cent saying they would not.

A similar amount (34 per cent) said they would be happy going to the theatre now that restrictions are gone, against 48 per cent who would not.

And the hesitancy is not just prevalent among older English people – only 20 per cent of those aged 18 to 24 said they would be happy to visit a nightclub, with more than half (53 per cent) saying they would stay away.

Mr Johnson’s decision to replace lockdown laws with voluntary guidance today has put England at odds with other parts of Britain.

Wales and Scotland are easing some of their rules today but laws requiring masks and some social distancing are staying in place for at least the next few weeks.

A separate poll by YouGov today shows that pubs, gyms, cinemas and care homes top the list of places people are most uncomfortable about visiting. 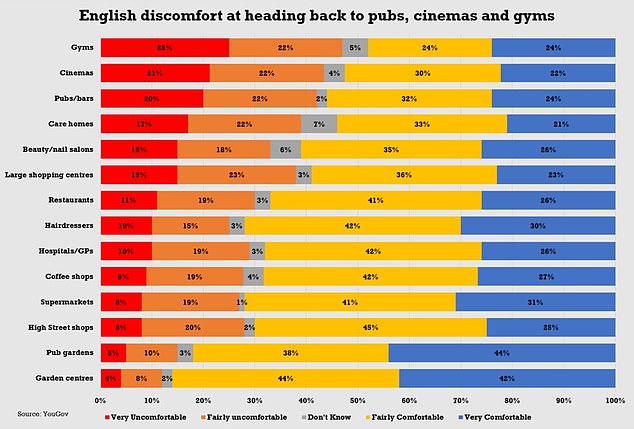 Eir Nolsoe, data journalist at YouGov, said: ‘While on balance the public do still feel more comfortable than not visiting places like shops on the high street and restaurants, there are many consumers who don’t feel safe returning to places they normally go to once they reopen without restrictions.

‘What might concern businesses more though is that English consumers’ confidence in returning has fallen over the last few months – from previous highs in May – just when they were hoping to get back to normal.

‘We’ve seen over the last weeks a debate over where the public are expected to keep their masks on after today but previous polling has shown that the public believes masks should continue to be mandatory for some time in places like shops and on public transport.

‘And while some businesses and transport operators will continue to encourage the wearing of them, getting consumers to feel like they can return risk-free, at a time when cases are rising and there are numerous calls to halt unlocking, could be the next obstacle on the road to economic recovery.’

The PM is marking the grand unlocking alone at Chequers after performing a comical U-turn from initially saying he and Rishi Sunak would dodge quarantine despite having met Health Secretary Sajid Javid – who has tested positive.

But the lifting of almost all legal restrictions have merely fuelled fears about spiking cases bringing the economy grinding to a halt, as more and more people are doomed to house arrest.

Experts estimate around 1.7million people are still self-isolating after being ‘pinged’ by the NHS Covid app or contacted by Test and Trace.

Many firms say their sites are having to open with reduced hours or shut completely because up to a quarter of staff are off as a precautionary measure – with scientists warning the situation could spiral as the UK faces up to 200,000 cases a day.

The Road Haulage Association has warned of impending chaos in supply chains, with chief executive Rod Mackenzie telling the FT: ‘Far from freedom day being freedom day, it’s going to be disaster day.’

In a key concession today, frontline NHS workers will be exempted from the rules to prevent hospitals having to cancel operations because of staff shortages.

But this morning vaccines minister Nadhim Zahawi appeared to dash hopes that the exemption could be ditched for the double-jabbed before August 16, as well as suggesting that the sensitivity of the app will remain the same for the time being.