A Sydney family may never have their dream home after the firm contracted to build their house folded with outstanding debts at $2.4million.

The Garozzos had signed the building company in November 2020 to build a two-storey, four-bedroom property on land they purchased in North Kellyville, in the city’s north-west.

But the family is now residing in an apartment with their house unfinished after costs soared from $800,000 to $1.9million, reports News.com.au.

The Garozzo family signed the 10-year firm in November 2020 to build a two-storey, four bedroom house on land they purchased in North Kellyville. Stock image

The Garozzos face the possibility of forfeiting $200,000 in expenses they had already sunk into their home.

‘We still don’t even have a slab on our property, and our builder has gone into liquidation. We put down a $150,000 deposit…and we can’t move forward,’ Mrs Garozzo said.

Problems arose soon after the family had signed on with the firm in 2020. The property, which included a swimming pool, was expected to be completed in four months’ time – or by March 2021.

The family claim that no work was done on the property from June to mid-November before contractors returned briefly towards the end of last year. The site has remained untouched since late December and appears empty. 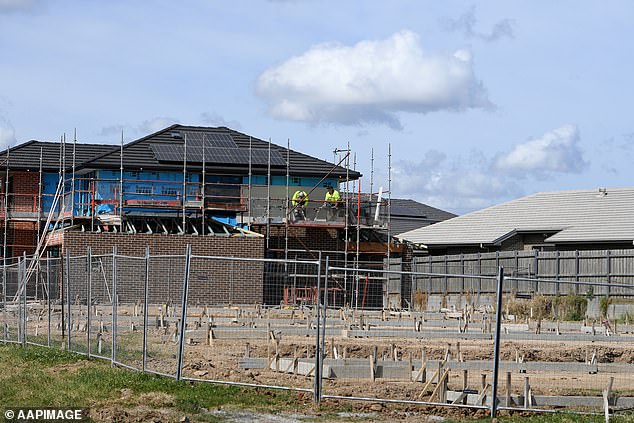 The property was expected to be completed by March 2021 but progress stalled for months as tradesmen were involved in disputes with the building firm. Stock image

The Garozzos were in constant contact with the company throughout the ordeal until February.

One month later, the firm sent out a letter announcing they had gone into liquidation.

The company reportedly owed $2.4million, including thousands of dollars to tradesmen, bricklayers, a roofing company and a stone supplier.

The Garozzos copped the biggest financial loss out of the list of 45 creditors, news.com.au reported.

They’ve now been given a revised figure on the cost to complete their house, which sits at $1.9million.

Mrs Garozzo has since called for improved regulation in the building and construction industry. Jada Group could not be reached for comment.