Off on a stag night? Majestic deer is spotted ‘waiting for a train’ on a remote Highland station platform

This is the incredible moment a stag was seen wandering up a sleepy Scottish station platform, as if waiting for the next train.

In the video, the stag is seen wandering up the platform, as if waiting for the next train to arrive.

A stag wanders up the platform at Achnasheen Railway Station in Scotland on September 7, as if waiting for the next train

Seemingly having grown impatient, the stag then hops over a wire fence and starts trotting down the road.

The animal only stops to look back when John leaves the station and starts to follow it.

John was lucky to have come across the stag, having only stopped at the train station to use their facilities. 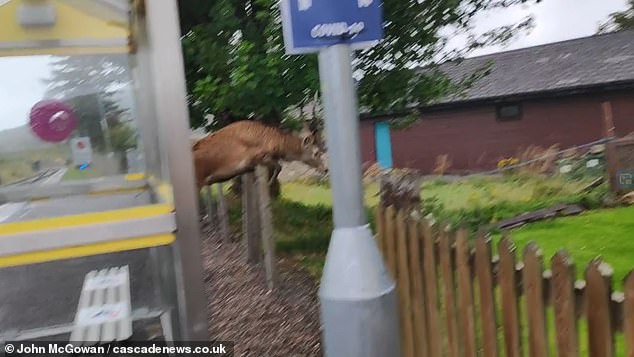 After seemingly growing tired of waiting, the stag decides to hope over a wire fence and make its journey on foot 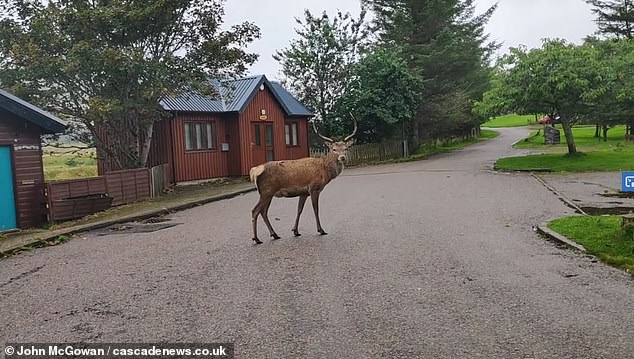 The video was published onto the Strictly Highland Photography Facebook page later that day.

The caption alongside the video said: ‘This morning, our commute took us to the Isle of Skye on assignment.

‘We stopped off at Achnasheen Station to let the team make the most of the facilities.

‘While there, I noticed that there was only one gentleman at the shelter waiting for the arrival of the train. I’m sure he didn’t mind me filming him.’