A Maine man has died from a rare brain infection he contracted by being bitten by a tick, health officials believe.

Maine Center for Disease Control and Prevention (Maine CDC) reported the death of the unnamed man on Wednesday, noting the Powassan virus as the cause of death.

The rare virus creates a dangerous brain virus for which there is no cure, no vaccine and no known antiviral treatments.

Experts at the Maine CDC are warning that residents and visitors to the state take care in areas where ticks might be present to prevent themselves from getting bit.

‘Ticks are active and looking for a host to bite right now,’ director of the Maine CDC Nirav D. Shah said, as reported by WMTW.

‘I urge Maine people and visitors to take steps that prevent tick bites.’

The virus is spread from animal to human usually via a tick or woodchuck bite.

A person will often feel symptoms of the virus somewhere between a week and a month after the tick bite.

The Maine man was reported to have suffered severe neurological symptoms as a result of his infection, one of the normal symptoms of the virus.

He was receiving treatment for his infection in a hospital when he died.

Other common symptoms of the virus include a fever, headache, vomiting, weakness, confusion, seizures or memory loss.

The Centers for Disease Control and Prevention reports that a majority of people that are infected with the virus are asymptomatic. 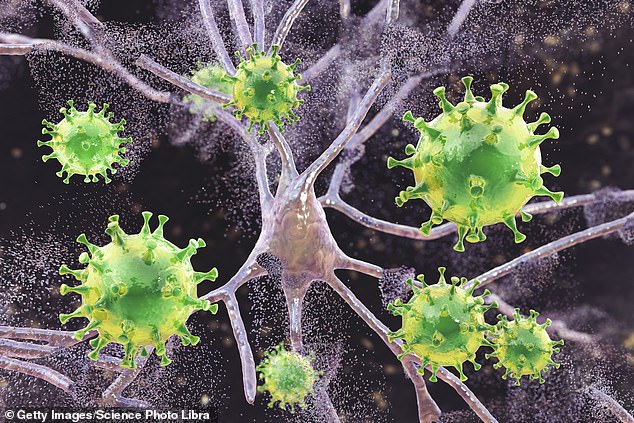 The Maine CDC has reported 14 cases of the virus since 2010, and around 25 cases are reported every year nationwide

Experts at the Maine CDC warn that people who may be camping or hiking in a wooded or bushy area should be weary of ticks.

People should avoid going into deep brush in the state, and instead stick to established trails and routes.

A person should also make sure to cover up to avoid being bitten, and also used bug spray to ward off any critters.

If a person does enter an area where there is a high risk of being exposed to a tick, they should make sure to regularly check themselves for bites, and make sure to shower and thoroughly wash themselves and their clothes after.

Cases of the Powassan virus are extremely rare, the Maine CDC reports, with only 25 cases reported around the country every year.

In Maine, 14 cases have been reported over the last 12 years, though the prevalence of asymptomatic infections means the figure is likely an undercount.