Forget Zoom – a new holographic device allows business leaders to beam themselves into meetings in real-time from anywhere in the world.

Proto M, created by a Los Angeles firm called Proto, is a two-foot tall box that presents livestreamed holograms of people’s bodies as they talk, even when they’re thousands of miles away and in another country.

The new ‘holoportation’ device presents a scaled-down version of the speaker, as if he or she has been shrunk down by ‘Wonkavision’ – the fictional technology depicted in the 1971 film ‘Willy Wonka & the Chocolate Factory’.

MailOnline had a chat with Proto’s CEO David Nussbaum, who was appearing as a hologram in the Proto M while at his home in Los Angeles.

In MailOnline’s London offices, the science team tried out the Proto M device, which is soon shipping for customers. Pictured is Proto CEO David Nussbaum in the device, speaking to MailOnline 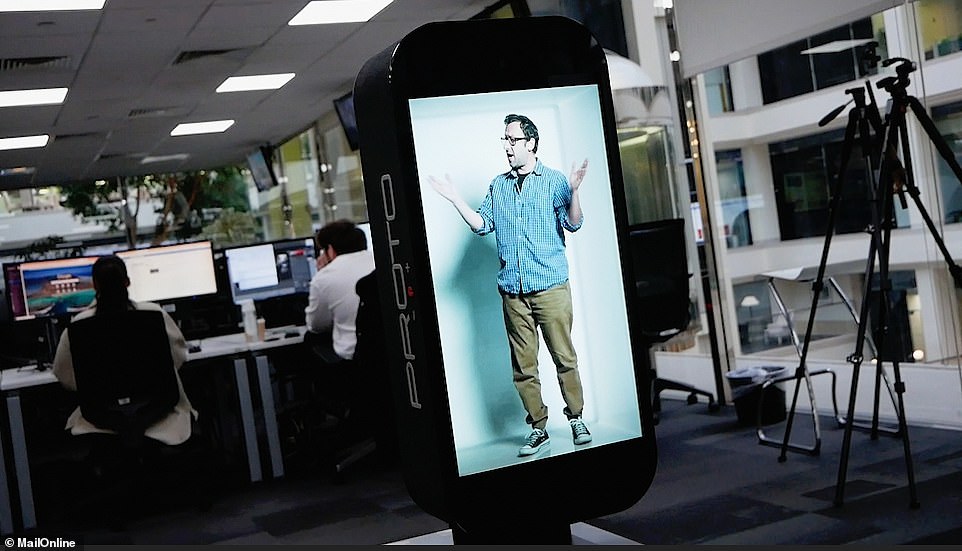 ‘I’m trapped in here!’: In conversation with MailOnline, Nussbaum (pictured) said ‘holoportation’ technology represents the next era in terms of communicating between two people

WHAT IS PROTO M?

Somewhere between a box and a giant tablet, it presents livestreamed holograms of people’s whole bodies as they’re speaking.

The person who appears as a hologram is  at the other end is stood in front of a blank background with a camera in front of them.

Proto M is self contained and portable – it has onboard microphones, cameras and speakers.

In conversation with MailOnline, Nussbaum said the technology represents the next era in terms of communicating between two people, and a bridge between the physical and the virtual.

‘I’ve always believed the future of communication is about true connections; it wasn’t always about projecting yourself on a flat screen,’ he said.

‘As a fan of science fiction and television and film growing up, to me the future was always evolving – from the written letter to the telephone call to email to FaceTime, and now here we are, it’s a true “holoportation” experience.

‘I appear like I’m a guy trapped in a box. This is how I believe people should be broadcasting – with their full body. People see a full body and they can have a deeper connection with the person beaming in.

‘This is how world leaders will meet. This is how individual people will congregate.’

Nussbaum appeared as though he was inside the Proto M, which is a bit like a giant tablet with a touchscreen, except that its proportions are more box-like.

The device’s screen creates a perception of depth, making the speaker appear as if they’re trapped inside a small, blank, confined room.

To beam the speaker’s body and let them converse with people on the other end, Proto M just needs to be plugged into a power supply and hooked up to Wi-Fi.

The speaker, meanwhile, needs to be stood in front of a blank background with a camera on a tripod pointing at them, whether it’s a pro camera kit or an iPhone camera. Otherwise it’s the same as any two-way internet video call, like Zoom or FaceTime. 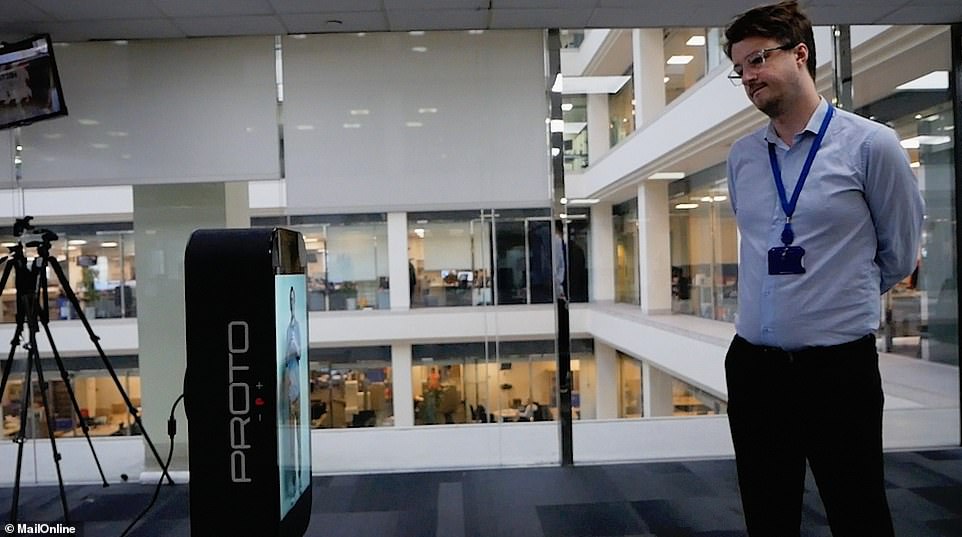 Speaking from ‘inside’ Proto M, CEO David Nussbaum told MailOnline’s Jonathan Chadwick that people should be broadcasting their whole body during virtual experiences 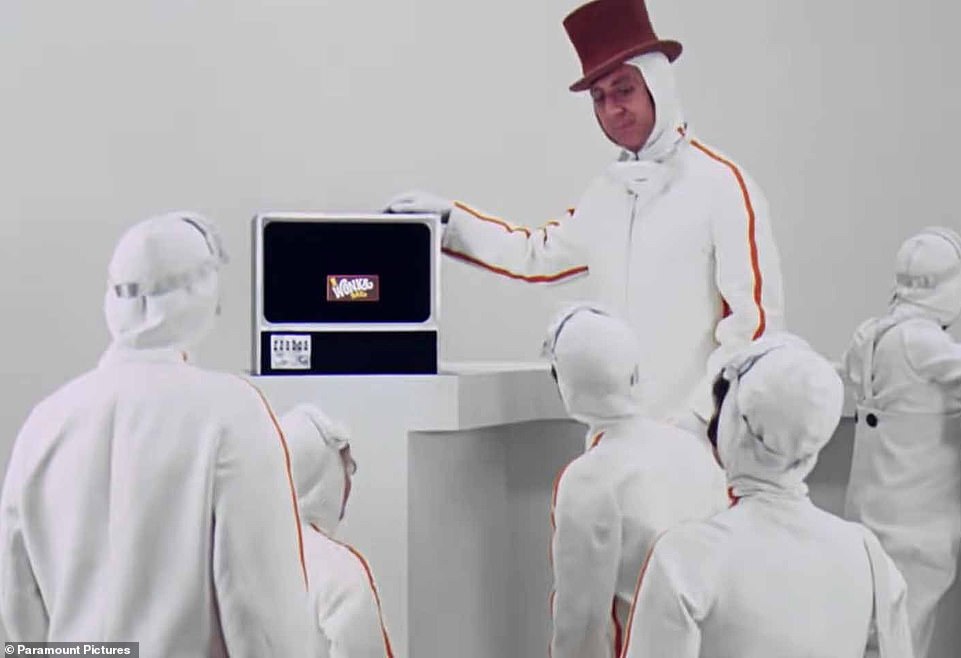 In a scene from Willy Wonka & the Chocolate Factory (1971), protagonist Charlie Bucket is able to reach inside a screen and pull out a shrunk chocolate bar

Holoportation is a new type of technology that allows high-quality 3D models of people to be transmitted anywhere in the world in real time.

It allows users to see, hear, and interact with remote participants in 3D as if they are actually present in the same physical space.

Communicating and interacting with remote users becomes as natural as face-to-face communication.

According to Nussbaum, Proto M is a ‘communal’ device that has multiple uses in the workplace and the home – such as a business leader speaking remotely in front of his or her employees, a fitness instructor teaching a client, or a family member speaking to a loved one.

‘Wouldn’t it be cool if Timmy and Grandpa, even though they might be living 8,000 miles away from each other, could connect in a way that they haven’t been able to before,’ he said.

‘We’ve seen over the last three years now with Covid people are relying more and more on virtual interactions as opposed to physical interactions.

Nussbaum said his product isn’t intended to replace more conventional video calls or in-person experiences; rather, it’s an alternative option that blends elements of both.

MailOnline found the experience was without the lag typical of a Zoom call, while the hologram of Nussbaum was impressively clear and lifelike.

Like something out of an episode of Black Mirror, it was just as if he’d been shrunk down to an eighth of his real size and inserted inside a box with a clear glass cover.

As well as facilitating two-way communications, Proto M also plays pre-recorded messages and can display realistic 3D images of what products look like, such as the new iPhone. 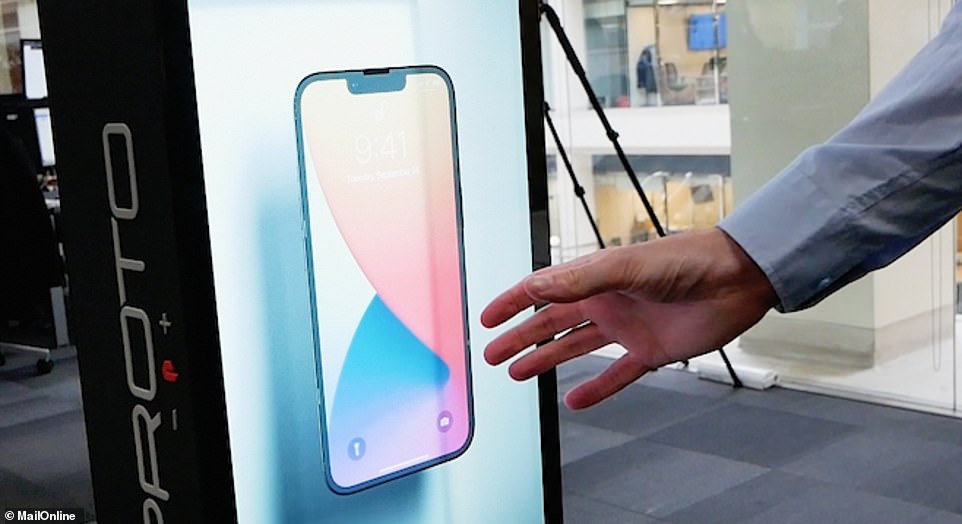 MailOnline was also played a selection of pre-recorded promo messages from the likes of Canadian comedian and TV personality, Howie Mandel.

Proto M rotates, going from portrait mode to landscape mode, which will be ideal for gaming use cases in the future, according to Raffi Kryszek, head of hardware innovation at Proto, who set up the device at MailOnline’s offices.

Owners of Proto M can also use the device to show off their NFTs – unique digital tokens that are sold without any physical form. 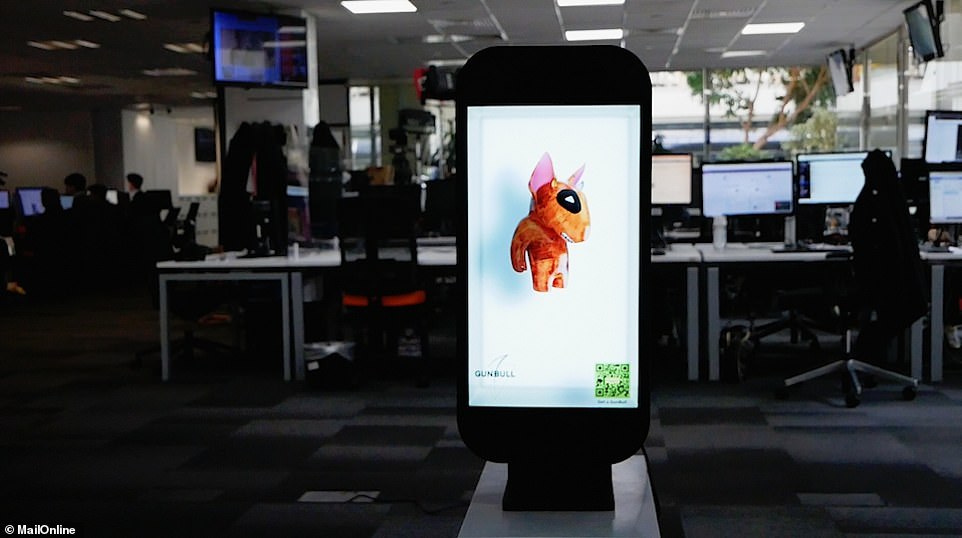 Owners of Proto M can also use the device to show off their NFT artworks. An NFT is a unique digital token that’s sold without any physical form, effectively providing certification of ownership, hailed as a way to sell digital artwork and assets 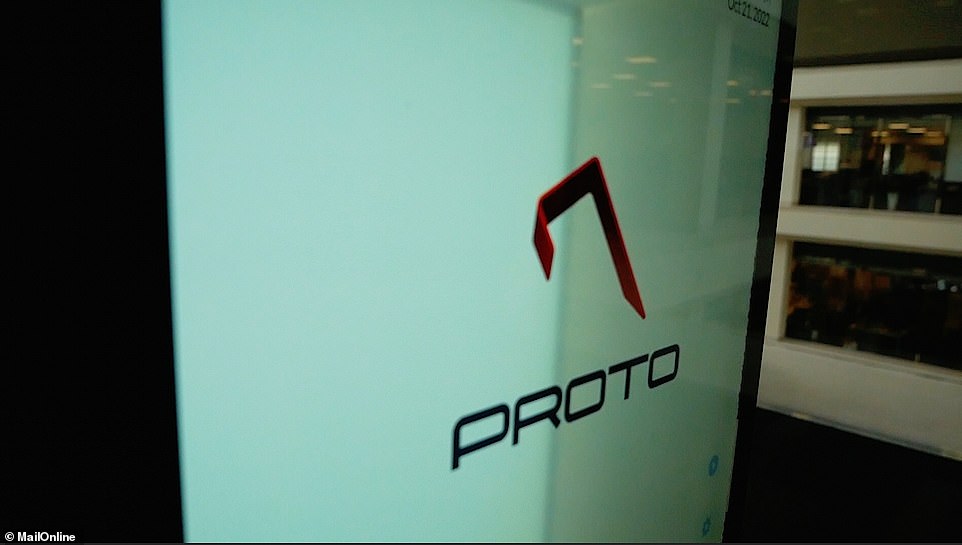 All the device needs is power and an internet connection. Set-up is similar to how you would connect a tablet. A front-facing camera beams a shot of the audience to the speaker

This is Proto’s second device; the first, Proto Epic, is much bigger – about the size of a refrigerator at 7.5 feet – and presents the speaker in larger, more realistic proportions than Proto M.

It’s also a lot more expensive; its base price is $65,000 (£57,000), although the company said it can be leased for cheaper. A Proto Epic is currently at BT’s head office in London.

Proto Epic has been used to beam people internationally for talks and meetings as a more realistic and fun alternative to a mere Zoom call.

Nussbaum uses it several times a week to meet with people abroad – including UK financial firm Schroders which ordered its execs to start using it to avoid jet travel. 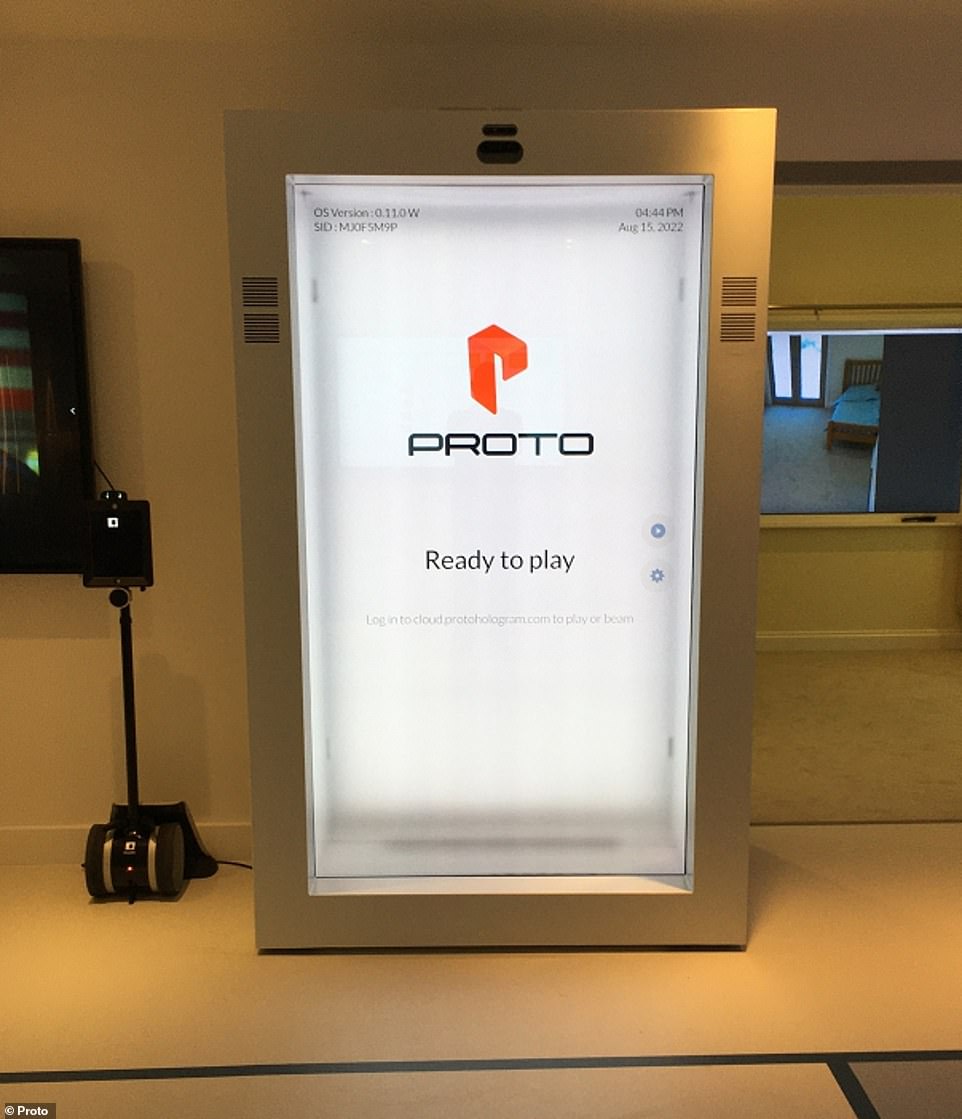 Pictured, a Proto Epic is currently at BT’s head office in London. Proto Epic is bigger – about the size of a refrigerator at 7.5 feet

In addition, it will be used to beam a hologram of former pro boxer Manny Pacquiao from Seoul to Los Angeles for a press conference ahead of his charity bout with DK Yoo in December.

Nussbaum hinted that future versions of his company’s technology might take the hologram outside the box, or barely rely on any hardware at all.

But the ability to reach inside a screen to pull out an edible chocolate bar may be a few more years away.

‘I truly believe that we will be communicating without hardware, but also without wearables either,’ he told MailOnline. ‘There’s a lot more in store; we’re just getting started.’

WHAT IS A HOLOGRAM? 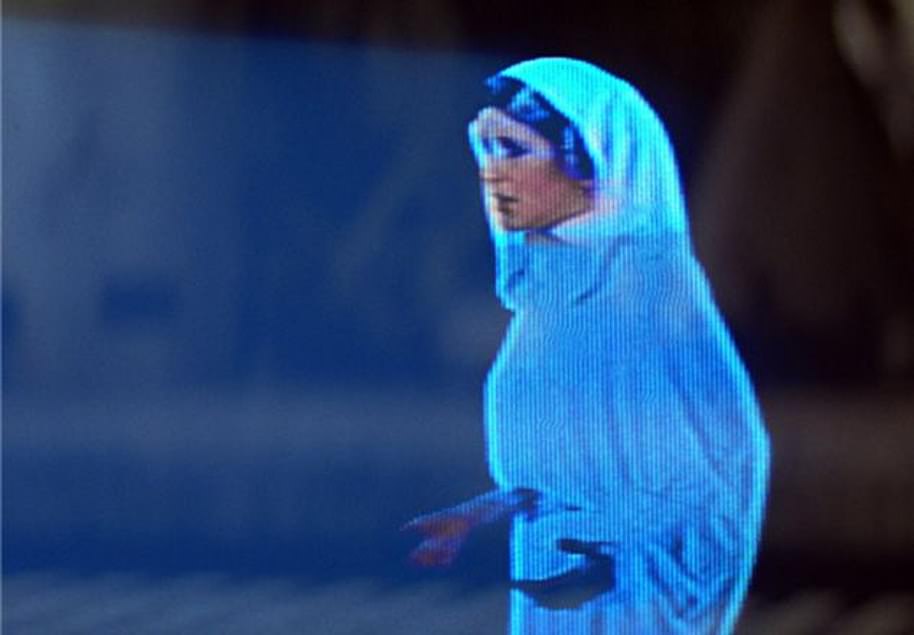 ‘You’re my only hope’: The scene from the first Star Wars film in which a message from Princess Leia is beamed as a hologram for Obi-Wan Kenobi

Until now, the video hologram has generally been confined to science fiction, the most famous example being the projected image of Princess Leia in the first Star Wars film.

Holography is light presented in what appears to be a three-dimensional form.

It is achieved by recording light that is scattered from an object to build a picture of it in reverse.

A laser beam is split into two before half of it is directed at the object, with whatever is bounced back recorded on recording medium, such as photographic paper.

The other half, a reference beam, is directed at the recording medium to help coordinate a clear image.

Interference between the two beams as they intersect is what creates the imprint of the three-dimensional image – which is then projected for us to see.

However existing systems that project moving holographic images are costly and suffer from severe limitations.

Current hologram technology is static, with moving images only achieved through the strobing of images together.

A solution could be found in the form of acoustic levitation, as developed by the researchers at the University of Sussex.