Exhibitors have showed off some of their most exciting gadgets ever at this year’s IFA event, which is taking place this week.

IFA, or Internationale Funkausstellung, is one of world’s leading trade shows for consumer electronics and home appliances, held annually in Berlin.

This year’s IFA runs from September 2-6 and is the first full-scale in-person event for three years, following disruption by the Covid pandemic in 2020 and 2021.

More than 1,000 exhibitors from over 30 countries are presenting products to retailers, buyers and industry experts.

From a colour-changing fridge to an inflatable smartwatch, MailOnline has taken a look at the best gadgets are IFA 2022 in Berlin.

From a colour-changing fridge to an inflating smartwatch, MailOnline has taken a look at the best gadgets are IFA 2022 in Berlin

WHAT IS IFA BERLIN?

IFA, or Internationale Funkausstellung, is one of world’s leading trade shows for consumer electronics and home appliances.

The first IFA event in December 1924 focused on innovations in the radio sector, but it since has encompassed a wide range of technology demos.

In 2020, IFA took place a three-day event with a limited number of participants due to Covid.

It was due to be at capacity in 2021 but was cancelled due to uncertainty about Covid vaccine rollouts.

LG showcased the world’s largest OLED TV with an ‘awe-inspiring’ 97-inch screen – about the size of a double bed.

The firm is yet to reveal a price for the OLED evo Gallery Edition TV, although it’s rumoured to be more than £20,000.

It will ‘deliver immersive viewing experiences on a grand scale’ when it’s released, which should be in time for the FIFA World Cup this November.

OLED TVs use self-lit pixels that can be turned on and off individually to reproduce ‘perfect blacks and incredibly natural colours’.

But LG describes this new TV as ‘OLED evo’, which is essentially a term coined by the Korean company to refer to an OLED display with enhanced brightness.

The huge TV, which is designed to be wall-mounted, is part of LG’s G2 line-up of TVs, which are based on OLED display technology with 4K resolution and flat design.

LG has an enormous booth to itself at IFA 2022 this week to showcase new products, from TVs to gaming monitors and smart home solutions. 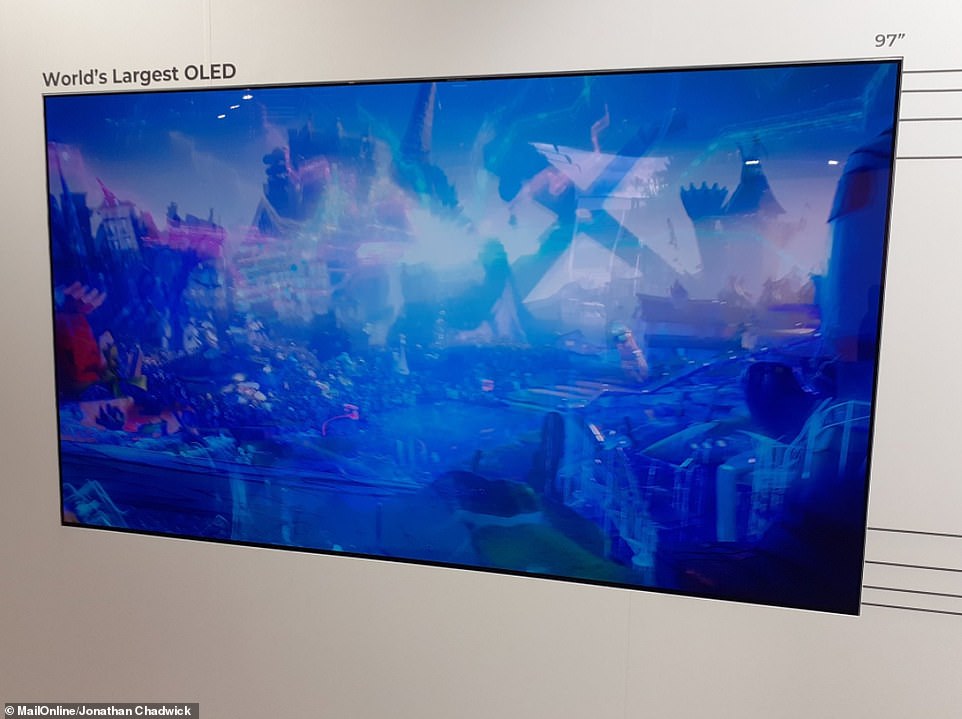 The ‘Flex’ monitor, also from LG, has a 42-inch screen that curves inwards when people are using it to watch TV or play games.

The firm says the OLED display can go from completely flat to ‘spectacularly curved’ for more ‘immersive’ experiences.

Users can curve the screen inwards and then back to flat simply by pressing a button on an accompanying remote control – while the display is on. 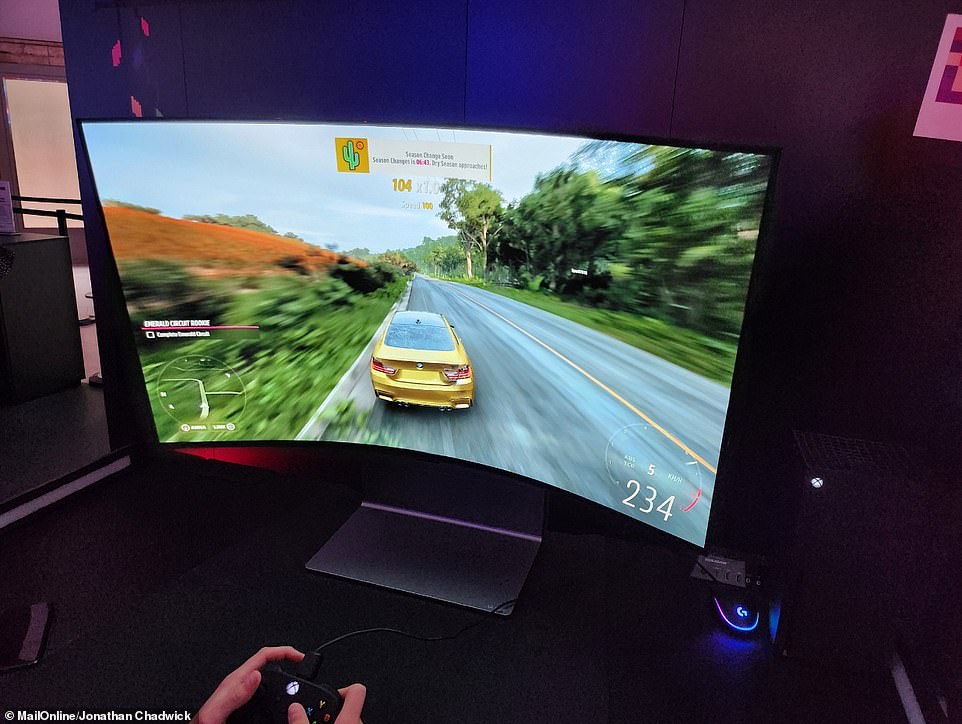 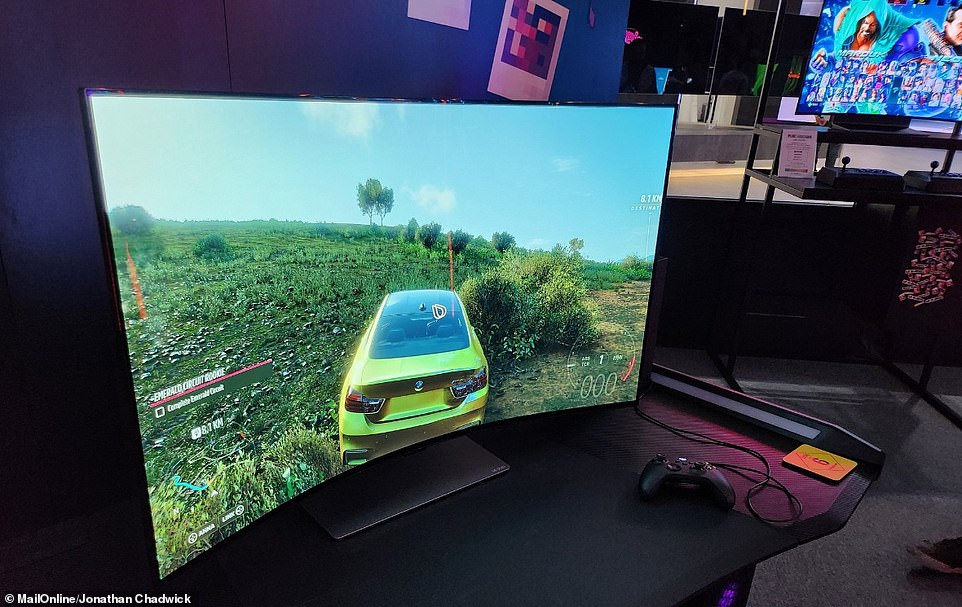 They can also adjust the size of the onscreen image according to their individual preferences or the genre of game they’re playing.

For example, fans of role playing games and racing games will likely want to use all 42 inches of the screen.

Meanwhile, first-person shooter gamers might prefer a 32-inch or 27-inch image that allows them to see everything going on at a glance.

Asus says the touchscreen folds down to a compact 12.5-inch size, making it smaller than a sheet of photocopier paper for carrying in your bag.

Asus says it folds along a precision-engineered 180-degree hinge that is tested to withstand over 30,000 open-and-close cycles.

The company demonstrated this at IFA by attaching the laptop to a folding mechanism, which repeatedly opened and closed the device. 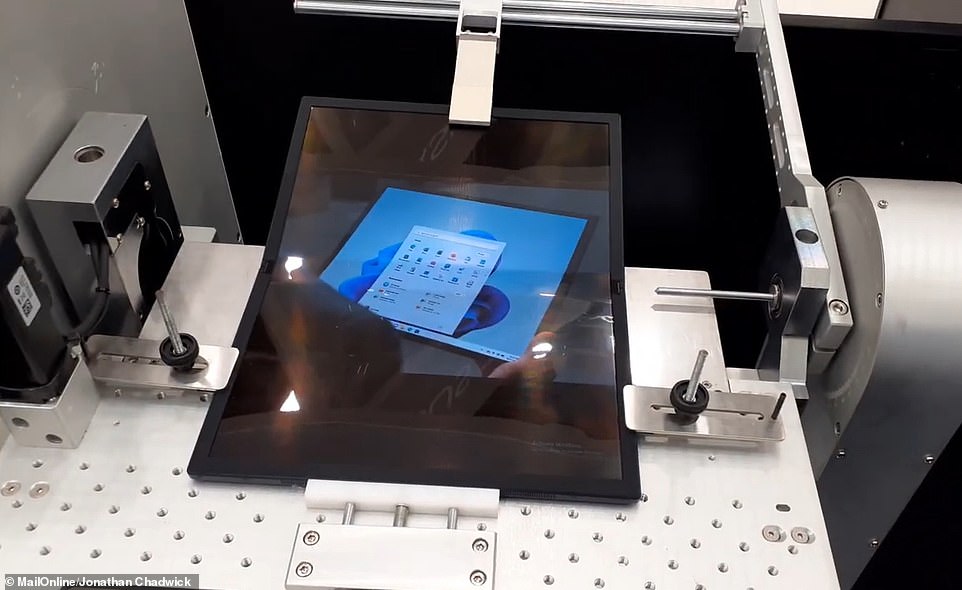 Zenbook 17 Fold OLED from Asus, pictured here at IFA 2022, is a laptop with a 17.3-inch foldable OLED touchscreen 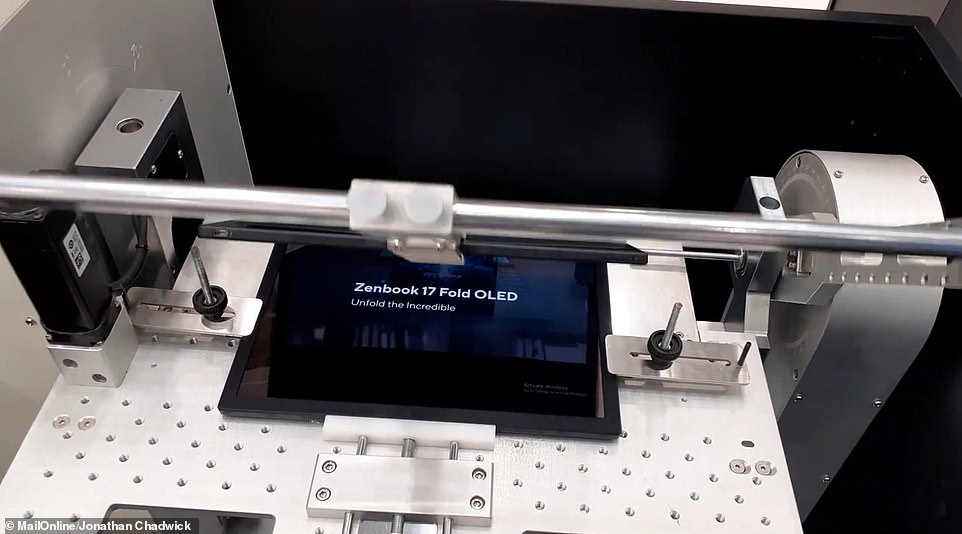 Asus says it folds along a precision-engineered 180-degree hinge that is tested to withstand over 30,000 open-and-close cycles

When unfolded, users can also divide the screen up into segments that each show different applications – for example, Excel, Outlook and Google Chrome.

Zenbook 17 Fold OLED comes with a Bluetooth keyboard, although it also works with a virtual keyboard that takes up one of the screen’s segments.

The device will roll out globally during the fourth quarter (the last three months of the year) but it won’t come cheap – prices start at an eyewatering $3,499 (£3,000).

Possibly MailOnline’s favourite device at IFA this year was the Huawei smartwatch with an inflating strap.

Huawei Watch D inflates around the wrist to take accurate blood pressure readings, just like a cuff around the arm at a doctor’s surgery.

At IFA 2022, MailOnline tried out the device and was given a blood pressure reading in the ‘normal’ range.

Users just have to wear the watch for one minute and keep their arm still as the strap gradually inflates and gets tighter and tighter around the wrist. 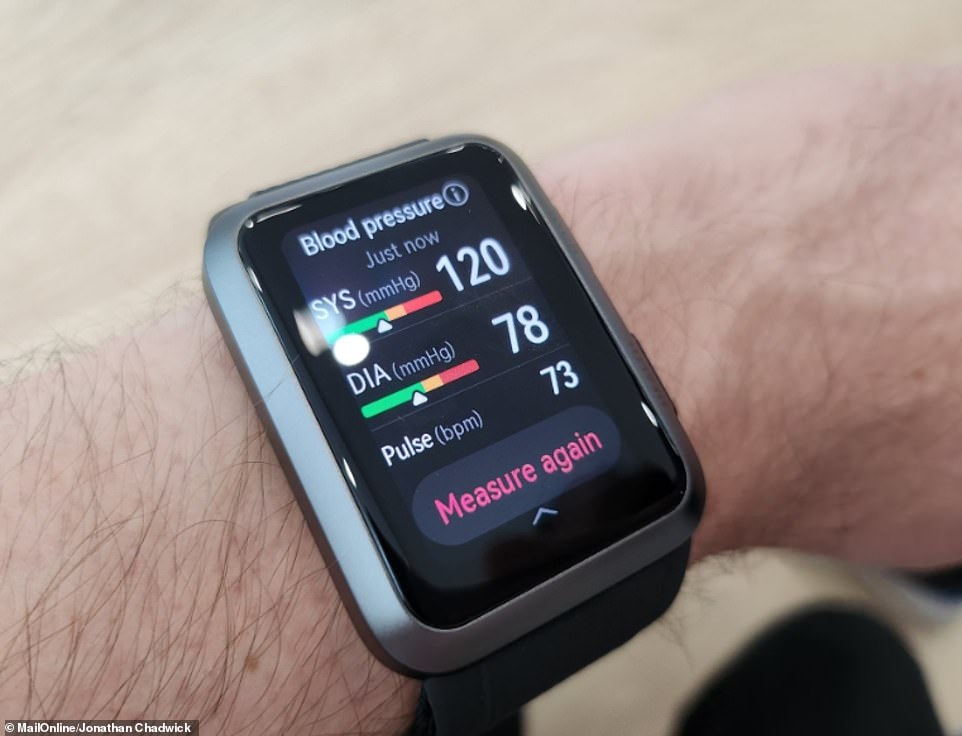 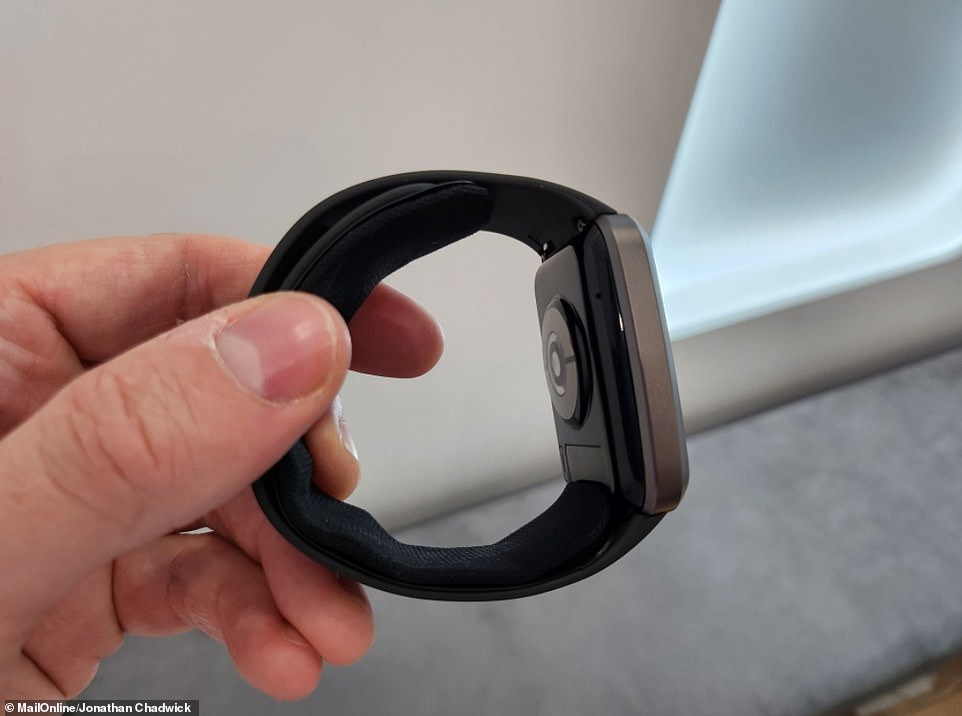 The strap includes a component that gradually inflates, like a cuff around the arm at a doctor’s surgery

Huawei Watch D can also take an electrocardiogram (ECG) test, which can be used to check the heart’s rhythm and electrical activity, although Huawei advises anyone with pacemakers or other implantable devices not to use this feature.

Huawei Watch D will be launched on the European market as a certified medical device, so users can trust that information from it is accurate.

It will retail at £400 and will be available to purchase in the UK from the Huawei Store from October.

LG also revealed a fridge-freezer with colour-changing LED door panels that flash different colours depending on mood and occasions.

Called ‘MoodUP’, the home appliance can turn your kitchen into a disco by blinking like a colourful dancefloor. 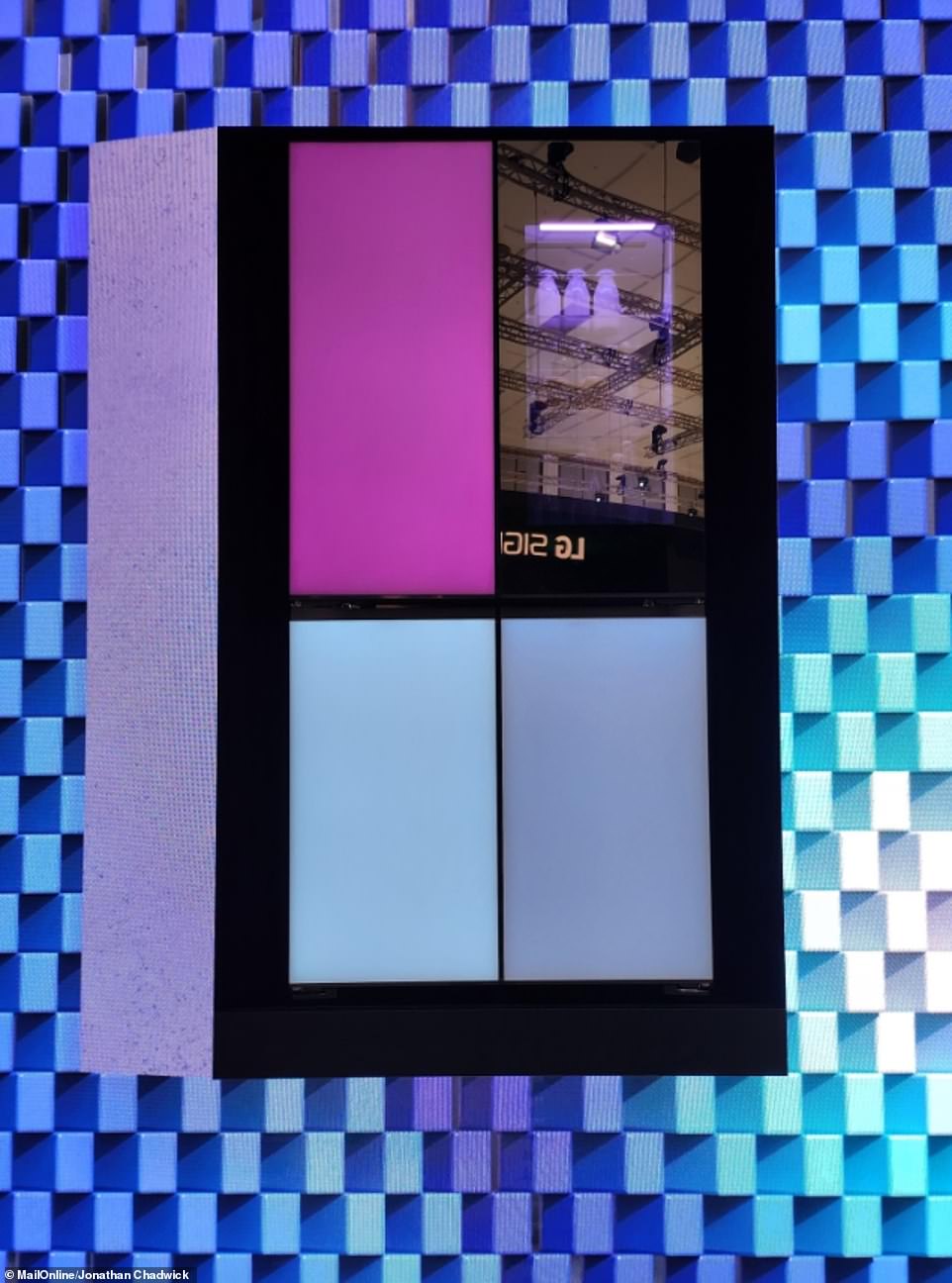 The top right section, one of the two fridge sections, is equipped with LG InstaView, which lets users see inside by knocking, although it can also flash colours like the other three panels

Or users can select a more gentle colour setting of pale yellows and browns, perfect for making the first cup of coffee of the day as the sun comes up.

What’s more, MoodUP is also fitted with a built-in Bluetooth speaker, so the flashing can be synchronized to the beat of music.

Price and release date for the eye-catching new appliance are yet to be confirmed.

Also showcased by LG were two new products for shoe obsessives with an expansive collection – ‘ShoeCase’ and ‘ShoeCare’.

ShoeCase is a ‘space-friendly’ storage solution that’s made up of several modules with transparent covers, each designed to house a pair of shoes.

It provides shoe enthusiasts with a way for to show-off their favourite pairs, offering interior features such as a 360-degree rotating turntable. 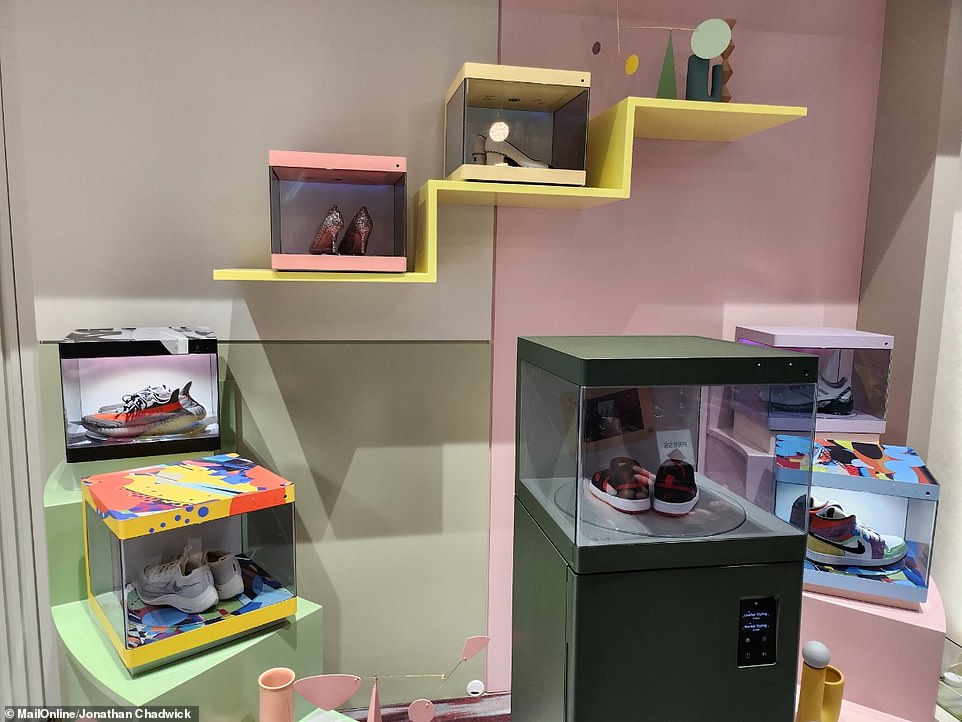 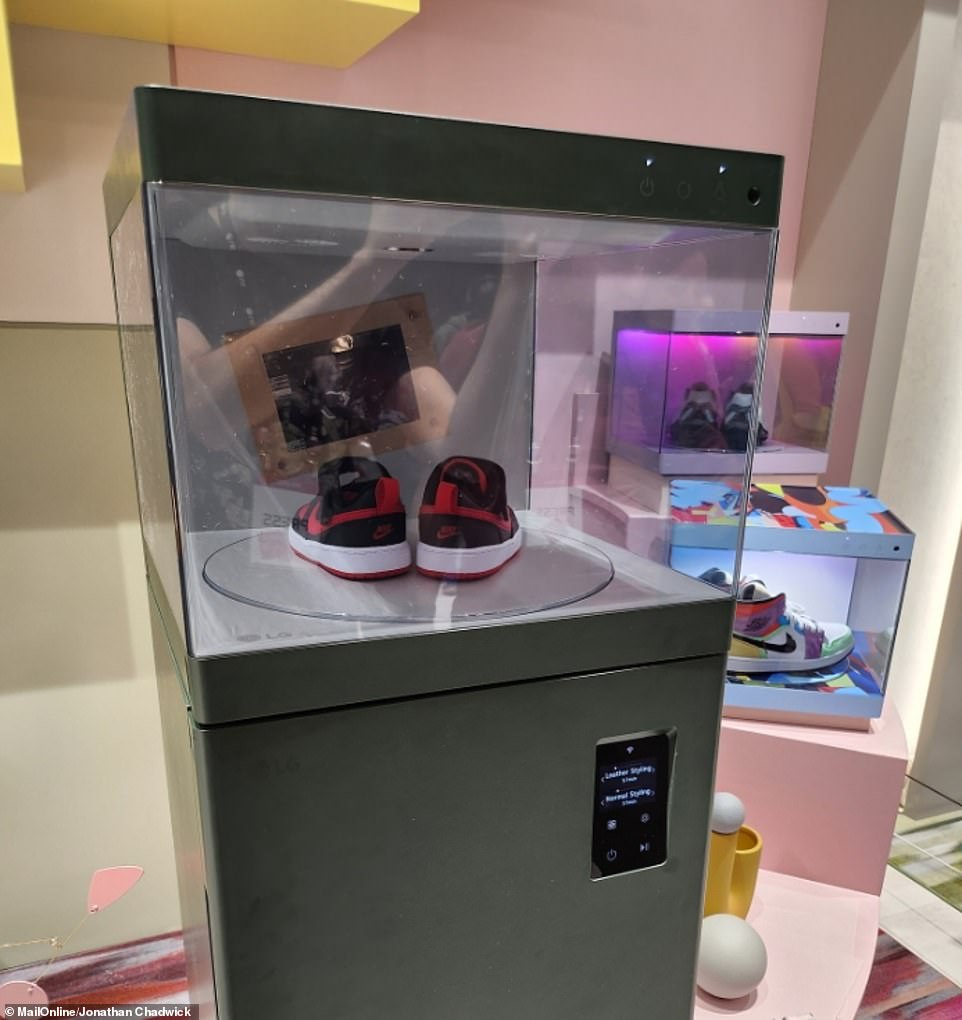 Meanwhile, ShoeCare uses steam to soak up moisture and help remove smells from footwear, whether they’re made of leather, suede or nylon.

Users can put up to four pairs of shoes into ShoeCare and leave them to refresh in a 37-minute-long cycle.

ShoeCare operates at 35 decibels, somewhere between the level of a whisper and a quiet library, which makes sure users aren’t disturbed when they’re trying to listen to records or concentrate on work.

Details of the devices’ pricing and availability are yet to be revealed.

Lenovo used IFA 2022 as an opportunity to launch a new pair of smart glasses, the Lenovo Glasses T1.

The glasses put a computer display inches from the eyes to give users more privacy when they’re working or watching films.

They show content from the device on two OLED screens, one on each lens in front of the eyes, offering a private display for ‘on-the-go content consumption’.

The glasses also have built-in hi-fi speakers near the ears, so users can hear as well as see content, and enjoy a film on Netflix, for example.

The only problem is users have to stay in one spot while using the glasses, as they obscure vision of the real world.

Also, they have to be tethered to the user’s smartphone, tablet or laptop, so mobility is reduced while the glasses are in use. 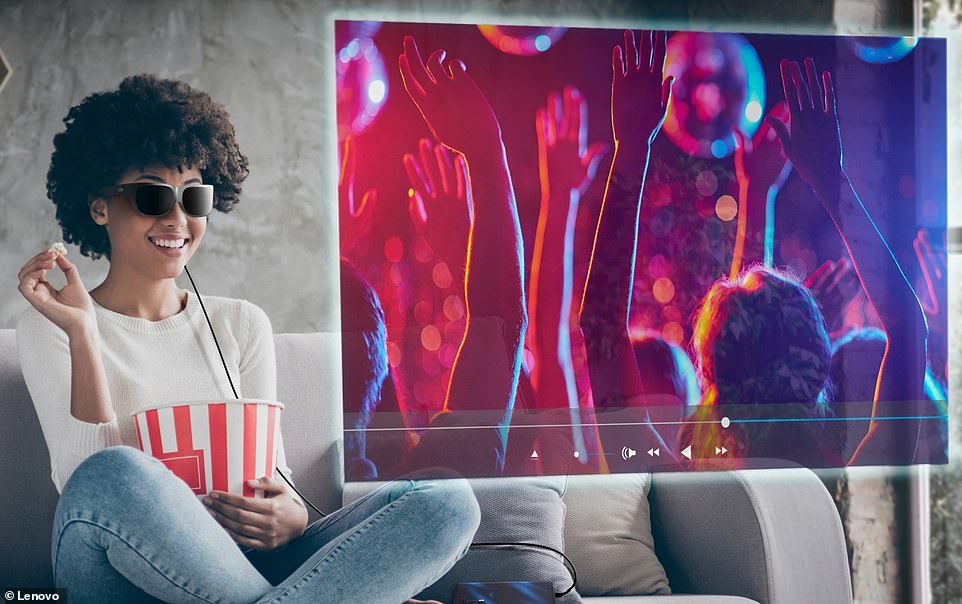 HMD Global, the maker of Nokia devices, has revealed four new devices and an environmentally-friendly subscription service at IFA 2022 in Berlin.

Called Circular, the subscription service incentivises people to keep their phones and tablets for longer by offering them eco-friendly-based rewards.

This way, Circular will reduce e-waste and in turn minimise the negative impact phone ownership can have on the planet, HMD Global said. 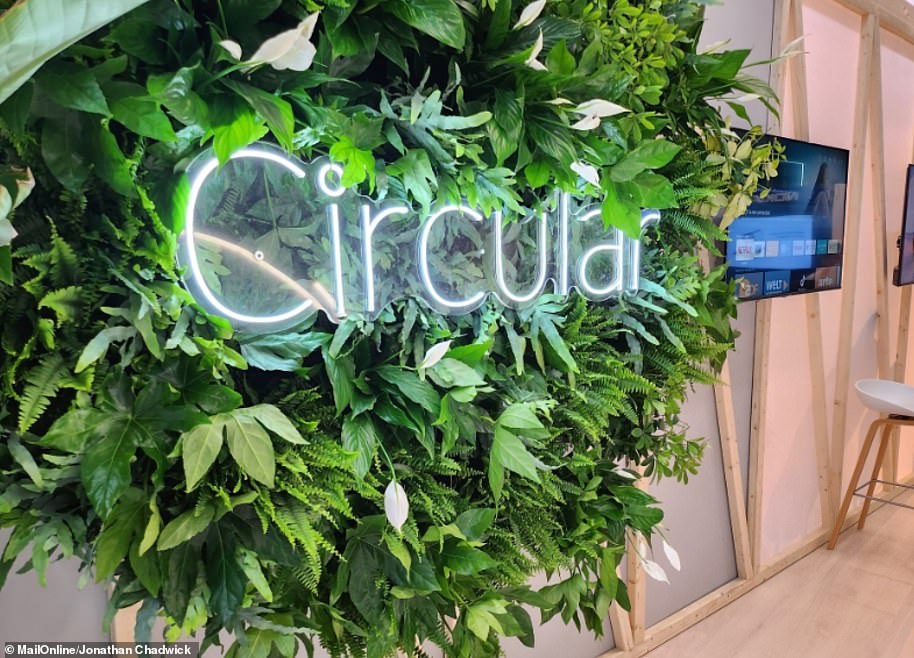 Pictured is the Nokia booth at IFA 2022, which runs in Berlin, Germany from September 2-6

The subscription service includes a £30 set-up fee, with phones and tablets then available for a range of prices starting at £10 a month.