C&C Group has admitted that demand from hospitality venues has slackened in recent months amidst rising cost pressures on consumer spending.

The Dublin-based drinks manufacturer, which produces the Magners and Bulmers cider brands, said trading had been ‘robust’ at the start of the current financial year before seeing a slowdown in on-trade momentum in the second quarter.

However, it still anticipates reporting net revenues of around €900million for the six months to the end of August, a 35 per cent annual increase and a slight rise on pre-pandemic volumes.

Cheers: C&C Group, which produces the Magners and Bulmers cider brands, said trading had been ‘robust’ at the start of the current financial year

For the same period, the firm is set to report operating profits will more than triple from €16million last year to between €52million and €55million this time around.

It also forecasts reaching its net debt to adjusted underlying earnings ratio target of approximately 1.5 times because of the £55million sale of its stake in pub chain Admiral Taverns and healthy cash generation.

C&C Group’s sales have recovered strongly as consumers have returned in droves to pubs, bars and restaurants in the British Isles following the loosening of Covid-related restrictions.

On-trade net revenues in Great Britain shot up to €1.21billion last year, buoyed by volume growth among its branded products, such as Magners and Tennent’s Lager. 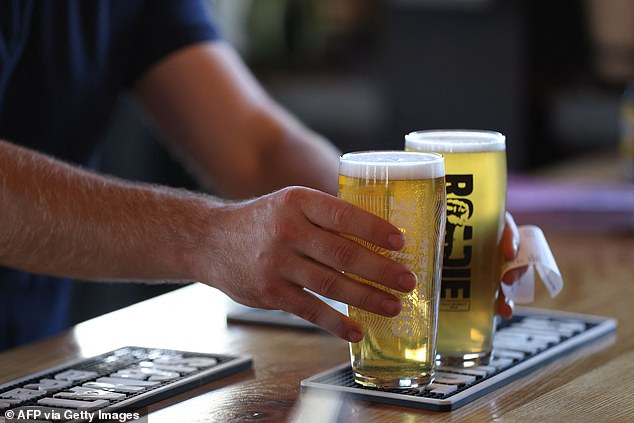 But C&C’s chief executive David Forde warned that the firm was ‘operating in an evolving and challenging inflationary cost environment’ and would have to raise prices in response to surging costs.

‘Despite the current positive sentiment in the hospitality sector post reopening, we are mindful of the pressures being faced by consumers and its potential impact on future demand,’ he added.

C&C Group shares closed trading 8.1 per cent lower at 159.8p on Wednesday, making it the second-biggest faller on the FTSE 350 Index behind Ocado. Since the start of the current, their value has declined by a quarter.

Today’s trading update comes a week after new Prime Minister Liz Truss announced households would have their annual energy bills frozen at £2,500 for two years, while businesses will get their prices capped for six months.

Leaders from the hospitality sector welcomed the latter measure, though they said more help was necessary to prevent more venues from closing.

‘We need clarity and assurance for the long term so our brewers and pubs can plan effectively and thrive at their heart of their communities long into the future,’ said Emma McClarkin, chief executive of the British Beer and Pub Association.

‘The cost of doing business is still a very real threat for many, but we are encouraged by the direction this Government is going in. Now we need to hear more on business rates, VAT and keeping beer duty low.’