Magician Richard Jones says the best financial year of his life was 2016, when he won ITV’s Britain’s Got Talent competition.

He told Donna Ferguson he used the £250,000 prize to buy his home outright, which meant he did not panic when work disappeared overnight once the pandemic struck in 2020.

The 31-year-old former Household Cavalry bandsman, who lives in Essex with girlfriend Ria, 30, recently became an ambassador for Spread a Smile, a charity which provides entertainment for sick children in hospital. He goes on tour in September. For more information, visit RichardJonesmagic.co.uk

That’s magic: Richard Jones says the best financial year of his life was 2016, when he won ITV’s Britain’s Got Talent competition

I was taught to always spend less than you earn, and save as much as possible. My dad was a policeman and mum was a childminder when my brother and sister and I were growing up. Money wasn’t tight. We were comfortable because my parents worked really hard.

Luckily, I haven’t. I did have a terrifying moment though when Covid struck in 2020. I was just about to start the biggest UK tour I’d ever done as a magician when everything got cancelled. Overnight, all the dates on my tour disappeared and so did all my corporate bookings and weddings I was booked to appear at.

At the time I had a lot of savings, so I didn’t panic. I bought my home outright for £295,000 when I won Britain’s Got Talent in 2016, so I didn’t have a mortgage. That was a big comfort to me during the pandemic and I felt lucky and grateful I was in that situation.

But as time went on, I started to worry quite a lot. I didn’t like living off my savings. So, about six months in, I started putting on virtual shows and my regular corporate clients started booking me to appear at their online conferences and events. Now I look back and think – the online world saved me.

Yes. I’m extremely fortunate that I do high profile events around the world – on private yachts in the Middle East, for example. The most I was ever paid was for a show in the Ritz Carlton in Saudi Arabia in 2019. I earned a substantial five-figure sum for a performance – I’d rather not say how much, but it worked out at roughly £1,000 a minute.

It was 2016, the year I won Britain’s Got Talent. It was a mind-blowing experience. As well as winning £250,000, tax-free, I started getting bookings to do corporate shows. It was obviously a really good year.

In 2018, I purchased a very flashy Lexus F Sport car for just over £40,000. It wasn’t something I really wanted. It was a car I thought people would expect me to drive, rather than a car I enjoyed driving. So earlier this year, I sold it and got a Mercedes campervan, which is much more fun.

Not keeping an eye on the money I was spending the year after I won Britain’s Got Talent. I was eating out pretty much every night. I was also regularly going in and out of London for events in Addison Lee taxis. I live in Essex, so each journey probably cost between £100 and £150.

Nowadays, I usually get the train. And I enjoy it. I take a book and read.

The craziest thing you spent money on at that time?

New shirts. After I won Britain’s Got Talent, I lived in a hotel near London Bridge for six weeks. I was busy going to and from interviews, events and TV appearances, and I didn’t have a washing machine. So I would go to the closest shop which sold white shirts for more than £100 each. Every time I needed a fresh shirt, I would buy one instead of washing the ones I already had.

I look back now and think: what a waste of money.

Investing 70 per cent of my savings in shares and investment funds in November 2020.

As I had more time on my hands during the pandemic than usual, I researched how the stock market works. If it hadn’t been for Covid, I probably never would have tried to understand the world of investing. But I got really interested and read books about it.

I’ve invested the majority of my money in the S&P500 Index, the 500 largest companies listed on the stock market of the United States. I’ve also invested in companies such as Apple and Tesla. I think I’ve done fairly well. Overall, I’ve seen my savings increase by around 18 per cent, although they’ve taken a hit in recent months. I see my holdings as long-term investments – and I’ll probably leave my money invested for at least ten years. 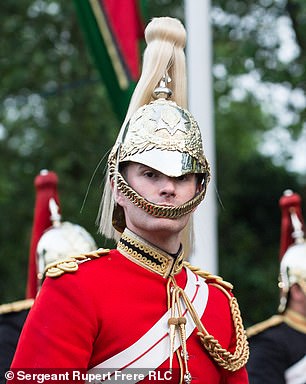 Career change: Richard Jones when he was in the Household Cavalry

No. That’s not something I’ve had time to look into. But it’s something I’m planning to do soon.

Yes, my home in Essex. It’s a three-bedroom house close to my mum and dad’s. I bought it with my winnings from Britain’s Got Talent and some money I had saved from my Army career. I had previously earned just under £30,000 a year as a Lance Corporal.

What is the one little luxury you treat yourself to?

Coffee. On a day when I’m performing in a show, I’ll probably have five or six cups. I’m a big cappuccino lover. Each time I buy one, it costs around £4.

If you were Chancellor what would you do first?

Yes I do, but I mainly give my time. I do hospital visits regularly on behalf of the charity Spread a Smile. It uses entertainers such as myself to go into hospitals to get seriously ill children to smile.

I also work with Rainbow Trust which provides emotional and practical support to families who have a child with a life-threatening or terminal illness. I’m also an ambassador for the Royal British Legion and a children’s hospice charity called Together for Short Lives.

Plus, I work closely with Scotty’s Little Soldiers, a children’s charity which supports the families of servicemen and women who lost their lives on duty.

For these charities, I’ll do magic for amazing kids. When I go into hospitals, I always leave feeling great. Sometimes, I’ll teach a kid a couple of tricks. It’s so rewarding the next time I visit – when the nurses tell me how that child has loved doing the magic tricks I taught them.

I probably save 70 per cent of everything I earn. My plan is to keep doing that for at least the next 10 years. One day, I’d like to retire and not have to worry too much about money.