By Geraint Llewellyn For Mailonline

Maggie Gyllenhaal cut a casual figure on Monday as she touched down in Athens ahead of the Greek premiere of her Oscar-nominated movie The Lost Daughter.

The actress, 44, who directed the drama, was joined by her husband Peter Sarsgaard, 51, as they made their way through the arrivals lounge after their long flight.

Maggie, who shares daughters Romana, 16, and Gloria, 10, with Peter, opted for an all black ensemble with a simple T-shirt tucked into wide legged trousers.

Arrivals: Maggie Gyllenhaal, 44, cut a casual figure in all black ensemble as she touched down in Athens with husband Peter Sarsgaard, 51, on Monday

The Secretary actress shielded her eyes behind sunglasses as she wore a protective black face mask.

Maggie, who is the older sister of fellow actor Jake Gyllenhaal, 41, showed off her newly chopped locks as they were styled into a chic pixie cut.

Slipping her feet into trainers, the star accessorised with a selection of gold bangles as she carried her belongings in a cross body bag.

The Batman actor Peter, who also stars in his wife’s movie, looked comfy in a navy T-shirt and a pair of acid wash jeans. 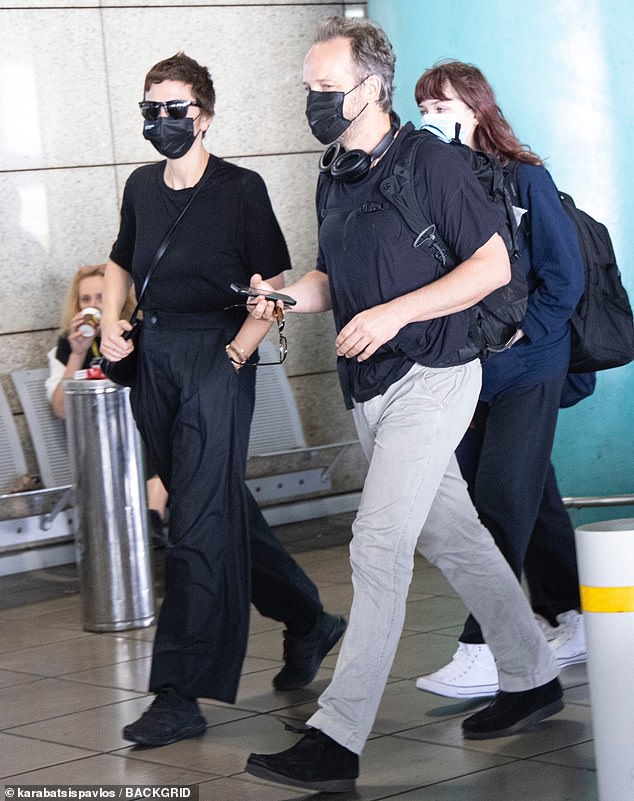 Couple: The Batman actor Peter looked comfy in a navy T-shirt and a pair of acid wash jeans, as he too played it safe with a face mask

The star carried a rucksack on his back as cordless earphones sat around his neck.

The Lost Daughter follows a woman named Leda Caruso, played by Olivia Colman, who finds herself becoming obsessed with a younger woman Nina (Dakota Johnson)  and her daughter while on a summer holiday prompting memories of her own experience of early motherhood.

Olivia joked last year that she had certain scenes with co-star Paul Mescal deliberately inserted into the movie just so she could flirt with him.

The actress, 47, claimed that after seeing Mescal, 26, in BBC TV series Normal People she created a scene so she could spend time with him on screen.

When asked if she enjoyed working with him, she told The Sun: ‘That’s always fun, but that wasn’t even in the script. I just did that.’

Olivia then backtracked on what she had said, clarifying that the scene was indeed in the script from the beginning, before going on to heap praise on her fellow actor.

She added: ‘It was in the script, it was. I was a huge fan from watching Normal People and I was a bit giddy [when I met him].’

The Oscar-winning actress then went on to explain that while she ‘couldn’t look him in the eyes’ to begin with, she thinks Mescal’s work as an actor and singer is ‘beautiful’.

She said: ‘I couldn’t look him in the eyes when we first met. He’s just so kind and nice and a good person. And he sings beautifully. He’s just lovely.

‘He’s the nicest and loveliest. He loves his family and he’s so brilliant in what he does. His work is beautiful.’ 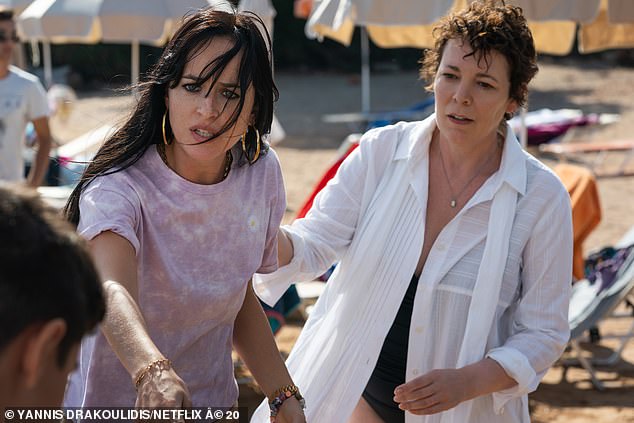 The Lost Daughter: The film follows a woman named Leda Caruso, played by Olivia Colman, who finds herself becoming obsessed with a younger woman and her daughter