Madison Square Garden Entertainment has banned a New York City law firm and its 60 lawyers from attending Knicks and Rangers games, as well as concerts and other shows, until a lawsuit filed by ticket sellers against the company is resolved.

Larry Hutcher, 71, co-founder and one of three partners at the law firm Davidoff Hutcher & Citron LLP, has been a Knicks season ticket holder since the 1975-76 season and usually sits five rows behind one of the court’s two baskets.

He and 59 other lawyers working at his firm have been barred from several venues across the Big Apple that are under Madison Square Garden Entertainment and Madison Square Garden Sports’ umbrella, including: Hulu Theater, Beacon Theatre, Radio City Music Hall. They are also prohibited from attending shows at the Chicago Theatre in Illinois.

Larry Hutcher, co-founder, and one of three partners at NYC-based law firm Davidoff Hutcher & Citron LLP, has been banned from Madison Square Garden along with his 59 employees for representing season-ticket holders involved in a lawsuit with MSG Entertainment. He has been a Knicks season ticket holder since the 1975-76 season 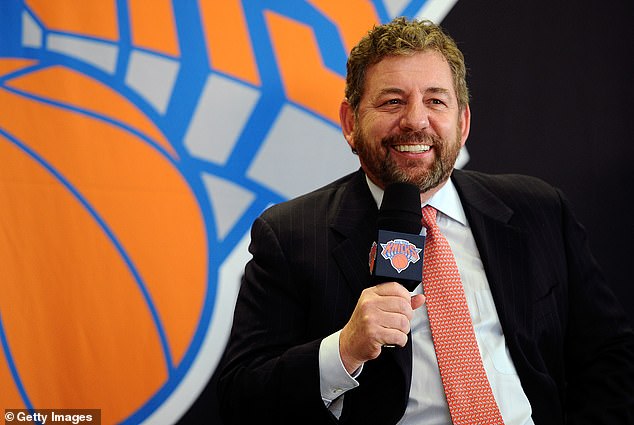 The reason for the ban is tied to Hutcher and the attorneys at his firm representing 24 ticket resellers in a lawsuit against MSG Entertainment. Their season tickets to watch the Rangers and the Knicks at ‘The Mecca’ have been withdrawn due to their status as sellers, which stadium and company owner James Dolan argues is against the New York Arts and Cultural Affairs Law in the lawsuit.

‘I had people that had tickets for Eric Clapton and concerts at the Beacon; they couldn’t use them,’ Hutcher told The New York Times. ‘They are angry at me. They go, ”What did we do?”’

Just days after the lawsuit was filed, Hutcher was the recipient of a letter from the senior vice president for legal and business affairs at MSG Entertainment, Hal Weidenfeld.

It revealed that, like other lawyers embroiled in legal matters against the company, every associate at Hutcher’s firm is prohibited from entering all of the organization’s sites until the lawsuit is resolved.

Weidenfeld also referred to the New York State Bar Association rule barring Hutcher and any of the firm’s employees with awareness of the lawsuit from speaking to any Madison Square Garden employees about ongoing legal proceedings.

Hutcher, who had begun to wonder why he couldn’t have access to his Ticketmaster account two days before he received the letter, had bought his 47th year of season tickets earlier this year in March.

The die-hard Knicks fan was even gifted a team jersey six years ago with the No. 40 on it, as a symbol of his 40th year as a season-ticket holder. He also owns a picture of Knicks forward Bernard King with his autograph on it and was singled out in a game last October by the Knicks organization for his loyalty to the franchise. 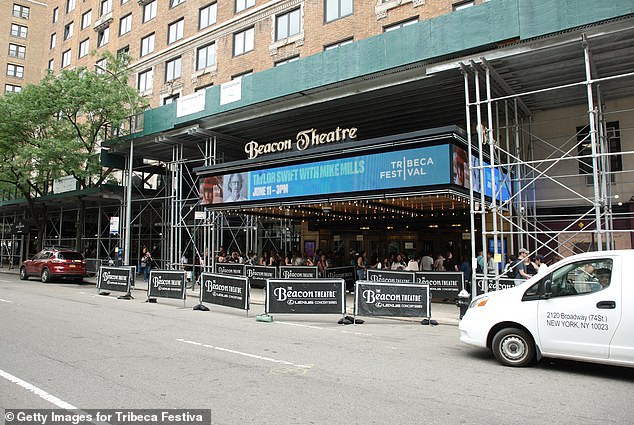 Hutcher crafted a response of his own to the letter initially sent to him, framing why he thought the ban was illicit and unfitting considering his background as a loyal Knicks fan despite the team’s high and lows (mostly lows) throughout the last 50 years.

‘In one brief moment I went from being the Season Ticket Member of the Game on October 24, 2021, to a pariah,’ read a line from the letter obtained by the New York Times.

Soon after, Hutcher received another notice from one of the lawyers representing MSG Entertainment, Rany Mastro, who revealed to the 71-year-old that his tickets had become invalid over time and that ‘M.S.G. decided not to renew them and returned your deposit, as is M.S.G’s right under New York Law,’ the New York Times reported.

‘To be clear, this is a uniform policy being implemented across the board without exception,’ Mastro added. ‘In other words, you are not being singled out or treated any differently than any other lawyer or law firm currently suing M.S.G.’

Hutcher and his firm are now taking legal action against MSG Entertainment, as they claim that the company has been ‘misguided’ and ‘erroneous’ in its interpretation of the bar association rules of New York’s Civil Rights Law. They are also stating a clear violation of the piece of legislation.

‘In June, MSG instituted a broad policy that precludes attorneys from firms engaged in litigation against the company from attending events at our Venues until that litigation has been resolved,’ Nathalie Ravitz, Senior Vice President of Communications and Marketing at MSG, told DailyMail.com.

‘While we understand this is disappointing to some individuals, MSG has both a right and obligation to protect itself during litigation procedures. We cannot ignore the fact that litigation creates an inherently adversarial environment, and an ancillary consequence of that is our need to protect against improper disclosure and discovery.

‘When the firm of Davidoff Hutcher & Citron filed a lawsuit against us in September, their attorneys fell under that policy. Pursuant to that policy, a refund was issued to Mr. Hutcher. This is a straightforward policy we have implemented to protect ourselves during litigation,’ she concluded. 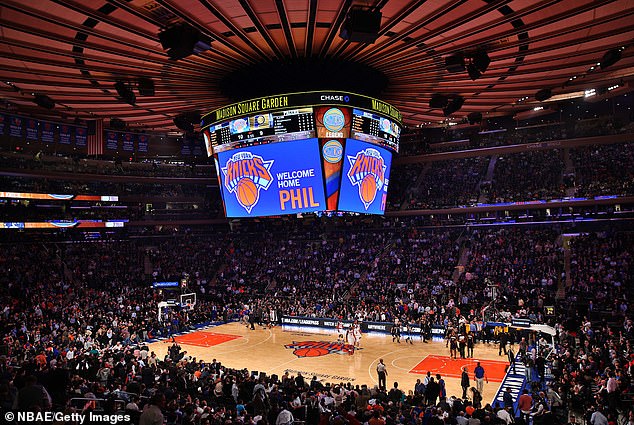 Hutcher is now facing a race against time to obtain season tickets for the Knicks’ regular-season home opener against the Detroit Pistons on October 21, as the NBA’s new season unravels.

‘The odds of an individual plaintiff discussing the subject of the litigation with that M.S.G. employee are astronomical,’ reads the lawsuit filed against MSG Entertainment.

‘There are better odds of being struck by lightning or the Knicks winning the N.B.A. championship this year.’

Dolan once drew intense criticism for ejecting a Knicks fan at Madison Square Garden in 2019 after the man told him to sell the team. In an interview on radio afterwards, the Knicks owner doubled down on that decision by announcing that the fan had been banned from MSG for life.

Another low point came during the 2016-17 season when retired Knicks star Charles Oakley was ejected from MSG and accused of being an alcoholic by Dolan, who has admittedly confessed to being one as well, and has gone through rehab himself.

Television cameras showed Oakley shoving security guards a short distance from the Knicks bench, and MSG would ultimately release witness statements from a dozen employees who encountered Oakley that night, alleging that he was physically and verbally abusive. One Garden employee alleged Oakley shouted, ‘All of you suck Dolan’s d***!’

Dolan responded to the ejection by banning Oakley from The Garden indefinitely and in an interview with ESPN radio suggested that Oakley ‘may have a problem with alcohol.’ 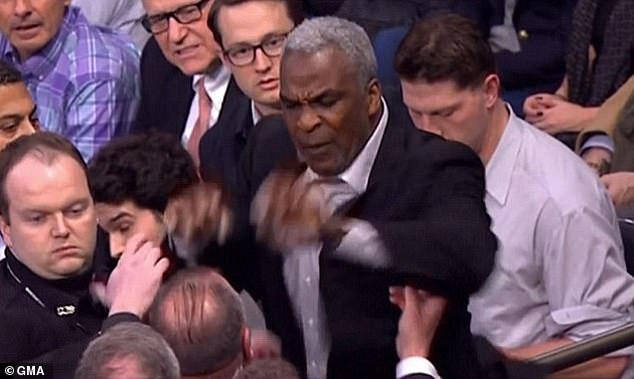 Former Knicks power forward Charles Oakley (pictured) was arrested at Madison Square Garden in 2017 for allegedly trespassing and for allegedly being verbally abusive towards stadium staff and Dolan, with whom he has an acrimonious relationship with 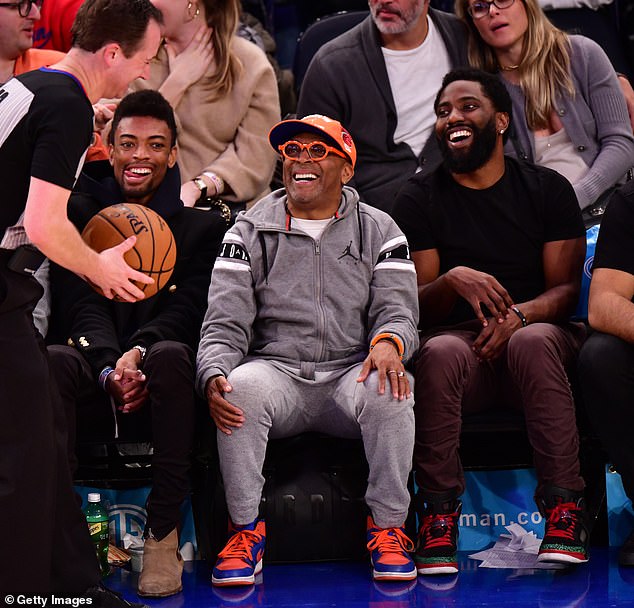 Spike Lee is another high-profile figure who’s had a few bump-ins with Dolan after security staff obliged him to go through another arena entrance rather than the usual one he walks in. Lee, who is a regular at Knicks games, has since resolved his beef with the franchise owner

‘It is very clear to us that Charles Oakley came to the Garden with an agenda, with a mission in mind,’ Dolan said. ‘From the moment he stepped into The Garden, from the moment he walked through the doors, he began with this behavior, abusive behavior, disrespectful behavior, stuff you don’t want to say on the radio.’

Oakley’s problems with Dolan and the Knicks began several years earlier, according to Oakley, around the time he publicly criticized the team for signing Amar’e Stoudemire to a five-year, $99.7million contract in 2010.

The feud was ultimately made public, and while Oakley claimed he tried to make peace, he and Dolan’s relationship never seemed to improve.

‘Everybody in New York liked me except this one guy. Why is this?’ Oakley told the New York Daily News in 2015. ‘Everywhere I talk to people — ‘Why aren’t you working with the Knicks?’ I said I try to. They said, ‘What, is it Dolan?’ I talked to maybe a million people. He’s a bad guy.’

Oakley responded to the 2017 incident by suing Dolan and MSG for defamation but lost after a Manhattan judge ruled that the former power forward was not excessively forced out of the Garden.

Dolan also had beef with actor and New Yorker Spike Lee, who boycotted the Garden after an incident with arena security. He has since returned to ‘The Mecca’, where he is a regular at Knicks games.