Madison Beer felt suicidal when she was dropped by her record label at the age of just 16.

The musician, 23, shot to fame in her early teens when her YouTube covers attracted the attention of Justin Bieber back in 2012, before signing with Island Records.

The singer was released by her label just a few years later, leaving her feeling like an ’embarrassed failure’ and in ‘such a dark place’ for a three-year period.

Speaking on the Reign with Josh Smith podcast, Madison explained: ‘To be totally transparent… I was so suicidal. Every single inconvenience in my life, my first thought was suicide, truly.

Honest: Madison Beer has told how she felt suicidal when she was dropped by her record label at the age of just 16 (pictured last week)

‘I was at such a dark place in my life that I was so hopeless. I felt such a failure. I felt embarrassed. I felt like no one liked me. There were so many components, I truly just wanted out.

‘From getting dropped at 16 and getting signed at 12 and mourning the loss of those primitive years and so many other things that happened behind the scenes caught up with me. And that’s when I was feeling these ways of I don’t wanna be here anymore.’

Madison admitted she had ‘so many layers of self-hatred that came out’, leaving her feeling ‘deeply insecure’ – while revealing she is still working through ‘a decent amount of PTSD (post traumatic stress disorder) and trauma. 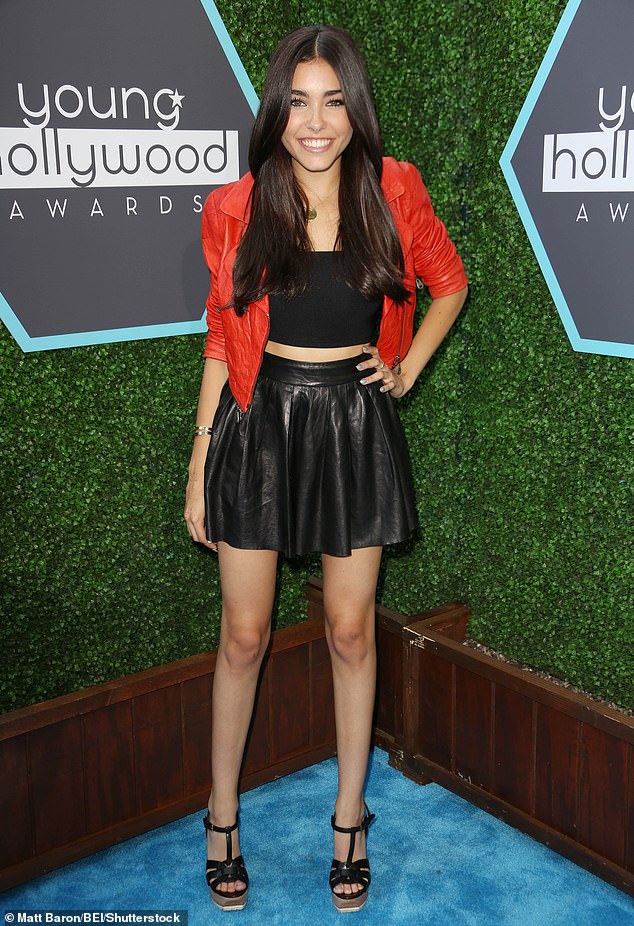 Teen sensation: The musician, 23, shot to fame in her early teens when her YouTube covers attracted the attention of Justin Bieber back in 2012 (pictured in 2014)

‘And of course obviously I chose that path, which I’m so grateful for and I had amazing help in those years and during those times but I think that I really just started to look at things and have a lot of empathy for myself.

‘I couldn’t understand why my label dropped me and why people who promised to be in my life forever, never spoke to me again. It was really difficult and that manifested itself in a lot of anger which then led me to hating myself. 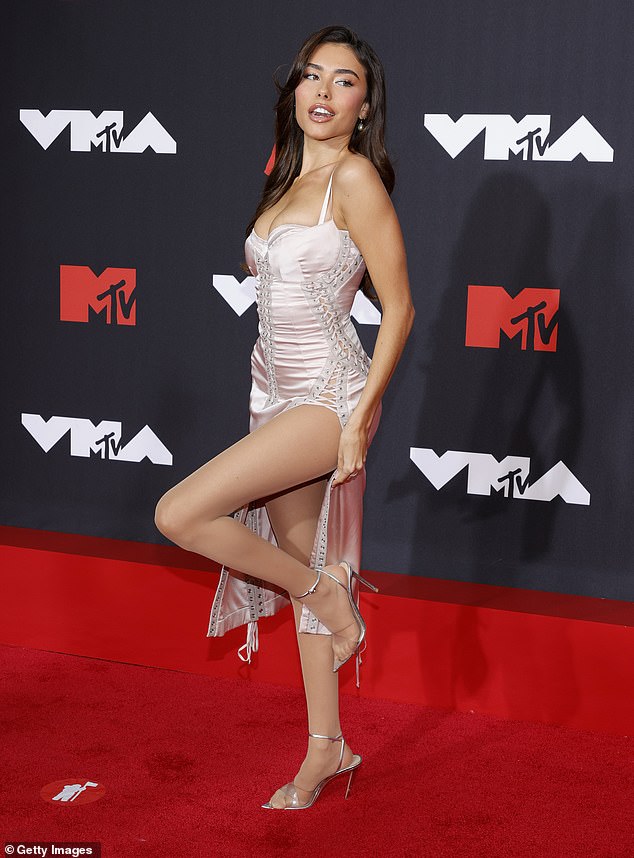 Moving on: The singer was released just a few years later, leaving her feeling like an ’embarrassed failure’ and in ‘such a dark place’ for a three-year period (pictured in 2021)

‘It led me to starving myself. There were so many layers of just self-hatred that came out, I was so deeply insecure and it’s so crazy cause I’m so different now and I’m so grateful.

‘But it was a choice and it’s also not a linear choice. Nothing in the healing world is and I think that it’s still a journey that I’m on to this day.

‘I obviously still have my dark moments, my dark days, my episodes, whatever it is. I do have a decent amount of PTSD and trauma that I’m still working through.’

Madison also pushed back on being labelled a ‘diva’ in the tell-all Reign podcast, insisting she is ‘just trying to pursue my dreams the way they deserve to be pursued’.

She said: ‘I had a really eye-opening conversation with someone recently where this person had been telling me for years that I was difficult. I think they now realise I was trying to stand up for myself creatively.

‘Now it’s changing a bit where they’re like, “All those times that I thought you were just being difficult to be difficult, I realise it was you just trying to drive home what you believe in”. 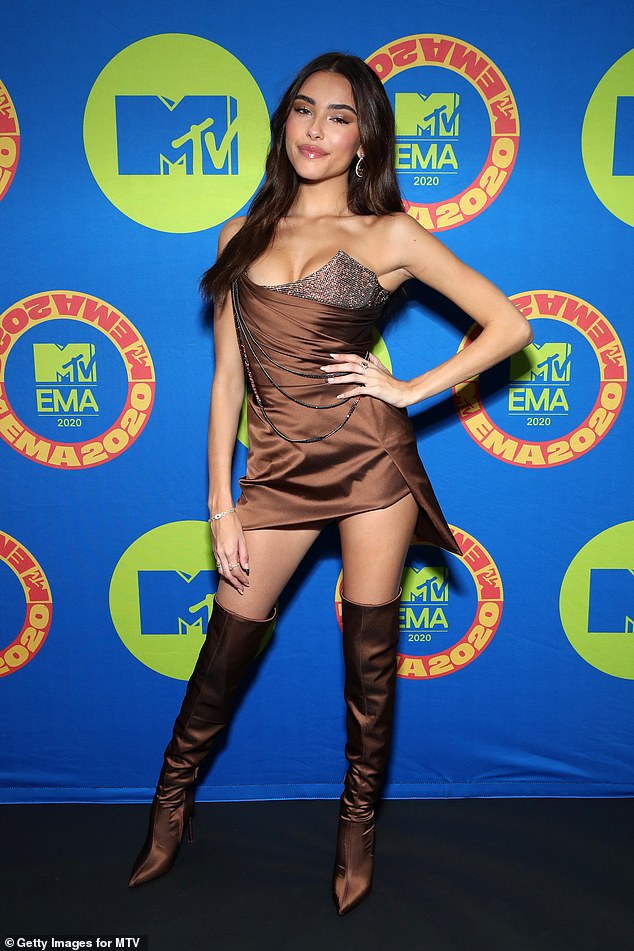 A tough time: Madison admitted she had ‘so many layers of self-hatred that came out’, leaving her feeling ‘deeply insecure’ (pictured in 2020)

‘Which means a lot and that is always what it’s been and that’s always what it will be. So, if I come across as a diva or difficult for just trying to pursue my dreams the way that I think they deserve to be pursued, I am okay with that.’

Madison spoke to Josh about her experience with social media since bursting onto the scene when she was just 12, admitting she has now ‘developed a really beautiful relationship with myself’ after receiving ‘consistent hate’ online.

She told Josh: ‘My internal criticism I don’t think is as harsh as it used to be. I think I’m a lot easier on myself, I’ve developed a really beautiful relationship with myself that I feel really lucky to have.

‘I’ve been on the internet now for over 10 years and I’ve gotten hate consistently since I joined it when I was 12.

‘So I think that I had to make a decision at one point, am I gonna leave social media entirely and stop participating because it’s not good for me? Or am I gonna change the way that I manoeuvre it?

‘I’ve had to really set boundaries that are looking out for my own wellbeing, and I think for a long time I was putting others wellbeing over myself, my fans for example, I would be like, “Oh, I have to go on Twitter and I have to talk to everyone because they want me to.”‘

Madison added: ‘I think for me, setting those boundaries of hey, not now. And that’s OK. And I’m allowed to shut off and not be present on social media.

‘I think that’s done wonders for me and really I have to say I’m really, really lucky to also have a fan base and friends online who understand and who are empathetic towards that.’

Listen to the full interview with Madison Beer on Reign with Josh Smith now. 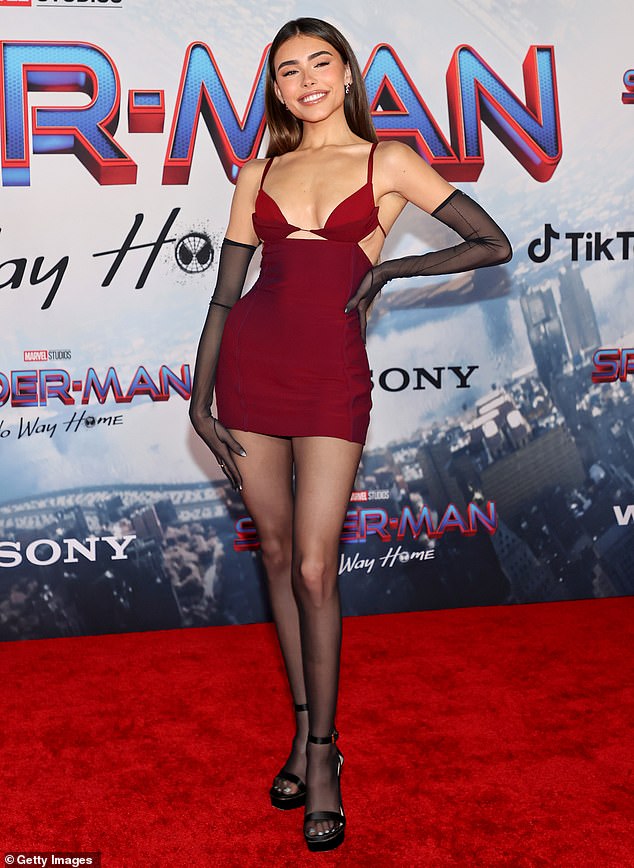 No diva here: Madison also pushed back on being labelled a ‘diva’ in the tell-all Reign podcast, insisting she is ‘just trying to pursue my dreams’ (pictured in 2021)