A nanny who looked after Madeleine McCann in the holiday resort before she disappeared recognised a photo of Christian Brueckner when she was shown it by Portuguese police.

She was handed the photo and told his name just five days after the child disappeared.

The nanny told the Daily Mirror: ‘I was shown identikits the day after they took my statement (about her time with Madeleine).

‘I recognised a few people from just being about… one guy I recognised was a known paedophile who later committed suicide.

‘I am aware of his (Brueckner’s) name and face from photos I was shown but I don’t think I remember having seen him in real life. I’m aware police knew of guys like this in Praia da Luz at the time.’

It comes as numerous witness statements given to police investigating Madeleine’s disappearance appear to describe a man who looked similar to prime suspect Christian Brueckner.

When shown a picture of the paedophile, one British woman who was quizzed at the time of the abduction, told The Sun: ‘That’s the man I saw.’ 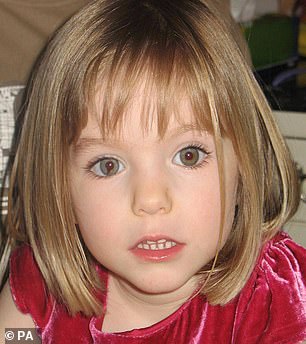 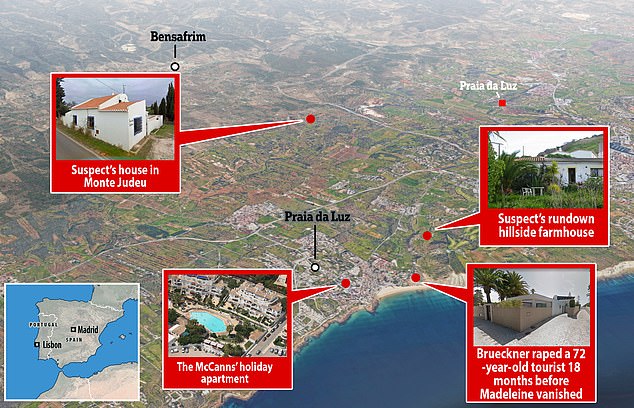 Police interviews in 2007 and 2008 show that witnesses saw a man acting strangely near the apartment where Maddie was staying with her family.

Witnesses say they saw a tall blond man in a camper van near the holiday home several times before she disappeared.

Old statements also describe a tall slim white man ‘staring’ at the apartment block days before the abduction, according to The Sun.

Tasmin Sillence, who was a 12 at the time, told Portuguese police she saw a white man looking at the holiday complex.

She also says that she saw a young girl in the same block of apartments.

She says that she saw the man at the back of the apartment on April 30 and that he was ‘staring at the balcony’. She then saw him again in the same place on May 2.

Tasmin – who is British and is still believed to live in the area – described the man as light-skinned, and around 5ft 9 ins tall, clean-shaven with short, possibly blond hair. 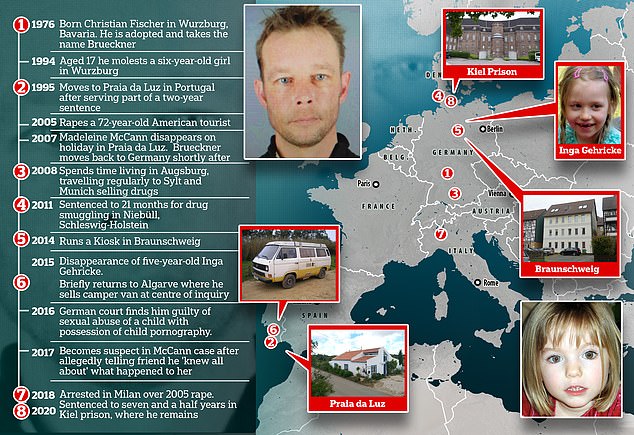 Another witness, Carole Tranmer, 72, also gave police a description in 2008 which appeared to match that of Brueckner.

She says she saw a man leaving a garden at the Ocean Club resort just hours before Maddie went missing.

She described the man as having short blond hair, wearing a blue t-shirt and being Scandinavian looking.

This comes as a family of a six-year-old boy who went missing in the Algarve 24 years ago revealed they have been contacted by police in the wake of the Madeleine McCann developments.

René Hasse’s father Andreas Hasee told his local newspaper that an investigator from the Federal Criminal Police Office (BKA) phoned him yesterday, for the first time in 20 years.

The six-year-old from Elsdorf, Germany, was on holiday with his family in Aljezur – just 25 miles from Praia da Luz, in the Algarve – when he vanished on June 21, 1996.

The prime suspect in the disappearance of Madeleine, Christian Brueckner, now 43, moved from Germany to Praia da Luz in 1995 at the age of 18. He was already convicted of sex offences against children and would have been 19 at the time René disappeared.

The schoolboy went missing after running towards the sea and his family and the authorities had previously accepted René drowned in a tragic accident.

He had been running ahead of his mother and step-father during a walk on the beach. After losing sight of him, they never saw him again, with just his clothes left lying on the beach.

Andreas Hasee, René’s father, revealed an investigator from the Federal Criminal Police Office (BKA) contacted him today – the first time he had heard from police in 20 years. He told German newspaper Kölner Stadt-Anzeiger: ‘There could be a connection.’

This also comes as MailOnline can reveal the paedophile suspected of abducting Madeleine carried out a brutal rape at a beach front villa less than a mile from where the three-year-old disappeared in 2007.

Brueckner broke into the secluded home two years before Maddie went missing from her family’s apartment in the resort of Praia da Luz.

A 72-year-old American woman was tortured and raped by Brueckner who filmed the savage attack. He was jailed last year for seven years by a German court after DNA evidence linked him to the assault.

The villa, called Casa Jacaranda, is just a ten-minute walk from the Ocean Village apartments where Maddie was sleeping in a ground floor apartment when she was snatched 13 years ago.

The dramatic development comes as it was reported paedophile Brueckner, 43, vowed on a web chat to ‘grab himself a little something and abuse it for days’.

He fantasised in an online chatroom in September 2013 about kidnapping and sexual abusing a child, according to German magazine Der Spiegel.

He allegedly added it would be safer ‘if the evidence is exterminated afterwards’. The German word he used, vernichten, is the same word the Nazis used for the final solution.

As police in Britain and Germany appeal for witnesses who could help convict prime suspect Christian Brueckner, it has also emerged today: 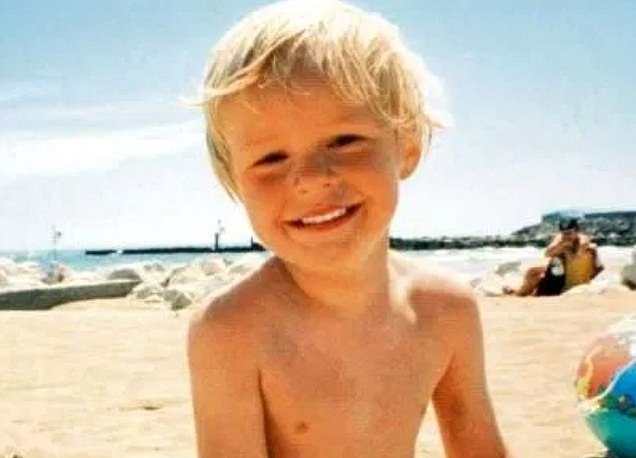 German detectives investigating Christian B, 43, have contacted the family of René Hasee to say they were looking into his 1996 abduction again 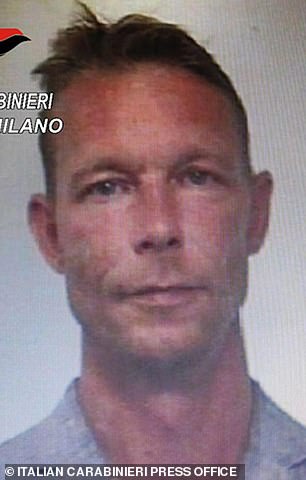 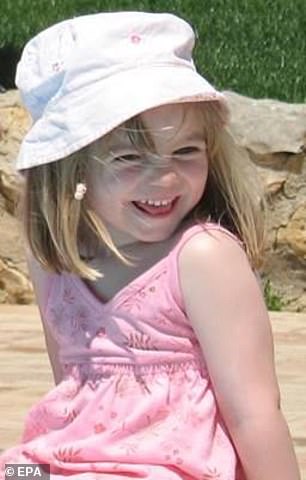 Detectives have said the suspect (left) was regularly living in the Algarve from 1995. He was already convicted of sex offences against children and would have been 19 at the time René disappeared. Madeleine McCann (right) disappeared during a family holiday in Praia da Luz in May 2007

The newspaper did not say whether the phonecall from the prosecutor had mentioned anything about Madeleine or paedophile Christian Brueckner. Last night neither the police nor prosecutor were able to shed any further light on the claims by Mr Hasse, of Colone.

Mr Hasee, who had accepted his son had drowned, added: ‘René went to Portugal with my ex-wife and her new partner.

‘He was actually also a very careful child, he would not have easily climbed into the Atlantic alone. Of course you start thinking, yes. I don’t imagine that René is still alive,’ he added.

An expert at the time found tide and current conditions in the sea made a swimming accident unlikely and BKA police officers in Germany have maintained other victims could be linked to the Maddie investigation. The force declined to comment on René Hasee.

It comes after prosecutors re-opened the investigation into whether Brueckner abducted five-year-old Inga Gehricke after she was grabbed from Diakoniewerk Wilhelmshof in Saxony-Anhalt during a family outing five years ago.

Her disappearance on May 2, 2015 – almost eight years to the day after Madeleine vanished in Portugal on May 3, 2007 – was only 48 miles away from where Brueckner lived on the five-acre site of a box factory in the isolated of village of Neuwegersleben, south-east of Hanover.