Luiz Inacio Lula da Silva was sworn in as Brazil’s president on Sunday, delivering a searing indictment of conservative former leader Jair Bolsonaro and vowing a drastic change of course to rescue a nation plagued with hunger, poverty, and racism.

In a speech to Congress after officially taking the reins of Latin America’s biggest country, Lula said democracy was the true winner of the October presidential vote when he ousted Bolsonaro in the most fraught election in a generation.

Bolsonaro, who left Brazil for the United States on Friday after refusing to concede defeat, rattled the cages of Brazil’s young democracy with baseless claims of electoral weaknesses that birthed a violent movement of election deniers.

‘Democracy was the great victor in this election, overcoming … the most violent threats to freedom to vote, and the most abject campaign of lies and hate plotted to manipulate and embarrass the electorate,’ Lula told lawmakers.

Lula da Silva, 77, took office as Brazil’s president for his third term. Luca is pictured on the left walking with a group representing diverse segments of society 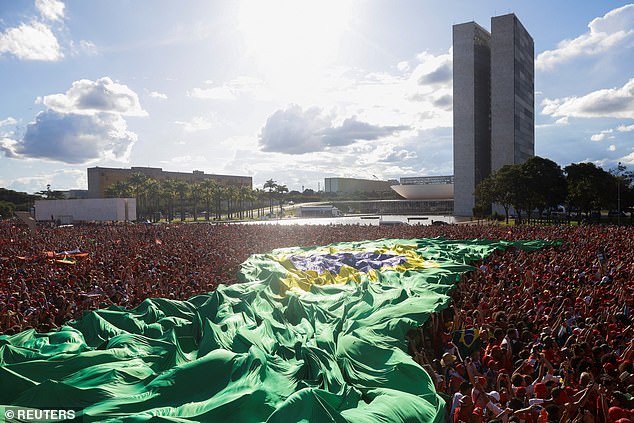 Lula previously served as president of Brazil from 2003 to 2011. His supporters gathered to watch him be sworn in on Sunday

Lula, who was behind bars during Bolsonaro’s 2019 inauguration on graft convictions that were later overturned, delivered a veiled threat to his predecessor.

Bolsonaro faces mounting legal risks for his anti-democratic rhetoric and his handling of the pandemic now that he no longer has presidential immunity.

The former president’s trip to Orlando, Florida, insulates him from any immediate legal jeopardy in Brazil. It is unclear exactly where he is staying in the Sunshine State.

‘We do not carry any spirit of revenge against those who tried to subjugate the nation to their personal and ideological designs, but we will guarantee the rule of law,’ Lula said, without mentioning his predecessor by name. ‘Those who erred will answer for their errors.’

He also accused Bolsonaro’s administration of committing ‘genocide’ by failing to respond properly to the COVID-19 virus that killed more than 680,000 Brazilians.

‘The responsibilities for this genocide must be investigated and must not go unpunished,’ he said.

Lula’s plans for government provided a stark contrast to Bolsonaro’s four years in office, which were characterized by backsliding on environmental protections in the Amazon rainforest, looser gun laws, and weaker protections for indigenous peoples and minorities.

Lula said he wants to turn Brazil, one of the world’s top food producers, into a green superpower.

He reinforced his commitment to ending deforestation in the Amazon, which surged to a 15-year high under Bolsonaro, and to revoking Bolsonaro’s looser gun policies, which prompted a sharp rise in gun ownership.

‘Brazil does not want more weapons, it wants peace and security for its people,’ he said. 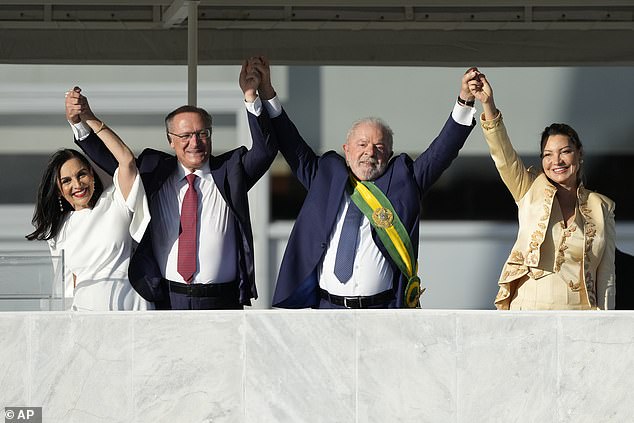 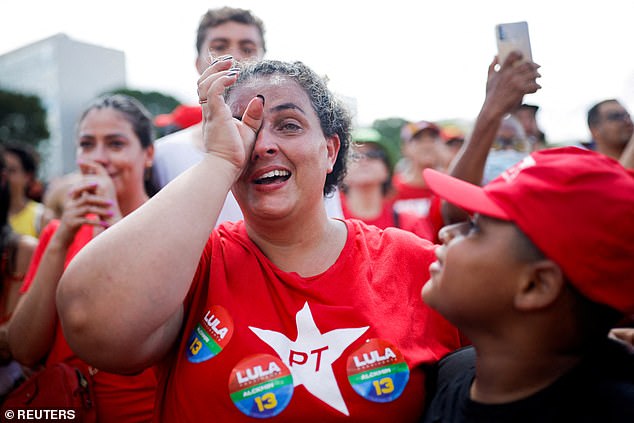 Spectators emotionally reacted to Lula being sworn in as president 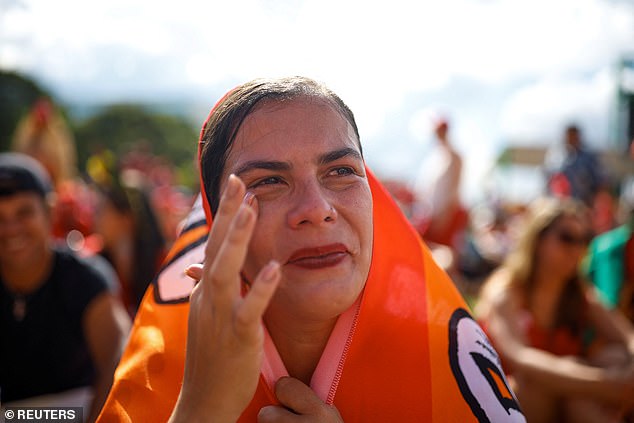 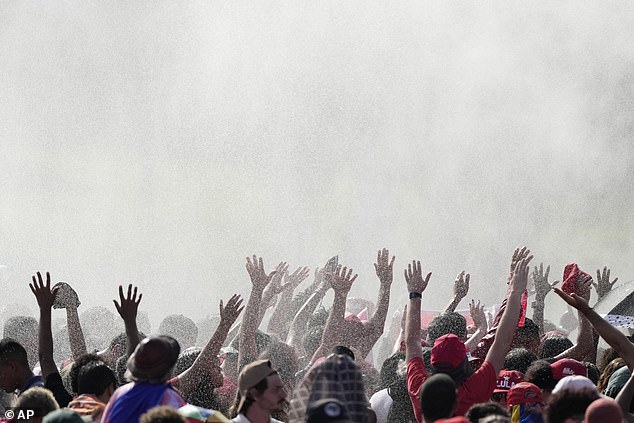 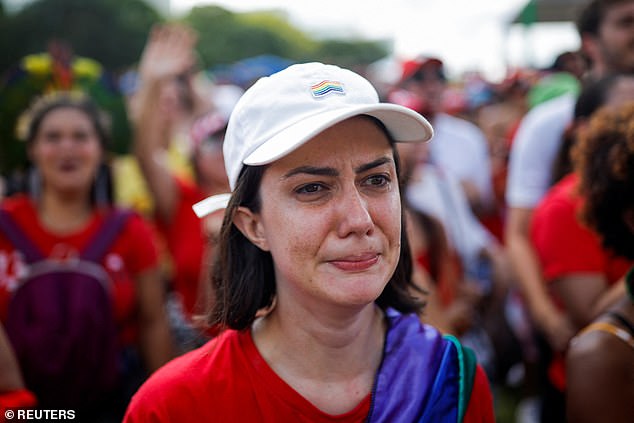 Another supporter was seen holding back her tears 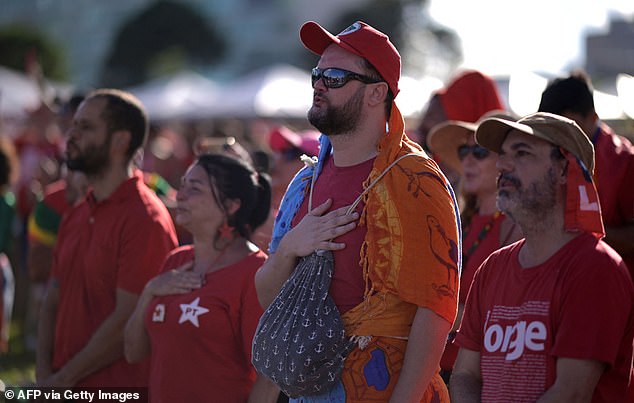 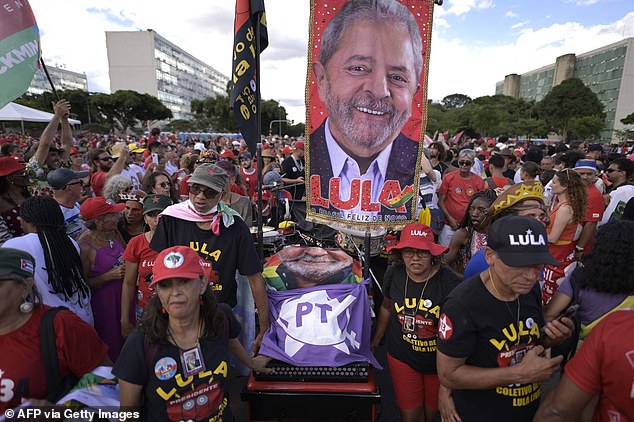 After the swearing-in, Lula drove in an open-top Rolls-Royce to the Planalto palace, where he walked up its ramp with his wife and a diverse group that included Chief Raoni Metuktire of the Kayapó tribe, a young black boy and a disabled man.

Lula was then handed the presidential sash – a hugely symbolic act in Brazil that Bolsonaro had repeatedly said he would never do – by Aline Sousa, a black garbage collector.

Tens of thousands who had gathered to celebrate on Brasilia’s esplanade cheered as Lula wiped away tears.

In a subsequent speech, he pledged to unite the polarized country and govern all Brazilians.

‘No one is interested in a country on a permanent war footing, or a family living in disharmony,’ Lula said. ‘There are not two Brazils. We are one country, one great nation.’

Lula said he would be fiscally prudent, but made clear his main focus would be on ending hunger and narrowing rampant inequality. He also said he aims to improve the rights of women and attack racism and Brazil’s legacy of slavery.

‘This will be the hallmark of our government,’ he said. 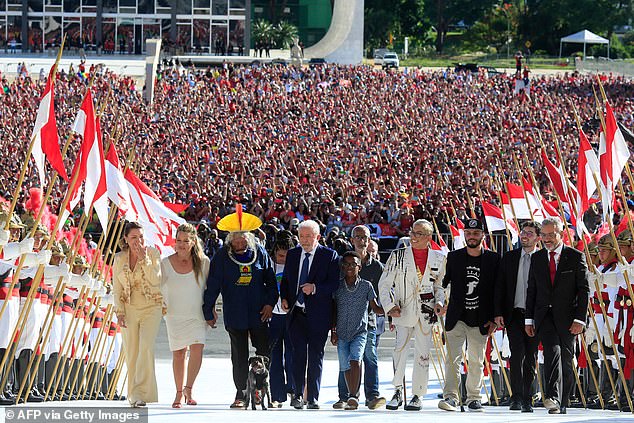 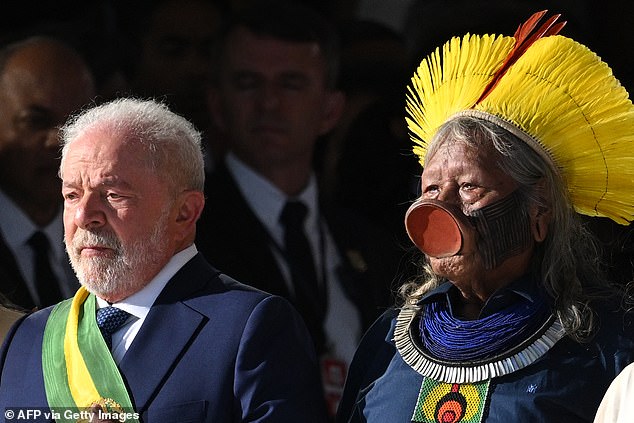 Lula was seen standing by Metukire known as Chief Raoni

Some of Bolsonaro’s supporters have claimed the election was stolen and called for a military coup to stop Lula from returning to office in a climate of vandalism and violence.

On Christmas Eve, a Bolsonaro supporter was arrested for making a bomb that was discovered on a truck laden with aviation fuel at the entrance to Brasilia airport and confessed he was seeking to sow chaos to provoke a military intervention.

Bolsonaro has seen his support among many former allies evaporate due to the anti-democratic protests.

On Saturday night, then-acting President Hamilton Mourao, who was Bolsonaro’s vice president, criticized his former boss for allowing anti-democratic sentiment to thrive after his defeat at the polls.

‘Leaders who were supposed to reassure and unite the nation … allowed silence or inopportune and deleterious protagonism to create an atmosphere of chaos and social disintegration,’ Mourao said. 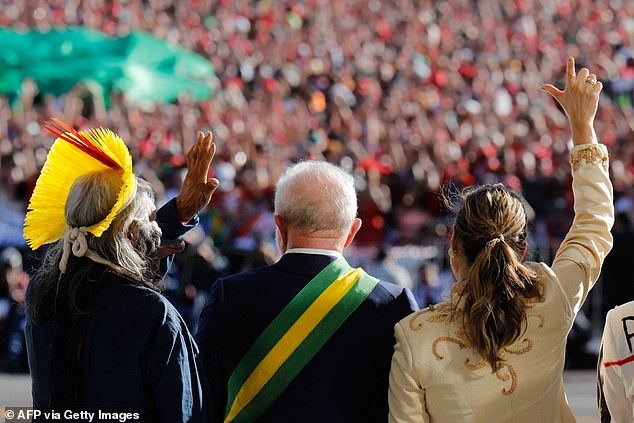 Lula’s election victory marked a stunning political comeback, winning an unprecedented third term after a hiatus that saw him spend a year and a half behind bars.

In his previous years as Workers Party (PT) president from 2003-2010, the former union leader lifted millions of Brazilians from poverty during a commodity boom that buoyed the economy.

Now, he faces the daunting challenge of improving Brazil’s stagnant economy while also uniting a country that has become painfully polarized under Bolsonaro.

‘A lot is expected of Lula. He’ll have the difficult mission to restore normality and predictability in Brazil, and above all to rapidly deliver results that improve the quality of life for its inhabitants,’ said Creomar de Souza, director of Dharma Political Risk consultancy in Brasilia.