By Brenda Dennehy For Mailonline and Sam Joseph Semon For Dailymail.com

Lucy Hale dressed comfortably as she enjoyed some downtime in Los Angeles on Thursday.

The 32-year-old Pretty Little Liars star showed off her toned legs in a pair of tiny high-waisted purple shorts as she enjoyed a low-key stroll.

The actress coupled her vibrant bottoms with a khaki string top and colourful sneakers as she soaked up the sunshine.

Relaxed: Lucy Hale, 32, showed off her toned legs in a pair of tiny high-waisted purple shorts as she enjoyed some downtime in Los Angeles on Thursday

The stunning singer added some chic beaded necklaces to the relaxed look as she strolled down the street with her phone in hand.

Her brunette hair was tied back in a low messy bun and she shielded her eyes from the blazing California sun with a pair of gold round-framed sunglasses.

Though she was taking some time out on Thursday, Lucy has also been prepping for the release of her forthcoming feature The Storied Life of A.J. Fikry. 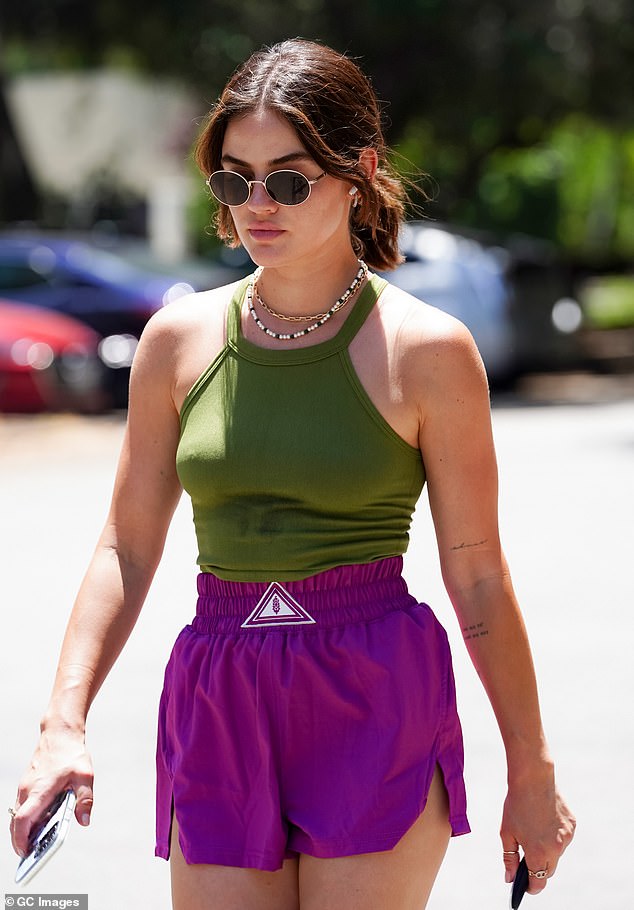 Flawless: Her brunette hair was tied back in a low messy bun and she shielded her eyes from the blazing Southern California sun with a pair of gold round-framed sunglasses 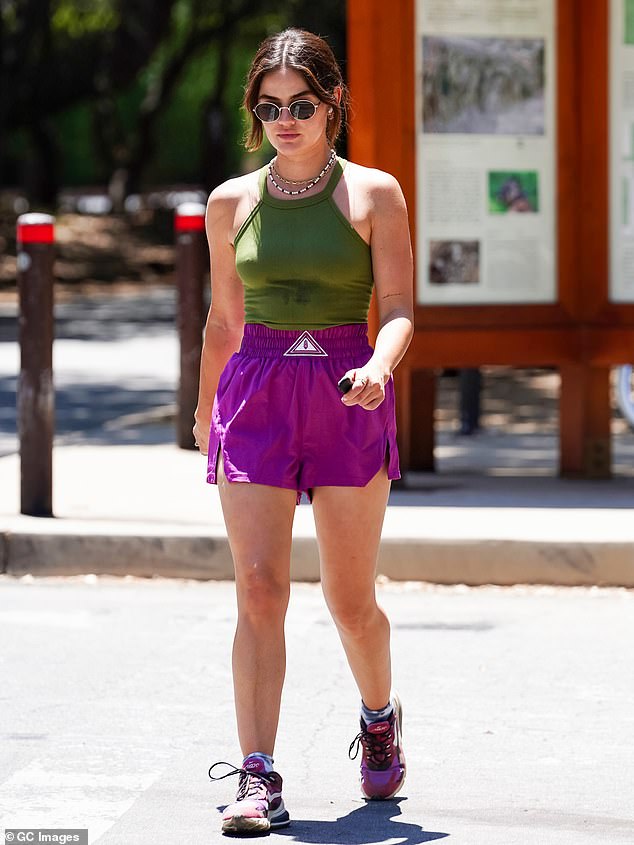 Leggy: The actress coupled her vibrant pants with a khaki string top and purple sneakers as she soaked up the sun

The upcoming movie is based on Gabrielle Zevin’s novel of the same name, which was published in 2014.

The film is centered on a bookstore-owning widower whose life takes a downturn after his precious collection of Edgar Allan Poe’s poetry is stolen.

However, the character’s life is drastically changed after he receives a mysterious package.

Lucy is currently set to portray a woman named Amelia in the upcoming feature, and her casting was announced last July.

Other cast members include Christina Hendricks, David Arquette and Kunal Nayyar, who will portray the movie’s titular character.

In addition to penning the original novel, Zevin returned to write the forthcoming movie’s screenplay. 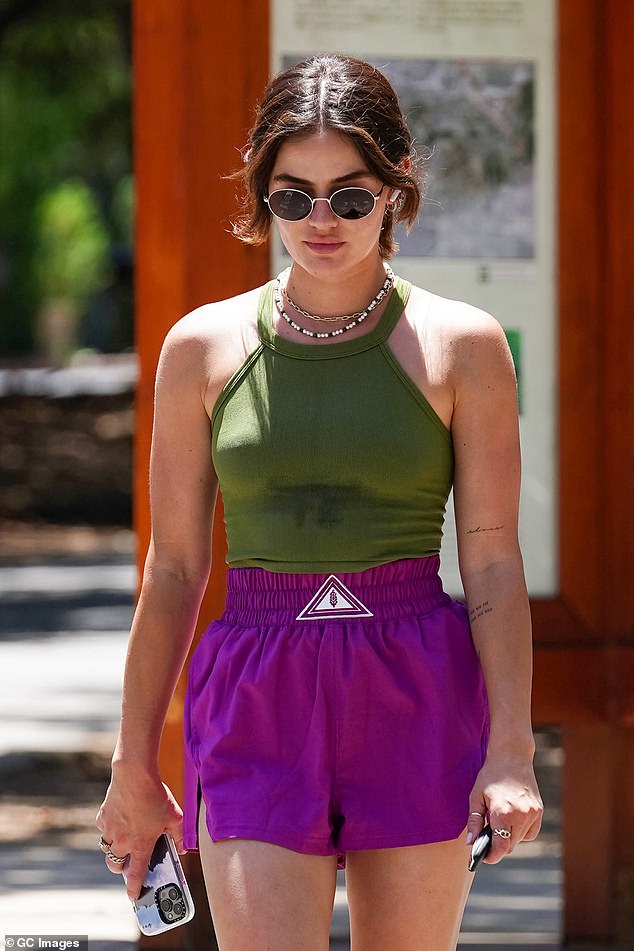 Natural beauty: Lucy appeared to be makeup free, which allowed her to showcase her seemingly flawless complexion

Lucy, Nayyar and Hendricks will all serve as three of the movie’s executive producers.

Producer David Garrett previously spoke about the project during an interview with Variety, where he praised the book on which the future movie is based.

‘The reason this is such a wonderful story with such great characters, is that the script is hewn from the most wonderful source material,’ he said.

Garrett went on to express that the film would showcase deep levels of drama in an ultimately positive manner.

‘It shines light on those connections which are at the heart of all human relationships in such a joyous and life-affirming fashion,’ he stated.

The Storied Life of A.J. Fikry’s prospective release date has not been publicly announced as of yet. 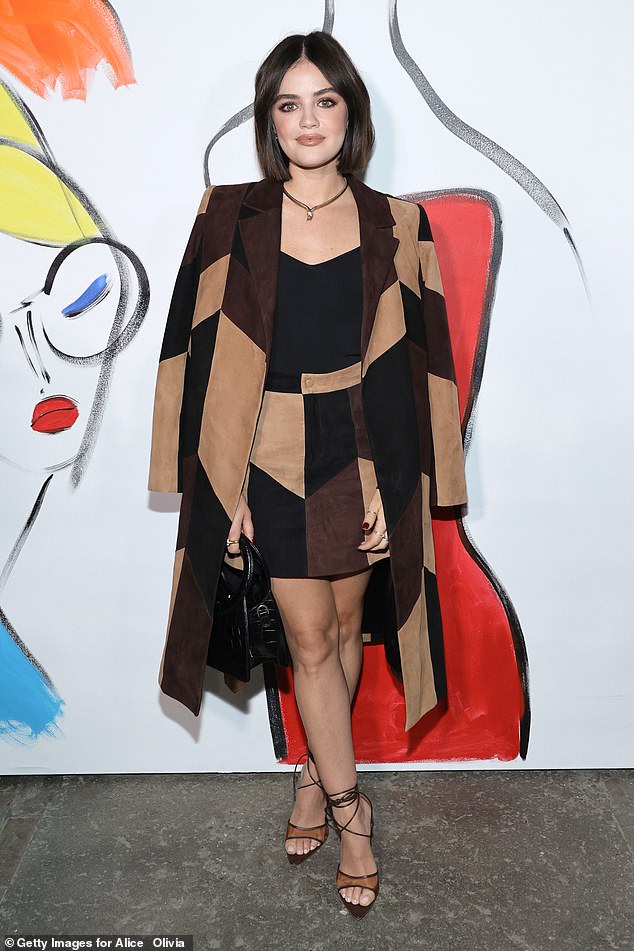 Latest project: Though she was taking care of personal business on Friday, Hale has also been prepping for the release of her forthcoming feature The Storied Life of A.J. Fikry