Officials at a college basketball game between Loyola Chicago and Duquesne had to unexpectedly stop the clock after a delivery guy stepped on the court mid-game to complete an order.

The delivery guy, straight out of nowhere, seemed lost as he entered the floor at the Palumbo Center in Pittsburgh, Pennsylvania, with a little less than 17 minutes left in the second half of Wednesday’s game.

With the score being at 40-37 in favor of the Loyola Ramblers, the referee hand-signaled the individual to immediately get out of the way. 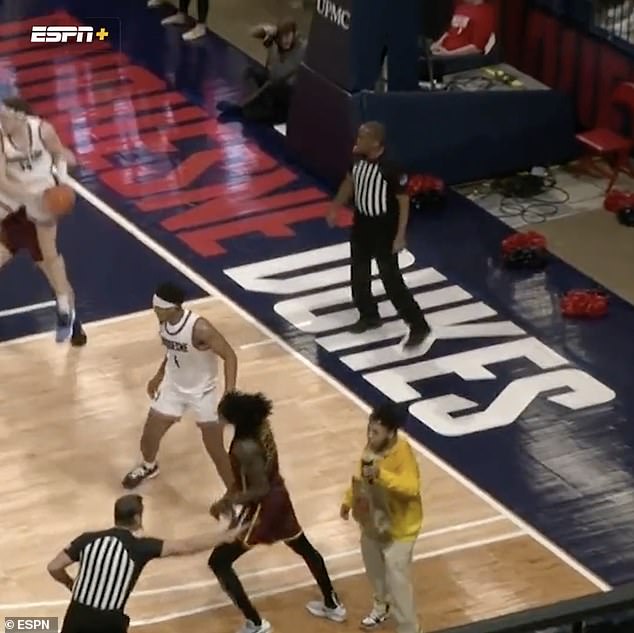 Lost, the delivery driver was told to get off the floor by the ref’ midway through the second half

Confused, the delivery guy stood still on the court while holding a large soda and paper brown bag from McDonald’s. He even looked at the referee, as if he were the one who was in the wrong.

‘Did a delivery guy just walk on the court,’ tweeted ESPN’s Sports Center.

It remains unclear who exactly ordered the food in the middle of a NCAA Division 1 basketball game.

Postgame, a college sports writer for the Pittsburgh Post-Gazette shared an update on what transpired afterwards on Twitter.

‘Ref came by and said that it was a first for him,’ said Abby Schnable. ‘Also the guy who was supposed to get the food is on the video board. He got his MCDs.’