EXPRESS INFORMER > Travel > Love The Beatles? Then all you need is Hamburg where the Fab Four first performed 60 years ago

Hamburg has long been a thriving port. And ports need a lot of ropes. So, ropemaking was an important trade in the 17th century, when those who made them chose a long stretch of ground in the St Pauli district to produce their wares.

But, in truth, I am not here to learn about the ropes. Reeperbahn has another claim to fame. Almost 60 years ago to the day, a singer/guitarist called Tony Sheridan hired a band from Liverpool to back him at the Indra Club at the far end of the street. The band was called The Beatles.

Vibrant: Hamburg in Germany has long been a thriving port. Pictured is the striking HafenCity and Blue Port

Over the next two years, they would play nearly 300 gigs in the clubs in the area. Along the way, they would find a new drummer (Ringo Starr) and lose their handsome bass guitarist (Stuart Sutcliffe). One of the band (George) would lose something else — his virginity.

As John Lennon put it, ‘I might have been born in Liverpool — but I grew up in Hamburg’.

Reeperbahn was a red-light district where the lights were redder and the ‘acts’ bluer than anywhere on Earth. But on an overcast August morning in 2020, the Reeperbahn is a dreary sight. The bars are shuttered and the bin lorries are out.

What I need is a nice German lady with a ukulele to cheer us up.

And here she is — Stefanie Hempel, and her ukulele, at Beatles-Platz, with its four stainless steel sculptures of the band. She strums the chords to I Saw Her Standing There and we all join in with the ‘whoooos’.

Of course we do. Stefanie is our guide to The Beatles’ Hamburg and a group of us are all Beatles fans. We check out the Indra, the riotous Kaiserkeller, where they met Ringo, and the site of the glamorous Star Club.

We gaze at their digs — the Gretel and Alfons pub and the Bambi Kino children’s cinema where the lads would try to grab a few hours’ sleep between the screen and the ladies’ toilets. By the end of their Hamburg stint, The Beatles were doing well enough to be upgraded to a hotel, the Pacific on Neuer Pferdemarkt.

The 1994 movie Backbeat captures those times well, especially John’s relationship with Stuart Sutcliffe. Stuart couldn’t really play — much to Paul McCartney’s frustration — but he looked great. His Hamburg girlfriend, photographer Astrid Kirchherr, gave him the moptop haircut which the band would make famous.

Astrid died in May this year, just short of her 82nd birthday, and 58 years after her beloved Stuart succumbed to a brain haemorrhage in Hamburg.

Was Stuart’s death the result of a fight with John? That’s what British newspapers recently rehashed at length. Stefanie won’t have a word of it. Nor will Rosi, Tony Sheridan’s ex-wife, whom we meet at an Indra tribute concert. 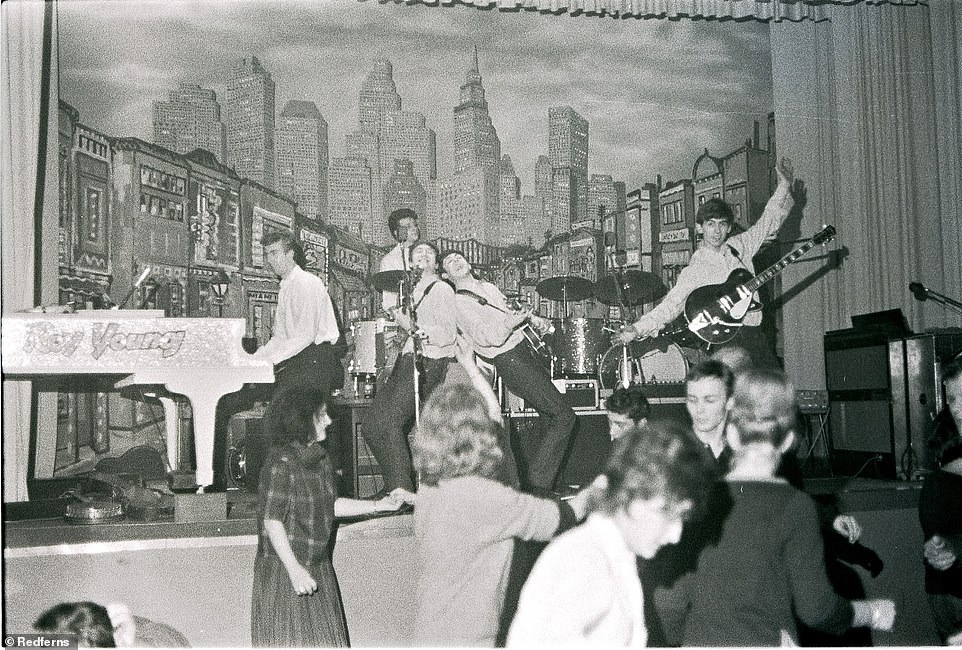 Come together: The Beatles and Roy Young at the Star Club, Hamburg, in 1962

We have to be wrenched out of our Fab Four fest and be reminded that there is a city beyond the Reeperbahn.

Hamburg has been burned down (several times), bombed to smithereens and, more lately, seen its creative folk flee to trendier Berlin. But it always bounces back. We take a boat tour along the Elbe river through a second city of cranes and skyscraper-high stacks of containers. It’s certainly a lot more prosperous than Liverpool’s docks, even if modern ports are lifeless, automated places compared with the Hamburg of The Beatles’ youth.

Not so the riverfront, which is alive with the sound of buskers and beer drinkers. Towards St Michael’s church, there are diners sitting outside tapas bars, and galleries of the Neuer Wall shopping street are positively Italian.

Otherwise, the Hamburg skyline would be recognisable to J S Bach’s son, Carl Philipp Emanuel, who was Kapellmeister at St Michael’s between 1768 and 1788. To this day, no one is allowed to build higher than the spire of the church. The Elbphilharmonie concert hall came in just a few metres lower when it opened last year, transforming the riverscape. It’s one of Europe’s most extraordinary new landmarks, with a curved, sail-like glass auditorium atop a giant warehouse.

But for British visitors, Hamburg is all about The Beatles. Maybe not just the British ones.

Stefanie says she was doing a tour once and a scruffy American in a hoodie tagged along. Turns out it was Bob Dylan, keen to see where his old mates used to play.