Haris Namani’s future on Love Island has been cast into doubt after shocking footage of him punching a fellow reveller on a boozy night out has emerged online.

The show has been plunged into chaos after a video surfaced on social media showing the TV Salesman, 21, landing blows on another party-goer in the street.

In the distressing clip, taken last May in Doncaster, Haris sparred with his opponent, knocked him to the ground and shouted: ‘I’m not a bully… on my mum’s life’, while being encouraged by a friend behind the camera.

Street brawl: Haris Namani’s future on Love Island has been cast into doubt after shocking footage of him punching a fellow reveller on a boozy night out has emerged online

After the video emerged on Snapchat, it was published by The Sun. A friend of Haris’ told the publication: ‘We were all surprised when we heard Haris was going on Love Island, he’s got quite a bit of a temper on him and if someone says something he’s more than prepared to have a fight.

‘He’s got an advantage being a boxer and he knows he can cause damage because he trains four times a week, he knows what he is capable of because of his training. That kind of stuff has to stay in the ring.

‘I’m surprised ITV didn’t do further checks, I saw the row between him and Shaq and wasn’t surprised in the slightest. That’s the type of guy he is. What you see is what you get.’ 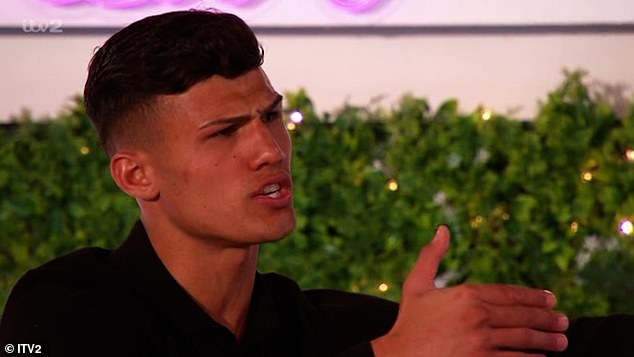 Future: After the video emerged, bosses issued a statement following reports Haris’ future involvement in the show hangs by ‘the thinnest of threads’

After the video emerged, bosses issued a statement following reports Haris’ future involvement in the show hangs by ‘the thinnest of threads’

A representative for Love Island said: ‘Language and behaviour in the Villa is always closely monitored, and Islanders are reminded of what we consider acceptable during their time on the show.

An ITV source added to MailOnline background checks are carried out prior to islanders entering the show and that the training programme tells the cast how they should conduct themselves in the villa and what is considered unacceptable behaviour.

The insider told us: ‘This training is their opportunity to learn and gain perspective from any mistakes or errors of judgement that have been made prior to going on the show.’