Evidence of a previously unknown ancient civilisation that existed for around 800 years has been found in Southern Turkey.

Archaeologists stumbled across an inscribed rock which reveals the existence of the long-lost civilisation after a farmer found it in an irrigation canal.

The stone was inscribed with hieroglyphs in the ancient Luwian dialect and experts translated the now extinct language.

This revealed the existence of a previously unknown people and their ruler, King Hartapu.

The hieroglyphic message regales readers with the heroic tale of how King Hartapu conquered Phrygia—the home of the legendary King Midas.

No name has yet been given to the civilisation or its capital city, which is thought to have spanned more than 300 acres in its prime.

It is believed the empire may have existed from between 1400BC to around 600BC.

Archaeologists in Turkey have stumbled across an ancient inscribed rock which may real the existence of a long-lost civilisation. The stone was found in an irrigation canal and is inscribed with hieroglyphs in the ancient Luwian language (pictured)

Researchers from University of Chicago were working on a site in southern Turkey called Türkmen-Karahöyük last year when a local farmer mentioned the stone.

He had seen it the previous winter almost submerged in water and laden with bizarre and unfamiliar markings.

‘We rushed straight there, and we could see it still sticking out of the water, so we jumped right down into the canal—up to our waists wading around,’ said assistant professor James Osborne of the university’s Oriental Institute.

‘Right away it was clear it was ancient, and we recognised the script it was written in: Luwian, the language used in the Bronze and Iron ages in the area.’

Translated by scholars at the Oriental Institute, it boats of defeating the legendary King Midas.

Midas may have been an enemy of the ancient and newly-discovered society, and is a prominent character in Greek and Roman mythology for his fabled ability to turn things to gold.

Dr Osborne said the city likely spanned as wide as 300 acres at its peak and would have been one of the largest ancient cities of Bronze and Iron Age Turkey.

They don’t yet know what the kingdom was called, but its discovery is revolutionary news in the field.

‘We had no idea about this kingdom. In a flash, we had profound new information on the Bronze Age Middle East,’ said Dr Osborne.

The farmer guided the excited scientists to the site of the stele, an ancient tall and thin slab of stone with inscriptions, and helped extract it from the water.

It was then taken to a local museum for cleaning, photographing and translation. 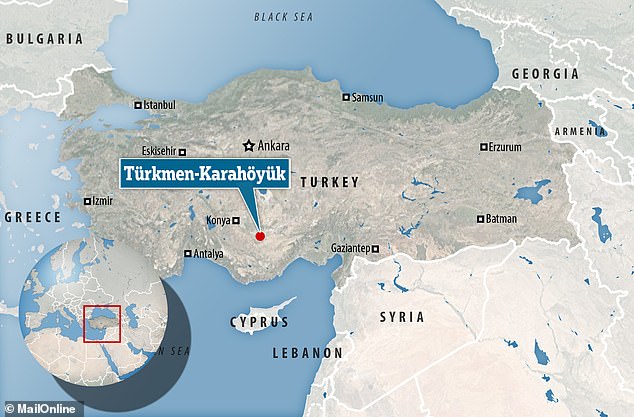 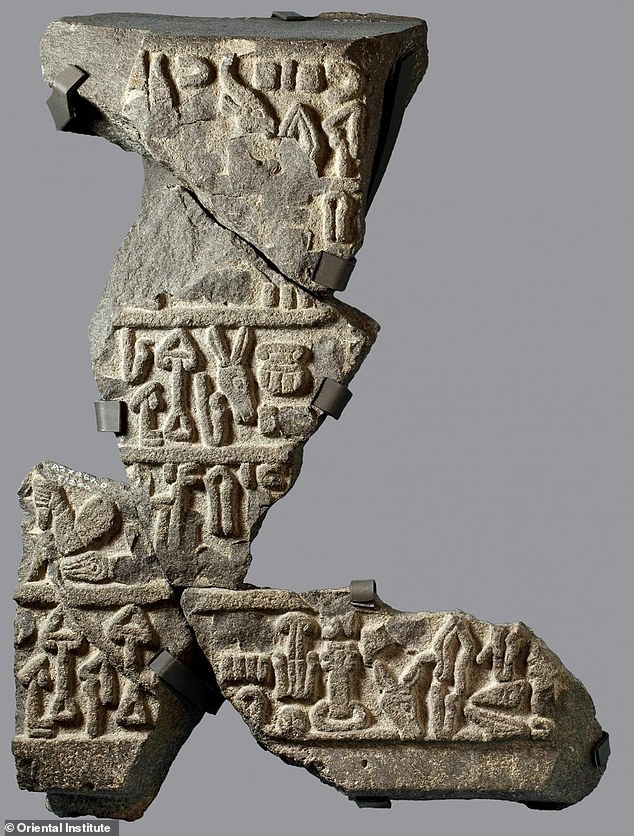 The hieroglyphs were written in Luwian, one of the oldest branches of the Indo-European languages. When translated, the rock spoke of King Hartapum. Pictured, previous examples of the hieroglyphs on another ancient rock 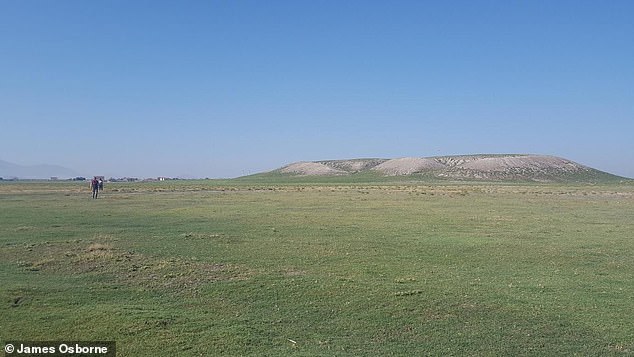 Dr Osborne said the city likely spanned as wide as 300 acres at its peak and would have been one of the largest ancient cities of Bronze and Iron Age Turkey. They don’t yet know what the kingdom was called, but its discovery is revolutionary news in the field. Pictured, the site of the find and where the ancient kingdom may have existed

The hieroglyphs were written in Luwian, one of the oldest branches of the Indo-European languages.

A unique language written in hieroglyphic signs native to the Turkish area, Luwian is read alternating between right to left and left to right.

The inscription, translated by Petra Goedegebuure and Theo P.J. van den Hout, features a special hieroglyphic marking that indicates a message from a monarch.

Further analysis revealed a specific mention of a king called Hartapum. Experts speculate that the site at Türkmen-Karahöyük was probably his capital city.

The stone tells the tale of King Hartapu’s conquest of the nearby kingdom of Muska, better known as Phrygia—home to King Midas.

‘The storm gods delivered the [opposing] kings to his majesty,’ the stone read.

It is thought, according to clues from how the prose was composed, the stone dates back to the 8th century BC, around the same time Midas is thought to have ruled.

The find sheds light on a long-standing mystery in Turkish ancient history.

Less than ten miles away from where the stone was found is a volcano with a well-known inscription in  hieroglyphics.

It refers to a King Hartapu, but exactly who this was or what kingdom he presided over has been unknown, until now.

More excavations are planned at the site for this summer.

‘Inside this mound are going to be palaces, monuments, houses. This stele was a marvellous, incredibly lucky find—but it’s just the beginning,’ Dr Osborne said.