Foiled! Lorry driver is jailed for 12 years after police found £1.25million of heroin stashed inside delivery of CRISPS after stopping vehicle in Essex port

A lorry driver has been jailed for 12 years after police found £1.25 million worth of heroin stashed inside a crisps delivery.

Dariusz Urban, 49 (pictured), was driving a lorry where Border Force officers found  25kg of heroin with a six-figure street value hidden in cover load of crisps

Dariusz Urban, 49, was intercepted as he drove a lorry into Harwich International Port, Essex.

Border Force officers found 25kg of heroin with the six-figure street value hidden in a cover load of crisps.

Mr Urban, of Ostrzeszow, western Poland, admitted attempting to import Class A drugs and was sentenced at Chelmsford Crown Court on Thursday.

When searching the lorry, the officers discovered 50 packets of drugs hidden inside two ramps in the vehicle.

The lorry had arrived into Harwich having travelled from Poland, via the Netherlands.

His arrest came after a military-grade encrypted communication system used by organised criminals was hacked by law enforcement.

EncroChat was an encrypted platform where users could speak privately between specially-designed handsets, thought to be used exclusively for criminal purposes.

Because of the information found through the hack, the National Crime Agency (NCA) was able to tip off Border Force. 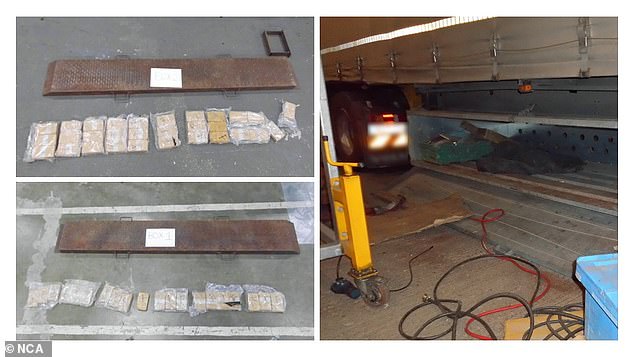 When searching the lorry, the officers discovered 50 packets of drugs hidden inside two ramps in the vehicle (pictured)

They were waiting for Mr Urban at the Essex port on April 15 this year.

He was found with an EncroChat phone and was one of hundreds of arrests made as part of a UK-wide probe known as Operation Venetic.

After the NCA publicised the arrest, an international drug supplier shared a screenshot of the story on EncroChat, asking the suspected UK recipient of the drugs: ‘This you?’ 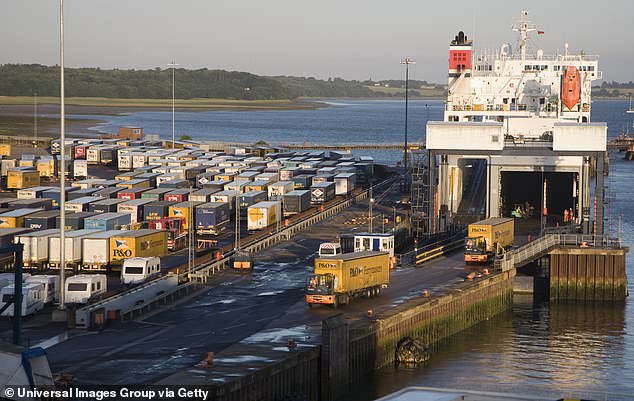 Mr Urban was intercepted as he drove a lorry into Harwich International Port, Essex (pictured), after a encrypted communication system used by organised criminals was hacked by law enforcement

The supplier has since been arrested by Dutch authorities in the Netherlands.

NCA deputy director Matt Horne, who is the gold commander on Operation Venetic, said: ‘Dariusz Urban’s sentencing is another example of the impact the NCA, Border Force and UK policing are having on serious organised crime.

‘Like many other cases, with this operation we were able to plot how the drugs would be picked up and moved and when would be best to strike.

‘There is much more to come.’