We tend to think of Swedish design as forward-thinking, practical, stylish — and Polestar is no different.

The electric car firm with Chinese owners, a lineage harking back to Volvo and ethical vegan interiors is all neutral tones and sleek lines.

But the beating heart of this performance electric car-maker is now increasingly in Britain, as I have just witnessed for myself.

Charged: The Polestar 2 is priced from £43,150 for the single-motor version which has a range of up to 297 miles and accelerates from rest to 60 mph in seven seconds

Polestar is one of a new breed of ‘disruptor’ electric car manufacturers aiming to challenge and shake up the traditional market.

If you haven’t yet fully registered the ambitions of this Scandinavian rival to Elon Musk’s Tesla, here’s what you need to know.

Polestar has about 340 employees in the UK, but that is set to rise. It has a new cutting-edge research and development engineering centres in Coventry and Warwickshire. 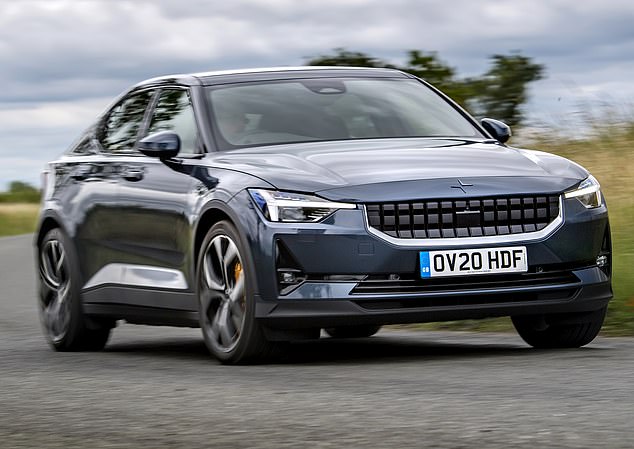 On the up: Polestar boasts a lineage harking back to Volvo and ethical vegan interiors is all neutral tones and sleek lines 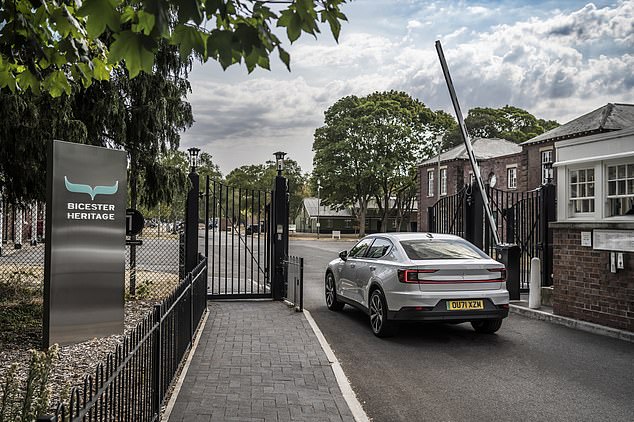 Performance: The more powerful dual motor Polestar 2, costing from £49,550, has a range of up to 301 miles and accelerates from rest to 60 mph in 4.5 seconds

In December, it is opening a new commercial headquarters and customer Test Drive Hub at Bicester Heritage; and a major new UK flagship showroom is set to open imminently, adding to those already in Manchester, Solihull in Birmingham and at the Westfield shopping centre in Shepherd’s Bush, London.

Spun off from Volvo in 2017 as a standalone Swedish performance electric vehicle manufacturer based in Gothenburg, Polestar is a subsidiary of Chinese car giant Geely.

With two models already launched — the 1 and 2 — Polestar will be launching four new models over the next five years following the same simple numeric pattern: 3, 4, 5 and 6.

Past and future Polestars 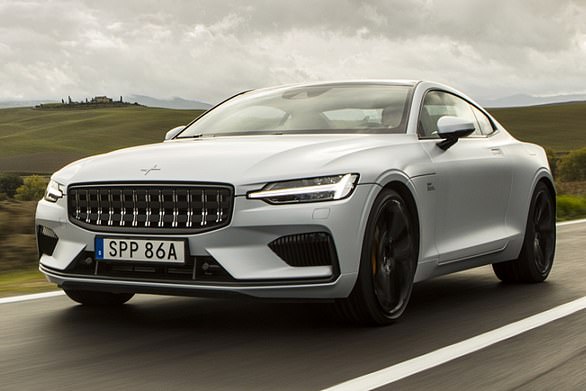 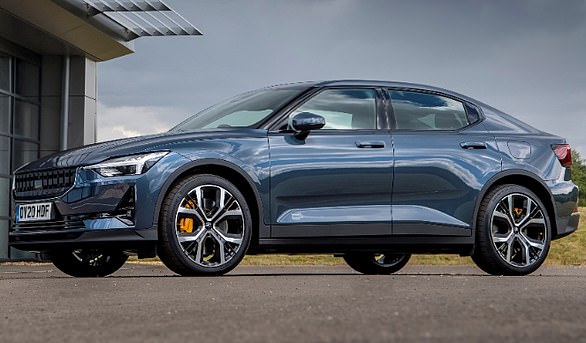 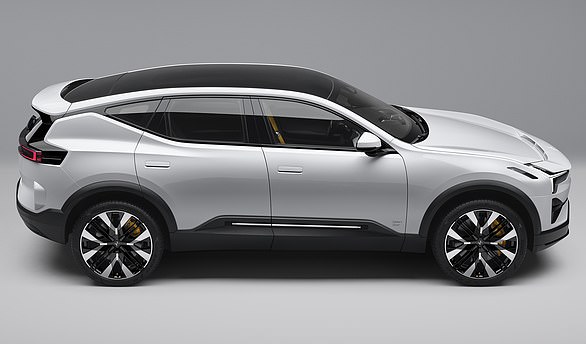 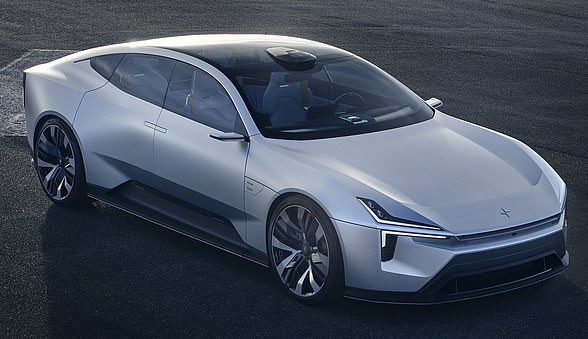 Polestar 5 — 2024 The firm’s scintillating, four-door grand tourer — boasting a whopping 874hp — is slated for launch in 2024 and will take on the Tesla Model S, Porsche Taycan and Audi e-tron GT 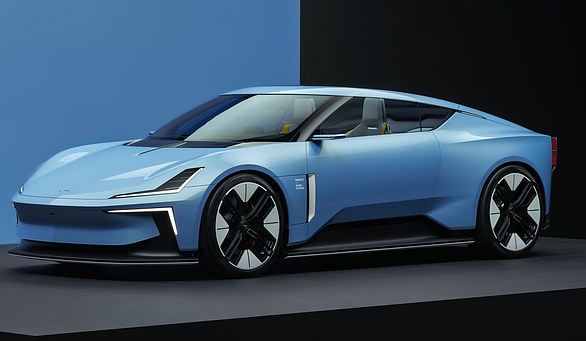 Eyes on the prize

To see the firm’s progress for myself, I’ve just paid an exclusive visit to its new research and development engineering centre based at MIRA — the Motor Industry Research Association near Nuneaton in Warwickshire.

There, the growing team is set to expand to about 500 and there’s an additional centre down the road in Coventry.

The MIRA base is located at the heart of the UK’s motor industry with the likes of Jaguar Land Rover, MINI, BMW’s Hams Hall engine plant, and many more suppliers all within striking distance. 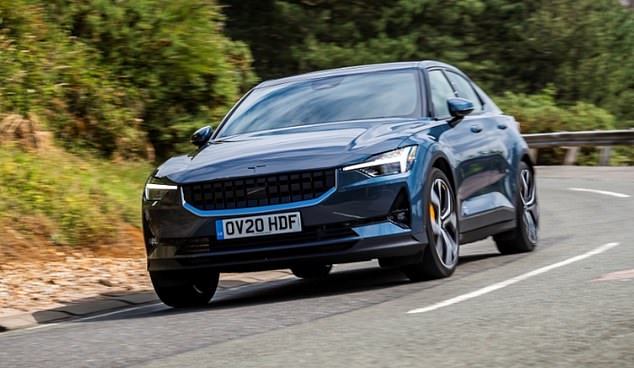 Practical: The Polestar 2 is priced from £43,150 for the single-motor version which has a range of up to 297 miles and accelerates from rest to 60 mph in seven seconds 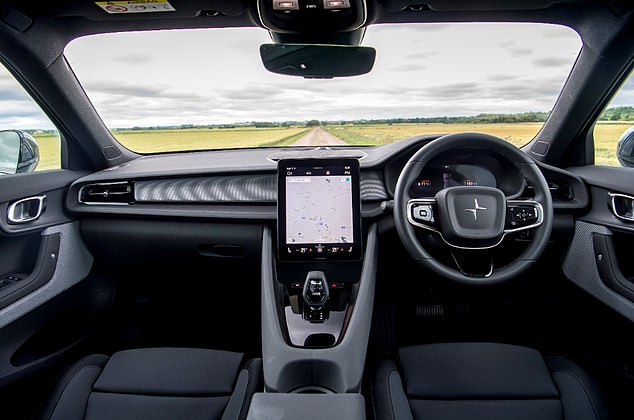 Once through security and into the sprawling MIRA site, where much secret new car testing is carried out, I made my way to the Polestar building dominated by a large, cavernous workshop in which a variety of electric test cars were lined up in bays in various states of ‘undress’.

Most of the test cars being worked on were the imposingly streamlined Polestar 5, a high-performance, 874bhp, four-door GT set for launch in 2024 to take on the Tesla Model S, Porsche Taycan and Audi e-tron GT.

One of the test cars, lightly camouflaged, had its first public dynamic outing driving up the hill at this year’s Goodwood Festival of Speed.

Unveiled initially as the prototype Precept, there will be on-road testing in the UK, too.

But under tight, black covers I also spied the silhouette of the new Polestar 6 electric roadster — also shown statically at Goodwood — which is based on the firm’s same bespoke bonded aluminium platform, but is shorter.

Polestar announced in August that this battery-powered hard-top convertible is to be launched in 2026 as its ‘hero’ car that ‘redefines sports roadsters for the electric age’.

Powered by twin motors developing 884 hp, it is expected to accelerate from rest to 62 mph in just 3.2 seconds up to a top speed limited to 155 mph. The initial 500 limited edition versions sold out within a week.

The company’s journey began in 2017 with the unveiling of the Polestar 1, which was built between 2019 and 2021 as a low-volume petrol-electric 609 hp performance hybrid two-seater GT, rather than a pure electric car.

Polestar 2 followed and is the sole model on sale today, priced from £43,150 for the single-motor version, which has a range of up to 297 miles and accelerates from rest to 60 mph in seven seconds.

In October, Polestar will launch its first SUV — Polestar 3 — ahead of first deliveries next year and is expected to cost from £70,000. A smaller crossover SUV — Polestar 4 — is also in the pipeline for launch next year.

For consumers, arguably the most significant change will be Polestar’s boutique showrooms — called ‘Spaces’ — where you can view the vehicles. But staff are forbidden from selling the cars to you with the usual showroom rhetoric.

Customers can look over models on offer, take advice from non-commissioned specialists, configure their ideal vehicle on screens, and even take a road test.

But they can only buy their car online — from home or with help in store.

Jonathan Goodman, head of Polestar UK, says: ‘We are changing the face of automotive retail. It’s an entirely customer-focused journey.’

Clean up your act on the school run

With the new school year well under way, a survey of 2,000 UK parents found the average school run is 10.4 miles.

The research from Citroen also found that parents drive their children to school on average 3.5 times a week, with public transport, lifts from other parents, walking and cycling making up the rest of the trips.

And 7 per cent of ‘taxi of mum and dad’ respondents reported having to cover more than 30 miles during the school run.

With the cost-of-living crisis in full flow, Citroen has calculated that parents driving its e-C4 electric models, with a range of 219 miles, could complete up to 20 clean-air school runs on a single charge with zero emissions.

One in five parents (19 per cent) said they were strongly concerned about vehicle emissions outside schools, and 41 per cent were somewhat concerned.

Previous research carried out in London found that children are exposed to five times more air pollution on the school run than when they are in school.

Changing weather suggests autumn is well on its way, so with perfect timing Nissan has launched a fourth-generation X-Trail off-roader designed to cope with all the elements.

The range’s biggest seller is expected to be the ‘e-POWER’ hybrid — which has a 1.5 litre turbo petrol engine that generates electricity for the 150kW front motor to drive the wheels.

It has the option of a dual-motor e-4ORCE all-wheel drive system which allows the car to accelerate 0-62mph in seven seconds. 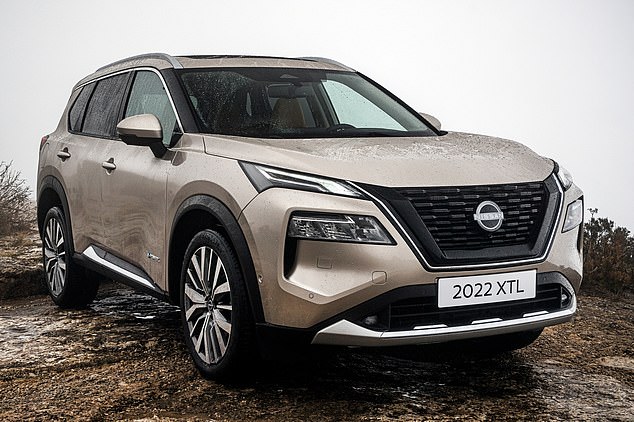 The X-Trail ‘e-POWER’ hybrid — which has a 1.5 litre turbo petrol engine that generates electricity for the 150kW front motor to drive the wheels

There is a choice of five or seven seats, while an ‘e-Pedal Step’, which allows drivers to accelerate and brake using one pedal, is another option.

There is also a two-wheel-drive mild-hybrid version — using the 163hp 1.5-litre petrol engine to power the wheels.

So you could be paying £48,155 before choosing any additional extras. 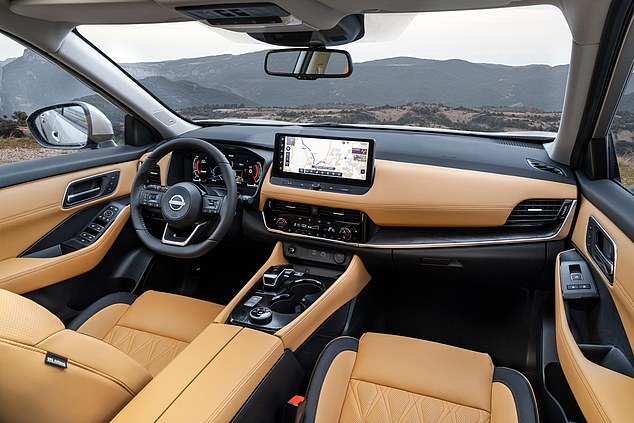