The 4,000 capacity flagship hospital was opened by Prince Charles via video link almost two weeks ago and is designed to handle a large surge in coronavirus cases.

However data circulated to health chiefs and seen by the Health Service Journal (HSJ) shows some hospitals have been able to double their ICU capacity, to 1,555 beds, despite rising levels of infections.

It also showed only 19 patients were receiving treatment over the Easter weekend at the facility located in the Docklands.

Workers help prepare the ExCel London centre, which has been made into the temporary NHS Nightingale Hospital 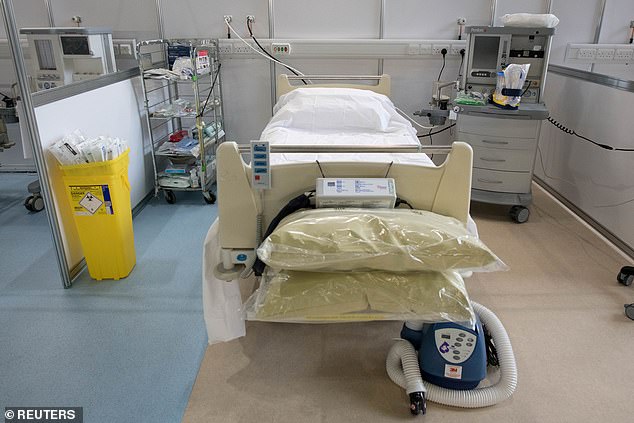 A hospital bed and respirator at ExCel London, seen inside during its conversion into the temporary NHS Nightingale Hospital

Chief medical officer Chris Whitty told the media briefing on Monday last week: ‘If we end up in a situation where we have more ICU beds [throughout the outbreak] than we absolutely need, that will be a success.’

And Health Secretary Matt Hancock on Sunday said the NHS was increasing capacity for critical care beds and said: ‘The latest figures show that in Great Britain we have 2,295 spare critical care beds, up 150 from yesterday.’

Six other NHS Hospitals have been announced so far – in Birmingham, Manchester, Bristol, Harrogate, Exeter and Tyne and Wear.

The Manchester hospital was built in 14 days and is now ready to take its first patients, with a capacity of 750 beds.

The remaining hospitals that NHS England have announced to be built are still under construction.

An NHS Nightingale London spokesperson told MailOnline: ‘The good news is that NHS hospitals have continued to free-up capacity to look after all coronavirus patients who need our care, and it is incredibly reassuring for both staff and patients to have backup capacity at the Nightingale should it be needed in the months to come. NHS Nightingale London started admitting patients last week and will help to alleviate the pressure on ICU departments across London when needed.’​

It comes as an NHS boss has said a new Nightingale Hospital being built in the North East of England will not need to open if people maintain social distancing rules.

Workers have transformed an empty unit close to the Nissan car plant into a 460-bed facility which could be ready to take patients at the end of the month. 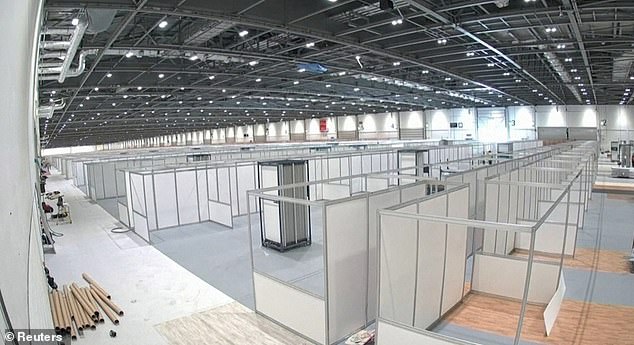 But the Nightingale Hospital in Washington, Tyne and Wear, will only open to patients if hospitals in the North East are unable to cope with the influx of coronavirus patients.

Martin Wilson, chief operating officer for Newcastle Hospitals NHS Foundation Trust, which is overseeing the project, said he does not think that will happen.

‘If people can all play their part in social distancing, if a vaccine comes along, my hope is that we don’t need to open.

The brand new unit is owned by Sunderland Council and was due to be used by Newcastle and Sunderland Universities as an innovation centre, focusing on the future of manufacturing including electric cars.

It has good access to the rest of the region, being just off the A19 and not far from the A1.

If it does open, it will be staffed by employees of local trusts, as well as returning medics and volunteers. 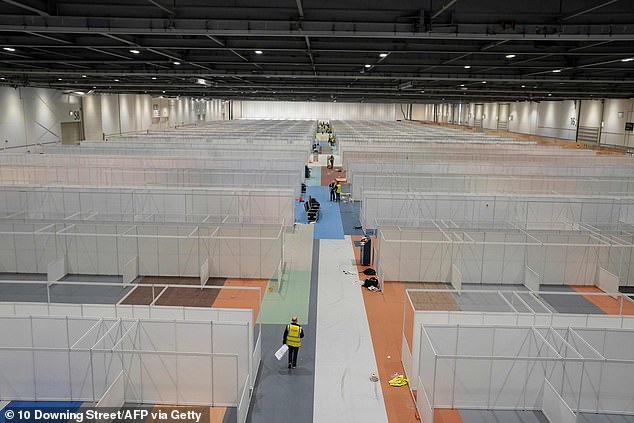 A handout picture released by 10 Downing Street, the office of the British prime minister on March 27, 2020 shows military and contractors building the Nightingale Hospital for novel coronavirus Covid-19 patients at the Excel centre

The Newcastle trust has stressed that it has enough PPE, that its ‘number one priority’ us protecting staff, and the new unit has designated ‘donning and doffing’ areas.

The main hall where the beds will be located measures more than 9,000 square metres – a standard football pitch is 7,140 sq m.

Visitors will not be allowed to see patients at the unit, but the trust is looking to use tablets to keep families in touch, as well as setting up a 24-hour telephone number for relatives to call for updates.

Prince Charles opened the London Nightingale Hospital by video link on Friday April 3, which has been converted for up to 4,000 patients.

The Prince of Wales told how he was ‘enormously touched’ to have been asked to launch the facility via video-link from his Scottish home at Birkhall.

His address came four days after Charles completed self-isolation following his own diagnosis, although he only suffered ‘mild’ symptoms. 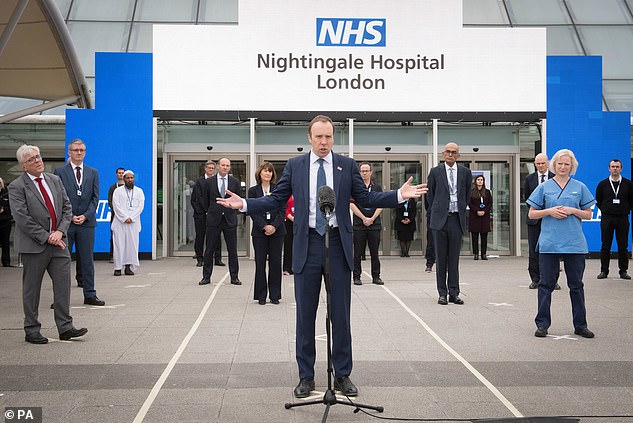 Health Secretary, Matt Hancock at the opening of the NHS Nightingale Hospital at the ExCel centre in London on April 3 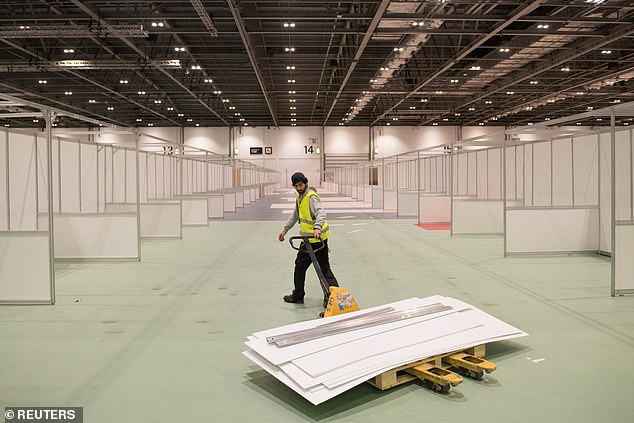 The opening was attended in person by Health Secretary Matt Hancock and Health Minister Nadine Dorries, who have also both had the virus but now recovered.

Charles told those gathered at the Hospital’s entrance: ‘I was enormously touched to have been asked to open the Nightingale Hospital as part of a mass mobilisation to withstand the coronavirus crisis.

‘It is without doubt a spectacular and almost unbelievable feat of work in every sense, from its speed of construction in just nine days to its size and the skills of those who have a created it.’

He went on to say: ‘I need hardly say that the name of this hospital could not have been more aptly chosen. Florence Nightingale, the Lady with the Lamp, brought hope and healing to thousands in their darkest hour. In this dark time, this place will be a shining light.

‘It is symbolic of the selfless care and devoted service taking place in innumerable settings, with countless individuals, throughout the United Kingdom.’

The plaque unveiled at the Hospital says it was opened by the Prince of Wales on April 3. 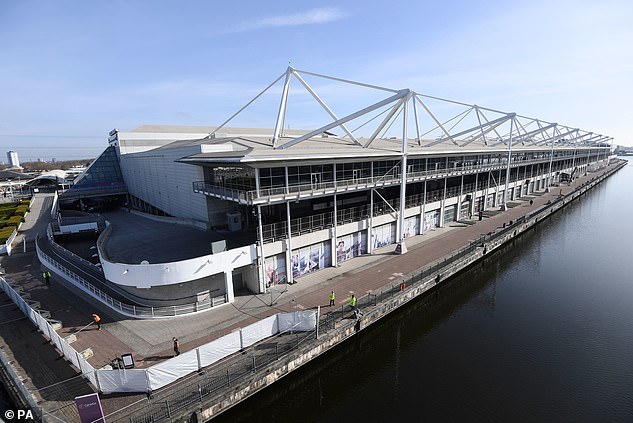 The ExCel centre in London, which has been made into the temporary NHS Nightingale hospital to help tackle the coronavirus outbreak 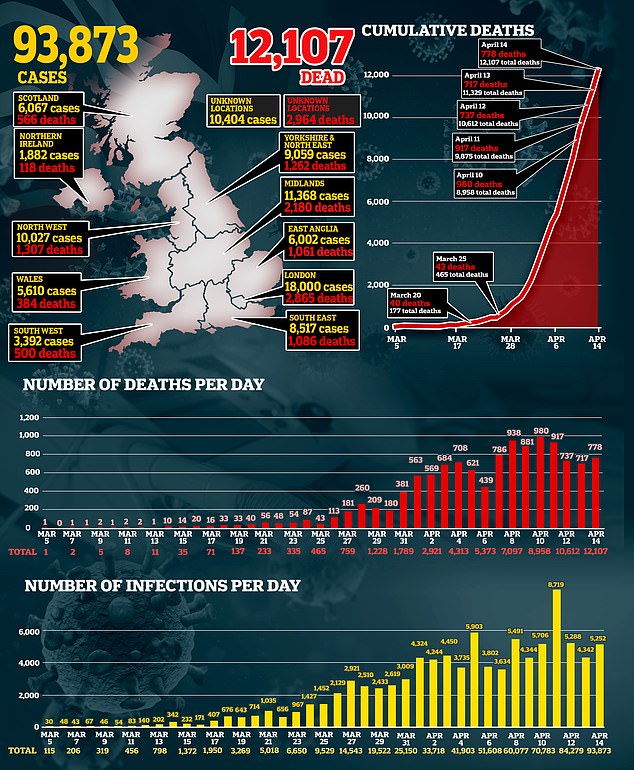 ‘This plaque is a tribute to the engineers, members of the armed forces, NHS staff, contractors and public volunteers who helped to build this hospital in March 2020,’ it says.

Mr Hancock praised all those involved in the setting up of the Hospital during a speech at the opening ceremony, in which he also paid tribute to the NHS and the way its staff are dealing with the virus crisis.

He said the ‘extraordinary project’, the core of which was completed in just nine days, was a ‘testament to the work and the brilliance of the many people involved’.

Mr Hancock added: ‘In these troubled times with this invisible killer stalking the whole world, the fact that in this country we have the NHS is even more valuable than before.’

How big is NHS Nightingale, who will it treat and why the name?

The NHS Nightingale Hospital is named after nursing pioneer Florence Nightingale, who helped soldiers during the Crimean War – fought from 1853-56. The Hospital’s wards will also be named after influential British nurses such as Seacole, Saunders and Kinnair.

– Where is it being built?

The new facility is being set up by converting the 100-acre site of the ExCel convention centre in Newham, east London. The location was only announced to the public on March 24, and Health Secretary Matt Hancock said on Thursday that similar facilities would soon be set up in Birmingham, Manchester and Glasgow.

A combination of NHS staff, contractors and up to 200 military personnel have taken part in construction – which was completed in just nine days. Some workers are reported to have taken on 15-hour shifts to get the work done as quickly as possible.

– Who will it treat?

The facility will be used to treat Covid-19 patients who have been transferred from other intensive care units (ICU) across London. Those who are admitted to the Hospital will already be on a ventilator and will remain at the Nightingale until their course of ventilation is finished, the Hospital’s chief medical director has said. Coronavirus patients suffering from other serious conditions – such as cardiac issues – will be cared for at other specialist centres.

– How many patients can it treat?

NHS Nightingale will have a 4,000 bed capacity and will be split into more than 80 wards containing 42 beds each. Mr Hancock said that it will be the ‘equivalent of 10 district general hospitals.’

Up to 16,000 staff may be required to run the facility at full capacity. Hundreds of volunteers from the St John Ambulance charity with differing levels of clinical training have volunteered to help out with operations, with around 100 expected to work every shift.

– How will they be looked after?

Staff working at the Nightingale will be able to sleep at nearby hotels once they finish their shift, the Hospital’s director of nursing, Eamonn Sullivan, said – though they can also choose to go home.

– Is there enough equipment and resources?

The Nightingale will use all ‘new kit’, but concerns have been raised that staffing the Hospital with bank staff might lead to shortfalls in other parts of the health service. Bosses at the Hospital are reportedly worried about the number of ambulances and trained crew needed to bring cases to the site. Draft clinical models seen estimate 60 ambulances will be needed to facilitate emergency transfers.