EXPRESS INFORMER > News & Politics > London court: Woman ‘lured her ex-boyfriend into an ambush before her new partner savagely beat him’

Woman ‘lured her ex-boyfriend into an ambush before her new partner savagely beat him with a baseball bat’, court hears

A woman has been accused of luring her ex-boyfriend into an ambush before her new partner beat him with a baseball bat, an Old Bailey judge has heard.

Mr Flory was imprisoned for assaulting Culhane but their relationship resumed when he was freed. Culhane then allegedly lured him to an address in Harefield, west London, where her new lover has been accused of trying to kill him.

Jamie Hattam, 33, who previously had a one-night stand with White broke down into sobs as she told the court she feared being branded a ‘snitch’ after giving evidence claiming she saw her former lover at the scene of the brutal attack.

She wept as she told the Old Bailey Mr Flory ‘looked like he was dying’ and said she was worried she would look like a ‘grass’ for giving evidence in court.

Crystal Culhane (pictured leaving the Old Bailey), 22, has been accused of recruiting James White, 22, to savagely beat her ex-boyfriend following his release from prison

Craig Rush, defending, asked the witness whether she had correctly identified White as the attacker having only met him three times.

Mr Rush asked the witness: ‘Before this night, 18 August, you’d seen him [three times] before.

‘Once when you first met him, once when you went out with him, and I don’t mean to embarrass you but you and he had a sexual relationship on that night, and once when you saw him at some shops.’

She said White had ‘lied about his age’ when they spent the night together, claiming he was older than he had been at the time.

‘It’s very obvious you don’t want to be here. I’m going to suggest there are two reasons.

‘The first is that it’s hard to give evidence at the Old Bailey. The second reason is you don’t want people to think you’re a grass or a snitch,’ Mr Rush said.

‘They’re my words but someone who gets somebody else into trouble,’ the defence barrister said. 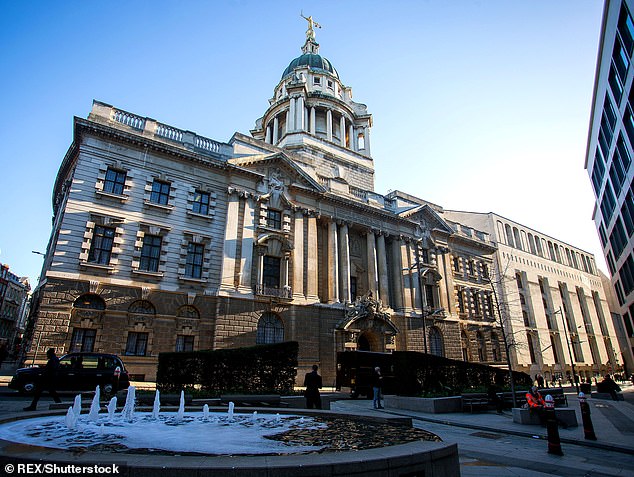 Jamie Hattam, 33, had a one-night stand with White before Paul Flory was savagely beaten on August 18 last year. She wept as she told the Old Bailey (pictured) Mr Flory, 33, ‘looked like he was dying’

Asked why she had described the man at the scene as blond rather than dark-haired like White, Ms Hattam said she had amended her witness statement since and felt sure it was him.

‘I took that out of my statement,’ the witness said.

‘[I was shown] CCTV. That’s what confirmed my suspicions that it was him.’

Ms Hattam said she did not witness White wielding the bat but saw the victim fighting for his life on the ground with the alleged attacker in the street outside the property.