By Daisy Graham-brown For The Daily Mail

A London council is rebelling against Sadiq Khan’s ‘unfair’ plans to extend a clean-air car charge zone by refusing to let traffic cameras be installed.

The Ultra Low Emission Zone (ULEZ) is set to be expanded across the whole of Greater London next year, forcing around 200,000 more vehicles a day to pay £12.50 to drive in the capital.

But the borough of Sutton in south London has vowed to fight the mayor’s expansion by refusing Transport for London (TfL) access to install enforcement cameras.

The council said: ‘We are taking this step to send a strong signal to the mayor that he must start listening to local people. Though the mayor… may attempt to force this unpopular decision on the residents of Sutton, we are clear that would be the wrong thing to do.

‘Sutton does not have the public transport links other boroughs rely on, like Tube and overground services. Instead, people here need cars to get around.’

The Lib Dem-controlled council said it wanted to see action on air pollution – but vowed it would not sign an agreement or cooperate with TfL. 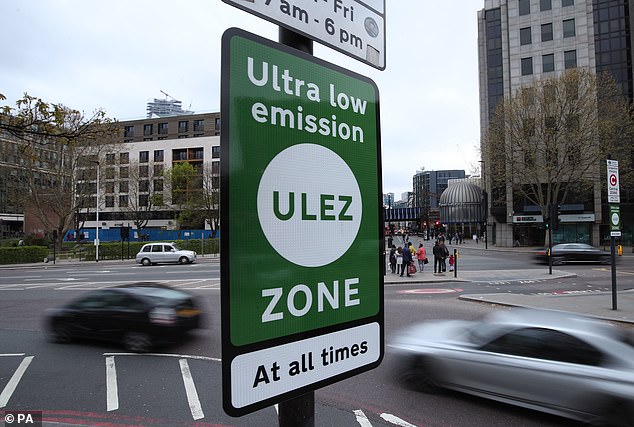 The Ultra Low Emission Zone (ULEZ) is set to be expanded across the whole of Greater London next year, forcing around 200,000 more vehicles a day to pay £12.50 to drive in the capital

TfL’s Alex Williams said: ‘Expanding the ULEZ is vital for public health in this city.

‘We know that there are more deaths that are attributed to toxic air in the city’s outer boroughs and that bringing in these world leading standards over a larger area will see millions more breathing cleaner air.

‘Our experience of these schemes shows that they work, with significant reductions in pollution since the first zone was introduced in 2019.’