Takeaway that was slapped with one London’s very first £1,000 Covid curfew fines insists it sold burger to customer at 10pm before he walked away FOUR MINUTES later

A Burger takeaway in London has been fined £1,000 for serving a customer just four minutes after curfew at 10.04pm last night.

Bim’s Burgers on Ilford Lane in Ilford was slapped with the charge after police found it had allowed a single customer to order at exactly 10pm and passed over the food 240 seconds later.

Under the coronavirus rules brought in by Prime Minister Boris Johnson on September 24, all customers must out of hospitality venues by 10pm.

The restaurant was issued the fine on the spot but a spokesperson said staff were under the impression they could take orders up to the 10pm cut off.

Bim’s Burgers on Ilford Lane in Ilford was slapped with a £1,000 fine after police found it had allowed a single customer to order at exactly 10pm and passed over the food 240 seconds later

Redbridge MPS said: ‘Bims Burger [sic], Ilford Lane breached COVID-19 restrictions by having one customer inside the premises waiting for his takeaway meal.

‘On looking at his receipt he was served 10pm on the dot and staff were not handing him his food until 10.04pm.

‘The supervisor on shift was issued a £1000 FPN on behalf of the owner.’

A spokesperson for Bim’s Burgers said staff were under the impression that if an order came before 10pm, they could serve a customer. 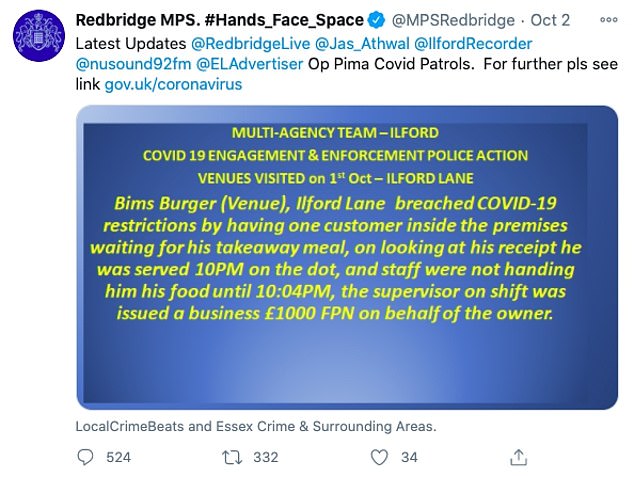 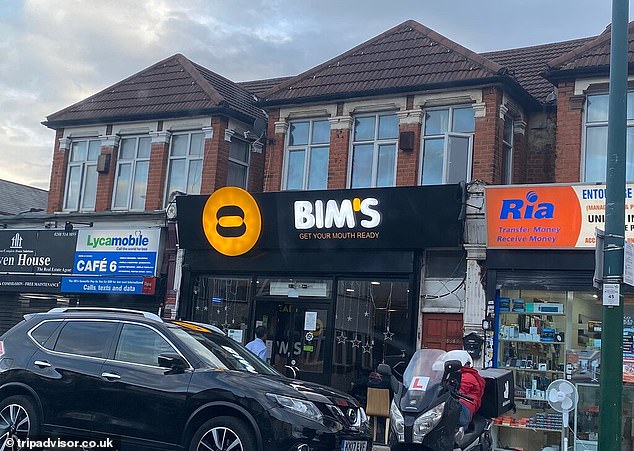 A spokesperson for Bim’s Burgers said staff were under the impression that if an order came before 10pm, they could serve a customer

The spokesperson told MailOnline: ‘We very much regret that our staff breached the Government’s 10pm curfew.

‘Our staff were under the impression that if an order was placed before 10pm it could still be served.

‘The food took less than four minutes to arrive and he left at 10.04 pm.

‘Six months’ of restrictions at a glance

‘Our staff were then shocked to be informed that they had breached the new laws by a matter of four minutes.

‘New rules regarding Covid-19 are being made thick and fast and sometimes it isn’t clear exactly how they should be interpreted.’

Bim’s Burgers added that the minor mistake was made ‘in good faith’ and that the company would have expected a warning rather than the fine given the circumstances.

The restaurant said: ‘Under the circumstances we think it would have been reasonable for us to receive a verbal warning as opposed to a £1000 fine, which amounted to an astonishing £250 per minute.

‘Had we served a customer at 10.15 or even later then without doubt this fine would have been fully justified.

‘We have always complied with the law and have carefully observed social distancing rules and the wearing of masks. This was just an unfortunate mistake.

‘However, we respect the police operation and our staff will obviously take greater care in future to continue to abide by the law.’

Two other restaurants were fined in Ilford last night: Fireaway Pizza on Ley Street, which was fined £1,000 for serving a customer at 10.20pm, and Spice on High Street.

On the second weekend since the new coronavirus rules were introduced in England, police have issued fines up and down the country for various breaches.

In Liverpool, a club was fined £1,000 for not enforcing social distancing measures.

Baltic Triangle club 24 Kitchen Street was fined after officers noted social distancing was not being observed at the venue at about 8.25pm on Friday.

Merseyside Police reported tables with more than six people gathered around them, customers walking around the bar area without face coverings, people drinking and gathered where there was no table, meaning table service rules could not be adhered to, and a lack of social distancing in the smoking area.

Chief Inspector Karl Baldwin said: ‘It is extremely disappointing that for the second weekend in a row we have been forced to issue a fine because a premises has failed in its obligations to act responsibly at a critical time for this city.

‘We have seen cases of coronavirus rise rapidly in Merseyside in recent weeks, and restrictions have increased as a result in an effort to curb the rise.

‘It is therefore totally unacceptable that anyone should disregard the very real threat posed by coronavirus in this way, and allow large groups to gather in such close proximity.’

Should there be a 10pm lockdown? The verdict from scientists

Top scientists cast doubt over Boris Johnson’s 10pm curfew on pubs, bars and restaurants to control coronavirus, warning the drastic move is unlikely to curb the spread of the disease.

One epidemiologist argued coronavirus ‘doesn’t understand the clock’, questioning why ministers have ordered all hospitality businesses to shut at that time.

And other infectious disease experts fear the curfew will be ineffective because it runs the risk of ‘compressing activity’, with all people leaving at the same time making areas busier.

Others argued it would simply be better to close all hospitality venues, meaning the spread of the virus would be curbed.

Why there should NOT be a 10pm curfew

Dr Michael Head, from the University of Southamptom, said closing all hospitality venues would be better as it would stop people going out, curbing the spread of the virus completely.

‘This would ensure that public health is prioritised, and business and staff are in a stronger economic position when they are allowed to resume,’ he said.

Paul Hunter, infectious disease expert at the University of East Anglia, said the measure should be abandoned as it will not prevent a second wave.

Cases are already rising quickly in the UK – which announced a record daily rise in cases to 7,146 yesterday – meaning efforts should instead be focused on the more vulnerable, he said.

Dr Stephen Griffin, associate professor in the school of medicine at the University of Leeds, joined calls for the measure to be abandoned as it will encourage people to gather in ‘large numbers’ when they quit hospitality venues at the same time.

He warned this could ‘erode compliance’ with other measures such as wearing face coverings and maintaining good hand hygiene.

It is also feared that when people crowd together with scant regard for social distancing, this increases the risk that the virus will spread if one of them is infected.

Why there SHOULD be a 10pm curfew

Other scientists have, however, praised the 10pm curfew as it will limit the consumption of alcohol – which has been labelled one of the biggest enemies of social distancing.

‘The more drunk you are, the less inhibited and less risk-averse you are,’ said Dr Jennifer Cole, from Royal Holloway University. ‘Closing bars and restaurants at 10pm… means people are likely to be sober enough to put on a face-covering on the train or bus home, and be careful around elderly relatives when they get home.’

Dr Rachel McCloy, from the University of Reading, said the measure simplified the rules – making them easier to follow for all.

Scientists are divided over this much touted benefit, due to the lack of data.

They expect to see a drop in the number of daily cases the UK is reporting within the next two to three weeks after it was imposed on 24 September, should it have had an impact.

If it does not, it’s likely the Government may impose tougher measures.