Locusts could be used to ‘sniff out’ cancer in humans, scientists have suggested after experimenting on the insect’s brains.

Researchers at Michigan State University found the critters could tell the difference between cells that caused three mouth cancers and non-cancerous cells.

They said the technique could offer a ‘very fast’ alternative to standard screening to detect cancer, with methods currently relying on swabs and scans in a lab.

Previous studies have seen creatures from dogs to ants used to spot cancer in humans, but research has rarely been moved forward because scientists are struggling to find a commercial benefit for this type of work.

Locusts could be used to sniff out cancer in humans, scientists at Michigan University say (file) 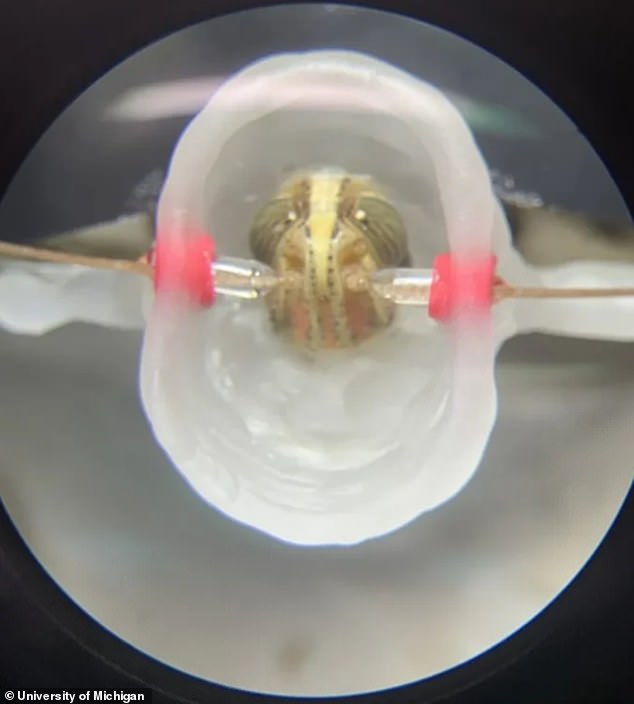 Pictured above is one of the locust’s in the study. Scientists exposed their brain and inserted electrodes. They then exposed the antennae (left and right going through the pink rings) to gases given off via cancerous cells

Can animals and insects ‘smell’ cancer?

Scientists have found that insects and animals can be used to smell cancer.

This has been through either sniffing the urine, breath or sweat of cancerous patients.

Scientists suggest this is because cancer cells produce a unique set of chemicals.

These are then released from the body via urine, breath and sweat — and can be detected by animals.

There has been little work to move forward with the commercial use of insects and animals for detecting cancer, however.

Scientists suggest this is because it is difficult to determine how the venture would make money.

Dr Sheryl Gabram, a surgeon at Emory University, previously told CNN: ‘It would need a lot of years of study and a lot of development.

‘It’s still far from that. People just thought it was too massive to embark on. [But] I think it’s an area of research that’s still promising.’

The study was published as a pre-print in BioRxiv, pending peer-review before its publishing in a medical journal.

Researchers exposed the insect’s brains and then placed electrodes into the areas linked to the antennae — which detect scents.

Gases emitted by three types of mouth cancer cells were then captured as well as from a non-cancerous cell from the same area.

These were exposed to the antennae, and scientists monitored the insect’s brain for a reaction.

Results showed that each cancer triggered a unique electric signal in the bug’s brain.

The non-cancerous cells also had their own unique signal.

Dr Debajit Saha, the biomedical engineer who led the study, and others wrote in their paper: ‘Our results demonstrate that three different human oral cancers can be robustly distinguished from each other and from a non-cancer… by evoking olfactory responses in the insect antennal lobe.’

They said the method was ‘sensitive’, ‘reliable’ and ‘very fast’.

But because the experiment required up to 40 neurons to work, the team had to expose between six and ten locust brains.

The scientists behind the method told the MIT Technology Review that they were working to reduce this number.

But Professor James Covington, an engineer at Warwick University in the UK who was not involved in the research, warned they should reduce the number.

‘The bees [used to detect explosives] get to have a nice life again afterwards,’ he said. ‘But for these locusts, it’s kind of a one-shot deal.’

It was not clear how well the method would work for other types of cancer, or if the locusts could smell the cancer in urine, breath or sweat — how it is normally detected.

Current methods for detecting cancer rely on swabs which give results between two and ten days later and scans of areas that may be affected.

Previous research has shown that dogs could be deployed to detect several cancers including those in the breasts and lungs by sniffing the breath of patients.

French scientists have even found that ants can be trained to spot cancerous and non-cancerous cells.

About 54,000 Americans are diagnosed with mouth cancer every year, according to official estimates.

Overall 60 percent of those who have the disease survive for more than five years after diagnosis. But the survival rate is as high as 90 percent for those where the cancer is spotted in the early stages.