Britons have been urged to stick to Covid lockdown rules as temperatures are set to soar to 57F (14C) today – and crowds prepare to gather in parks and beaches to enjoy the early Spring sunshine.

Police forces yesterday warned the public that they would be on patrol this weekend to ensure people were still abiding by the restrictions after huge crowds were out last week, with Sussex Police tweeting: ‘Don’t stop now.’

The South of England and East of Scotland will enjoy the best of the conditions with wall-to-wall sunshine expected today and Sunday, and highs of 57F (14C) forecast today in London and Aberdeenshire.

Those in Southampton and Norwich will also enjoy the best of Britain’s warmer Spring weather, with the mercury expected to reach between 51F (11C) and 57F (14C) widely across the UK after a frosty start in parts.

However, not all the country will enjoy the pleasant weather today, with a cloudy outlook for Northern Ireland, western and southern Scotland – and 36 flood alerts or warnings still in place for England and Wales.

It comes after deputy chief medical officer for England Professor Jonathan Van-Tam yesterday urged Britons not to ‘relax’ as the UK heads into a glorious weekend, warning that ‘this is not a battle that we have won yet’.

Addressing a Downing Street press briefing, he warned the public ‘do not wreck this now’ as some areas of the UK are ‘burning quite hot’ in terms of coronavirus infections.

Pictured: Britons take an early dip in the sea at Branksome Beach, Dorset today ahead of a warn weekend across the UK 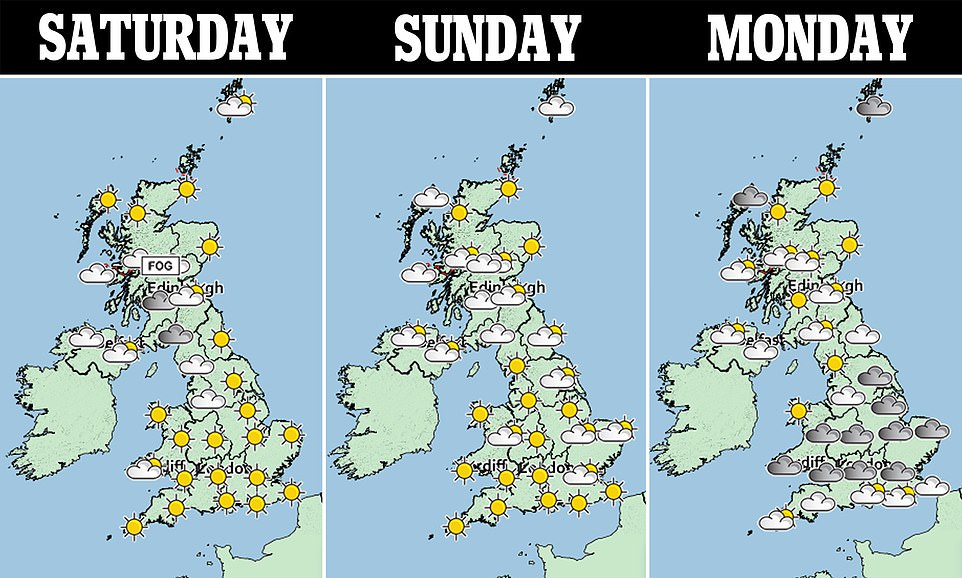 The South of England and East of Scotland will enjoy the best of the conditions with wall-to-wall sunshine expected today and Sunday, and highs of 57F (14C) forecast today in London and Aberdeenshire 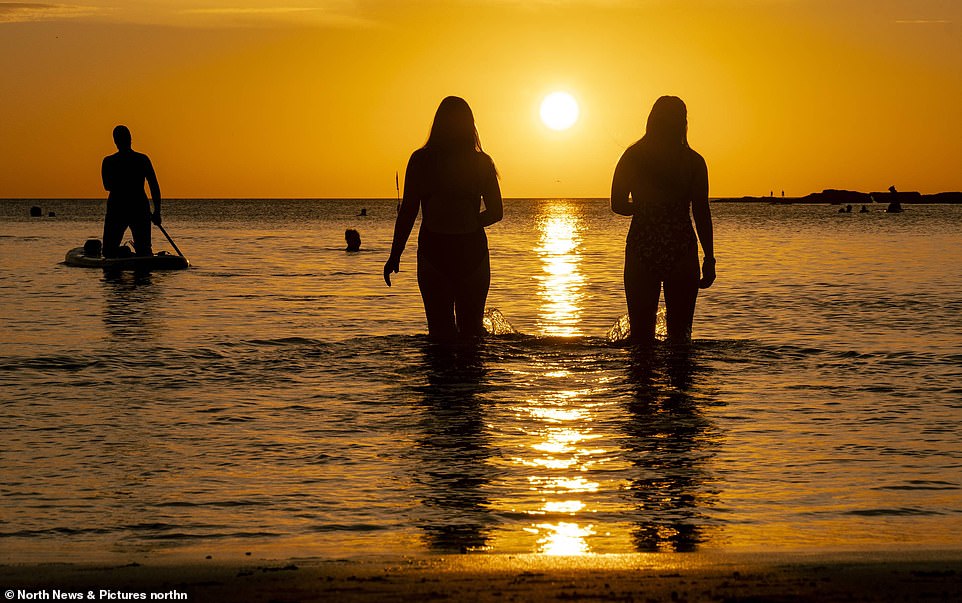 Pictured: Early morning swimmers enjoy the sunrise at Cullercoats Bay in North Tyneside this morning, heralding the start of a weekend of Spring sunshine 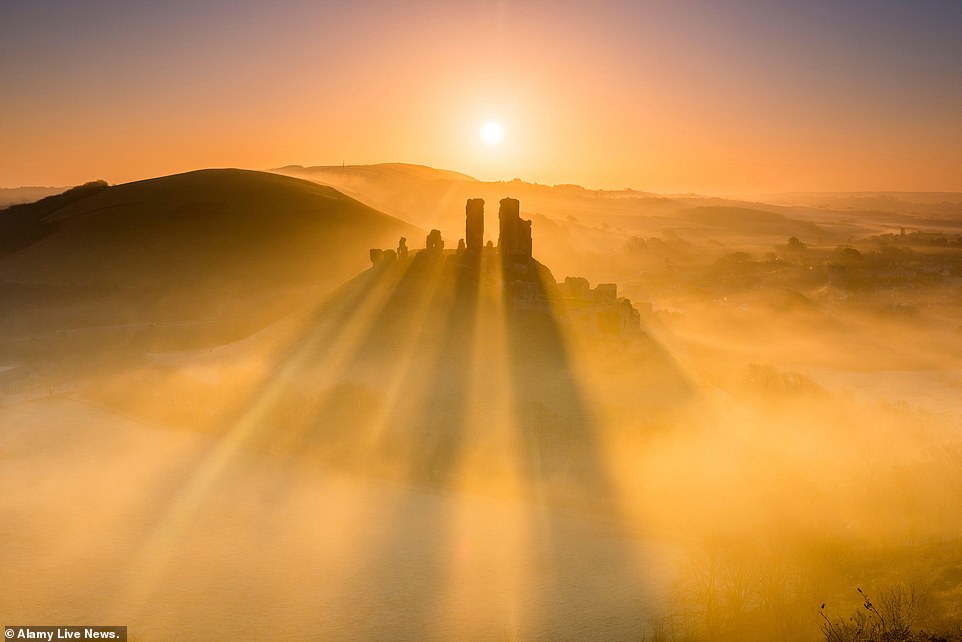 Pictured: A spectacular sunrise with the shadows of the ruined towers on the mist surrounding Corfe Castle in Dorset today

England and Wales has enjoyed a very mild week for the time of year with the warmth on a par with Malaga and Barcelona as Suffolk recorded 65.1F (18.4C) on Wednesday, which was even above the average maximum for May.

The change in conditions has been welcomed by Britons who have flocked to parks, after the Beast from the East  II brought heavy snow and sub-zero daytime temperatures to much of the UK at the start of this month.

Open spaces have been busy with people doing their daily exercise, which is still permitted during the lockdown – before one-plus-one social meetings outside are allowed from March 8 and the rule of six outdoors from March 29.

West Midlands Police said it was ‘lovely weather for a walk’ and thanked people in a wood for complying with the guidelines, while South Wales Police acknowledged it could be ‘tough’ to follow the rules in good weather.

Met Office forecaster Aidan McGivern said today will begin with ‘a few mist and fog patches’ for England and Wales before transforming into a ‘beautiful sunny day’, with cloudy patches expected south of Cumbria.

He said: ‘Temperatures reaching 11C to 14C, with warm spots in London and eastern Scotland. 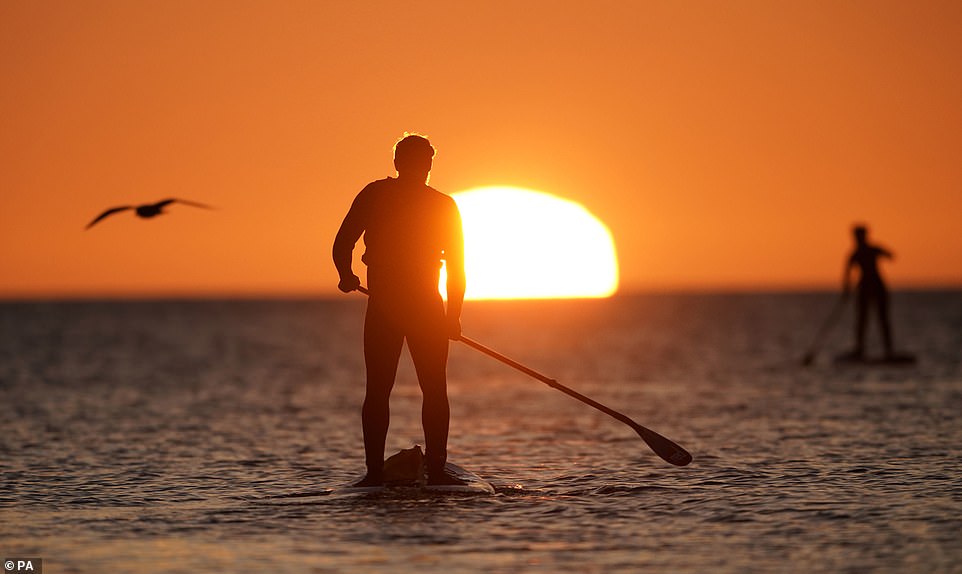 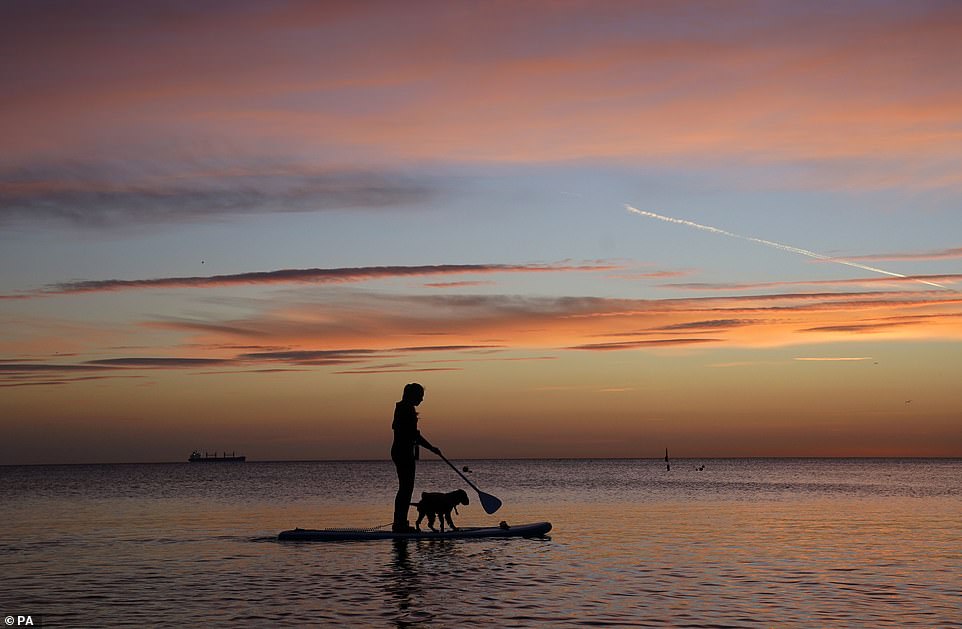 Pictured: Anna Heslop, 25, and her dog Merlin paddleboarding at sunrise in Cullercoats Bay, North Tyneside, on the North East coast of England 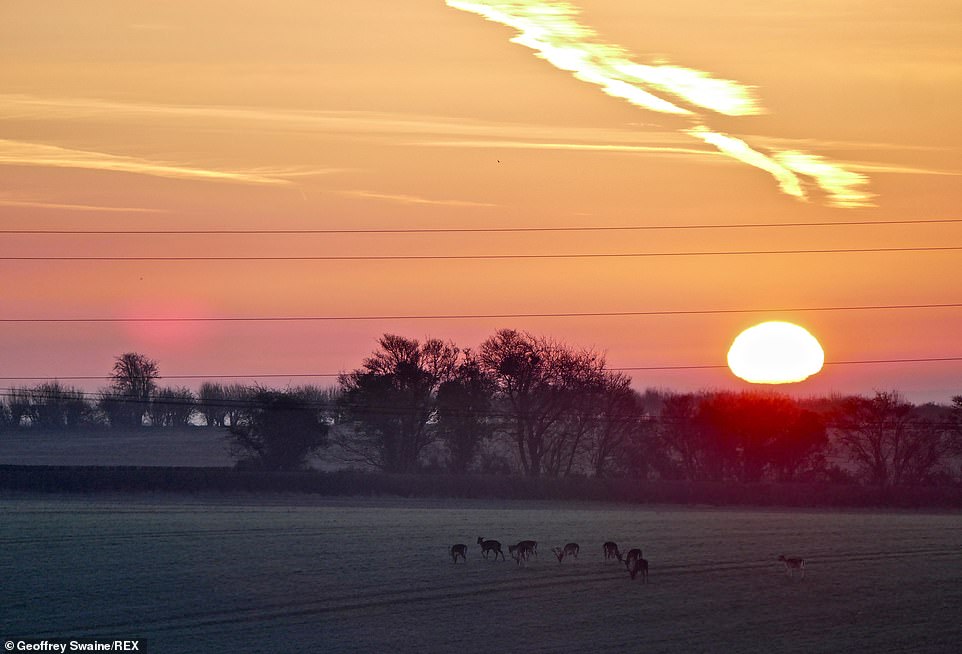 A herd of roaming deer are seen in fields in Playhatch, Oxfordshire ahead of a weekend of warm Spring weather 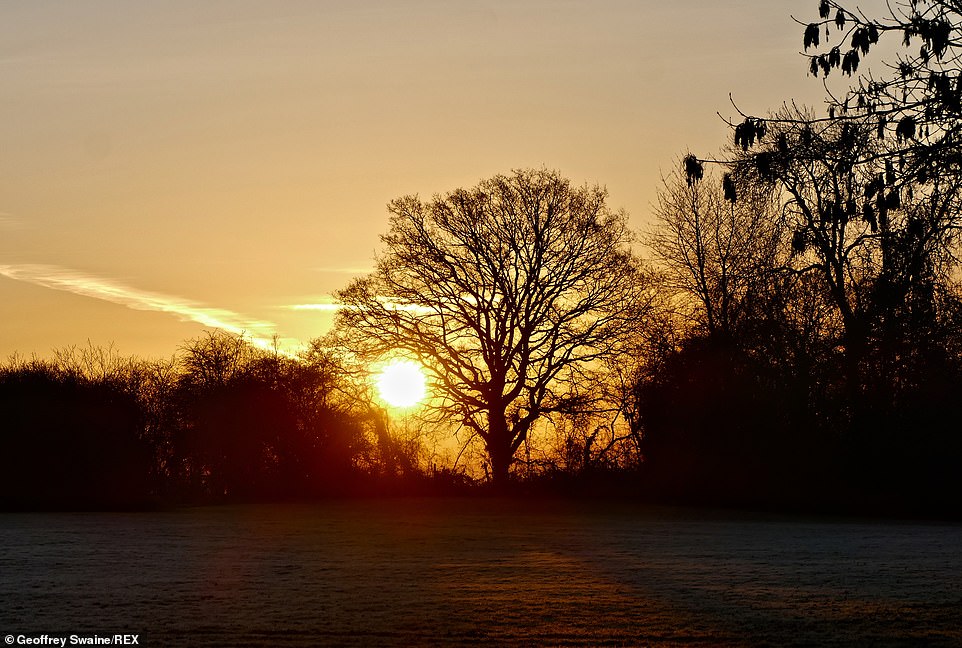 Those in Southampton and Norwich will also enjoy the best of Britain’s warmer Spring weather, with the mercury expected to reach between 51F (11C) and 57F (14C) widely across the UK after a frosty start in parts. Pictured: Playhatch, Oxfordshire 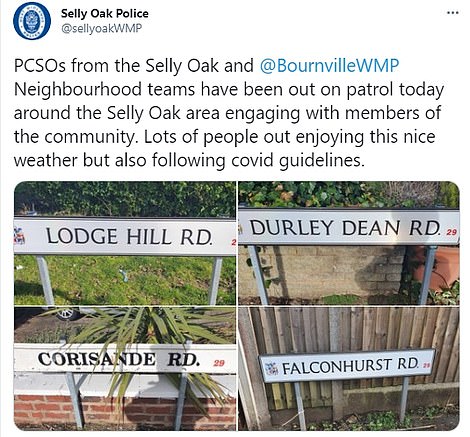 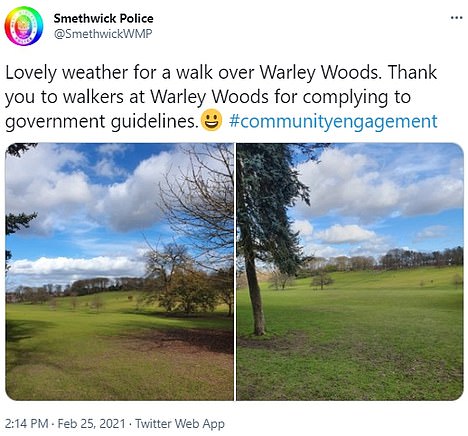 Police forces yesterday warned the public that they would be on patrol this weekend to ensure people were still abiding by the restrictions, with Sussex Police noting concerns over ‘complacency’ and saying on Twitter: ‘Don’t stop now’

‘Into Saturday night, the weather front trapped under an area of high pressure loses its identity but it is still an area of increased moisture and that will mean it will provide the ingredients for some fairly dense mist and fog patches through central parts of the UK overnight.

‘It will also keep things frost free where the low cloud lingers, but it is otherwise frosty in the south and across Scotland.’

The warm weather is expected to continue into Sunday, when temperatures will drop slightly to highs of 55F (13C) following a morning of widespread low cloud, mist and fog for those in northern England and southern Scotland.

‘However, by the afternoon most places will brighten up with long spells of sunshine for many and it’s going to feel pleasant with light winds and temperatures once again widely above average,’ Mr McGivern added. 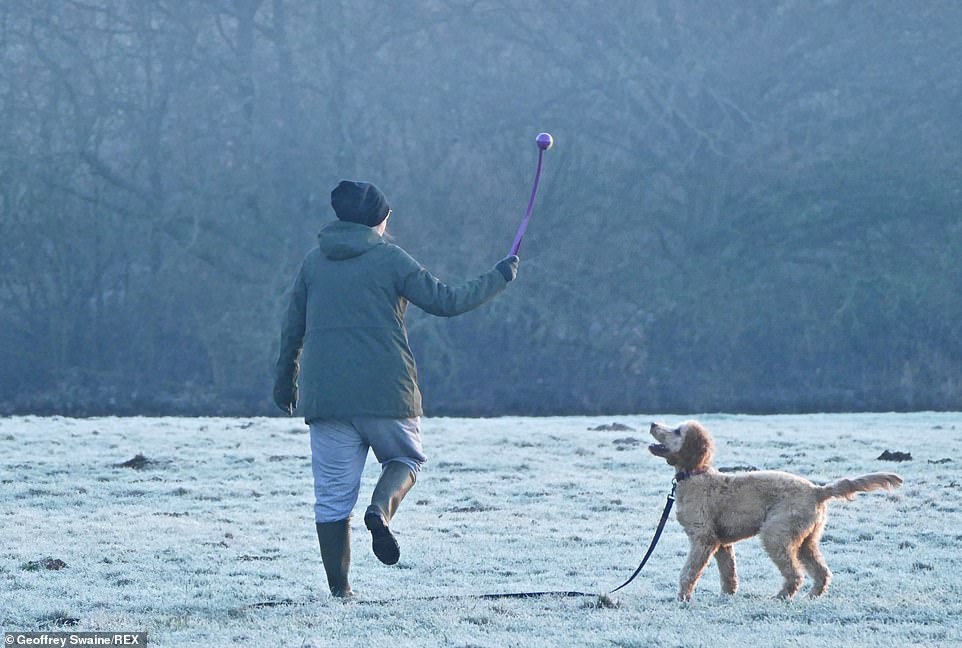 Pictured: Dog walkers brave the frost in Clayfield Copse, Berkshire today ahead of a weekend of warm weather 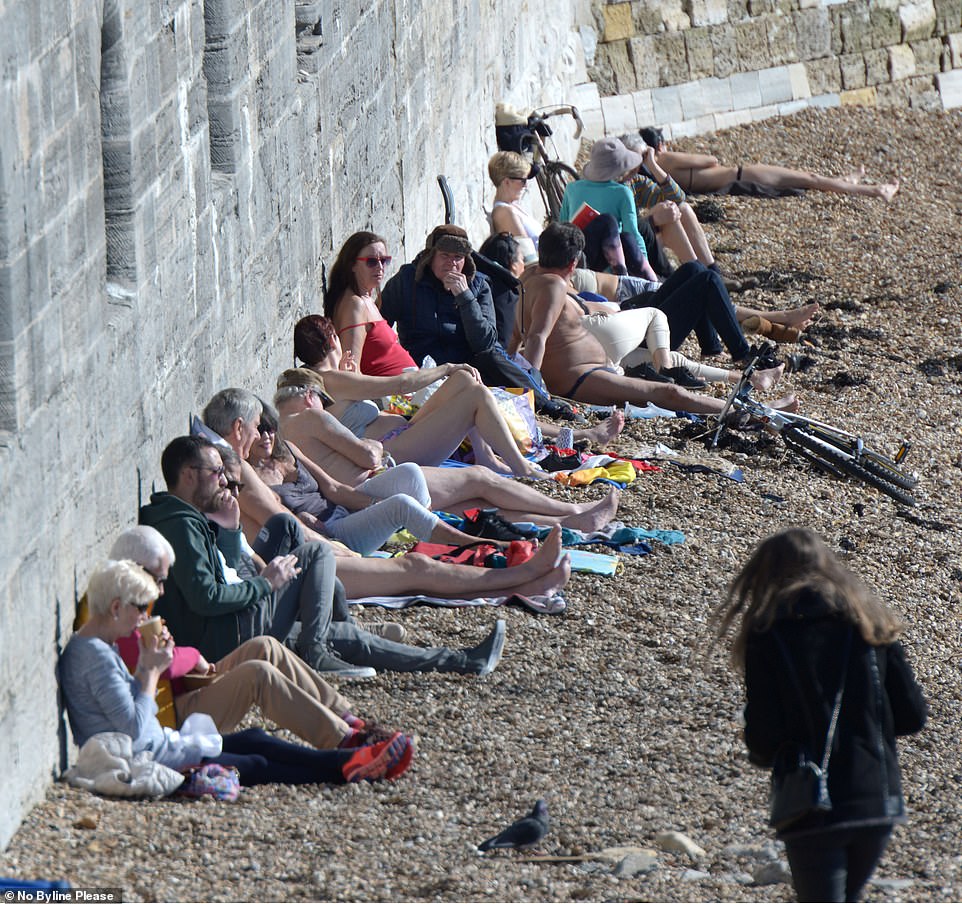 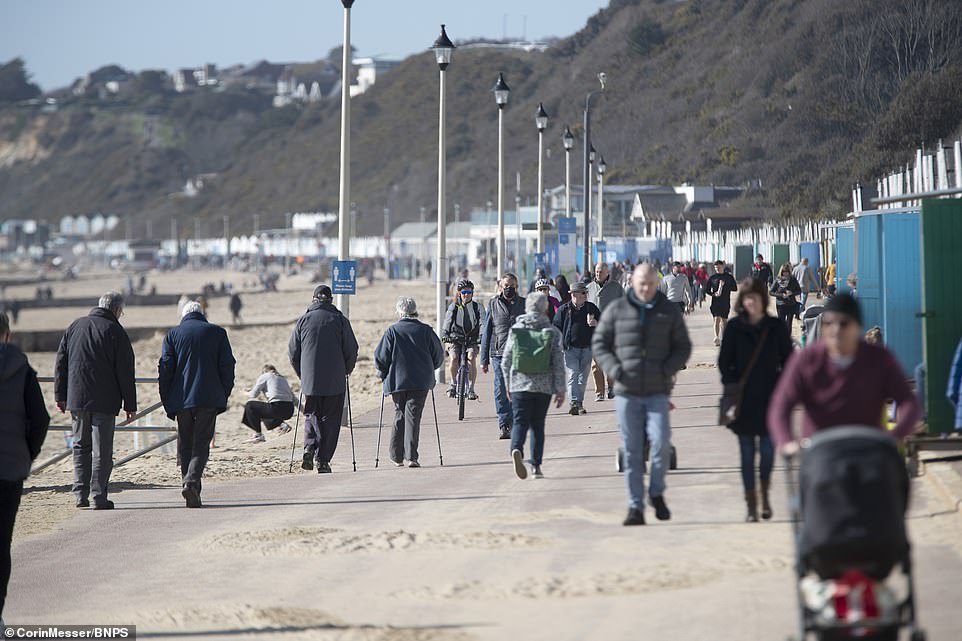 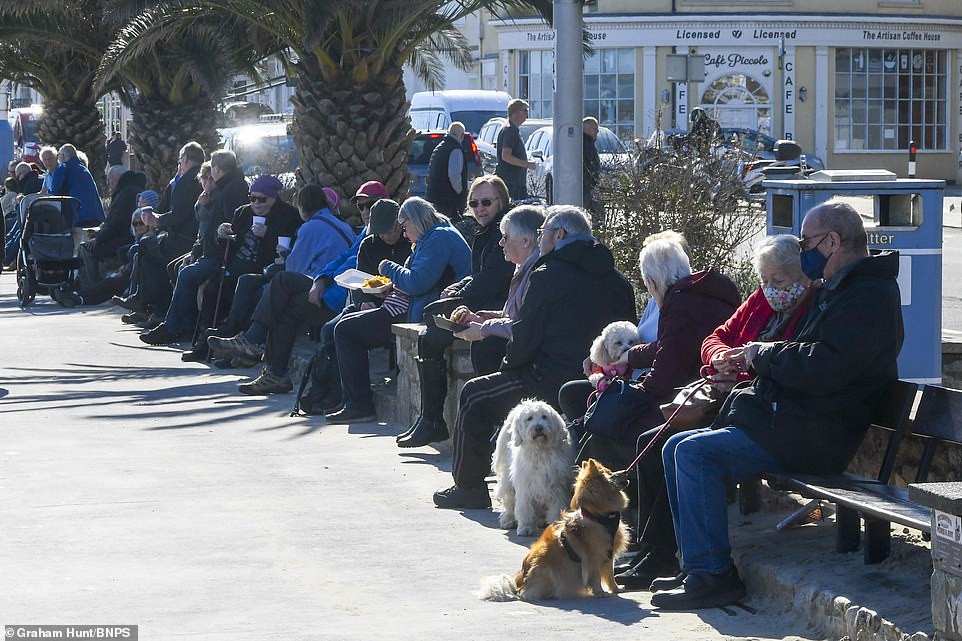 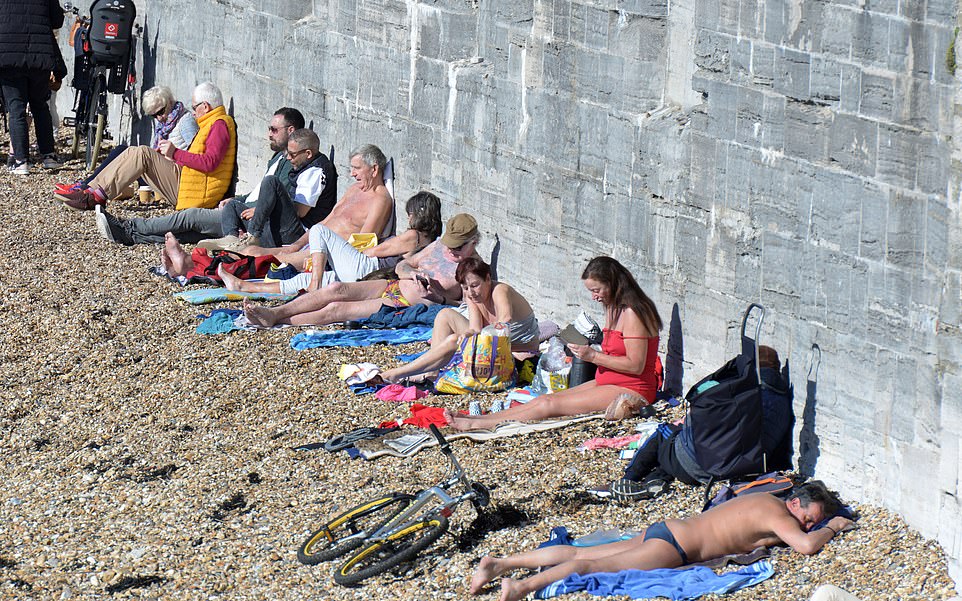 ‘I think 11C to 13C so perhaps a degree or so lower compared to Saturday.’

The warm, southerly airflow bringing the mild weather since the start of last week has also been responsible for dramatic, vivid red sunrises particularly in the East after blowing Saharan dust north from Africa.

The mild weather has seen colourful displays of snowdrops, crocuses and early daffodils. Guy Barter, of the Royal Horticultural Society, said people should enjoy the blooms while they can.

He said: ‘Now it’s turned so mild, the blooms are going to be over very fast. If people want to see the crocuses and early daffodils, they need to get out over the next 10 days or so.

‘With snowdrops, they are now on the cusp (of being over for the year) so you haven’t much time; you need to go and see them now.’

Mr Barter said the spring flowers have appeared at around the normal time, having been slowed by cold weather earlier this month.

But he added that it would be better for fruit trees if colder weather returns during March, to delay fruit flowers so they come out later in the spring when there is less likelihood of frosts.

He said: ‘We don’t want the warm weather to continue for too long – we need colder weather to return. Otherwise late frosts risk harming the blossom, leading to less fruit.’