Heart attack deaths soared by a fifth during the pandemic, according to a major review that warns of the huge ‘global collateral damage’ of Covid and lockdowns.

An analysis of nearly 200 studies by researchers from Leeds University found deaths among people hospitalised due to severe heart problems jumped 17 per cent in two years.

Patients also waited for more than an hour longer than usual for cardiac and heart attack callouts between December 2019 to December 2021. And the number of heart operations carried out globally fell by 34 per cent.

Previous research in the UK has shown that many people were too scared to go to hospitals in case they caught the virus or were a burden on health services during the early stages of the pandemic.

Tens of millions of GP appointments and operation were scrapped or postponed, which may have led to people’s conditions worsening, and staff were redeployed to look after those infected with the virus.

Dr Ramesh Nadarajah, a cardiologist who led the review, said: ‘Heart disease is the number one killer in most countries – and the analysis shows that during the pandemic, people across the world did not receive the cardiac care they should have received.

‘That will have ramifications. The longer people wait for treatment for a heart attack, the greater the damage to their heart muscle, causing complications that can be fatal or cause chronic ill health.’

The researchers also found cases of heart attack were down by 34 per cent and heart attack hospitalisations were down by a third. They said this was down to more cases going undetected, rather than fewer heart problems.

Separate data from the British Heart Foundation (BHF) shows there were more than 300,000 people waiting for cardiac treatment in England by the end of March — a figure that has been rising since for nearly two years.

Heart disease is one of the UK’s top causes of death and is behind a quarter of fatalities every year – more than 160,000. There are around 7.6million people living with heart and circulatory disease across Britain. 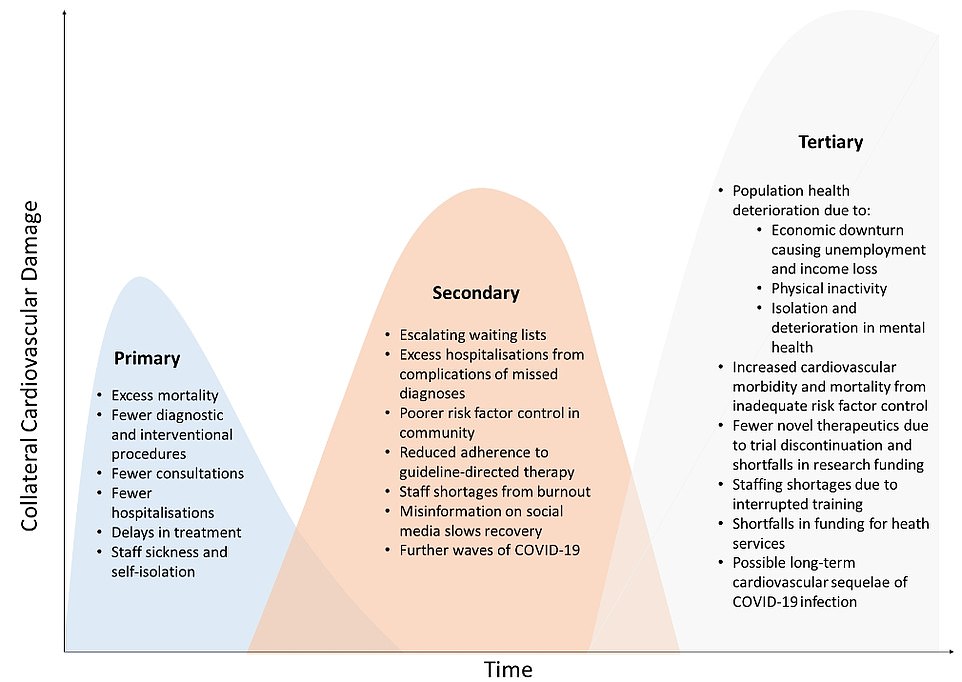 WHAT DID THE REVIEW FIND?

A team from Leeds University, who analysed nearly 200 studies on how the pandemic impacted cardiovascular services, found deaths among people hospitalised due to a major heart problem soared 17 per cent worldwide.

UK studies show that the pandemic caused a ‘displacement of death’ effect, with six per cent more people than expected dying at home from heart problems.

The researchers also found heart attack hospitalisations fell by a third, while patients were forced to wait 69 minutes more for medical treatment compared to pre-pandemic waits.

Patients were forced to wait 69 minutes longer to receive medical assistance for a serious heart attack after their symptoms began.

Some 22 per cent fewer people were hospitalised due to a serious heart attack.

A third fewer people were  admitted to hospital with a less severe heart attack.

The number of heart operations globally fell by 34 per cent.

And the number of electronic implantable devices to treat abnormal heart rhythms, such as pacemakers, inserted over the pandemic was 49 per cent lower than pre-Covid levels, the researchers found.

The findings, which the researchers describe as the ‘first global assessment of the way cardiovascular services coped during the pandemic’, show 22 per cent fewer people were hospitalised due to a serious heart attack — when one of the arteries pumping blood around the body is completely blocked.

And the number of people admitted to hospital with a less severe heart attack — when the artery is only partially blocked — fell by a third, according to the results published in the European Heart Journal.

The researchers warned the drop-off was ‘not due to fewer heart attacks but fewer people attending hospital for treatment’.

Heart attack and heart failure sufferers ‘stayed away or could not get admitted to hospital’ over this period, as health systems around the world were under ‘extreme pressure and people were fearful of catching Covid’, the Leeds team said.

The biggest rise in heart attack deaths were mainly seen in  low and middle income countries.

But in the UK they were still up by seven per cent compared to pre-pandemic levels.

On top of the hospitalisation figures, patients were also facing longer waits to be treated for a heart attack.

The researchers warned that the chance of someone surviving a major heart attack ‘depends on timely and appropriate treatment’.

Meanwhile, the ‘gold-standard’ operation for heart attack patients fell by 40 per cent in poorer countries and 24 per cent in wealthier nations.

Coronary angioplasties — used as an emergency treatment after a heart attack — involves inserting a short wire-mesh tube, called a stent, into the artery permanently to allow blood to flow more freely.

The researchers said these patients were often treated with clot-busting drugs, such as alteplase and streptokinase. This was particularly the case in low and middle income countries, where the use of these drugs nearly doubled. 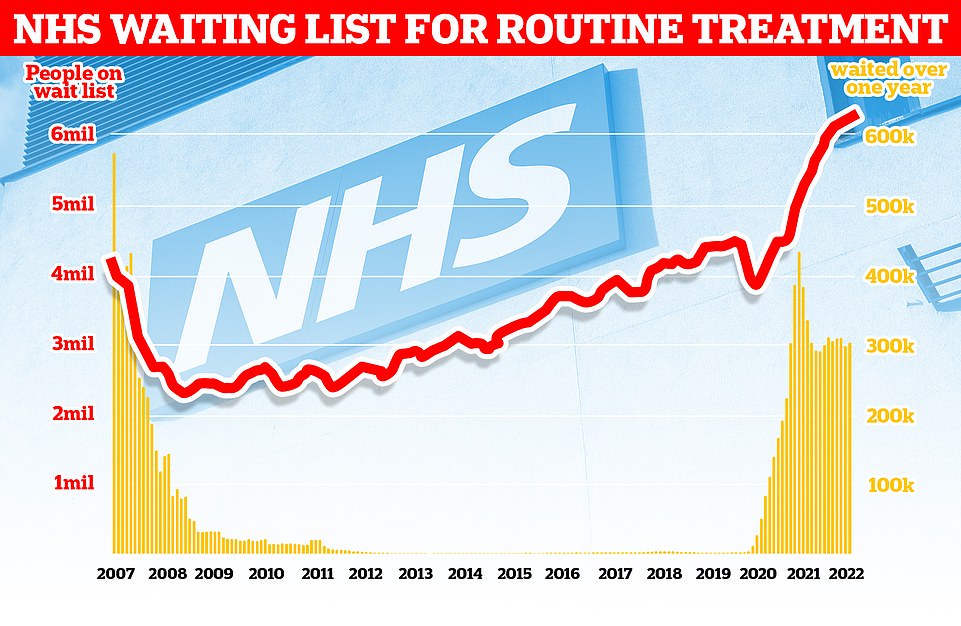 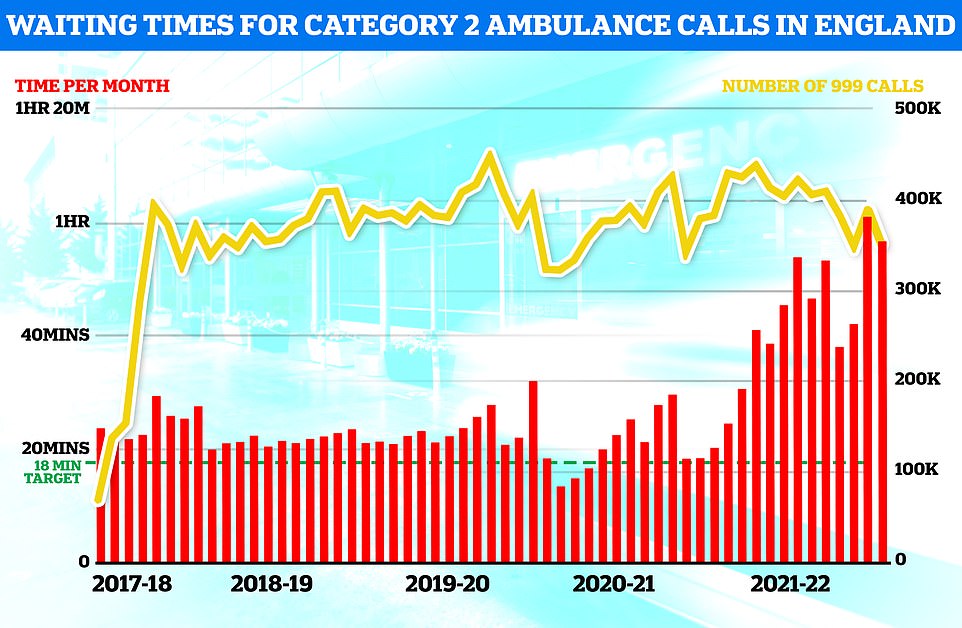 And the number of electronic implantable devices to treat abnormal heart rhythms, such as pacemakers, inserted over the pandemic was 49 per cent lower than pre-Covid levels, the researchers found.

The researchers said their findings show a ‘substantial global decline’ in hospitalisations among cardiovascular disease sufferers, leading to a rise in people dying at home from heart conditions.

The hit to cardiovascular services was seen worldwide but was ‘exacerbated in low to middle income countries’, the researchers said.

And they believe their findings ‘underplay the true extent’ of Covid’s impact on heart services due to the ‘sparse’ data available for poorer countries.

The researchers said: ‘Collateral cardiovascular damage from missed diagnoses and delayed treatments will continue to accrue unless mitigation strategies are speedily implemented.

‘The deferral of interventional procedures, especially for structural heart disease, leaves many patients at high risk of adverse outcomes.’

Professor Chris Gale, consultant cardiologist and senior author on the study, said: ‘The repercussions of the Covid pandemic on cardiovascular care and outcomes will be with us for a long while yet.

‘There is little doubt that there will continue to be deaths and illness that would not have otherwise occurred. Urgent action is needed to address the burden of cardiovascular disease left in the wake of the pandemic.’

The BHF says here is a need for an urgent plan to help cardiac services in England deal with the increasing number of people who now need treatment, with 309,796 waiting for heart services by March.

Dr Sonya Babu-Narayan, associate medical director at the BHF and a consultant cardiologist, said: ‘We need a comprehensive and specific cardiovascular plan to address the burden of cardiovascular care including the backlog — and provide immediate and long-term solutions to our cardiovascular workforce shortage.

‘Without this we will continue to see heart attacks, lasting heart damage, or even premature deaths that could have been avoided.’

It comes after official NHS England figures show the patient backlog has skyrocketed to 6.4million, with one in nine people waiting for routine treatment.

And ambulances in England took an average of 51 minutes and 22 seconds to respond to heart attack calls in March. This is compared to a 40 minute response time set out in NHS guidelines.