By Emma Dunkley And Lucy White, Financial Mail On Sunday

Sir Antonio Horta-Osorio could be stripped of more than £1million of his bonus and share incentives over the notorious HBOS Reading fraud.

The former Lloyds Bank boss has had part of his package put on ice due to the soaring compensation bill for victims of one of the UK’s biggest financial scandals in recent years.

The bank’s remuneration committee is deciding whether to punish the Portuguese banker for his role in the episode by clawing back a large chunk of his pay packet.

Under the microscope: The bank’s remuneration committee is deciding whether to punish Sir Antonio Horta-Osorio for his role in the episode

Pressure is growing on the committee to conclude their deliberations swiftly.

Victims’ lives were ruined by the affair and many are furious over the compensation process which has been bedevilled by numerous delays.

Hundreds of business owners are still out of pocket 15 years after the event.

The Mail on Sunday also understands that a review into the scandal by Dame Linda Dobbs, which began in 2017, has been delayed yet again.

Although the fraud happened before Horta-Osorio joined the bank, his handling of the aftermath has been criticised.

Lloyds was forced to set aside another £790million for redress at its annual results in February, taking the total to £1.2billion.

Horta-Osorio, 58, was paid nearly £60million in a decade at the bank during which he won plaudits for repairing its balance sheet after a taxpayer bailout during the financial crisis. He was knighted in February.

He left Lloyds last year and joined Credit Suisse, but was forced to step down as chairman for flouting Covid-19 lockdown rules to attend Wimbledon.

Lloyds said that, pending ‘further consideration, variable remuneration awards and vestings for 2022 will be frozen for former executive directors’. 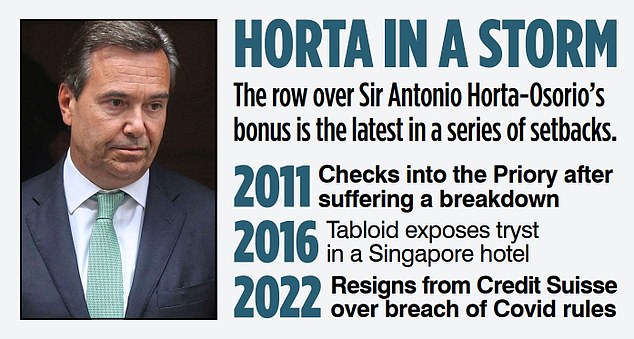 George Culmer, the bank’s former finance chief and now chairman of insurer Aviva, has also had part of his package frozen, as has former chief operating officer Juan Colombas.

Senior politicians and union leaders are demanding that the committee is prompt in taking an axe to Horta-Osorio’s pay.

Tory MP Kevin Hollinrake, who chairs the All Party Parliamentary Group on Fair Business Banking, said: ‘He should’ve been sacked – not just for the fraud but the delayed compensation scheme. He should not have his bonus. He should not even have had his salary for a few years.’

The HBOS Reading episode has been a long-lasting stain on Lloyds’ reputation. In January 2017, six people including two former employees of HBOS – which had been rescued by Lloyds in the financial crisis – were jailed for up to 12 years.

They were convicted for conspiracy to corrupt, fraudulent trading and money laundering between 2003 and 2007.

Threats and extortion were used to take control of customers’ small businesses and to pocket fees and loans granted in their name.

The six – including Michael Bancroft, David Mills and Lynden Scourfield – were jailed after they were found to have stolen £1billion to fund sex parties, yachts and luxury holidays.

The independent investigation by Dame Linda Dobbs, a former High Court judge, is facing further hold-ups. Her team has ballooned from a handful of barristers to about 50.

One source ‘conservatively’ estimated it is costing Lloyds £16million per year.

Publication of Dame Linda’s report has been delayed four times. Interviews of key witnesses are set to run on into the summer.

Hollinrake added: ‘If Horta-Osorio is named in the report he should be stripped of his knighthood and the Financial Conduct Authority should remove the possibility of him working for a financial institution ever again.’

Mark Brown, general secretary of trade union Affinity, said Horta-Osorio should lose his share awards and his knighthood if the report concludes that issues relating to HBOS Reading were not properly investigated.

In 2019, Lloyds took action to curb Horta-Osorio’s pay, leading him to give up a bonus worth about £1 million. Colombas missed out on his own payout.

A spokesman for Horta-Osorio said: ‘These procedures are not new, they are not specific to Mr Horta-Osorio – although he supports them – and they are yet to be completed.’