Liverpool mayor Joe Anderson today confirmed his brother has died a day after being admitted to intensive care with coronavirus.

He tweeted: ‘Despite the efforts of all the staff at Liverpool Hospital ICU my brother sadly died at 10.45 last night.

‘We want to thank the dedicated staff risking their lives for us. Thank you all for your messages of love and support. Let’s stick together and support each other and win this battle.’

It comes just five weeks after the Labour mayor’s other brother Henry died of cancer.

Liverpool has one of the highest coronavirus rates in the country and is one of only two regions in the highest alert level Tier 3. 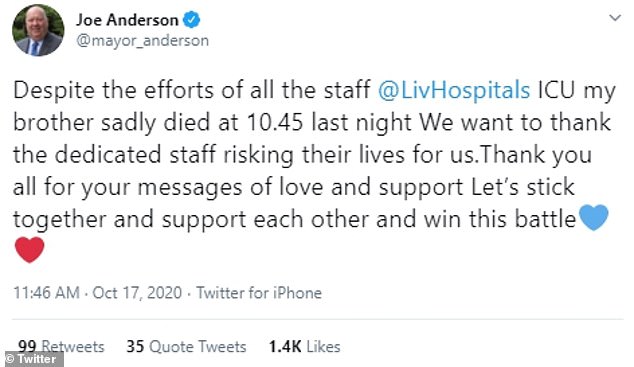 Last night Mr Anderson said that his sister-in-law, who works as a nurse, had been in touch to say that her husband, his eldest brother, had been struck down with Covid-19 and was in intensive care ‘in a very serious condition’.

After breaking the tragic news of his brother’s death, people rallied around Mr Anderson.

Everton FC star Yannick Bolasie tweeted: ‘Condolences to you and your family.’

Earlier on Friday, Mayor Joe Anderson joined Liverpool City Region leaders in branding the tier system of coronavirus regulations a ‘shambles’, following the announcement that gyms in Lancashire can stay open under the strictest measures.

Gyms and leisure centres in Liverpool, Wirral, St Helens, Sefton, Knowsley and Halton were ordered to close from Wednesday as the area was placed in Tier 3.

Draconian Tier Three regulations have seen restaurants close at 10pm, pubs and bars being ordered to close and households have been banned from mixing indoors or outdoors.

Locals are also advised not to travel to and from high risk areas and overnight stays outside of ‘high’ risk areas are banned.