Liverpool’s intensive care wards are at 95% capacity and medics expect patient numbers to surge past those seen in the pandemic’s first wave ‘in ten days’, councillor warns

Liverpool’s intensive care wards are running at 95 per cent capacity as patient numbers in the city are expected to surge past the highest seen during the pandemic’s first wave ‘in the next 10 days,’ a councillor has warned.

During the first peak of the coronavirus pandemic, Liverpool saw 400 patients hospitalised as they fought the disease.

Councillor Paul Brant, cabinet member for adult health and social care at Liverpool City Council, said there were around 277 confirmed cases currently in hospital -leaving its intensive care units running at around 95 per cent of capacity.

Covid-19 patients are filling up beds at Royal Liverpool University Hospital, and other medical sites across the city, with local health bosses predicting the city could have more than 400 in-patients with coronavirus within the next 10 days

Rising cases over the coming days could see other appointments and procedures cancelled to ensure Covid patients are given priority, as a health boss warned staff they were facing a ‘critical point’.

Around half of the intensive care beds across the Liverpool University Hospitals NHS Foundation Trust are currently occupied by those being treated for the virus.

Mr Brant said: ‘We’re expecting to see rates of inpatients continue to rise and probably surpass the levels in March or April within the next seven to 10 days. 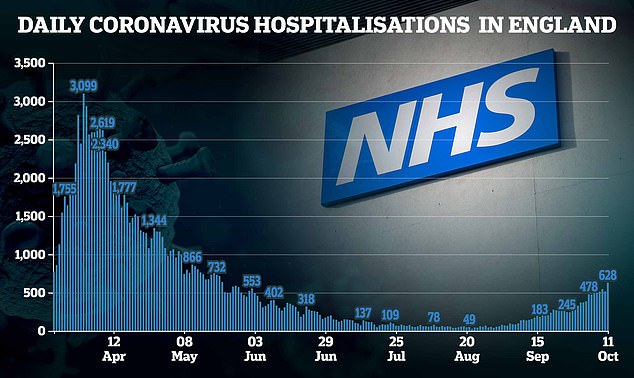 Hospitalisations across the country have been rising since the end of August, yesterday reaching levels higher than the start of June

‘There were 277 inpatients with Covid diagnosis yesterday, about 96 or so are awaiting tests. I think the previous peak was about 400 or so.’

He added: ‘What will happen is they will stop the elective surgery, stop diagnostic procedures and stop screening services in order to free up beds that would otherwise be used for that activity, to ensure that any sort of surge capacity in relation to Covid is accommodated.’

As there is not a temporary Nightingale hospital in the area, Mr Brant said wards in the half-built new Royal Liverpool Hospital were utilised as overfill capacity for patients during the first wave.

He said the trust was scaling back planned procedures, adding it was ‘taking a phased approach to reducing our elective programme, while exploring options with other providers to maintain some of this work in alternative locations’.

He added: ‘We will continue to prioritise surgery based on clinical need, with a view to maintaining urgent and cancer surgery where possible.

‘We will continue to maintain access to outpatient appointments wherever possible, and maintain diagnostic activity.’

Liverpool is one of a host of cities to be placed under Tier 3 lockdown laws, sparking outrage among local businesses.

The Empored FIT gym in Wirral declared it was planning to ignore new laws and stay open. 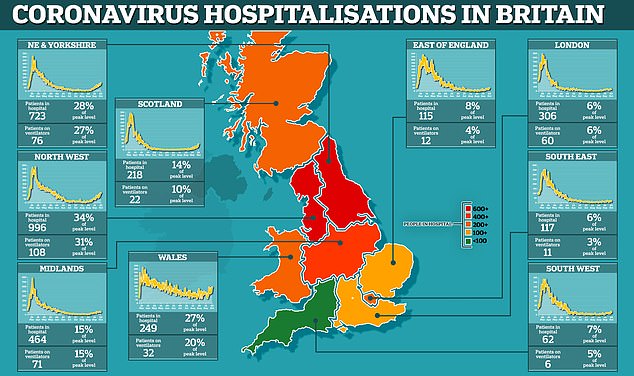 Chris Ellerby-Hemmings, one of the owners, told The Times around 40 Merseyside gyms were planning to do the same.

He said: ‘Obviously there might be some enforcement that happens, maybe the council will come, and the police will come,

‘We would have a discussion and explain that we’re doing this — to make a stand — and ask the council leaders to give us evidence to prove why gyms should be closed.’

Fitness chain Pure Gym has seven gyms in the area and has warned it may take legal action of the Government-enforce closure.