There were 12 minutes to go when Mo Salah ran on to the ball that had dropped out of the melee of bodies competing for it at a corner. He advanced on it without breaking stride and smashed it past Vicente Guaita in the Crystal Palace goal to put Liverpool 2-0 up. His landmark strike, his 100th Premier League goal, had come at Elland Road last week, but Salah celebrated number 101 with even more gusto.

Maybe there was another reason. This was an emphatic victory for Liverpool and even if they had their scares early in the game, it was a victory that suggested that, after all the adversity of last season, they will be right in the thick of the title race again this season. Almost for the first time since they won the title, they looked like the Liverpool of old again in this 3-0 victory. 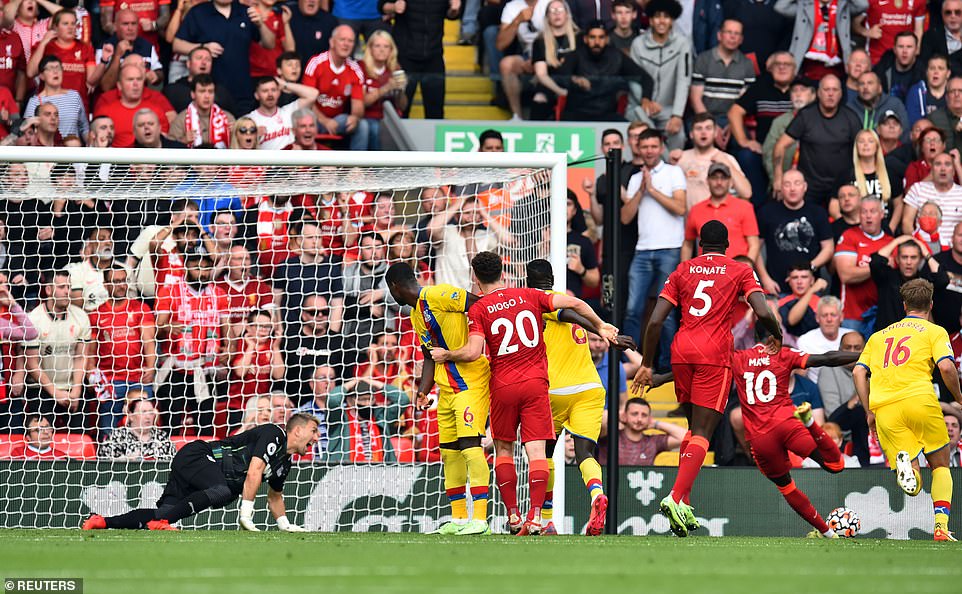 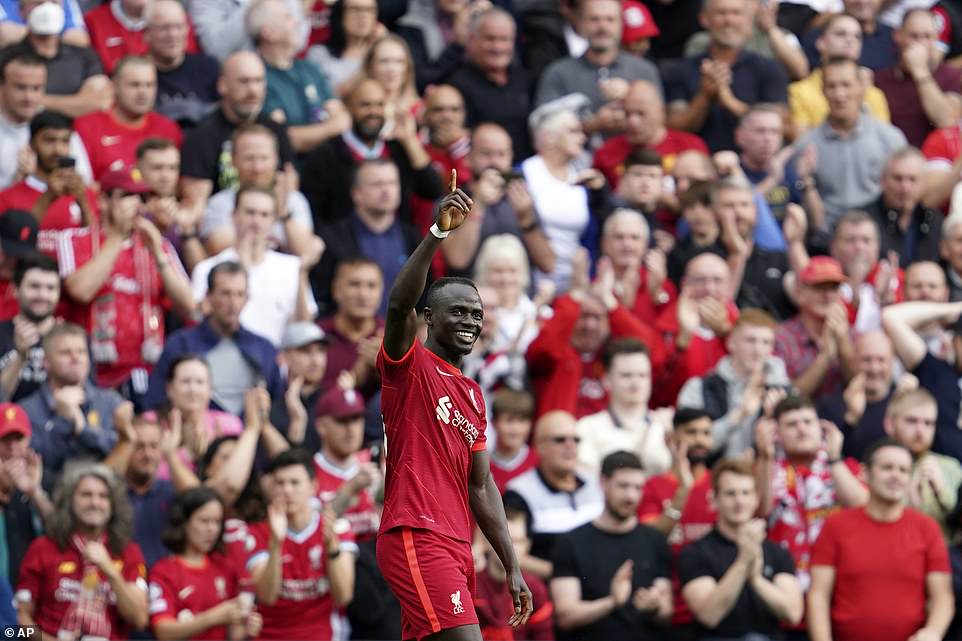 Mane celebrated by pointing to the air, and his goal helped spark a result that saw the hosts move into top spot temporarily

They had their leaders back. And they look imperious again. Virgil van Dijk was majestic at the heart of defence. Unflappable, intelligent with the ball, a beautiful reader of the game, he set the tone and the pace of the game, just like he always used to before that horrible injury he sustained at Goodison Park. Alongside him, new signing Ibrahima Konate played as if to the manor born.

Jordan Henderson was, of course, his usual inspirational mix of relentless directing, penetrating passing and angry energy. Thiago Alcantara dictated the tempo in midfield until he was forced off with an injury midway through the second half and up front, Salah was mesmerising. On days like this, it feels as if he is untouchable. Short of the crowd singing ‘Jurgen, Jurgen sign him up,’ it was the perfect message to those who control the purse-strings.

Altogether, it felt like a heady mix. There was a huge cheer from the departing Anfield faithful when the scoreless result from the Etihad Stadium was read out after the whistle. Manchester City and Chelsea may have been anointed as the teams to beat this season but this was the kind of performance to remind everyone that Liverpool should not be discounted quite so glibly. 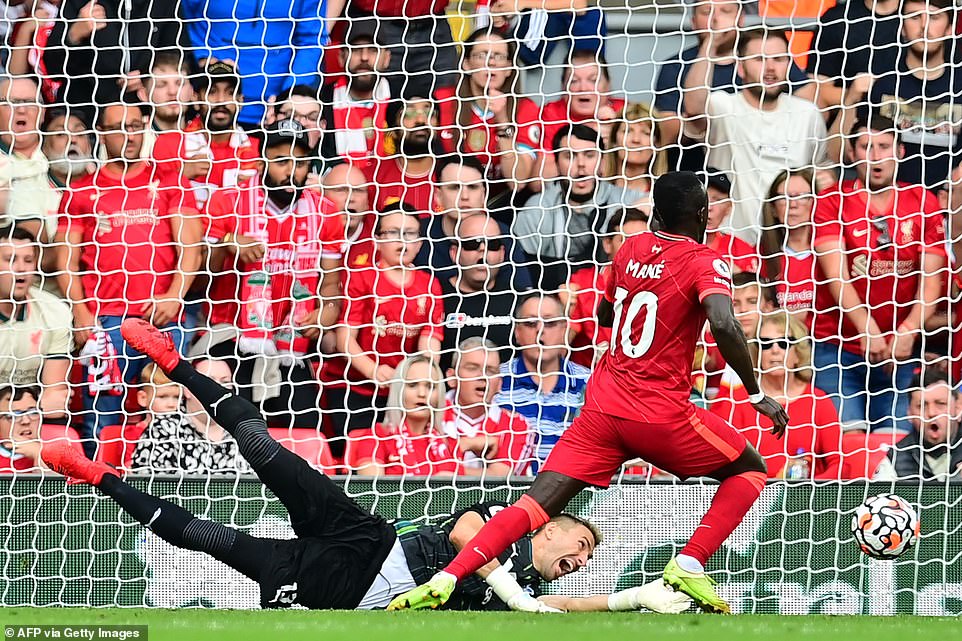 Vicente Guaita parried away Mohamed Salah’s header from a corner, but Mane was positioned perfectly to then sweep home 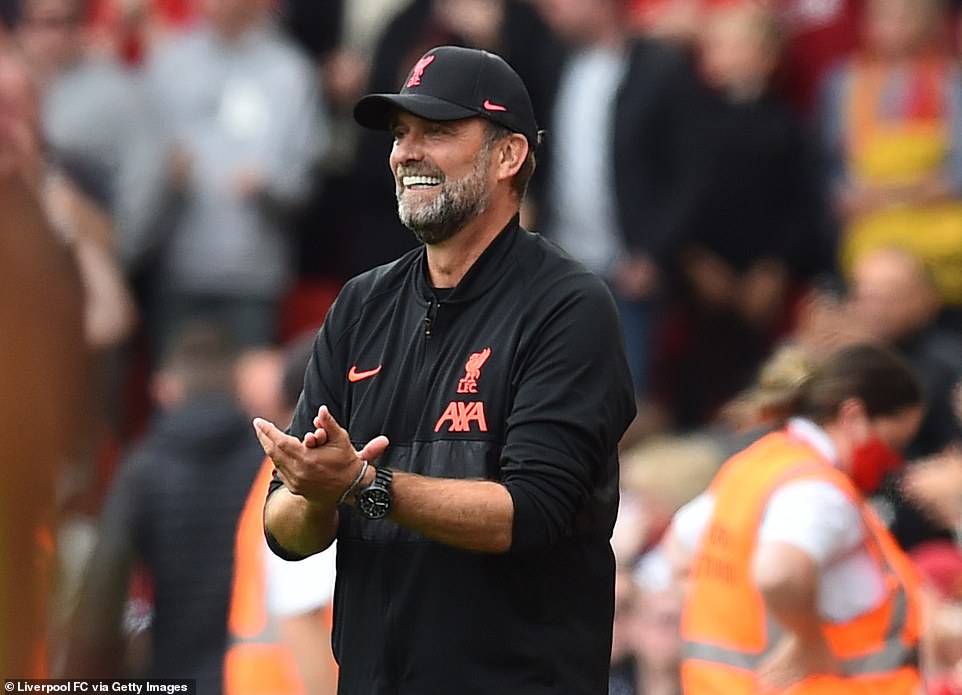 Jurgen Klopp applauded from the touchline, with Mane’s goal sending his team into the half-time interval with a narrow lead 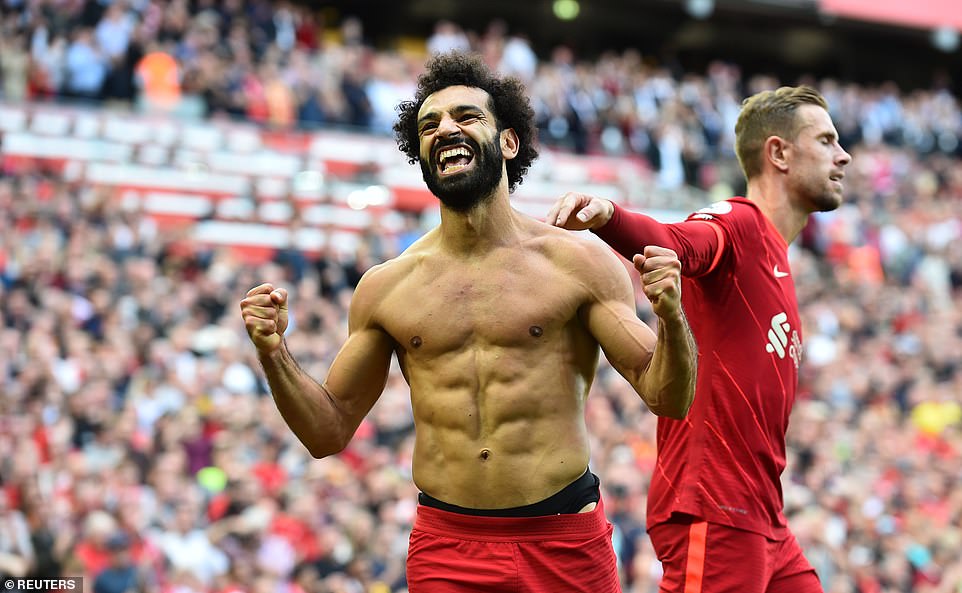 Salah then doubled Liverpool’s lead to settle the victory on 78 minutes, after again beating stopper Guaita from close range 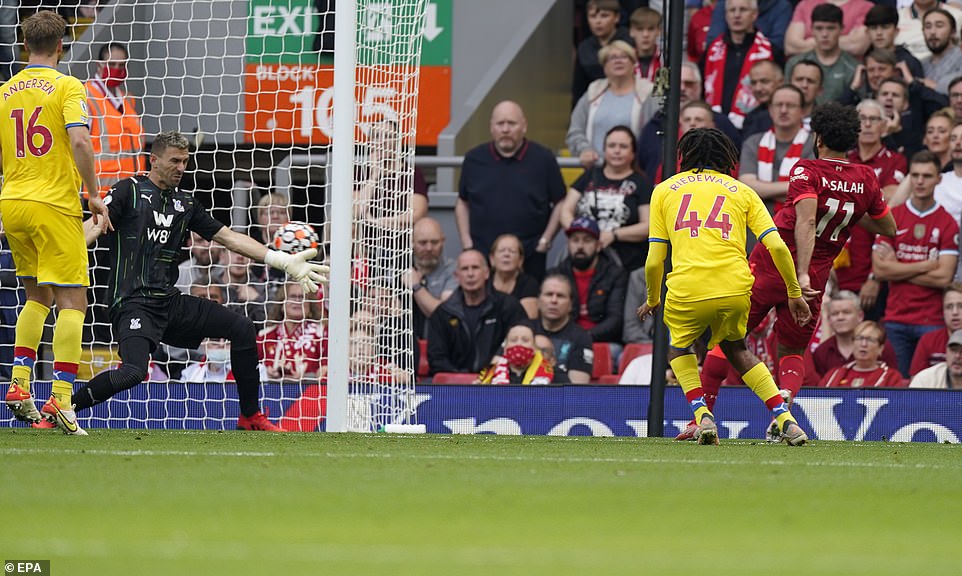 Forward Salah (right) made no mistake when applying the finish touch, slamming into the corner after a corner sparked chaos 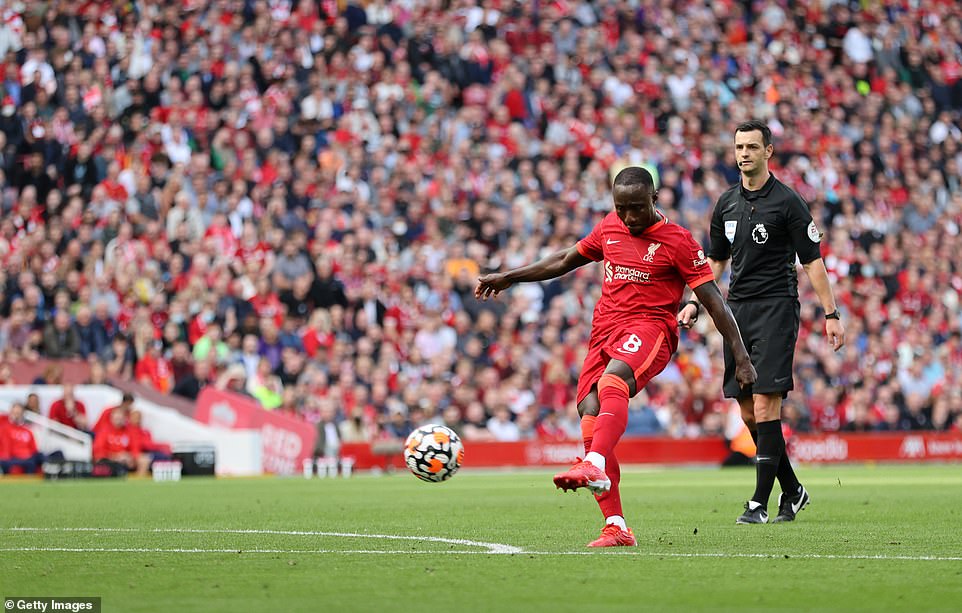 Substitute Naby Keita cracked home Liverpool’s third goal of the afternoon, as his thumping volley found the back of the net

The game started with rather a rude awakening for Liverpool debutant Konate, who was making his first appearance for the club after his summer move from RB Leipzig. Konate was given an early introduction to the hurly-burly of the Premier League when a ball looped up over him after 90 seconds and fell into the path of Wilfried Zaha.

Zaha was on the chance in a flash and even though he could not control it, it bounced up off his body and began to fall in a lazy arc towards the corner of the net. Alisson scrambled backwards and palmed the ball on to the post and out for a corner. Christian Benteke hit the post from the corner with a header, too, but the flag soon went up for offside. Finally, Konate could take a breath.

Palace’s attacking contributions for the rest of the first half were minimal. The limit of their ambition was containment and they threw everything they could at trying to keep Liverpool out. Time and again, the ball cannoned around the Palace area as Liverpool tried to force it in but Palace defended resolutely and when they lapsed, Liverpool were profligate.

Diogo Jota ought to have put the home side ahead in the ninth minute when he wriggled away from his marker inside the box but fired over from a tight angle about six yards out. Guaita made a smart save from Henderson when the Liverpool captain ran on to a deep cross from Mane at the back post and as the half wore on, Liverpool’s frustration grew. 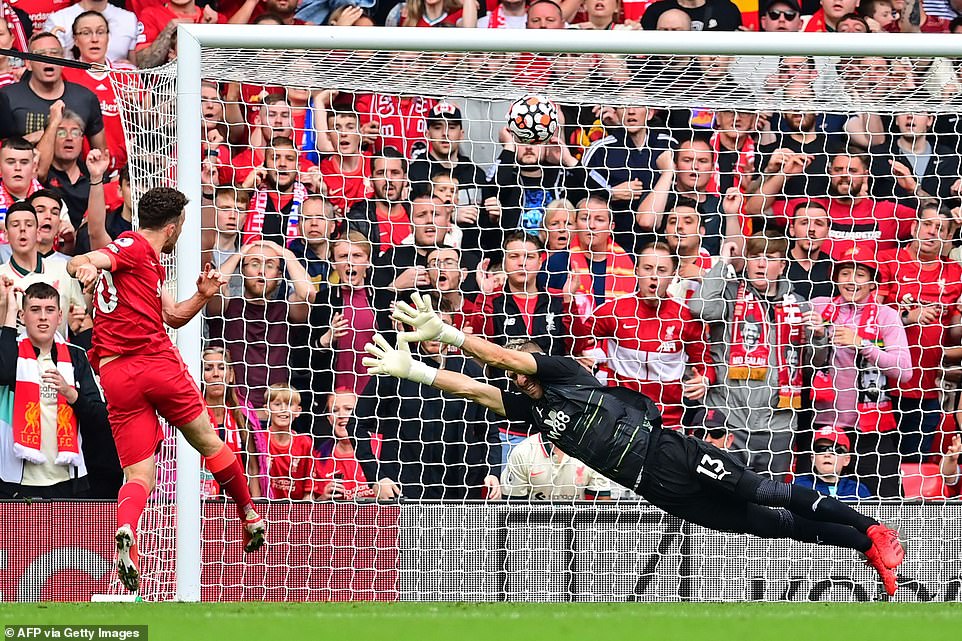 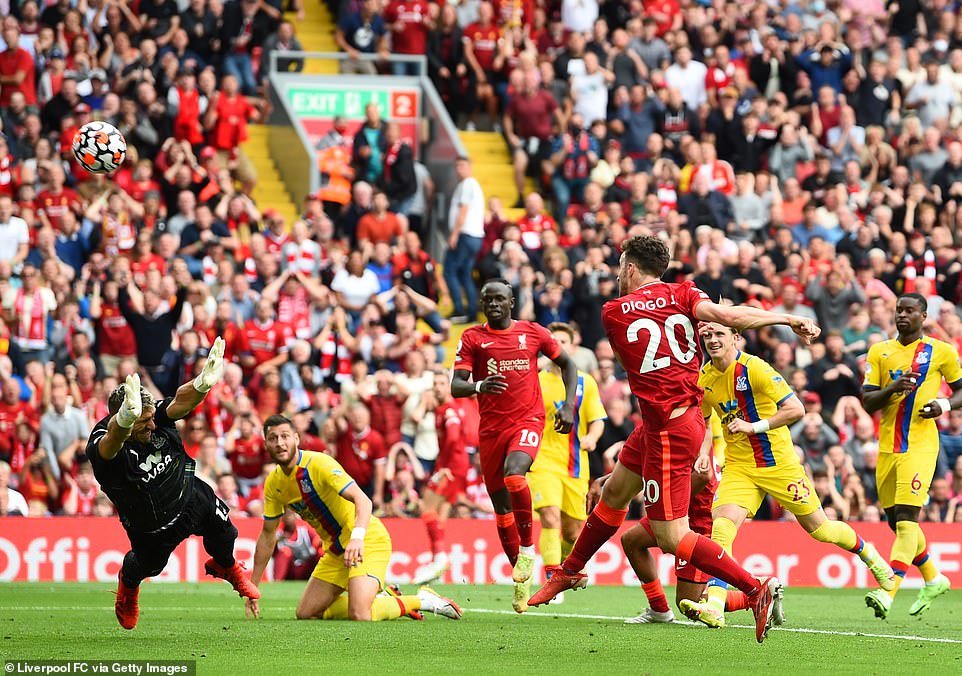 With just Guaita to beat at the far post, Jota made contact with the ball but, leaning backwards, sent his effort over the top 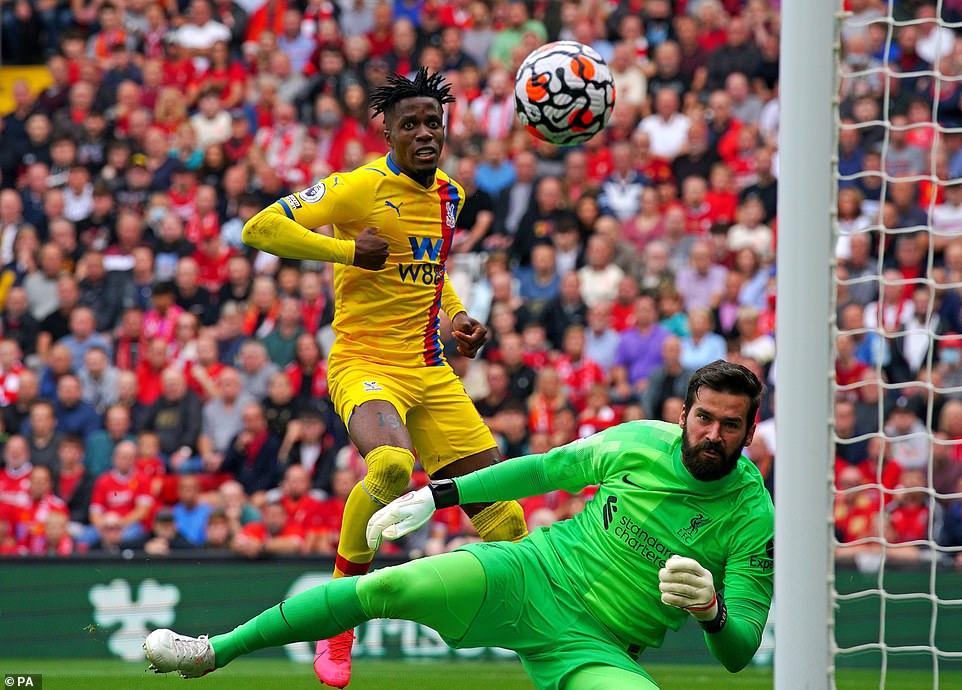 They should have made the breakthrough seven minutes before half time when a sumptuous move from Liverpool carved the Palace defence open at last. Thiago should have scored when he met a cross unmarked eight yards out but even though Guaita made a brilliant save to keep out his header, he could only palm the ball straight into the path of Jota. The goal gaped. Jota tried to ram his shot into the roof of the net but skied it high over the bar. Anfield groaned.

Palace breathed a sigh of relief but it was only a brief reprieve. On the stroke of the interval, Konstantinos Tsimikas swung over a corner from the left and Mo Salah peeled away from his marker at the near post. He glanced his header across goal towards the far corner and even though Guaita made another fine save low to his left to keep it out, Mane pounced on the rebound and lashed it back into the net.

Coming a week after Salah scored his 100th goal in the Premier League, this was Mane’s 100th goal for Liverpool. It did, though, set a new Premier League record: Mane’s goal meant he had scored in each of his last nine appearances against Palace.

Thiago limped off after 62 minutes to be replaced by Naby Keita and disconsolately waved away the commiserations of the Liverpool medical staff. As he departed, Palace brought on new signing Odsonne Edouard, one of the stars of Palace’s win over Spurs last weekend. 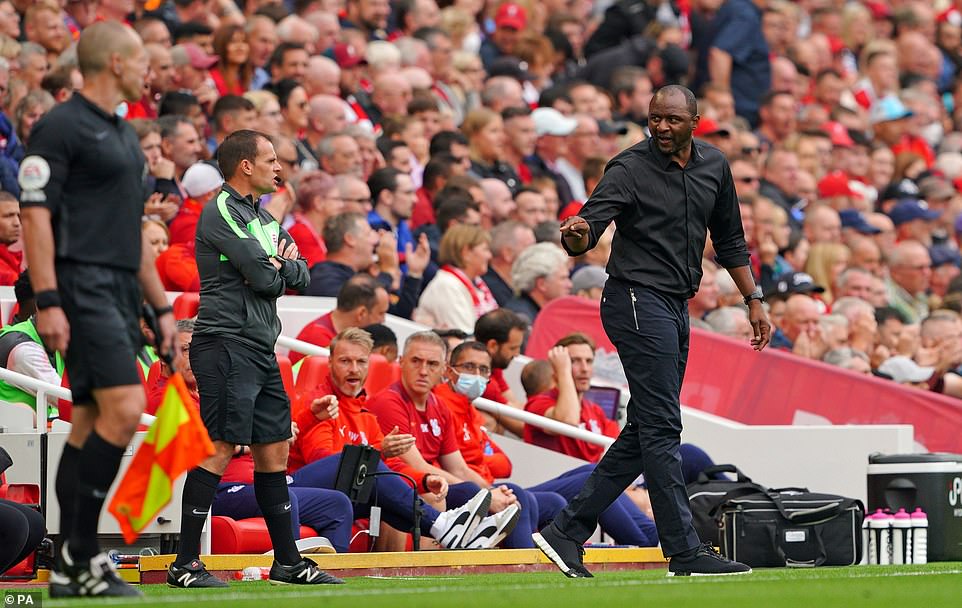 Patrick Vieira has brought belief back to Palace this season, but his team were ultimately left well beaten at the final whistle 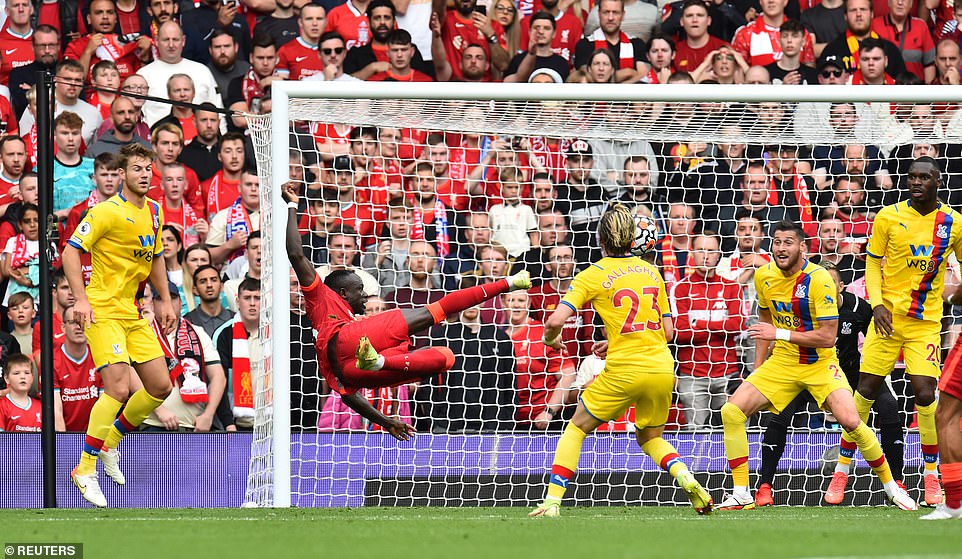 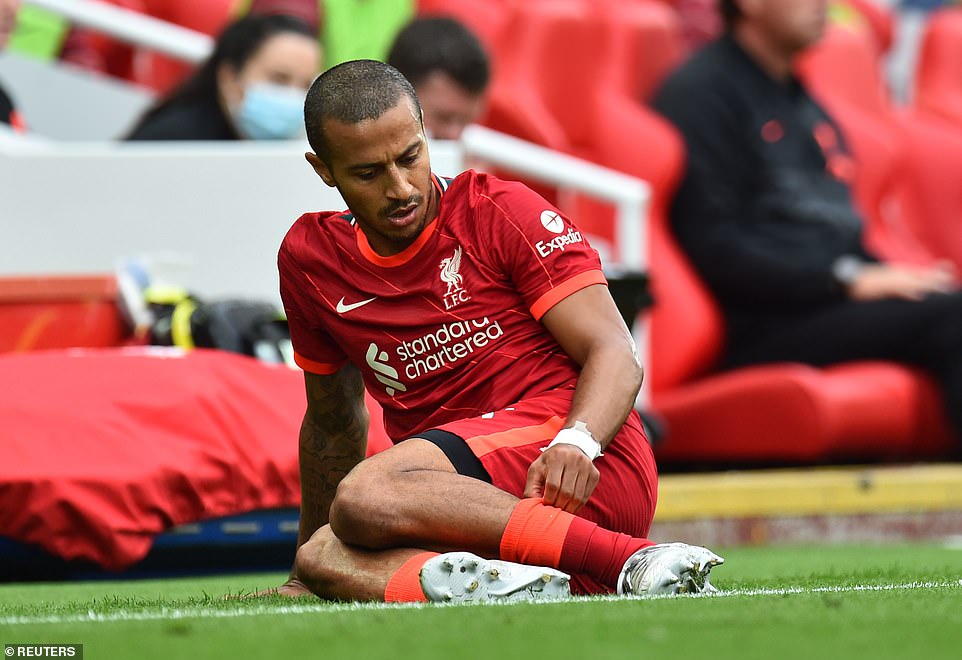 Thiago was forced off through injury in the second half, and was replaced by Keita, who later slammed in Liverpool’s third

Liverpool responded more quickly to the changes and nearly went further ahead midway through the half. Keita hammered in a shot from the edge of the area with such ferocity that Guaita could not hold it. It fell to Salah but when he tried to hook it home with his right foot, Guaita was there again to block it with his chest and deflect it out for a corner.

But a few minutes later, Edouard was presented with a golden opportunity to equalise. He ghosted in to the six yard box alone to meet a long cross from Joel Ward from the right but he seemed so surprised that he only had Alisson to beat that he failed to control the ball and it rolled tamely into the hands of the Liverpool goalkeeper.

Palace rued that missed chance almost immediately. Liverpool won a corner at the other end and when Jota swung it into the box, Van Dijk challenged for it in the six yard box and it dropped invitingly to Salah at the back post. Salah ran on to it and volleyed it left-footed past Guaita. He celebrated number 101 with even more gusto than number 100, ripping off his shirt in front of the Kop and earning the inevitable booking.

Liverpool knew the result was safe then but it did not stop them gilding their victory. When the ball dropped to him outside the box two minutes from time, Keita hit a dipping left foot volley past Guaita. Liverpool are top and they may not be easy to shift.