For the past month, Blue Sandford has been holed up in a muddy tunnel 15 ft beneath the ground, resisting eviction by bailiffs.

‘I put the crime in criminal,’ she defiantly wrote on her Instagram page alongside a selfie of herself and her brother Lazer huddled together in an underground chamber below London’s Euston station.

On Thursday, the 18-year-old, who is protesting against the HS2 rail link, finally gave herself up, emerging above ground alongside veteran eco-warrior Daniel Hooper, a man better known by the nickname ‘Swampy’.

Blue Sandford, pictured, who stayed in tunnels near Euston Station in London is the grand daughter of Texan model Jerry Hall’s sister

Even before her 30-day subterranean stay, Blue already had a formidable reputation as an environmental campaigner.

Dubbed the British Greta Thunberg, much has been made of her upbringing on a remote Hebridean island without cars, electricity or hot water.

And, as she states in Challenge Everything, her recently published book, she is resolutely opposed to anything that can harm the planet — from fast fashion to make-up to air travel. Her involvement in the HS2 protest will undoubtedly raise her profile further.

‘I’m going to carry on protesting with everything I have,’ she vowed this week as she was arrested by police. ‘Because I’m fighting for the lives of everyone I love.’

But while her personal philosophy and lifestyle may chime with her young supporters, it is fair to say that there are those in her close family who have lived very different lives to hers.

Because the Daily Mail can today reveal that Blue’s grandmother is Rosy Hall, older sister to the Texan supermodel Jerry Hall.

As for Rosy, when she was her granddaughter’s age she too was making headlines, but for very different reasons — more glamour, less grunge. 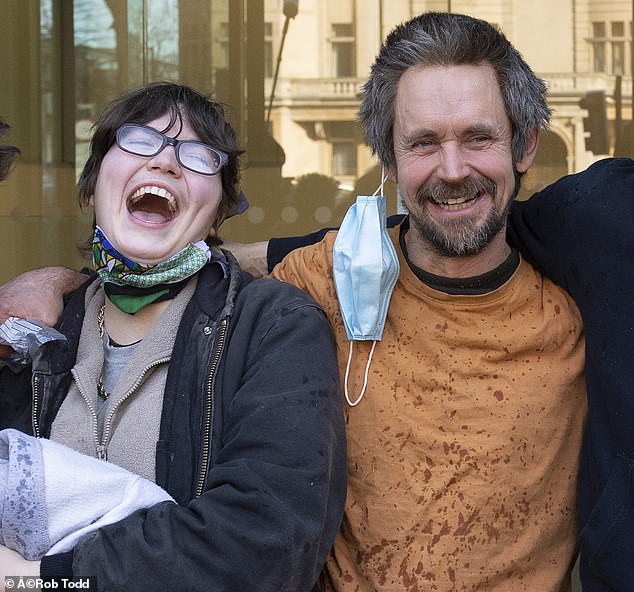 At the age of 19, Rosy was recruited to become a cheerleader with the Dallas Cowboys, a high-profile American Football team

The year was 1972 and the team’s president was looking for ways to encourage more ‘spirit’ amongst the fans. The answer? Hire a troupe of beautiful, dancing women dressed in halter tops, short shorts, and go-go boots.

The pom-pom waving cheerleaders would prove a massive hit, copied by other teams and turning the seven-strong group of women into the first pin-ups of modern sport.

In fact, such was their reputation that, 30 years later, they were reunited for a cover shoot for the magazine Sports Illustrated.

‘There was this feeling of being in the boys’ locker room,’ Rosy recalled at the time. ‘It was really unusual to have this large crowd of people screaming, so excited and whipped into a frenzy. It was quite fun, but you were slightly aware of sexual exploitation.’

In the years that followed, Rosy would go on to work as a model and actress. One of five sisters, she remained very close to Jerry and spent years living in Britain having moved to London in the 1990s.

While here she also worked as a fashion designer, telling a newspaper that she specialised in ‘goddess gowns and she-devil shawls’.

A divorced mother of two daughters, her youngest, Daphne, an artist, is Blue’s mother. 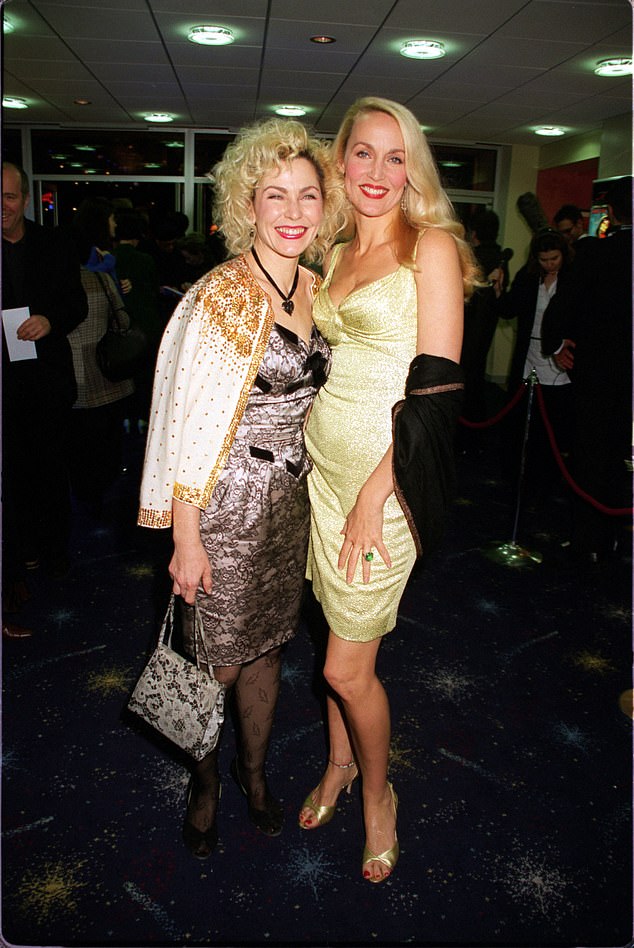 In 1998, Daphne had the first of her three children — Savannah — followed by Lachlan Blaze (known as Lazer) and Isla Bluebell (known as Blue). All were born in London.

Their father is Roc Sandford, who is himself a decidedly colourful character. Described as a ‘farmer’ on his children’s birth certificates, the 63-year-old is a wealthy landowner with a blue-blooded background.

Further back, his great-grandfather was the 5th Earl of Rosslyn while his aunt was the late racehorse owner Lady Serena Rothschild, wife of Jacob, 4th Baron Rothschild.

Having split from Blue’s mother some years ago, he divides his time between a London base and Gometra, a tiny Hebridean island that he purchased 30 years ago.

Determined to live an environmentally-friendly life, while there he washes his clothes in a bucket with his feet and fights off the cold by wearing multiple layers of clothing and cycling a lot. 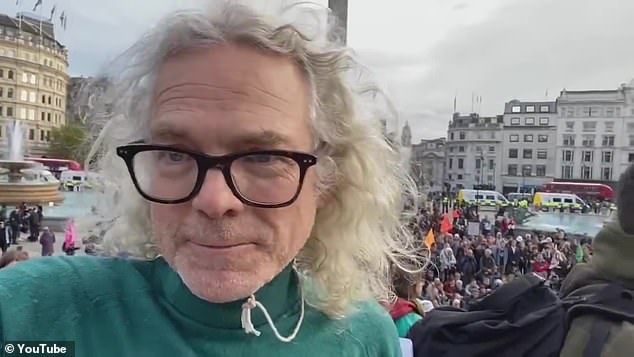 Roc Sandford, pictured in Trafalgar Square, London, is an aristocratic farmer and a decidedly colourful character

As His children grew up, they were regular visitors to Gometra and it was there that Blue got her first taste of environmental activism, helping her father oppose the construction of a salmon farm nearby. Aged 15, she then joined the youth section of Extinction Rebellion, protesting against a fracking exhibition in London.

Her 17th birthday was spent in a prison cell after she was arrested for blocking a road in Trafalgar Square as part of the ‘school strikes’ popularised by Thunberg.

Unlike others, Blue’s strike from school wasn’t just confined to one day a week. Instead, she has permanently absented herself from lessons at King Alfred School in Golders Green, North London, where fees are £6,686 a term.

‘It’s easier for me than most, as both of my parents are very supportive, but other people in my life don’t understand so much,’ she explains in her book. She also praises her mother for being a keen ‘scavenger’ and recycler. ‘My mum is almost magical in the way that she can find things by rummaging through charity shops or identifying unloved objects through friends, or even finding things on the street,’ writes Blue. ‘If you ask her for some trainers, she’ll find some in no time.’ 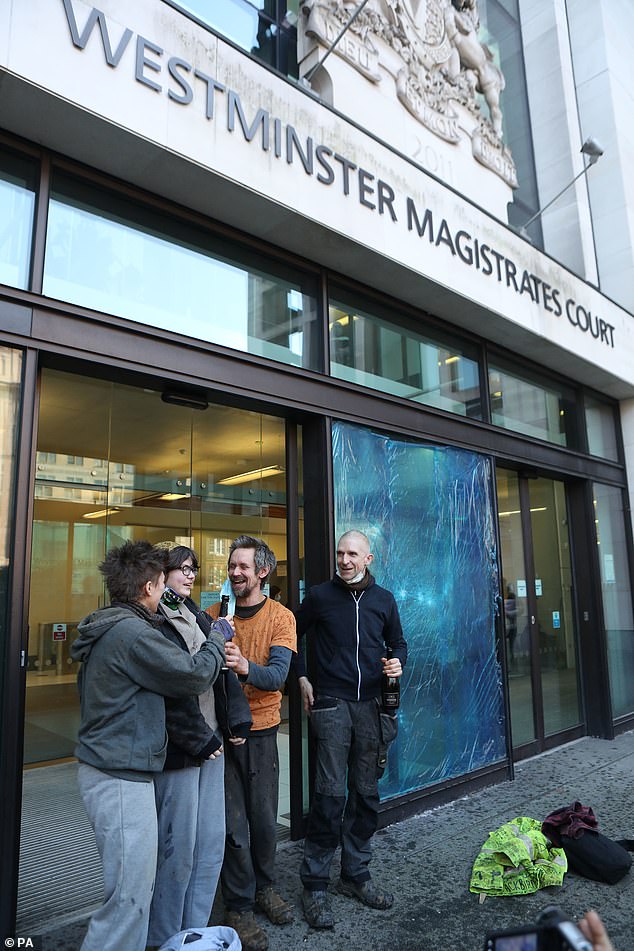 Blue, pictured, spent her 17th birthday in a police station having been arrested at an environmental protest

And she adds: ‘Last year, my mum pioneered hot water bottles that she makes from our old moth-eaten jumpers.’

Writing on social media, Daphne makes clear how proud she is of her children’s actions — as well as her concerns for their safety.

Last July, she posted about an anti-HS2 protest they were taking part in at Denham Country Park on the western edge of London.

‘It truly & deeply breaks my heart that this is what my children need to do to fight for the aquifer that supplies londons drinking water!’ she wrote. ‘Why aren’t more Londonders in the woods standing & supporting these children? Don’t you want to have clean drinking water? Does anyone even care???? The children are risking their lives they need support.’ [sic]

In another post she is pictured wearing what appears to be a hat made out of an entire fox fur, including the head.

When challenged about the choice of garment she replied: ‘I’m actually American Indian on both sides. It’s my aunt’s and I tried it on for a picture and have made it my profile to project some ancestor protection around my children while they are revolting for the future of their planet, if you must know.’

Intriguingly, that is not the only thing that she appears to have received from one of her aunts. The house in which she and her children live, in West London, was purchased for £715,000 in 2010.

Publicly available Land Registry documents list three individuals as its registered owners, one of whom is Jerry Hall. A source told the Daily Mail that they understood the property had been purchased by a trust of which Jerry Hall was a trustee.

In the latest action, Blue and her brother joined activists protesting at HS2 plans to destroy Euston Square Gardens to build a temporary taxi rank for the adjacent station.

When bailiffs attempted to clear their camp, they moved in to a 100 ft tunnel which they had been secretly excavating under the streets of London since November.

The conditions below ground prompted concerns for their safety with reports of oxygen shortages and soil collapses. ‘It’s been cold since the eviction team brought in a huge compressor and sent a hose down blasting air along the tunnels,’ Blue told reporters, speaking by phone while underground. ‘We’ve got lots of sleeping bags, though, and we’re taking it in shifts, with some sleeping, others awake having some food.

‘We have enough stores to last six weeks. I’m surviving on rice and tins of jackfruit, as well as pastries and other stuff collected from skips.’

After spending 11 days underground, 20-year-old Lazer handed himself in to police in exchange for supplies, including hygiene and sanitary products and lights for the remaining protesters. He was granted bail on condition he does not interfere with the workings of any HS2 site.

Blue stayed put, only emerging this week, leaving a sole protester underground. After undergoing medical checks, she was arrested by police for aggravated trespass.

Meanwhile back at the family home, Blue and Lazer’s mother praised the ‘kids’ for taking risks in order to help others. She told the Daily Mail she did not want to talk about her wider family as it would ‘take away from the young people’s message’.

Mr Sandford has also spoken of his concern for his children. ‘I am always begging them to be careful and I sometimes feel like I am going to collapse with fear, but I am also so proud of what they are achieving,’ he said.

As for Blue’s glamorous 67-year-old grandmother, even with the protest at an end, the pair are unlikely to see each other face to face for some time.

‘My mum’s from America and her family still live there,’ Blue wrote in her book. ‘We visited them once or twice when I was a baby, but we stopped going when I was a toddler because we couldn’t afford it.

‘A few Christmases ago though, we went to Texas because I didn’t remember my granny. I was willing to sacrifice a flight’s worth of carbon to meet her and I would probably make the same decision now. It’s really hard to make these judgment calls, however, because you can end up just justifying everything.’