Litter army goes into battle: Volunteers get stuck in as the big clean-up of Britain starts TODAY

I’ll give you a little hand: Litter pickers in Crawley during last year’s drive

Volunteers across the country are today rolling up their sleeves to wage war on litter as the campaign to clean up Britain kicks off.

Armed with litter-pickers, bin bags and gloves, they will comb countrysides, beaches and streets as part of the Great British September Clean, backed by the Daily Mail.

The campaign, organised by Keep Britain Tidy, was due to run in March but had to be postponed due to the coronavirus pandemic.

Six months on the campaign is going ahead while sticking to Government guidelines to prevent the spread of coronavirus.

Groups of no more than six will litter-pick together while maintaining social distancing at all times and using the correct equipment.

Shocking pictures have shown that in recent months litter has become an enormous blight on the nation’s beauty spots. 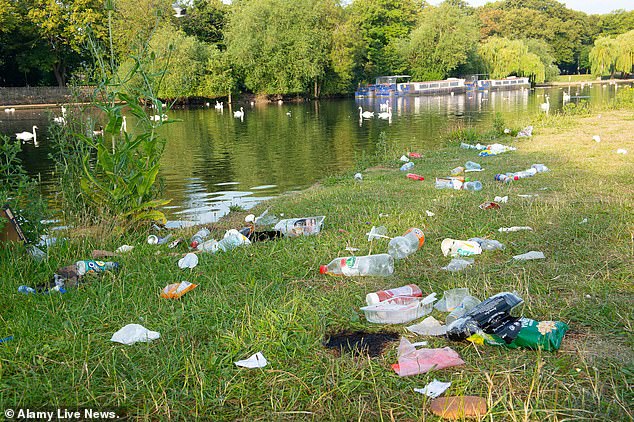 A shop worker aged 61 and a 15-year-old schoolboy have become firm friends as they battle the scourge of litter.

Neighbours Julie Taylor and Ben Thornbury have set up a thriving clean-up group. Aspiring conservationist Ben, of Malmesbury, Wiltshire, said litter-picking had helped to keep their spirits up through the pandemic.

He recalled: ‘Around four years ago, Julie asked me if I wanted to help her clean out a hedge near our homes which was filled with so much litter. So we cleaned it all up then posted it to our local Facebook page and we got loads of positive comments so we just decided to keep it going.’

Ben said the pair spent time together nearly every day and mostly chatted about ‘conservation and photography’.

Julie, who works in a Clarks shoe shop part-time, added: ‘The message we are trying to get out there is that everybody can get along no matter their age.

‘When the younger generation come together with the older generation we get on so well. Ben is very caring – I’m proud to call him a friend.’ 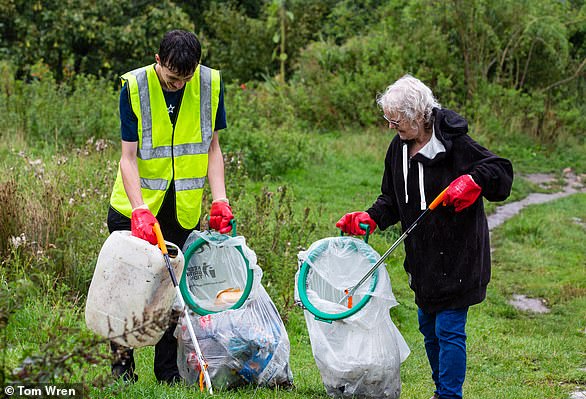 A shop worker aged 61 and a 15-year-old schoolboy have become firm friends as they battle the scourge of litter. Neighbours Julie Taylor and Ben Thornbury have set up a thriving clean-up group

From the countryside to the coast, thoughtless people have left piles of waste and plastic while meeting up with friends and family outdoors as lockdown restrictions began to ease.

A survey this year found that a fifth of people admitted dropping litter during the lockdown and almost half of 18 to 25-year-olds said they had dumped rubbish in streets, parks and rural areas.

Now is the chance for you to get involved in the bid to make Britain beautiful again.

The campaign has already been backed by everyone from Prime Minister Boris Johnson to the Wombles of Wimbledon, who came out of hibernation to help encourage the nation to get involved.

All 22 senior Cabinet ministers have pledged to take part and the 364 Tory MPs have been urged to do their bit.

Wildlife TV presenter Steve Backshall has given his backing to the Great British September Clean.

The naturalist, 47, is encouraging everyone who cares about the environment to take part.

Backshall, who is a Keep Britain Tidy ambassador, said he had ‘seen first-hand’ the impact of litter on the environment. ‘By coming together and all doing our bit we can change things,’ he said.

Jaguar Land Rover has asked its workforce of around 38,000 to get involved, while the Post Office and Countryside Alliance have also pledged to take part.

Keep Britain Tidy has called on Mail readers once again to pitch in.

Richard McIlwain, deputy chief executive, said: ‘We are delighted to be back now – albeit in a slightly different way to make sure everyone stays safe – and we want as many people as possible to pledge to pick.

‘As little as 15 minutes of litter-picking, whether while walking the dog or walking the kids to school, makes a big difference.’

When the Mail announced the campaign was to go ahead, Mr Johnson said: ‘I wholeheartedly support the Mail’s public-spirited campaign. While continuing to follow distancing rules, we can all play our part by rolling up our sleeves and joining in the Great British September Clean.’

The 2019 clean-up effort was the biggest ever mass-participation environmental campaign when volunteers tidied the equivalent of 239,344 wheelie bins of rubbish – nearly 20 per cent of which was plastic bottles.

The Mail has mounted many successful environmental campaigns including Turn the Tide on Plastic and Be a Tree Angel.