By Mj Bergin For Dailymail.Com

Lisa Hochstein shared a stunning photo showing off her incredible body in a skimpy bikini on Instagram on Sunday.

The 40-year-old beauty posted the photo amid a nasty divorce with her estranged husband, plastic surgeon Lenny Hochstein, 56.

She glowed in the golden hour sun while wearing a revealing brown weaved bikini top with black bottoms and a matching brown cover-up that tied around her waist.

Golden beauty: Lisa Hochstein showed off her perfect physique in a skimpy bikini on Instagram on Sunday 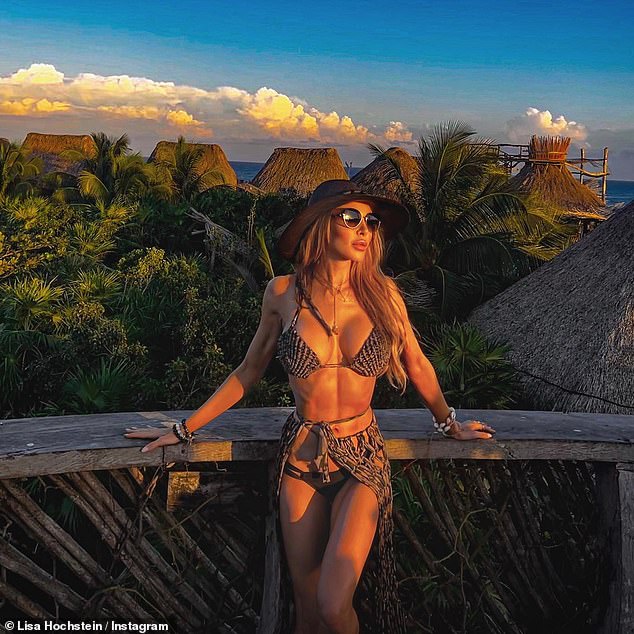 The bigger picture of her story: There were straw huts behind her and dense clouds

For accessories, she wore several bracelets, including one made out of puka shells, a few thin necklaces, sunglasses, and a hat from Artesano.

The Real Housewives of Miami star captioned her post: ‘Those who look behind will never see beyond.’

This post and several others from the past week were shared after Lisa called her ex ’embarrassing’ online last week.

She took to her Instagram story to ask Lenny to stop dragging her online after he claimed she treated him like a ‘servant’ and yelled at him ‘weekly if not daily’ during their 12-year marriage. 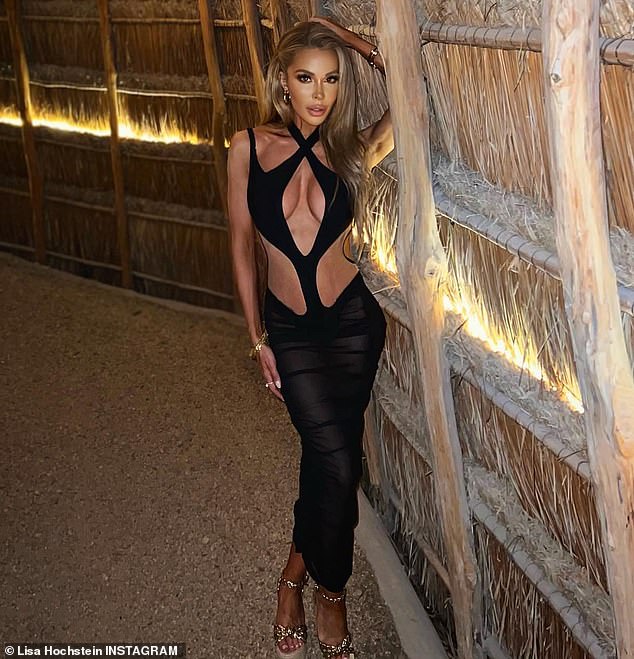 Toned torso: The 40-year-old bombshell shared several revealing photos while in the middle of a nasty divorce with her estranged husband, Lenny Hochstein, 56 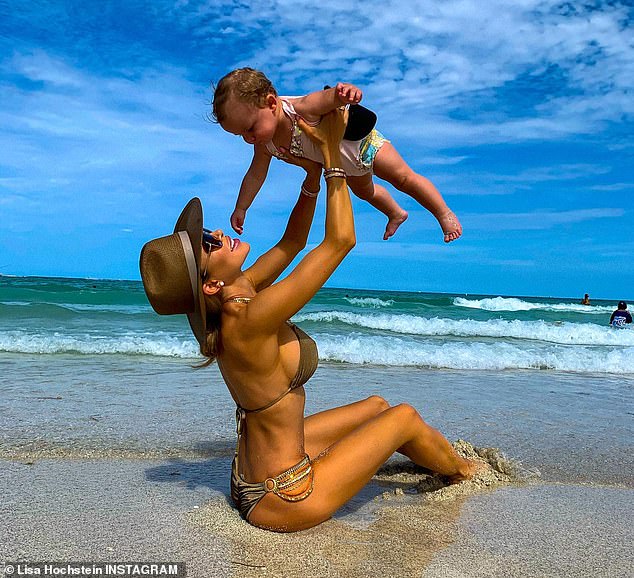 Just girls: The Real Housewives of Miami star posted a throwback photo with her daughter Elle after calling her ex ’embarrassing’ on social media

In his post, he said, ‘[She] established a life completely away from me, stayed out partying when I was home, criticized everything I did (except working hard).’

The pair began dating in 2007, and after two months, Lisa moved to Miami to live with Lenny. He proposed six months later, and in 2009 the couple tied the knot.

They made their debut on the second season of the Real Housewives of Miami in 2012. Following their entrance onto the show, they had their first child, Logan, in 2015 and their second, Elle, in 2019, both via surrogate. 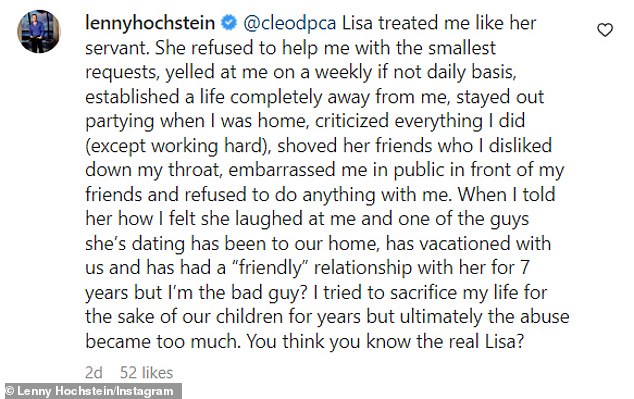 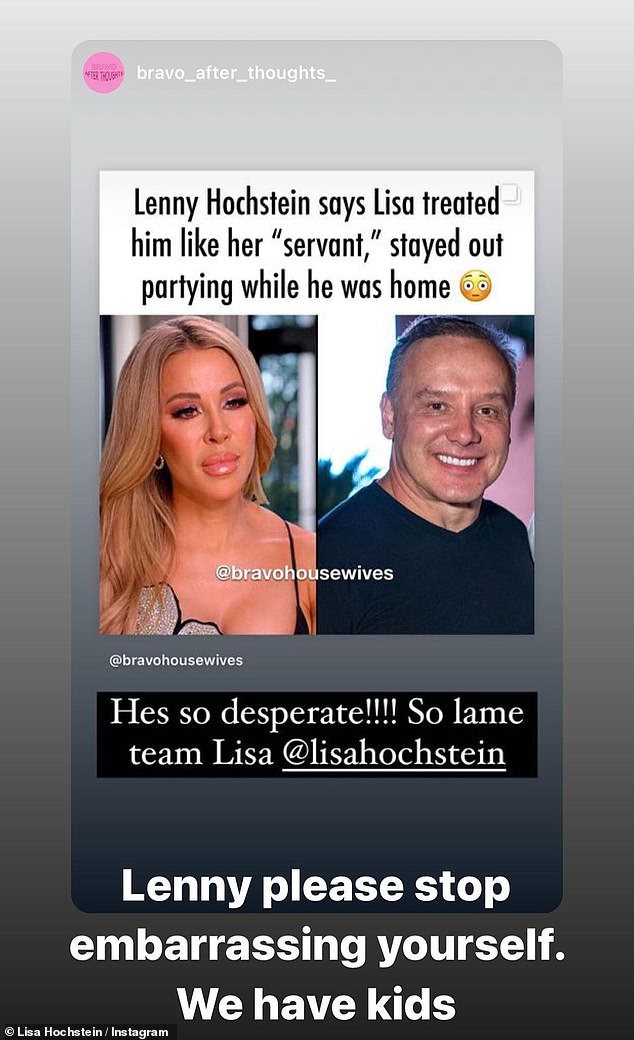 Her thoughts: Lisa responded to Lenny’s claims and reminded him that they have kids, Logan, seven, and Elle, three

In 2022 the couple confirmed their divorce, and a source for Lisa told PEOPLE: ‘With two young children involved, as a mom, I’m going to focus all of my energy and time on them. I’m blindsided by his behavior and reckless handling of the situation.’

Page Six first reported the news after the famed plastic surgeon confirmed the divorce over the phone.

‘Lisa and I are getting divorced. A few weeks ago, I denied this because I am trying my best to protect my family during this process.’ 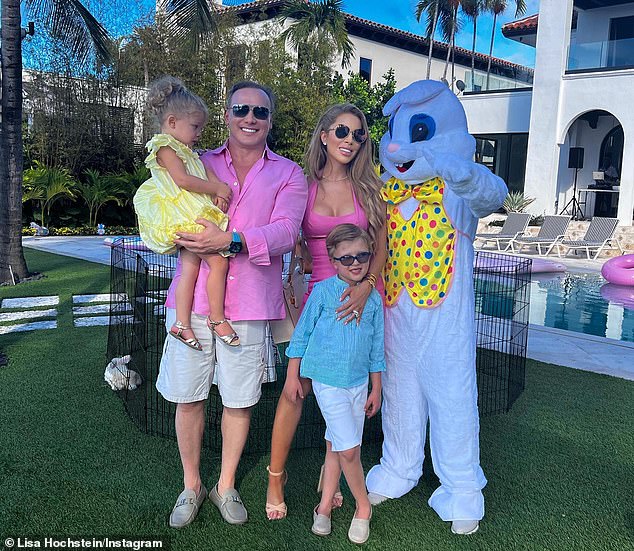 Family ties: Lenny confirmed the pair’s divorce in 2022 and at the same time confirmed his relationship with 27-year-old Austrian model Katharina Mazepa

He continued: ‘This is a very difficult time, and I would ask for some privacy so that we can best take care of our children, who mean the world to us.’

Lenny also confirmed at the same time that he had begun dating Austrian model Katharina Mazepa. Still, he claimed ‘none of this happened until after the decision was made to get divorced.’

Lisa was recently seen out on New Year’s Eve with her rumored new boyfriend, Jody Glidden.