Wise co-founder Taavet Hinrikus says he had never bought shares in a publicly-listed company, despite being a prominent angel investor and leading one of the UK’s most valuable companies.

However, this morning the Wise chairman claims he has changed that with his first trade with Lightyear – a new DIY share investing platform in which he is an investor.

Today it will start allowing users on its waiting list to start trading, as it aims to go head-to-head with the leaders of the upstart pack – such as eToro, Freetrade and Trading 212 – challenging established DIY investing platforms, such as Hargreaves Lansdown, AJ Bell and Interactive Investor.

Lightyear is another commission-free stock trading app coming to market looking to capitalise on the rise of DIY investment platforms.

It will only offer the ability to invest in shares and does not give customers access to high-risk CFD trading.

It was largely born out of Sokk and Aamer’s own frustration with the current market, particularly the pricey currency conversion fees.

After working on removing some of the barriers associated with sending money abroad at Wise – previously known as Transferwise – Sokk and Aamer now want to apply the same principles to investing.

‘Having spent my career in financial services, I’ve seen the good, the bad, and the ugly.

‘I believe retail investing in Europe is still very much “the ugly,” Sokk has said previously. 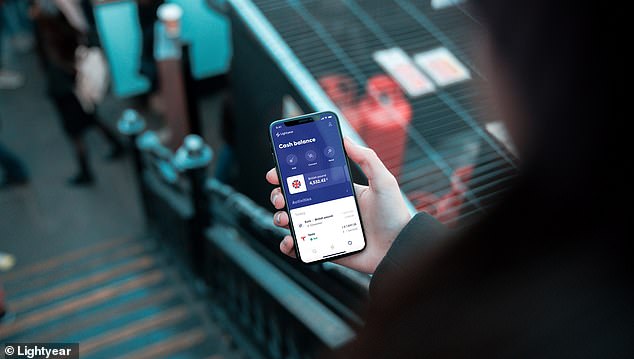 Lightyear users will not be charged for foreign exchange fees up to £3,000 per month

For Hinrikus, this lack of transparency is precisely what has put him off buying shares in the past.

‘While I have made plenty of private investments, I have never bought a public stock in my life.

‘Part of that is because it has never simple enough for my liking,’ he says.

‘When Martin and Mihkel Aamer came in and told about their plans for Lightyear, I thought to myself maybe now it’s time to start investing in public stocks, so I’m going to make my first trade on Lightyear.’

Like the Wise co-founder, this new generation of investors is increasingly attracted to big name US shares like Amazon and Tesla, but the currency conversion means they are faced with hefty charges on already pricey stocks.

Users, it says, will not pay account or trading fees and, unlike the majority of rival trading apps, foreign exchange charges. After £3,000 per month, users will have to pay 0.35 per cent in FX fees.

‘We are building an investment app with Europe in mind.

‘We have so many different currencies and countries in Europe, so having a good solution for FX is incredibly important and something that nobody has done before for investing,’ says Sokk.

‘Our multi-currency accounts allow people to deposit, hold and invest in multiple currencies, removing the need to be constantly converting your money back and forth which creates extra costs.’

Like its rivals Freetrade, Trading212 and eToro, Lightyear will give users the chance to buy fractional shares – a piece of a share rather than one or more whole individual stocks.

‘A high individual share price shouldn’t be a barrier to entry when it comes to building a portfolio.

‘We’ve removed all the transaction costs as well, which encourages people to diversify their portfolios through fractional trading,’ adds Sokk.

Lightyear has clearly tapped into a demand for unfettered access to global stocks as newer investors look to diversify their portfolio.

More than 5,000 people have signed up to its waiting list which it launched just three months ago.

From today it will start allowing users the chance to trade more than 1,000 global stocks.

The buzz around Lightyear and its claim to shake up Europe’s investment market has seen the team raise $10million from some of the industry’s biggest players.

Following an initial $1.5million pre-seed round led by Hinrikus and Teleport co-founder Sten Tamkivi, the Lightyear team has secured a further $8.5million.

The round was led by Mosaic Ventures alongside existing investors and a handful of angel investors including early Monzo backer Eileen Burbidge.

‘When it comes to investing in an early-stage business, it’s crucial that the team is best in class, that I believe in the sector, and the product has global appeal.

‘We’ve seen more and more people interested in retail investing over the past year and a half, which, combined with this highly motivated, extremely talented and high integrity team, makes for something special,’ says Burbidge.

‘I’m excited by Lightyear’s commitment to transparency and building a platform that’s approachable and inclusive, where everyone has the best access, tools and confidence to invest.’

The vote of confidence from such seasoned investors will certainly be welcome but it’s still early days for Lightyear.

With plans to expand into Europe next year, Lightyear will have its work cut out competing with well-established platforms which have benefited from the pandemic spike.

The age-old question of whether it can make any money will also be crucial.

For now Lightyear is focused on building its customer base, but the founders have said they will look at a subscription model for access to more tools, news and more sophisticated products.

It says its standard investment account will always remain free.

When it comes to choosing an investment platform, stocks & shares Isa or a general investing account, the range of options might seem overwhelming.

Every provider has a slightly different offering, charging more or less for trading or holding shares and giving access to a different range of stocks, funds and investment trusts.

When weighing up the right one for you, it’s important to to look at the service that it offers, along with administration charges and dealing fees, plus any other extra costs.

To help you compare investment accounts, we’ve crunched the facts and pulled together a comprehensive guide to choosing the best and cheapest investing account for you.

We highlight the main players in the table below but would advise doing your own research and considering the points in our full guide linked here.